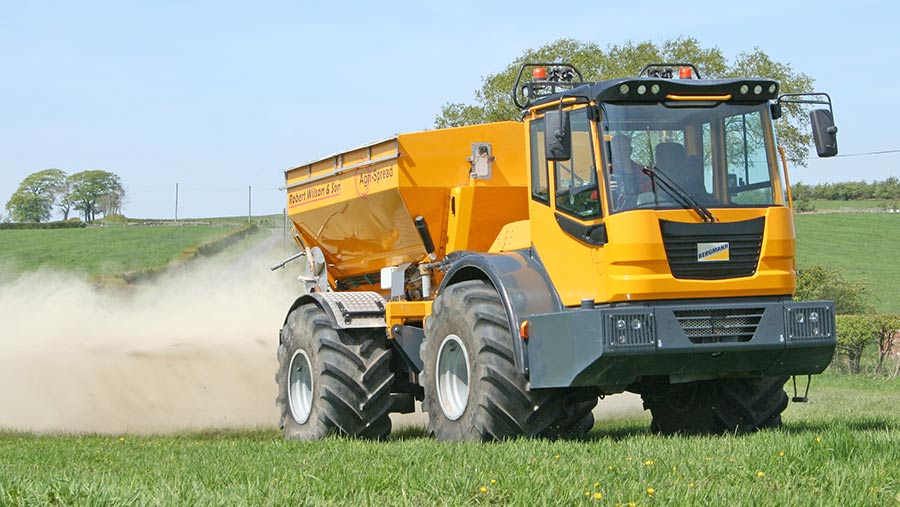 The Bergmann/Agri-Spread outfit operates at up to 26kph when conditions are ideal – rather less than that when working steep banks on the fells.

A bespoke lime applicator made from a combination of Bergmann tractor unit and Agri-Spread body has vastly increased spreading output for Ayrshire contractor Robert Wilson & Son.

Mr Wilson says it has revolutionised the lime spreading job, having started contracting 40 years ago with a Ford 7600 tractor and 2.5t Atkinson trailed spreader.

An OnTop, two Clayton Buggys and a trio of Multidrive self-propelled spreaders followed as things progressed, and now the operation runs a Bergmann three-way dump truck converted from earth moving duties to lime and fertiliser application with the addition of an Agri-Spread body.

“With the tractor and spreader, I managed about 1,000t a year of lime application,” Mr Wilson recalls.

“Today, with the new self-propelled machine, plus some peak-time spreading with a trailed spreader, we’re doing up to 20,000t in a very busy year.”

Robert Wilson & Son is based on a site that has been a lime depot for more than 70 years at Burnhouse, near Beith in north Ayrshire, half an hour south-west of Glasgow.

It’s is a partnership between Mr Wilson and his wife Mary, and their son Robin who manages operations with administrative support from his sister Jennifer.

In addition to lime spreading across a large territory throughout south-west Scotland, the business prepares moist cattle feeds at the company’s UFAS-accredited site that is delivered by the company’s own eight-wheeler and artic trucks.

These then collect lime as a back-load whenever possible from quarries in the north of England up to Fort William on the west coast of Scotland.

“There’s usually no need for magnesium, so we normally supply and spread calcium limestone in fine and coarse grades, which we store here ready for use, although magnesium lime can be supplied if needed,” explains Robin Wilson. 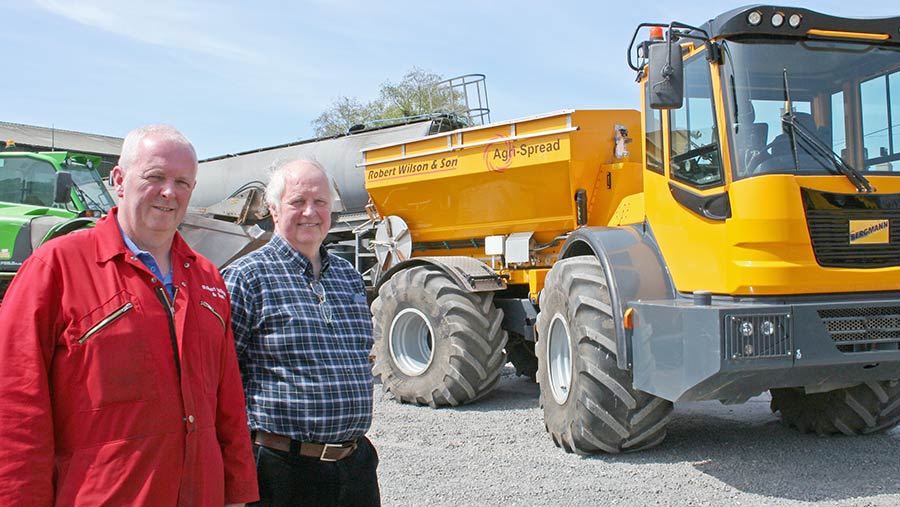 “It’s very seasonal work, with lime going on grass and ahead of barley sowing throughout the spring when we hire in a tractor and operator to work our trailed Agri-Spread to keep on top of things.

“In the second half of the season, it’s liming for grass re-seeds, when we might get a couple of days’ notice to spread between ploughing and sowing, or even jobs to spread on the day.”

There is a sizeable amount of arable production into south Ayrshire with a lot of cereals grown for wholecrop harvesting, but grass is the predominant crop in the area, either dairying on the rolling landscape or beef and sheep on upland pastures.

“Dairy farmers do recognise the value of maintaining the correct pH balance and the potential for losing about a third of the value of any fertiliser they put on when the land becomes too acid,” says Robin.

“But it’s usually the first thing to defer when finances are tight, so annual demand can fluctuate quite significantly from maybe 15,000 to 20,000t.

“For that reason – and also because finding reliable, skilled labour is not easy – we like to keep things simple. I drive the spreader, we have a lorry driver and mechanic in the workshop, and one seasonal operator for the trailed machine.”

The Bergmann 3012 DSK operated for the past two years is part of a fully self-contained unit, using a farmer’s own loader on small jobs but towing a Merlo Panoramic P32.6 telescopic handler on a Chieftain low-loader for everything else.

“The Merlo is quite a light machine for its 3.2t capacity and using a front tip bucket so I don’t have to keep extending and retracting the boom makes it quick to load the Bergmann’s 7.5cu m Agri-Spread hopper in about 90 seconds,” explains Robin.

“I also have a bucket brush to clean up and spread every bit of limestone to the land, whether we’ve tipped in the field or on a hard-standing at the farm buildings.”

The new spreader, he says, handles its load just fine, whether towing the trailer and telehandler at up to 40kph on the road or carrying 11t of limestone in the field. 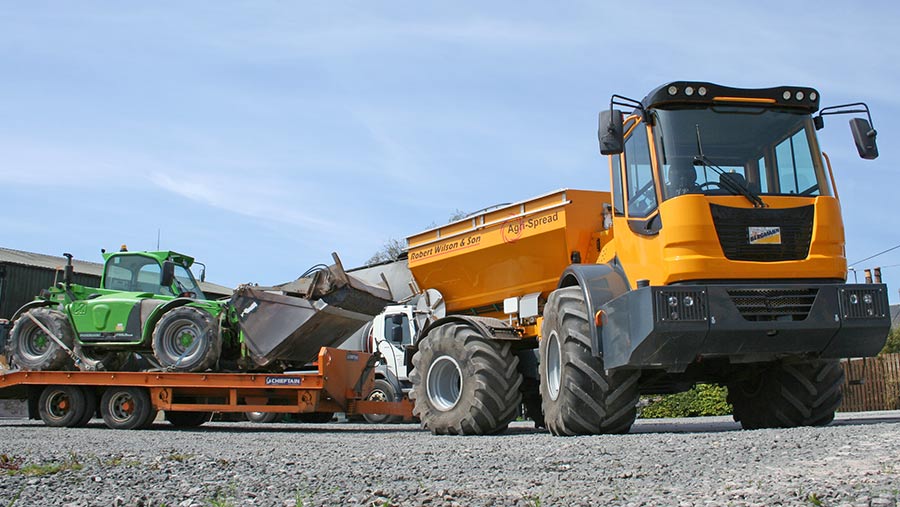 Robert and Robin Wilson are advocates of self-propelled spreaders – certainly in their working situation – for traction and stability.

“With a tractor and trailed spreader, you’re pulling a dead weight; with a self-propelled machine you’re carrying the load and benefit from the weight in terms of traction in poor surface conditions,” says Robert.

Similarly, when conditions are soft, a half-loaded self-propelled unit with decent tyres has good flotation.

“We’ve had situations when we’ve sent in the Bergmann to finish a job where conditions have become borderline for the tractor and trailed spreader,” says Robin.

“This particular machine, being articulated, is very manoeuvrable, more so than the Multidrives we ran before, and it really makes a difference when you’ve a narrow gateway off a lane to keep driving through.”

Having run three 185hp Multidrive vehicles in succession, he is quick to acknowledge its attributes:

“It’s a nice tight machine with a good chassis and a smooth ride from having both axles on coil spring suspension, all of which makes it a great option for spreading on flat, open arable fields.

“But for our workload, and especially on the hills, the suspension and the machine’s height bring stability into question.

“And while the chassis has been fine, we’ve had to keep a close eye on the suspension components because of the forces they undergo working on steep ground.”

The Bergmann overcomes those shortcomings, he says, thanks to the rear axle being mounted rigidly on to a strong articulated chassis where a rotating centre pivot damped by a pair of hydraulic cylinders helps with the stability issue.

Up front, a full-width cab provides good visibility and two full-size seats – handy for taking customers to view the application site and the job being done – plus the ride comfort benefits of leaf spring suspension for the front axle.

The Bergmann 3012 DSK, sourced from Kattrak International (conveniently just a mile up the road from the Wilsons’ base), serves up 160hp from a Cummins B Series 4.5-litre four-cylinder engine.

It drives through a powershift ZF Ergo-Power transmission, with manual shifting used in the field and auto shifting for driving ease on the road.

Bergmann’s patented ‘beetle wing’ engine covers give access for routine servicing – they swing out and upwards from both sides to fully expose the engine, transmission, hydraulic pump, and so on.

With six forward ratios and three for reverse, there is a decent spread of speeds for travelling to and from sites at up to 40kph and for working in the field at up to 24kph when conditions are ideal.

Gear shifts and forward reverse selection are made using thumb-operated roller switches on the face of a joystick that in the machine’s usual role operates a 4.2cu m (8cu m heaped) three-way tipper body but in this case has no other function.

Rocker switches also mounted on the seat armrest engage the parking brake, select cruise (effectively an electronic throttle) and select 2/4-wheel drive, with another switch on the instrument panel selecting the auto and manual shifting modes.

Two remote camera displays show the hopper contents and what’s going on behind the machine, and the cab houses a Topcon X25 terminal that provides Isobus control, visual 12-14m bout guidance for liming and 24m for fertilisers.

The X25 also regulates the hydraulically driven hopper belt for speed-related and variable-rate applications, and provides mapping functions if customers want them.

Choosing the three-way tipper version of the Bergmann – there are also rear-tip and swivel tipper variants – provided four convenient mounting points for the purpose-built body supplied through Dales Agri-Sales and installed at the Agri-Spread works in Co Mayo, Ireland.

“The body is made from stainless steel so should be fit for our next machine and the tipper mountings make it easy to convert the machine back to a dumper when it comes time to sell, perhaps in five years’ time,” says Robin Wilson. 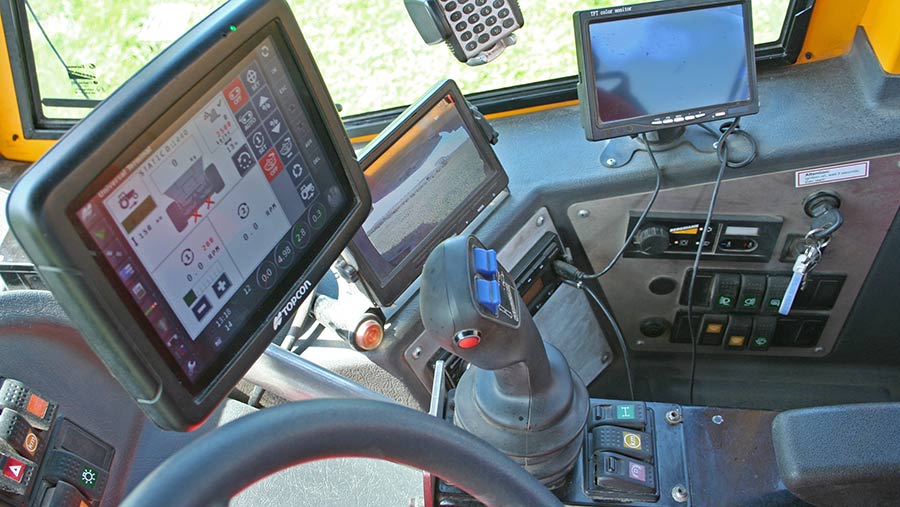 Topcon X25 terminal provides visual bout guidance, isobus control and mapping functions if required; video screens show hopper level what’s behind the machine; transmission shuttle and powershift roller switches are on the joystick, which has no other function but is normally used to tip the dumper body

“However, the outfit has been so successful that if we did another, I think we’d cut the mounts off to get the body another six to eight inches lower – it’s not overly high as it is but for our hill work, getting everything as low as possible is a good thing.

“It’s not so much the overall height that’s important as the height of the belt because that determines the centre of gravity and the machine’s stability,” he adds.

“We’d also look at extending the hopper a bit further at the front to get the same capacity with a slightly lower fill, and a bit more outright capacity when stability isn’t an issue.”

As it is, the Bergmann/Agri-Spread combination takes an 11t payload, so there is a significant capacity advantage over the 8t carried by the Multidrives operated previously.

Apart from reducing the number of return-to-heap fills, this is also a better match for the 20t and 28t heaps of limestone delivered to the field.

“Overall, we’re really pleased with this machine,” Robin Wilson concludes. “We’ve had no issues over the past 24 months when it’s clocked up 2,100 hours in total and will run to 1,500 hours a year.

“It sits on the road well, it’s not too heavy, and is quite solidly planted in the field, especially when loaded. So far, it’s proven ideal for our needs.”