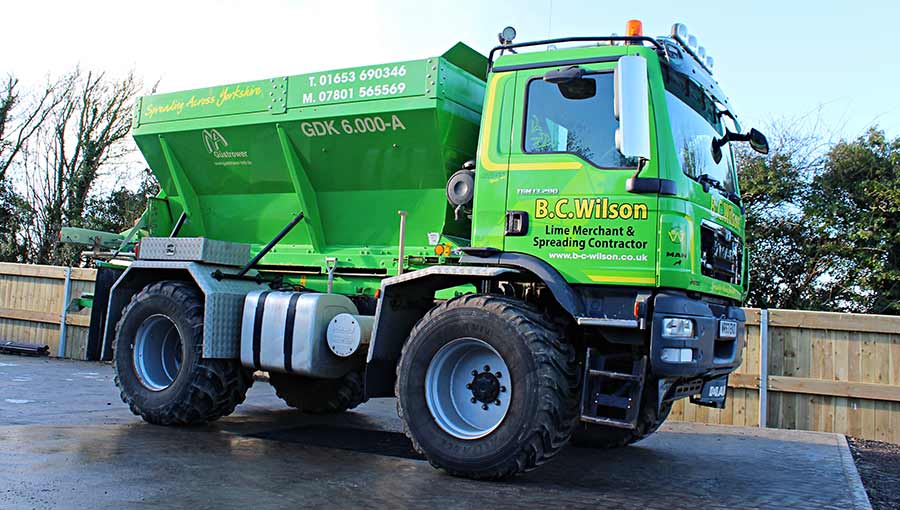 For specialist spreading contractors there’s a lot to be said for running a self-propelled machine rather than a tractor and trailed unit.

Not only does it make the machine more compact and easier to travel long distances, but it gives the flexibility of being able to tow a telehandler behind on a low-loader for easier filling.

Yorkshire-based lime and fertiliser specialist Bruce Wilson has used this setup for years, running a Mercedes Unimog and KRM Bredal spreader with a Caterpillar TH62 hooked on the rear.

However, when he came to upgrade the outfit two years ago he opted for a higher-capacity machine based on an MAN truck with permanent four-wheel drive.

The so-called Ryetrac is constructed by Malton-based engineering firm Ryetec and has a 10t Gustrower spreader mounted on the rear.

This particular machine was built in 2013 and spent its first few years in Suffolk with spreading contractor Rob Cutting. However, in 2017 it made its way back up to Yorkshire and into the hands of Mr Wilson.

We caught up with him to find out how it’s been performing.

Why did you choose the Ryetrac?

I knew the price of a new one was going to be high so when Mark Harrison at Ryetec told me he’d got the Ryetrac back in I was tempted to give it a go.

Not only was it a cheaper option, but it could carry 10t in the hopper as opposed to the 7t I could just about squeeze in the KRM K65 I had on the Unimog.

The capacity is a bit higher than standard due to factory-fitted greedy boards, which up it to 8.5cu m.

It was being offered for £85,000 with about 2,500 hours on the clock, which I thought was a fair price for a machine like that.

Another decider was a demo I’d had of a trailed Gustrower spreader the previous season. We piled it right to the top with some very wet lime and the chain and slat floor managed to wind it all out without any problems. Some of the rubber belt machines would have struggled.

What have you spread with it?

During that time it’s spread about 20,000t of lime plus a fair bit of granular fertiliser, Fibrophos, Kalfos, P Grow, gypsum and slag.  The spreader is set up for variable rate spreading and about 75% of the products are put on this way. 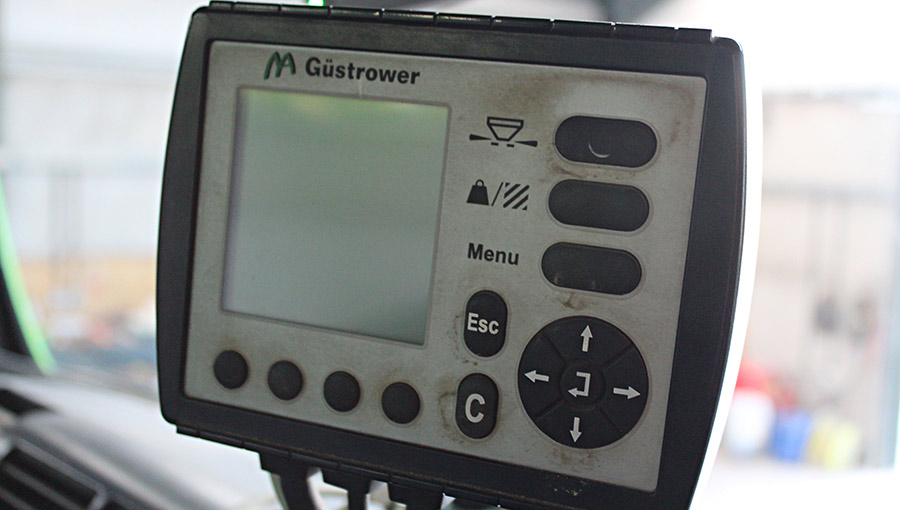 The controller is capable of variable rate application

One of the main things I’ve noticed is how much more productive it is than the Unimog. The extra 3t capacity significantly reduces filling time and the smooth ride means I can comfortably spread at 18kph, even on rough worked ground. On average my output works out at about 30t/hr.

Fuel consumption is lower too, averaging about 15 litres/hr, but this does creep up a bit on really hard going. It’s also quicker and smoother on the road and I really notice the extra 50hp.

The only area where it can’t compete is on steep ground. Firstly it’s heavier and more ungainly, but also the automatic gearbox doesn’t give me the confidence I had with the old outfit’s manual setup.

As a result all the hilly work is done with my trailed KRM spreader, which a local contracting friend pulls for me.

Despite the four-wheel-drive system and diff-locks I have managed to get it stuck a few of times. However, on most of these occasions the ground was so wet that most vehicles would have sunk.

The Gustrower spreader has been particularly good too. I’ve never managed to block it and it spreads evenly, even when I applied some granular fertiliser at 36m (most is still at 24m).

The only thing we have found is that particularly wet lime will go though in lumps and cause a slight pulsing effect on the spread pattern.

To get round it, Ryetec fitted some tines at the rear to help break up the material before it drops on to the discs.

We had a few too many tines on there at the start and they interrupted the flow, but now I’ve got just two and they work well. 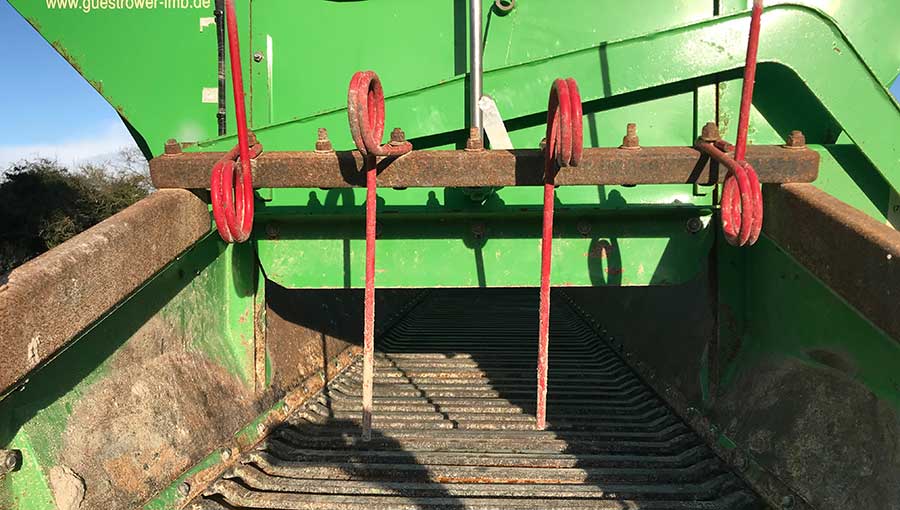 Tines for breaking up wet lime

Thankfully it’s been pretty good and I’ve only had to fork out for a couple of repairs.

One was a replacement track rod that I bent when dropping into a deep rut and the other was a hub, which had started to leak badly.

As for the spreader, it’s only really suffered from general wear and tear. I’ve replaced a few slats in the floor and had a couple of new sets of vanes.

The first time I spread slag – which is really abrasive – I chewed through them in a day.

However, for the next set Ryetec welded some Ferobide tiles on and I’m still using them now.

Thankfully maintenance on the truck is pretty minimal and technically it only needs an oil change every 100,000km – it’s only done 57,000km since new. But due to the work it’s doing I put it in for an annual service at one of my local truck dealers.

I’m hoping to keep this truck until it’s about 10 years old and at the moment I think I’d get the same again.

However, I wouldn’t rule out getting another Unimog-based spreader, particularly if I end up doing more work on hillier ground and on farms with smaller fields.

I’m pretty sure I’ll continue to run one trailed spreader for the smaller jobs on steep ground.

How it’s put together

The starting point for the Ryetrac is an MAN TGM 13.290 all-wheel-drive truck, which is usually sold as a mining support vehicle or off-road motorhome.

Power comes from a 290hp MAN engine and it has a 12-speed transmission with hi-and-lo transfer box and auto-shifting mode.

To help give a smooth ride and adapt to different loading, the rear axle is fitted with self-levelling air-suspension, while the front end has a standard leaf-spring setup. 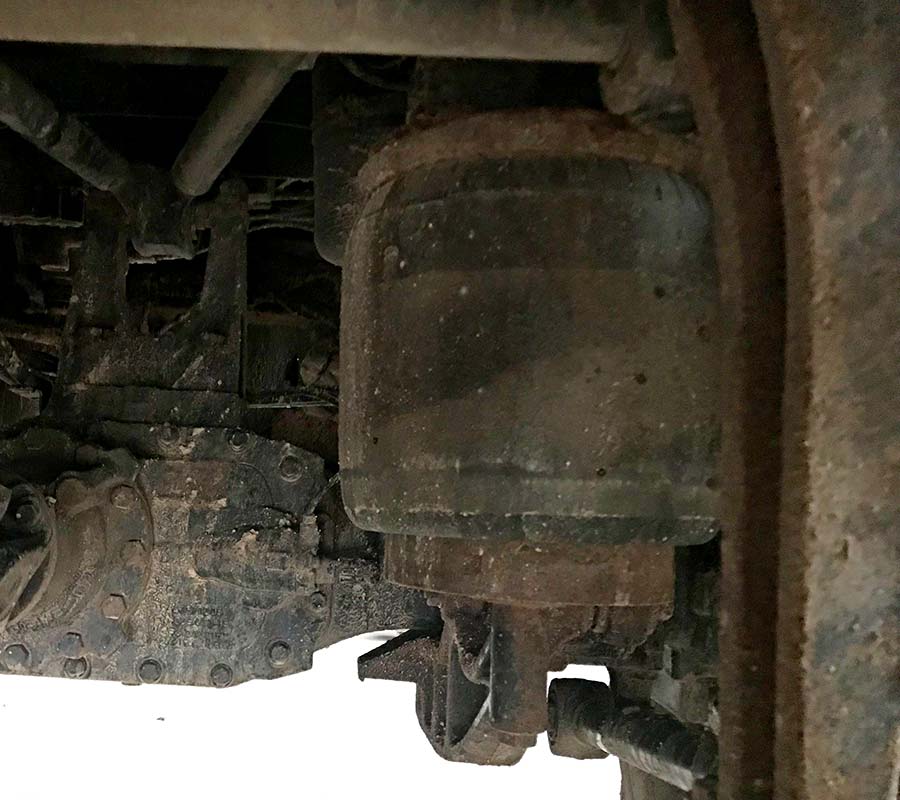 For tougher going, it has a manual locking diff on the rear axle and a limited-slip unit up front. It’s also got ABS brakes.

The spreader itself is a German-built Gustrower GDK 6.000-A with 8.5cu m hopper that will accommodate about 10t of lime. Gustrower fits this to the truck before it makes its way to Ryetec for the finishing touches.

The spreader is powered hydraulically via an on-board pump that’s connected to the truck’s constant-speed pto unit. It’s designed to spread anything from lime and granular fertilisers to Fibrophos and beet salts.

It’s capable of variable-rate spreading and will work from widths of 12m up to 36m.

Other modification work carried out at Ryetec’s Malton factory include altering the mudguards so they’ll accommodate a set of Alliance 600/ 55 R26.5 front and 750/55 R26.5 rear flotation tyres.

The rims also have new centres welded in to get the correct offset. Finishing touches include fitting an air-operated rear hitch and a larger 300-litre fuel tank.

Ryetec also does the paperwork to get the machine registered as an agricultural vehicle.  This means it can be driven by anyone over the age of 21, can be run on red diesel and doesn’t need a tachograph.

Due to its all-round suspension and truck spec it falls into the higher speed category, meaning it’s technically limited to 40mph (about 65kph).