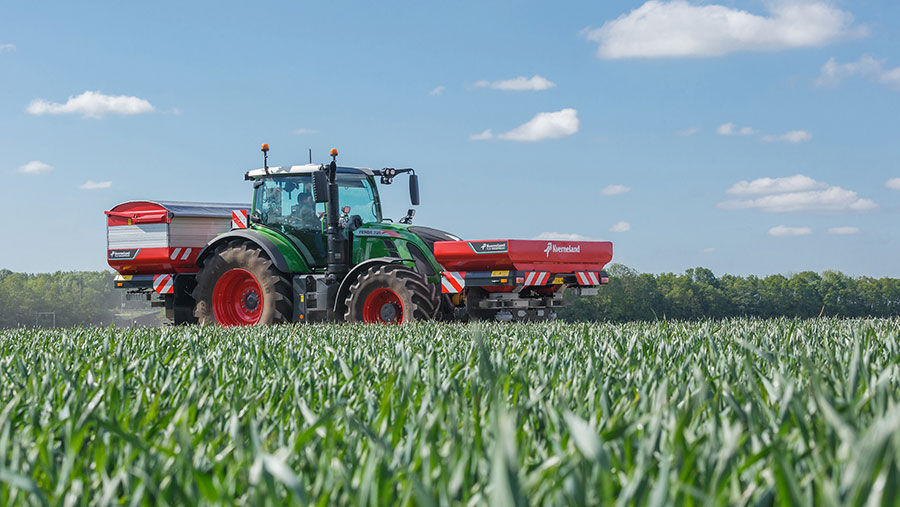 Kverneland has announced two technology updates to its range of disc fertiliser spreaders.

The first comes in the form of “intelligent disc control” (iDC), which is an integrated hydraulic driveline that uses separate, individually controlled motors to power and regulate the speed of each disc for improved accuracy – particularly when spreading around field headlands.

The company says using the tractor’s Power Beyond system, rather than a fixed pto speed and mechanical driveline, allows the tractor to run at lower engine revs to reduce fuel consumption.

It is currently only compatible with the Exacta TL Geospread model, and is for rear linkage use only. Retail prices start from £28,849.

Kverneland’s weigh cell-equipped Exacta Geospread models – the CL, TL  and TLX – can also now be used in front and rear-mounted disc spreader combinations. As a result, combined payloads can total up to 7,000 litres.

Software updates mean it is easier to set the spreader up as a front-mounted implement, and it can be managed through any universal terminal.

As well as carrying a single product, it gives the option of making two separate applications with different fertiliser products in one pass.

The lead spreader can also be equipped with a hydraulic driveline that replaces the standard shaft drive for tractors without a front pto.