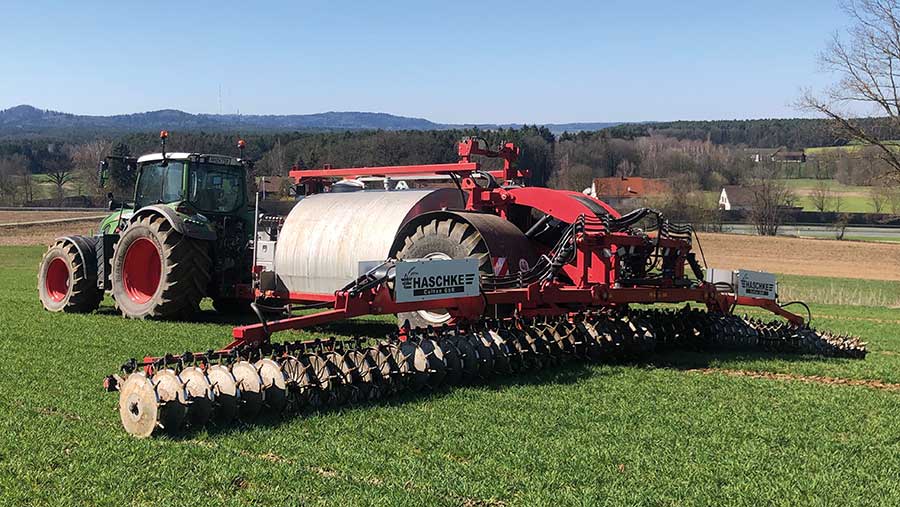 Injecting fertiliser into the soil rather than spreading or spraying it over the top may sound expensive and overcomplicated, but a growing number of farmers believe they have been rewarded with major nitrogen efficiency gains.

Cultan fertiliser applicators are now relatively established in Germany and the Netherlands and have been selling like hot cakes into eastern European countries such as Ukraine and Russia.

Several farmers in the UK have also dabbled with the technology and, as pressure grows to improve nitrogen use efficiency in agriculture, growers may want to take a look at its claimed benefits again.

Cultan is an acronym for controlled uptake long-term ammonium nutrition and essentially uses a specialist injector wheel to apply pools of liquid ammonium nitrogen fertiliser into the soil.

The theory behind creating the pool of high-ammonium N is that plants will build larger root systems and, in turn, the increased below-ground biomass will improve nitrogen use efficiency of the fertiliser applied. This should then allow the grower to trim nitrogen inputs relative to traditional means of delivery, with figures of 10-20% quoted by enthusiasts.

The use of an ammonium form of nitrogen is key to the Cultan system, as it is said to improve phosphorus uptake – a major driver of root growth.

When plants take up an ammonium ion, to keep its charge it sheds a hydrogen ion. This causes some acidification – or a drop in pH – in the root zone and releases phosphorus locked up in the soil, making it available to the crop.

Cultan systems are well established in so-called “red areas” of Europe where there is a high risk of nitrate pollution into water and there are strict limits on the amount and timing of N applications.

As the Cultan system uses positively charged ammonia nitrogen, it binds to negatively charged clay and organic matter particles in the soil and has allowed growers to apply total crop N requirement before the deadline without dramatically increasing leaching risk.

The Cultan stainless-steel wheels available from manufacturers are all similar, with the liquid solution injected through 12 8cm tungsten carbide spokes that pierce the ground every 16cm, releasing the liquid when in a vertical position.

Some older hub designs ran on nylon bushes, lubricated by the fertiliser solution itself, but the abrasive nature of liquid fert led to reliability problems, so these have been superseded by newer designs.

All the featured machines now use sealed bearings that are maintenance free and, in the case of KWD’s, the design delivers the solution via a self-cleaning distribution ring with labyrinth seal.

Soil microbes then turn the ammonium N into readily available nitrate, drip-feeding the crop with its nutritional requirement throughout the growing season without adversely affecting growth and yield.

With just one pass, there are obvious benefits in reducing machinery and labour costs and, potentially, soil damage, depending on conditions at the time of application.

The system has also proven itself advantageous in dry conditions, where uptake of surface-applied bagged or liquid N can be compromised and volatilisation risk increased – particularly in the case of urea.

As the injectors are typically working up to 8cm deep, the Cultan system will put the N into moisture and where the roots can access it, and this is one of the key drivers behind uptake in Ukraine and Russia.

With no-till also widely used in those countries to conserve soil moisture in hot and dry springs and summers, it is said to offer a way of getting the fertiliser product through surface residue to where it is needed most. 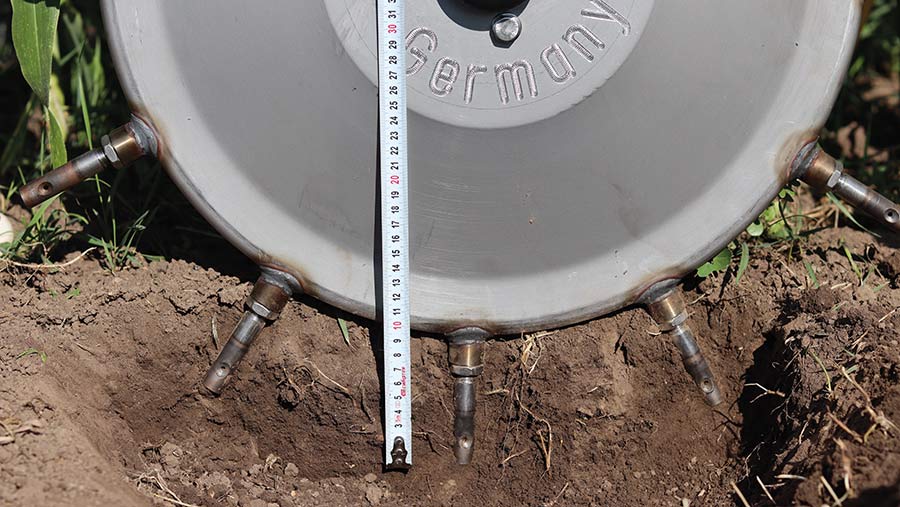 A few UK growers have been dabbling with Cultan systems, including Andrew Manfield of York-based Manterra, the sole importer for Dutch applicator maker Duport.

He says that similar to digestate application, one of the issues with Cultan adoption by arable producers is the timing of applications – typically at early tillering in wheat – so there is significant risk of making a mess.

Many growers are now on very wide tramline systems of 36m-plus, which is well beyond the reach of current Cultan machines and further complicates matters.

The increasing shift to controlled traffic farming (CTF) might make it more attractive to some arable producers, with a 12m Cultan applicator able to fit seamlessly into a 12/24m system.

Those moving to a no-till setup for soil health reasons may also want to take a look at Cultan, as a more biologically active soil could provide the ideal environment for slow release of nitrates throughout the season. 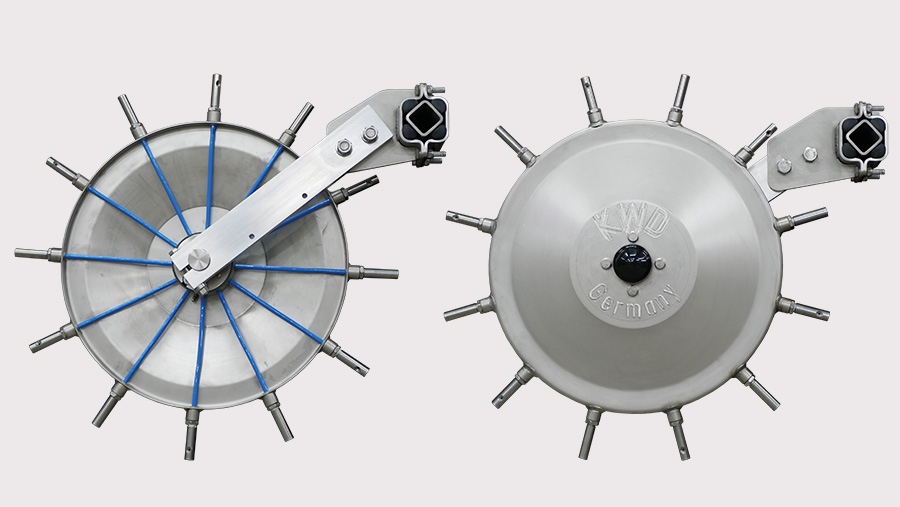 However, grassland is seen as the biggest potential market, as farmers are more used to working with 8-12m application widths with slurry. Specialist vegetable crops may also benefit from the technology.

The final hurdle is logistics, as ammonium forms of nitrogen have a lower concentration of N when compared with nitrate types.

For example, the most common liquid fertiliser used by Cultan enthusiasts on the continent is ammonium sulphate, which contains about 21% N depending on quality, compared with 32% of urea ammonium nitrate (UAN).

This means that on a large scale, growers will be dealing with greater volumes of product to hit target rates, which may slow output.

Advocates for the technology say that other nutritional or crop protection products can be added to any solution to give more value to each pass, including herbicides and insecticides.

So what machines are available? We take a look at three options in a bit more detail.

Based near Dusseldorf in west Germany, specialist manufacturer KWD has been making Cultan wheels for more than a decade, but has recently started producing its own complete applicators.

Its flagship machine is the trailed C15, which has a side-folding frame carrying 60 injection wheels at 25cm spacing to give a 15m working width. These are supplied with liquid by an 8,800-litre stainless-steel tank.

Each of the five sections across the frame supports 12 injection wheels, with sections able to move independently of each other on undulating terrain to allow for a height differential of some 2m without lifting injection tips out the ground.

Pressure on the wheels is hydraulically adjustable between 35kg and 50kg.

To allow safe cornering on headlands with the wheels in the ground, the beam is attached to the back of the machine by a vertical pivot, which enables a swing angle of up to 15deg.

The chassis is wide, which, combined with the low profile of the tank, means a low centre of gravity and a smoother ride on the road when fully laden.

KWD’s Micha Strücher says the company is focusing on developing its eastern European market and dealer support network with the C15, as its hefty €200,000 (£176,800) price tag and size are too much for many small to medium-sized business further west.

The company is in the process of building a factory in east Ukraine to lower production costs, although the injection wheels will continue to be produced at its specialist CNC production site in Germany.

However, with a significant chunk of stainless steel, hardened components and a continued focus on high-end parts, potential buyers shouldn’t expect big discounts once the operation is up and running.

Mr Strücher says for farmers looking to save money, building their own applicator is an option and the firm does sell the injection units – which comprise suspension, hedgehog wheel and ground pins – separately.

The biggest and most established seller of complete Cultan applicators in Europe is Dutch firm Duport and its Liquiliser injection system is available in the UK through Yorkshire family farming and machinery business Manterra. 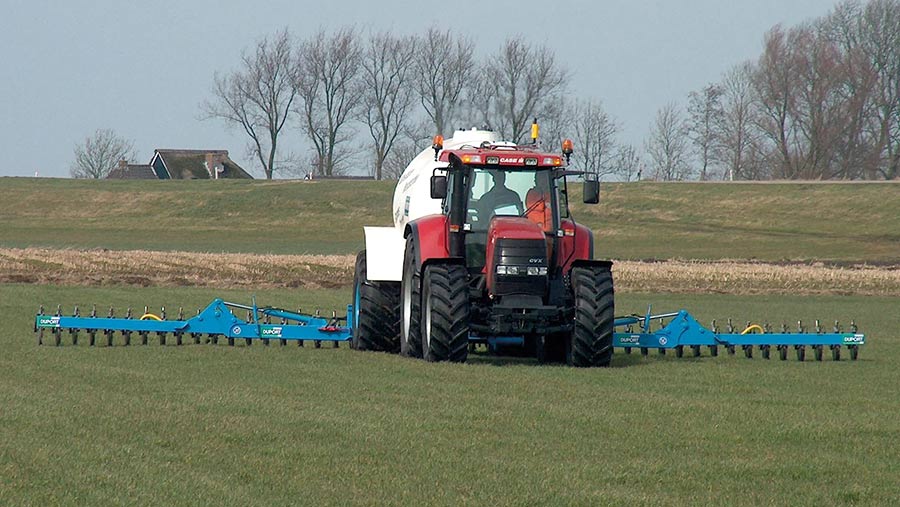 From its factory, machines can be fully customised to needs, but they are usually made in 8m, 12m, 13.5m and 15m working widths, with a choice of stainless-steel or plastic tanks.

Essentially, everything up to the anti-drip valve is the same technology as a sprayer, but Duport fabricates a heavy-duty boom to carry its injector wheels.

The stainless-steel wheels sit on a sprung steel suspension at 25cm spacings and typically deliver liquid application rates of 250-1,500 litres/ha.

Manterra’s Andrew Manfield says because there are so many options for customising the tanker units, it is difficult to put a price on a particular model out of the firm’s Dedemsvaart factory in the Netherlands. However, for a boom and injector wheels customers can expect to pay £5,000-£6,000/m.

Its export manager, Heiko Tolzin, says its main markets are Germany, Ukraine, Russia and some Balkan states, but the firm will export its machinery to the UK market through Yorkshire machinery supplier Ryetec. 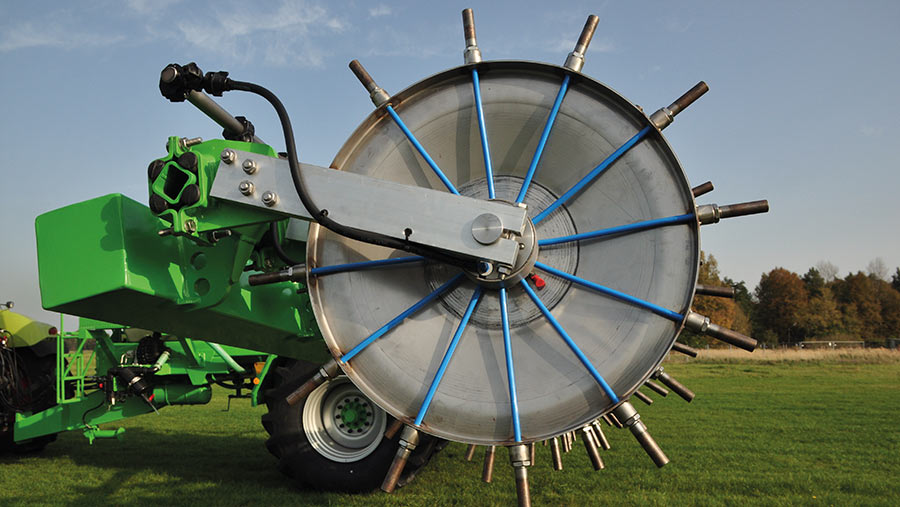 Its 15m GFI 15-4 has an 8,000-litre plastic tank with stainless-steel fittings and sits on top of a single-axle chassis with twin-circuit air brakes and 800/65 R32 Alliance tyres.

The injector frame arms are made from sturdy box section and its five hydraulically folding modules are joined by slide-mounted wear bushes. A guided locking system holds it in place for transport on the road.

Gustrower now uses Duport’s 12-spoke injection wheels, with four per metre along the boom. While the GFI 15-4 has a working width of 15m, this can be reduced to 12m to fit into a 12/24m CTF system. 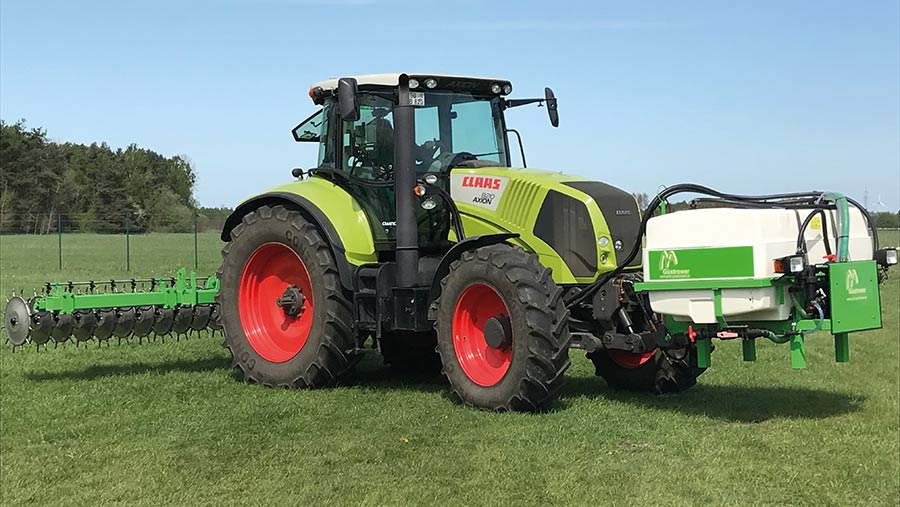 A 200-litre clean water tank, LED lighting and a fixed working platform to access the top of the tank are all standard.

The system is run through an Isobus terminal, with section control and variable-rate applications possible.

List price for a GFI 15-4 is a hefty €215,935 (£190,900) and Ryetec’s Mark Harrison says because of the cost, there is no plan for them to bring over a demonstrator without getting some more advanced interest from UK farmers.

He believes that it is a proven system on the continent and has great potential here, particularly in no-till CTF systems and grassland.