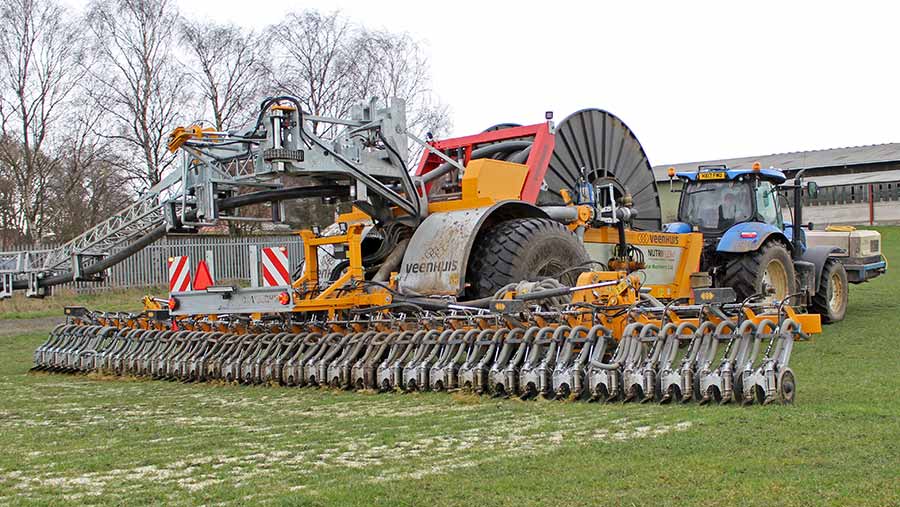 Digestate and slurry spreading might once have been deemed an inconvenient clear-out exercise, but its potential for cheap crop nutrition and tighter regulations governing its disposal mean it is now a multi-million-pound precision operation.

The changes have encouraged specialist contractors to invest heavily in the job.

They are opting for machines that can monitor the nutrient composition of the material and inject it into the soil (and therefore crops’ rooting zones), rather than throwing it across the surface.

One such contractor is North Yorkshire-based Mark Harper, owner of Alligator Machinery.

He recently ploughed a substantial sum into a new 12m-wide Veenhuis Rotomax with Nutriflow sensor onboard – the first one to be sold in the UK through Suffolk importer Technical Waste Solutions. 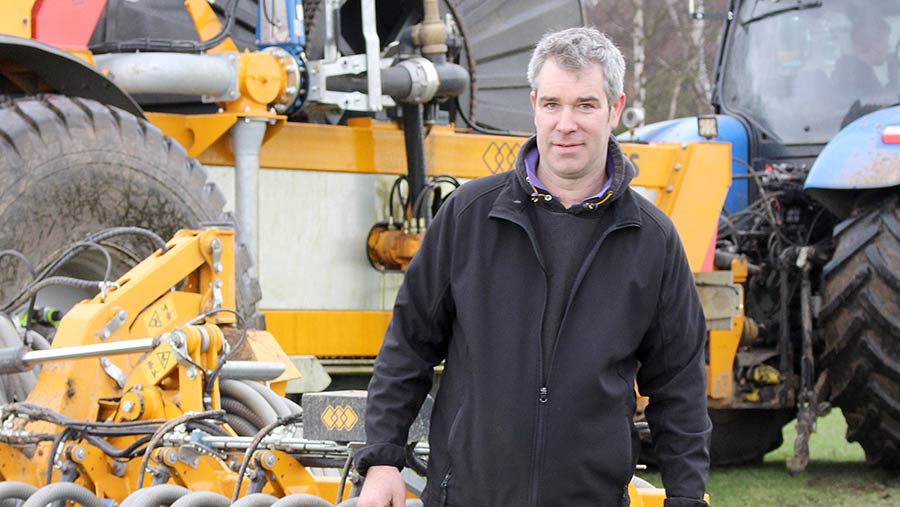 It dovetails with the forgaging side of the business, which will this year use a new Claas Jaguar 980 with telematics to sense nutrient and DM values and charge customers by the tonnage harvested.

The Rotomax can then enter the field straight after, applying slurry to the cut surface when the plant needs it most and therefore reducing the reliance on bagged fertiliser.

Watch the video of the kit in action and read the full report below.

Mr Harper placed an order for Veenhuis’ Rotomax after seeing it in action in the Netherlands.

It arrived in the UK at the start of this year and, after spending a couple days under the lights at Lamma, he got his hands on it and took up the offer of a week’s intensive training from the Dutch firm’s specialists.

It is an ungainly-looking machine but the way it works is relatively simple.

A powered reel carrying 500m of 5in-diameter lay-flat pipe is carried centrally on the frame and is automatically wound in and out as the machine runs in a straight line down the field.

Manual shifting of pipes around and getting covered in mud has been drastically reduced.

An extending axle spreads the 9t dry weight and a further steering axle means the Rotomax can be offset to the tractor’s wheels and still controlled by the GPS.

The only time the operator needs to put it in free-wheel mode is when turning on a headland or switching the arm from side to side.

It also works on its own throttle system, kicking the pump into action when the discs are lowered.

Slurry passes through a Nutriflow sensor (more on this later) that is located between the wheels.

Two Vogelsang macerators – one for each side – sit on the boom to blitz any lumpy material and, once through these, the slurry or digestate is fed down clear tubes to the rubber boots.

These tubes are opened and closed by air, which makes for a clean entry into the soil and minimises overrun.

In front of each boot along the 12m bar is a 350mm disc running at 30deg to create a slot roughly 50mm deep for the slurry to fall into.

The discs are grouped in pairs and work independently from their neighbours, helping to flex with the ground and provide penetration in any conditions.

This gives just enough of an opening for the material to sit in and prevent run-off, with disc pressures running around 80bar, but this can be wound down for softer arable land.

When Mr Harper first saw the Rotomax, he was surprised that it used lay-flat pipe.

The expanding and contracting experienced with 15bar pressure can have very messy consequences, but so far it has performed well and he envisages using 8in pipe in the future to keep up with output.

Crop damage has also been slashed, partly as a result of the reduced horsepower demand.

Typically, umbilical spreading takes a minimum tractor of 250hp, as the resistance from 500m of slurry-filled, 5in-diameter pipe being pulled through standing wheat is a big power-sapper.

However, the Rotomax can get away with a 140hp tractor, which saves on running costs and machinery investment.

This is also down to the 1,000-speed pto powering an inbuilt hydraulic supply for the reel and other onboard services. The only item that is controlled by the tractor’s hydraulics is the boom.

The pipe is laid across the field by the pivoting arm during one pass and picked up on the return leg, which means there is no dragging, uprooting or smearing of plants.

It is also placed outside of the working width rather than in the tracks of the machine, so won’t affect the material working its way into the slot.

A clever addition to the system is a blow-back option on the pipework that reduces wastage and instances of over application. 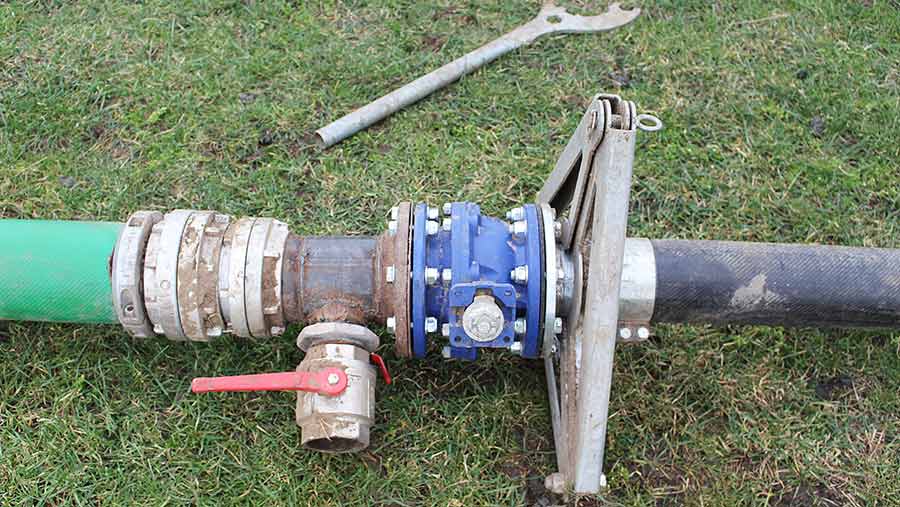 It means that the operator can attach a front-linkage-mounted compressor to the 6in lagoon outlet to blow excess slurry back up the line, rather than having to guess how much material is needed to finish the field.

However, once the Rotomax is through its teething period, he expects it to require just one operator, with an extra bod needed for transporting the static Cummins engine for the pump and the extra hose reels.

As everything is charged by the tonne, the farmer doesn’t pay any extra, but he benefits with the Rotomax applying fertiliser after each cut, which means the quality of the grass is hugely improved.

And as it is injected, it doesn’t contaminate the leaf, so animals are able to graze the field straight away, too.

Mounted between the wheels of the Rotomax, the NIRS (near infrared spectoscopy) sensor can identify amounts of nitrogen phosphate, potassium, ammonia and dry matter in the material by using the infrared section of the electromagnetic scale.

NIRS analysis fires the target matter with a near-infrared light and measures how much each wavelength of light is reflected by the passing sample.

This is known as the spectrum and contains information on the sample’s make-up and, because the bonds between different molecules such as hydrogen, carbon, oxygen, nitrogen and sulphur all absorb the near-infrared light in different ways, the analysis can instantly tell how much of each is in the sample. 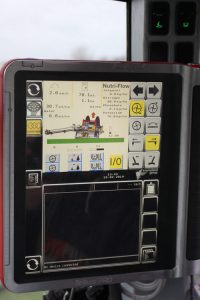 This information is fed as live, raw data into the in-cab screen.

Farmers and growers will then be able to record the composition of their digestate or slurry, which will help manage field inputs and balance applications of synthetic fertilisers.

Operators also have the ability to run application rates based on specific components of the slurry – for instance, targeting underperforming areas with a particular rate of nitrogen on a kg/ha basis.

At the time of our visit, the firm had spread about 25,000cu m of digestate at an average rate of about 250cu m/hour.

This may seem slower than a dribble bar, but Mr Harper says he is confident that customers crops are benefitting from the service.

Part of the reason for the slow workrate is the length of the rig.

At 12m, small fields are a challenge to negotiate, so he hopes to have it running for 24 hours a day once his team are comfortable operating it.

Alligator Machinery plans to run a number of roadshows across the country later in the year to highlight the benefits of the system.

Cutting down on paperwork

A key factor in Mr Harper’s buying decision was the potential to reduce the administrative burden and form filling associated with slurry application, as well as being able to supply his customers with detailed records of exactly what they are paying for.

The Veenhuis system is able to map fields for individual customers, detailing exactly what is spread and where. This information is uploaded directly to the cloud.

Mr Harper says the onboard mapping is a more professional way of charging his customers for work than relying on a flowmeter as it’s all electronic, there is little chance of errors creeping in.

In time, it will also be possible to download soil analysis maps stored on the cloud to the Rotomax, giving operators the chance to run variable-rate spreading systems to boost areas that are low in certain nutrients.

This, he says, will reduce reliance on bought-in fertiliser, which is subject to huge price fluctuations.