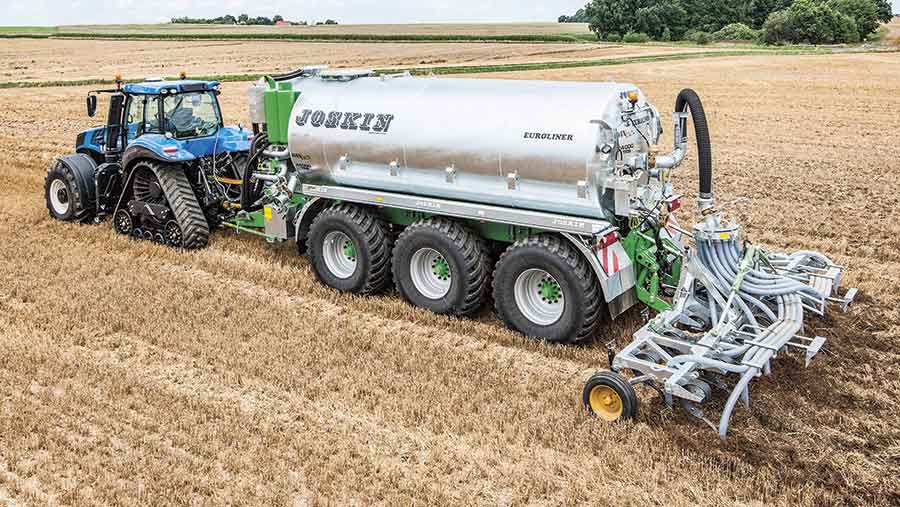 Scientists have been using near-infrared spectroscopy for decades, analysing everything from blood and tissue samples to livestock forage and grain.

But now this technology is starting to migrate from the lab to the field, with units suitable for fitting to forage harvesters, slurry tankers and combine harvesters already making their way on to the market.

These systems work by shining a beam of broad-spectrum near-infrared light at the silage, slurry or grain the operator wishes to analyse. Depending on the make-up of the sample, different amounts of this light are absorbed, reflected or scattered when they make contact with it.

A sensor within the system records the amounts of light being reflected back off the sample and compares the figures it receives against a database of samples tested in a lab.

Many samples can be taken per second, and providing the reference data is up to date, the results should be very accurate (see Limitations of NIRS).

Below we take a look at a few of the systems that are currently available.

John Deere has been the first of the major agricultural machinery manufacturers to really capitalise on the benefits of near-infrared technology.

Its Harvestlab system has been around for several years now and when fitted to a forager is capable of measuring silage dry matter and automatically making adjustments to chop length to suit. 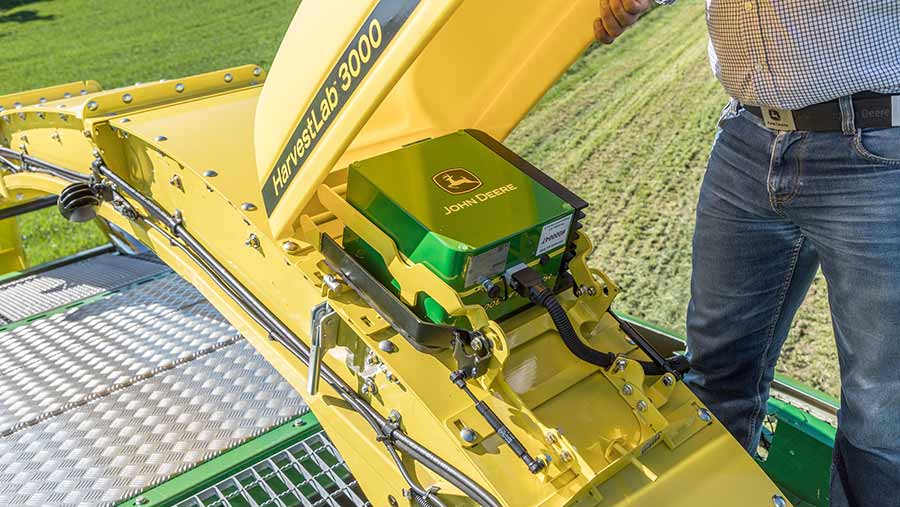 Operators are able to view the readings while harvesting and then make the relevant adjustments to maximize feed quality.

The Harvestlab unit itself is mounted on the forager spout and has a lens that takes up to 4,000 readings per second from the forage as it whizzes past.

It’s capable of taking measurements from maize crops as well as grass and can be removed from the harvester and used as a stationary tester for assessing forage nutrient quality during feeding.

It can also be transferred to muck and slurry spreading kit for on-the-go manure testing.

Claas now offers a brace of NIR systems for its range of Jaguar forage harvesters – one that offers a simple dry matter reading and another capable of doing nutrient analysis. 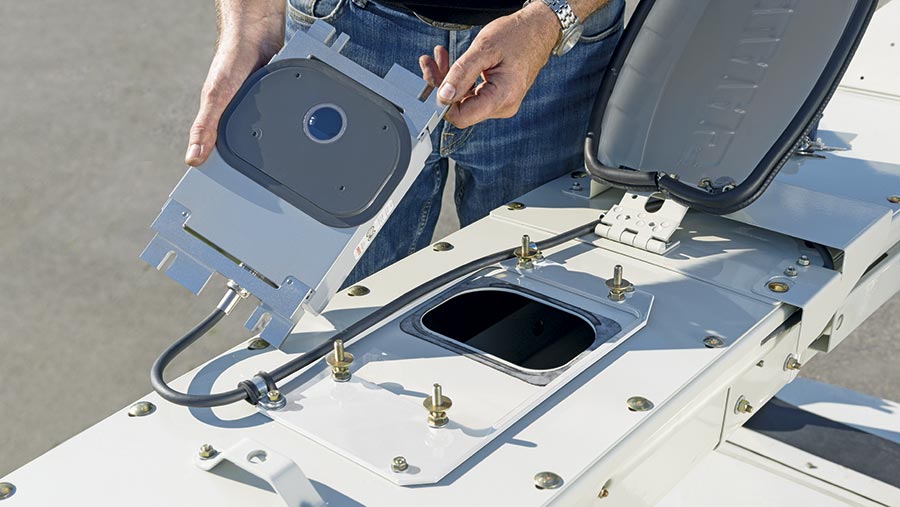 This records amylum, crude fibre, crude protein, crude ash and crude fat. Like John Deere’s version, the unit mounts through a hole on the forager spout and takes readings directly from the crop as it passes by.

This is then sent to the Cebis in-cab screen so the driver can monitor any changes in the quality of the grass. It is also possible for the information to be transferred wirelessly back to the farm office.

Dinamica Generale – NIR On Board

This is the unit New Holland uses on its machines, but it’s also available separately through UK importer Greenforage.

Like the Deere and Claas systems, the NIR On Board kit fits to the forager spout and uses a lens to read the forage as it passes by.

The results are displayed on a screen in the cab and can also be wirelessly transmitted to the firm’s own cloud-based software system called Field Trace.

It can be installed on any make of forager and is capable of reading both dry matter and nutrient content. The kit can also be used for taking readings on slurry tankers and combine harvesters and mixer wagons.

Dutch firm Veenhuis has had a busy few years developing its own NIRS system for accurately measuring the nutrient content of slurry and digestate being applied by its machines.

Now that the testing phase is out of the way, the Nutriflow system is on sale with several units working in the Netherlands and a few in the UK.

The unit itself bolts into the tanker’s pipework and constantly beams near infrared light at the liquid as it passes by. 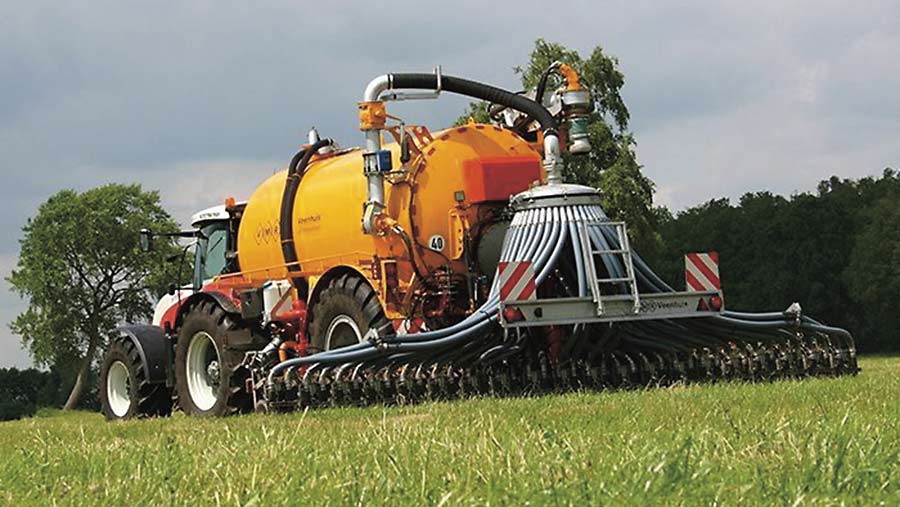 It’s capable of picking up nitrogen, phosphate, potassium, ammonium and dry matter percentage, and has been calibrated using “all manor” of liquid manures to make sure the readings are as accurate as possible.

By linking this system to the spreading equipment control and GPS via Isobus, the rate can then be varied to make sure the field gets an even dose.

Accurate application maps can also be produced to show how much of each nutrient has been applied where.

It’s possible to combine the Nutriflow unit with a front fertiliser tank, which can be mixed with the slurry or digestate if the nutrient content of a certain batch is too low.

The system can be combined with automatic section control to prevent any overlaps, too.

The system is available through UK importer Technical Waste Solutions.

A number of slurry equipment makers have adopted Deere’s Harvestlab system for nutrient analysis of manures, but Belgian maker Joskin was one of the first.

It has been working closely with John Deere over the years to develop an integrated system, which was launched commercially in 2017. 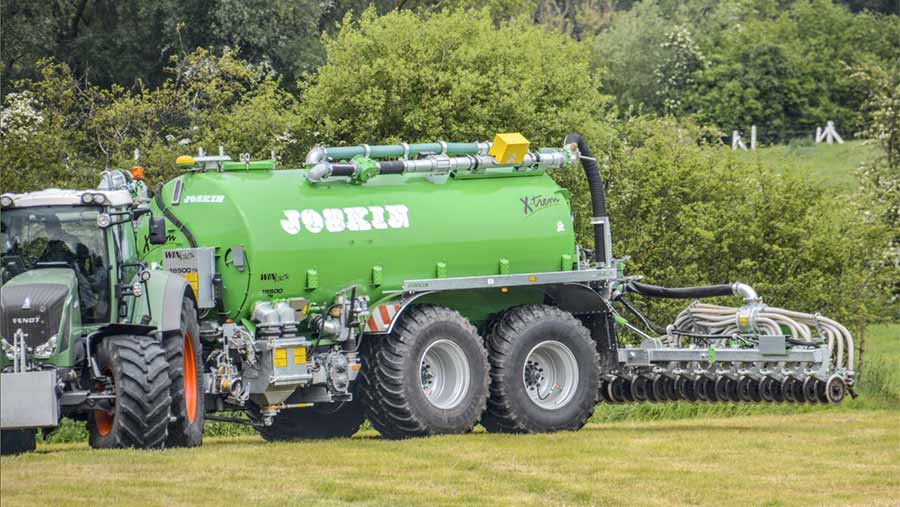 This uses the Deere sensor to take the nutrient readings, while Joskin’s own flow meter uses the information to adjust application rates accordingly.

It’s also possible to hook the system up to John Deere’s tractor implement system (TIA). This allows the tanker to take control of forward speed, offering another method of automatically controlling application rates.

Operators can pick minimum and maximum values of N, P and K, and the flow meter automatically adjust the quantity of nutrients going to the distributor.

No modifications need to be made to the Harvestlab unit, but additional parts are required to hook it up to the tanker.

Joskin doesn’t sell the Harvestlab sensing kit itself, so this needs to be sourced through Deere. However, for those who already have a unit fitted to a forager, it’s a 20-minute job to move it from one machine to the other.

On the combine front, NIRS gives farmers the opportunity to accurately measure protein, oil and moisture in cereal grains and oil seeds as they are harvested.

The Cropscan 3000H from Australian firm Next Instruments – imported by Precision Decisions – is mounted on the clean grain elevator and takes samples as the crop makes its way up to the tank. 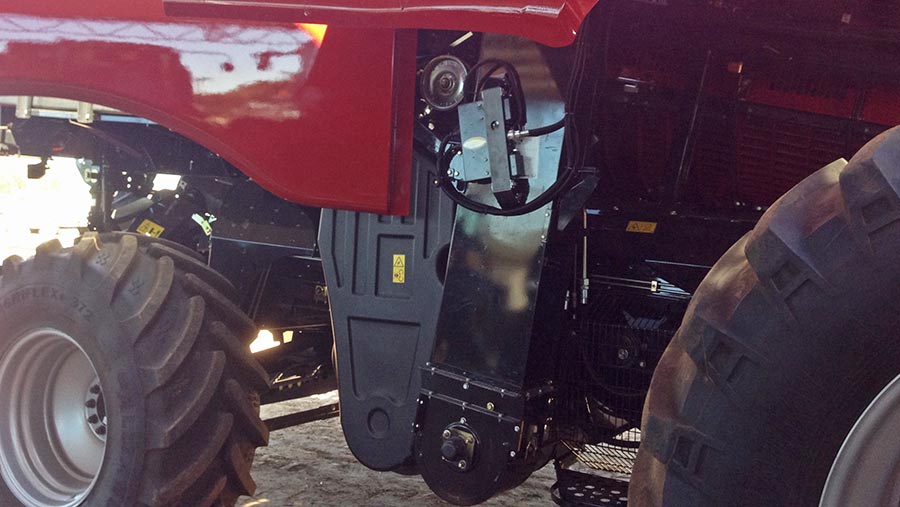 Samples drop into the sampling head for a few seconds while light is passed through them.

A fibre optic cable then collects the transmitted light and sends it to the NIR spectrometer unit in the cab. The readings are then displayed on a touch-screen computer.

Data is collected and displayed every seven to 12 seconds and the operator can view tank averages, field averages and real-time protein maps. It can also wirelessly transfer the information to a computer.

According to Precision Decisions there are currently five machines operating in the UK, fitted to three different brands of combine. Initially, the units were used for research, but some commercial farms are now running them. 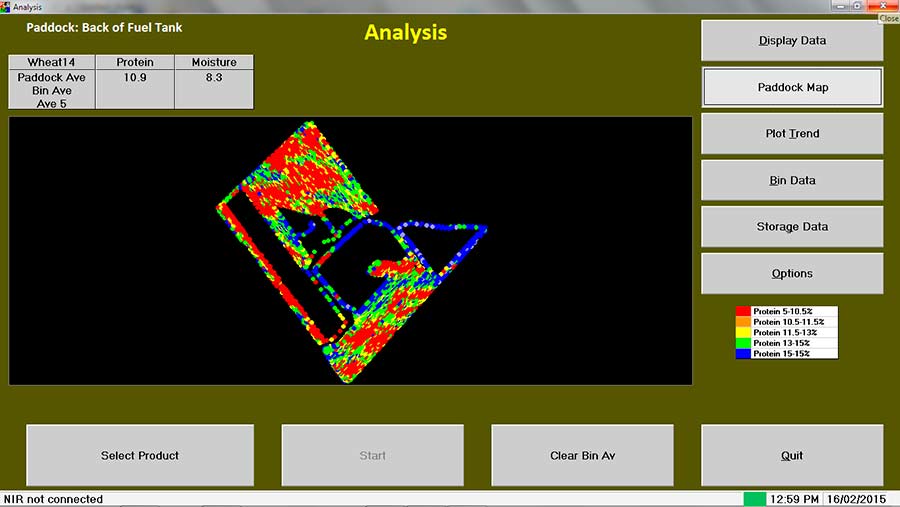 So far the data has mainly been used to identify nitrogen removal and how this affects yield. Most of this has been in milling wheat, but some work has been done in barley too.

To make sure they’re giving accurate results accurate, the units receive new calibrations every year, which are specific to UK varieties.

Precision Decisions has done this calibration work in conjunction with ADAS, which involved putting more than 50 samples of nine different varieties through the system. 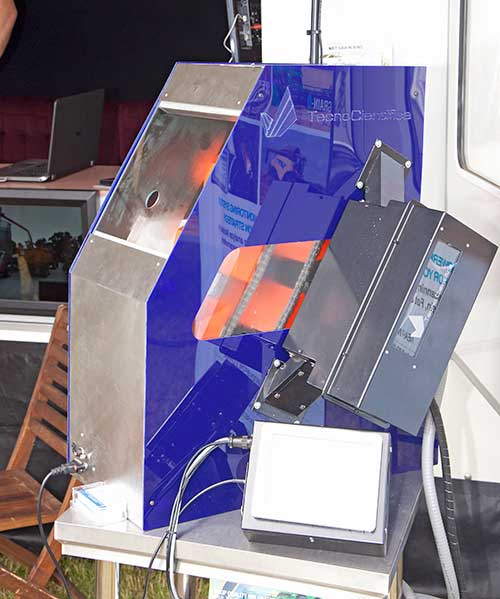 A similar system to the Cropscan 3000H is available from Techno Cientifica, based in Buenos Aires, Argentina.

This also mounts to the clean grain elevator and continuously hives off small samples that pass by the NIR sensor.

The unit is capable of monitoring moisture, protein, starch and sugar and the readings are apparently accurate enough to tally with the instruments used by most mills.

All readings are sent back to a tablet computer in the cab and there is a built-in GPS unit to show you which parts of the field have performed best. It will also keep a record of the average condition of each tank load.

The system is available through Master Farm Services.

For those who want to test field samples prior to harvesting and monitor the quality of forage during feeding, there are a number of portable NIR systems.

The Agri-NIR from Dinamica Generale fits into a small wheel-along unit and is calibrated to take readings from most types of forage crop. 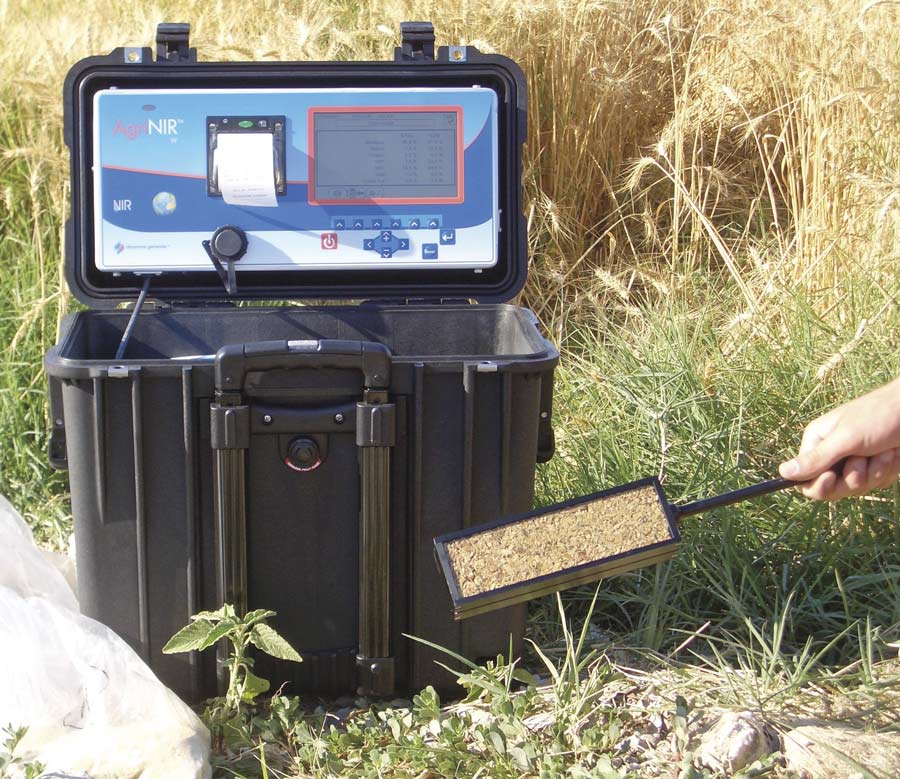 All the operator has to do is load a sample into the unit, press a couple of buttons and wait 60s for the result to come through. The result can then be printed on a ticket or transferred to a computer via USB.

It does need to be plugged into a 240v power supply unless a separate DC power pack is purchased.

The company also offers a smaller hand-held system called X-NIR. This is very simple, requiring the operator to point the machine at the sample to be tested.

Results are given in less than a minute and are stored on the unit. The readings can then be transferred using a USB stick.

Both of these units are available through Greenforage, based in Ingleton, Yorkshire.

A study conducted by independent researcher Dr Dave Davies of Silage Solutions called the accuracy of some near infrared spectroscopy testing into doubt.

After testing 177 grass silage samples using both wet chemistry and NIRS analysis, he found the latter inaccurate when it came to sugar predictions.

This could lead to some farmers over-feeding expensive protein sources as a result of labs underestimating true forage potential.

Dr Davies said the failing did not mean the NIRS technique was inferior, but was reflective of the databases that labs used to predict the results.

These databases are based on historic chemical analysis and are used to predict the quality of fresh silage samples submitted using near infrared-spectroscopy, he says

Therefore, unless these databases are kept up to date, it is difficult to predict silage quality accurately.

Although his report is primarily aimed at those getting NIR testing carried out by a lab, he advised farmers to question the quality of the databases used before committing to using them.