Spraying contractor Mungo Howat reckons he has found the perfect system for spraying across the sometimes hilly ground around his Perthshire base.

Mr Howat likes the manoeuvrability, traction and relatively light weight of the four tractors he runs, and the stability and rearwards visibility afforded by the saddle tanks installed on three of them.

“You have to be a bit cautious with the two-wheel drive machines on banks but the four-wheel drives will go anywhere – places where a self-propelled driver would fear to tread,” he says. 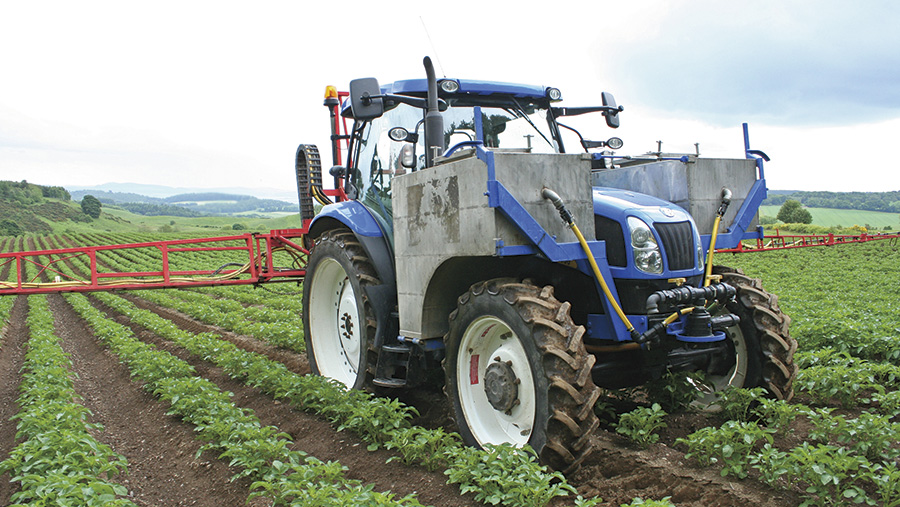 “The saddle tanks keep the weight low between the axles so they’re very stable.”

More than 40 or so years, his late father-in-law James Scougall built up a loyal customer base for his agricultural spraying business operating out of Abernyte, 20-miles west of Dundee.

Mr Howat is keen to retain and build upon that track record with a combination of agronomy advice, independent product supply and 8,000ha of contract spraying throughout Perthshire and Angus.

“We serve mostly smaller family farms, plus a couple of larger units, in an area where malting barley and potatoes are important crops,” he explains.

“For some customers we just spray, for others we only provide agronomy advice; but on some farms we handle the whole crop management and spraying requirements from start to finish.”

Increasingly complex legislation is encouraging more farms to hand over their spraying operations to Mr Howat, his operators and their four tractors.

There is a pair of four-cylinder, two-wheel drive New Holland T6000 tractors and another brace of six-cylinder, four-wheel drive models, which have plenty of power and low-speed torque, as well as a longer wheelbase, which contributes to stability.

The uncommon saddle tank installations are a carry-over from the time the business provided acid application to desiccate potato crops.

There are four sets in all, each providing 1,500-litres capacity and operating with a 24m Scorgie boom, which apart from being built for hard work is configured to operate at different widths or with just one side extended.

“That’s also a very handy feature when you have to work past a tree or telegraph pole,” Mr Howat points out. 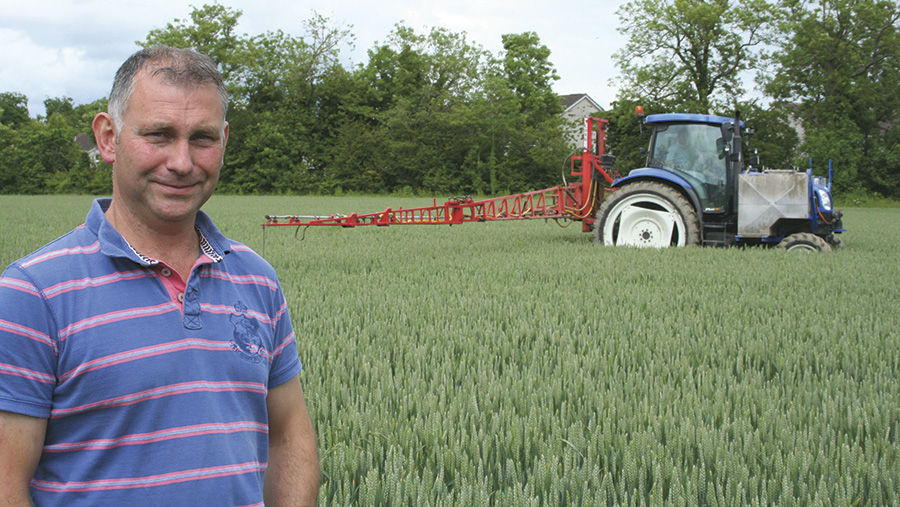 Exhaust emissions legislation is the surprising reason for one of the tank sets now being held in reserve and for a conventional sprayer being fitted to the latest tractor acquisition.

“The two T6020s and the T6030 are lightly modified by moving the exhaust pipe closer to the cab and also on the T6030 by replacing the fuel tank with a smaller one from the four-cylinder tractors,” explains Mr Howat.

“But the AdBlue emissions system on the T6.175 means there’s just not enough room for a saddle tank.”

On the upside, the new Scorgie outfit has an extra 1,250-litre capacity for increased output thanks to the front-mounted tank.

A Bill Bennett Engineering pick-up hitch has replaced the regular New Holland hitch because it operates independently of the tractor’s lift arms and so the tractor can still tow a 6,000-litre bowser with all the supplies needed for a day’s spraying.

“They also drive well on the road and we have all the traction we need in the field – even from the two-wheel drive T6020s; put the diff lock in and they’ll climb anywhere.”

The attraction of these two UK rarities – most buyers want four-wheel drive – is their ability to virtually turn on a sixpence, which means they are invaluable for spraying in narrow-bedded seed potato crops.

Tall row-crop tyres provide decent underbelly clearance and plumbing the saddle tanks so they both fill and empty at the same rate means the weight remains evenly distributed and stability is maintained at all times.

“I’ve looked at self-propelled sprayers but I don’t see myself changing from what we run now,” says Mr Howat.

“For travelling from site to site, working in potato fields and spraying on our banky ground, they tick a lot of boxes.”