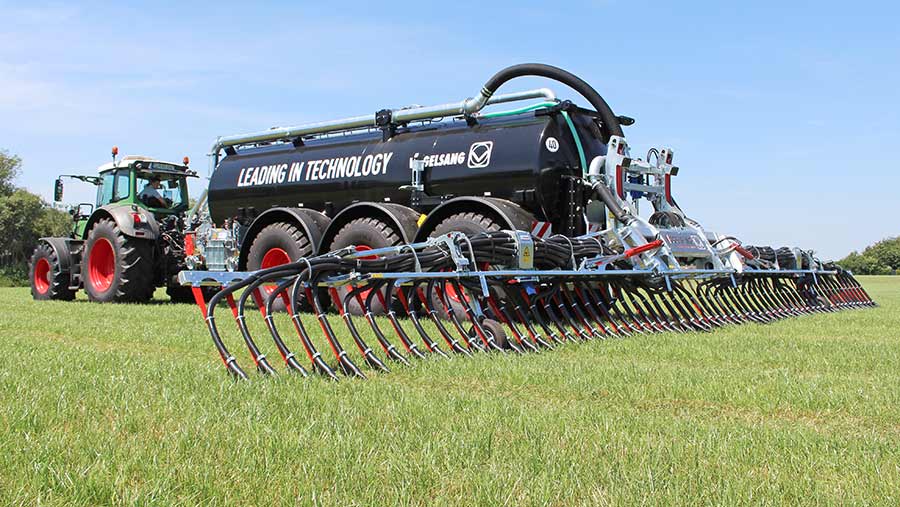 Family-owned Vogelsang has built its first dedicated Blackbird trailing shoe toolbar, with a redesigned distributor to help improve the accuracy of slurry spreading.

The new product fills a hole in the company’s product range and offers livestock farmers, in particular, a cleaner and quicker method of getting valuable fertiliser onto grassland, drastically reducing leaf contamination.

Previous trailing shoe offerings from the firm have been limited to the Baserunner – a retrofit beak onto a dribble bar hose – but with the new Blackbird, the company has built a machine specifically designed for trailing shoe applications.

The Blackbird is available in 12m or 15m widths and can bolt straight onto an existing tanker that has a three- or four-point rear linkage.

The Vogelsang team can build the folding rig to the tanker’s dimensions to achieve the snuggest fit for road work.

Retrofitting the toolbar is simple and once hitched on the linkage, it only requires hydraulic connections.

There are no extra hydraulic pipes needed for the locking mechanism on the booms, as these are held in place by a sprung setup.

Each hose is held on a ridge frame at 25cm apart, with machine output easily capable of 35cu m/ha flow rates, with higher rates possible.

At the base of these hoses is a half-moon-shaped edge with 12kg of downward pressure, so it can break the surface of the soil to help the slurry work its way down.

The new beak-like shoe behind the disc is pinched at the bottom to avoid splashing as the slurry fires its way down the hose.

The material is left in a heaped ridge, as the shoe has a long, thin opening that tapers towards the end to avoid any material hopping out of the trail.

This helps livestock farmers graze the field sooner after application, when compared with a standard dribble bar. 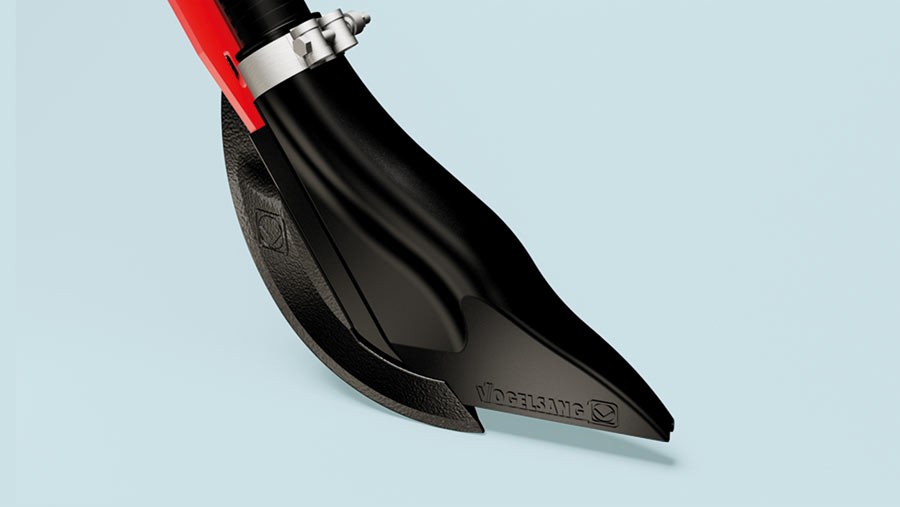 A gripe of many Vogelsang customers has been the awkward service access of its previous ECL distributor.

Blade changes on these units would take well over an hour.

The Blackbird is the first model to be fitted with a redesigned ExaCut ECQ distributor that looks to have solved these issues and brings service periods down to about 15 minutes, we’re told.

Four bolts allow a large service panel to be removed and, once the sprung-loaded tension and 21-spline shaft have been released, the distributor’s innards hinge out to offer almost 360deg access to the blades, without needing to remove the whole unit.

Inside, the three-vane design of the rotor offers a lower rotating speed and only requires oil flow of 30 litres/min, while still offering the same cutting performance.

By reducing exposed surfaces and increasing inlet size, there has been a 50% reduction of internal pressures, which helps to extend the service life of these parts.

Getting material to flow evenly across the width has been a challenge and Vogelsang has mounted one of its new ECQ distributors on each side of the boom.

By doing this, the two units are positioned centrally, which means the lengths of pipe running down the shoes are the same across the whole machine.

This means when the tanker runs out, there is no triangle-shaped finish as the material works its way from the longest tubes to the shortest.

Conversely, when starting from where you finished, all tubes are filled with slurry and start spreading straight away.

Both booms are independent and a wheel on either side allows ground to be followed, while there is also an option for a six-section shut-off control.

The Blackbird is available now in both sizes, with the 12m base price at €34,000 (£30,400), the ECQ distributor is standard, but other machines in the Vogelsang garage will have to wait until Agritechnica for the new distributor option.