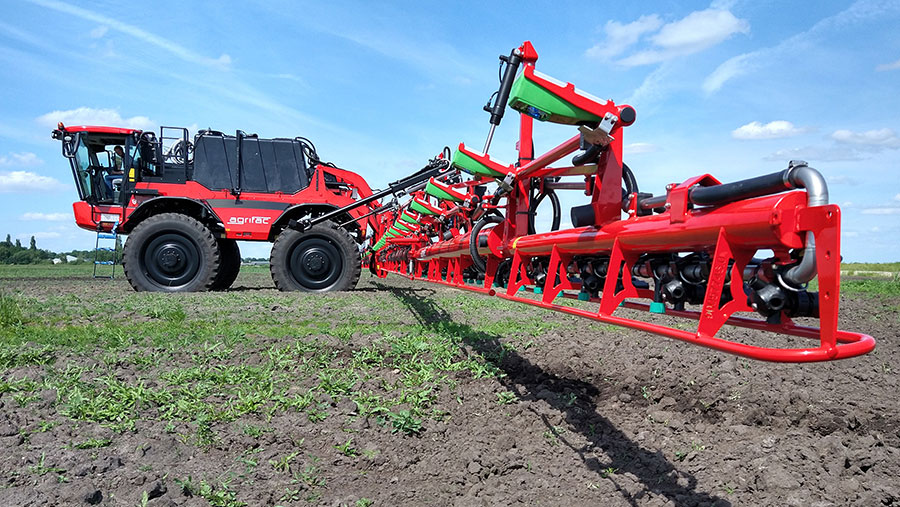 Agrifac is to offer Weed-It spot spraying technology on its Condor and Condor Endurance self-propelled sprayers.

The Quadro system, which is built by Dutch firm Rometron, is designed to sniff out and snuff out weeds on stubble fields – the so-called “green-on-brown” scenario.

This means it only releases a jet of chemical upon detection of a plant, resulting in a potentially drastic reduction in herbicide costs compared with blanket applications.

The system works by emitting near-infrared light from a series of blue LEDs mounted on the boom.

This is reflected by chlorophyll in living plants, with the fluorescence measured by sensors mounted at 1m intervals – each one controlling four nozzles spaced at 25cm.

These are able to distinguish between weeds and soil at speeds of up to 25kph and in light or dark conditions.

Each sensor is fitted with a three-axis accelerometer, which means it can also account for changes in boom tip speed when cornering to maintain accuracy.

The system is very different to that of Bilberry, which Agrifac also offers as an option.

The Intelligent Spot Spraying kit uses RBG colour cameras to analyse the plant and, as a result, can differentiate between crops and weeds for applying herbicide in a “green-on-green” situation.

Rometron’s Weed-It can be retrofitted to any sprayer with a single integrated sensor and solenoid cable harness and is already widely used in Australia, where it has been available in various guises for two decades.

However, the recent switch to blue lights has apparently made the system more accurate and less less sensitive to other interfering factors, which means it can detect smaller weeds than before.