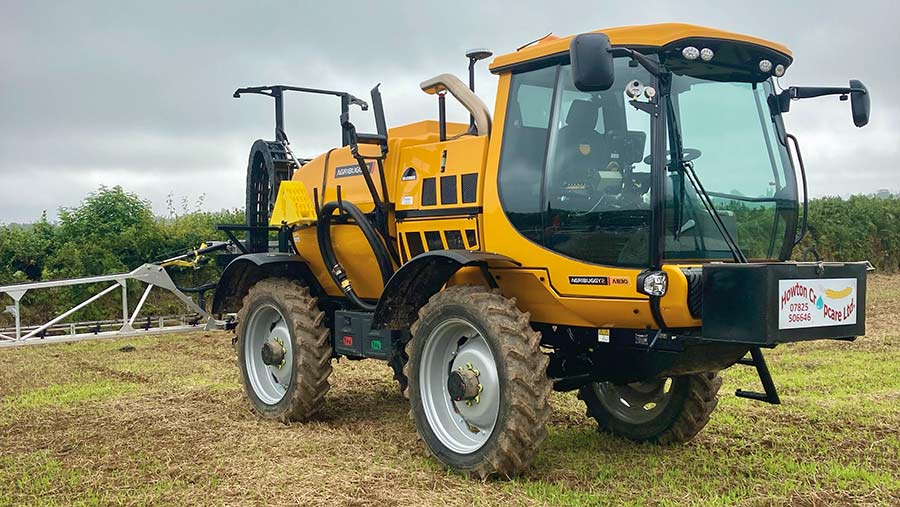 Howton Cropcare is now on its second McConnel Agribuggy, which it runs as part of a three-strong fleet of self-propelled sprayers but it has required several modifications to get the best from it.

Demand for small, lightweight sprayers may have coiled back from the halcyon days of the 1980s, but plenty of farmers and contractors still hanker after something nimbler and more manoeuvrable than an acre-eating, 6,000-litre self-propelled.

Options on the market are gradually evaporating as buyers choose to go bigger or switch to tractor-mounted or trailed alternatives, leaving just a handful of candidates to pick from.

For Howton Cropcare, a contract spraying outfit based near Saltash in Cornwall, only one fitted the bill – McConnel’s 3,000 litre, 24m Agribuggy2.

It runs this alongside a brand-new Chafer Interceptor and Multidrive M420, both armed with a 4,000-litre tank and 24m boom. 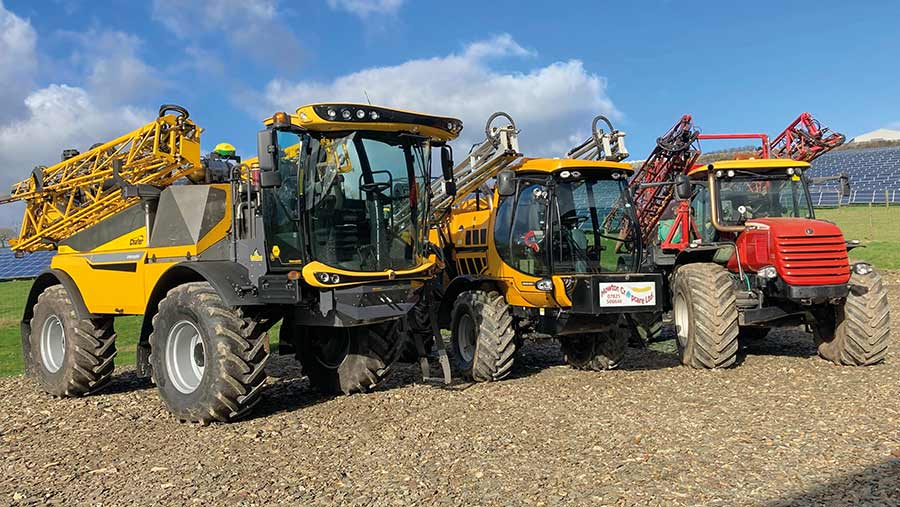 The business covers 16,000ha annually across a mighty 70-mile radius that stretches through most of Cornwall and west Devon, which means traversing the narrow lanes and hilly, sub-4ha fields of the West Country.

“We bought our first Agribuggy, an A280, in 2018 to run alongside the Multidrive,” says boss Dave Allen.

“It was the only thing we felt matched our requirements – it needed to be small, but with decent ground clearance, which ruled out a tractor-mounted sprayer, and it had to have a mechanical 50kph gearbox for the hills and roads.

“That eliminated the hydrostatic Househam Spirit and Bateman RB26.” 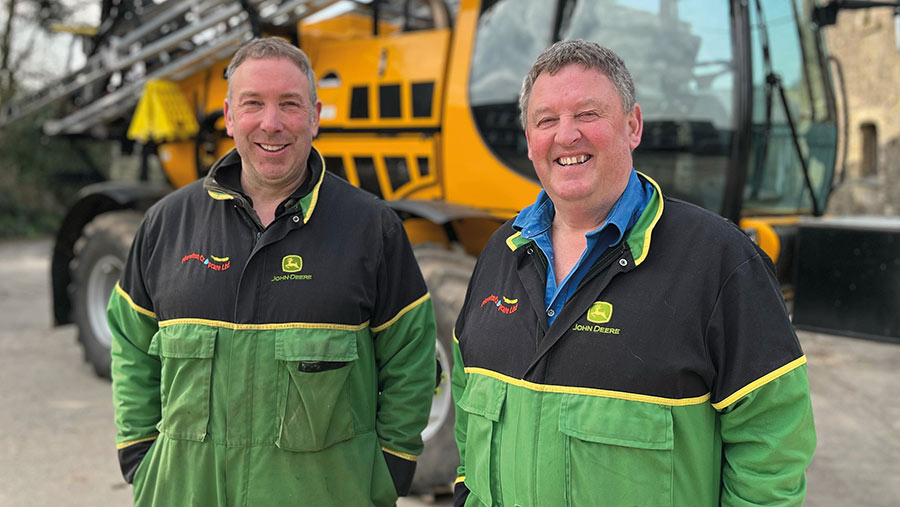 Howton’s A280 was one of the first models to roll off the production line in yellow livery, following the acquisition of Kellands by McConnel’s parent company, Alamo Group.

However, it suffered from its fair share of niggles during a three-year stay on the Cornish coast.

“It was a proper Friday afternoon machine and we had loads of petty electrical problems, particularly with actuators and switches playing up. We also suffered with pipes rubbing on the framework.

“I think it was caught in the transition phase from Kellands to McConnel – it was a new production team, so the manufacturing and assembly wasn’t quite up to scratch.

“That said, nothing major went wrong, it was all pretty cheap to replace, and it rarely held us up for any amount of time.”

As a result, it still managed to clock 1,500 hours and cover 6,000ha each year which, reckons Mr Allen, is more than most Agribuggys in the country.

“Though it sounds bad, it was actually a good tool, and we were really well looked after by our dealer, Halse SW, and McConnel.

“We only decided to upgrade because it was nearing 4,000 hours and we expect it to do a lot of work without any hold-ups.”

On paper, it offered plenty of improvements over the old A280, including a new engine, heavier prop shafts, larger axles, load-sensing hydraulics and a bigger tank – ironically things that hadn’t caused any problems previously.

The change of power plant saw the old Stage 3b Cummins block superseded by an “industrial” Stage 5 version of the same power.

It goes much better, according to operator Andrew Gillbard, and the heavier stroke delivers far more bottom-end torque.

“It typically drinks about 9 litres/hour, depending on road work and field size, which is a bit more than before – but then it’s marginally heavier.

“It’s still incredibly frugal compared with the Chafer, where its extra weight, bigger tank and more powerful engine adds up to 80-100 litres more diesel in a day, and that isn’t always reflected in output.” 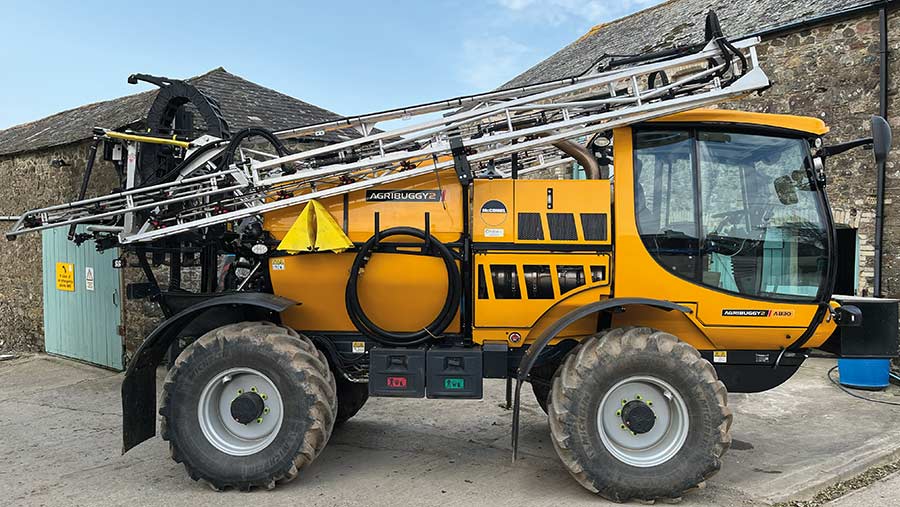 But he reckons the biggest improvement to be the addition of an exhaust brake, as the old model used to eat through brake pads.

“The only downside is service access. The engine bay is so tightly crammed that it’s a nightmare to get to anything – particularly the oil filler.

“I can only reach the cap on tiptoe and, though McConnel provided a long funnel to reach through to the rocker cover, the pipe didn’t fit the hole.”

“The AdBlue filler is badly positioned too, so it can only be topped up with small cans. The cab could probably have done with being slightly further forward to give a bit more space,” says Mr Gillbard.

McConnel remains in the sprayer maker minority by sticking with a four-speed mechanical gearbox with high/low ranges.

“It’s brilliant on hills and, though it would always be nicer to have more gears and potentially run at lower revs, it’s ideal for our workload.”

The biggest problem that Mr Gillbard and other Agribuggy users struggle with is less about the mechanics and more to do with the finish – in particular, mud splatter from the wheels. 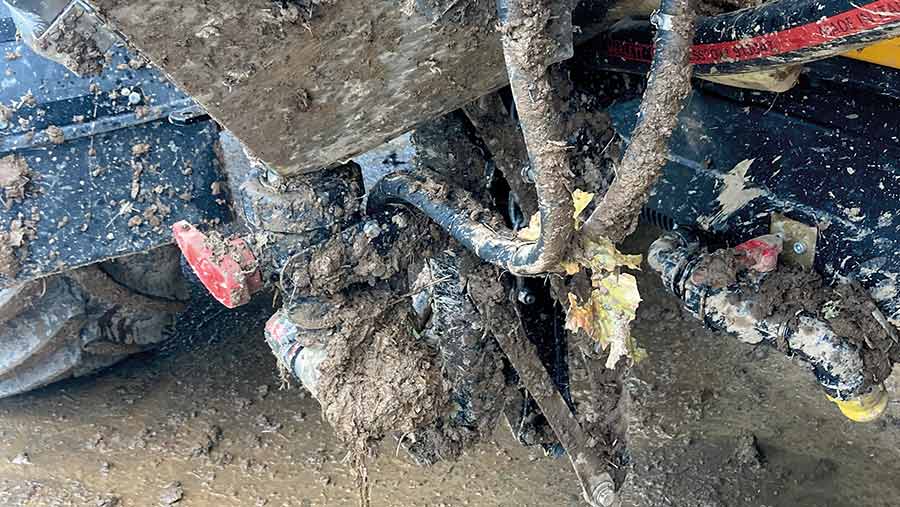 “The standard plastic mudguards only cover a quarter of each wheel, so the machine was getting caked during spring and autumn applications.

“I got fed up with washing it off every night, so resorted to making my own extensions from lightweight rubber. 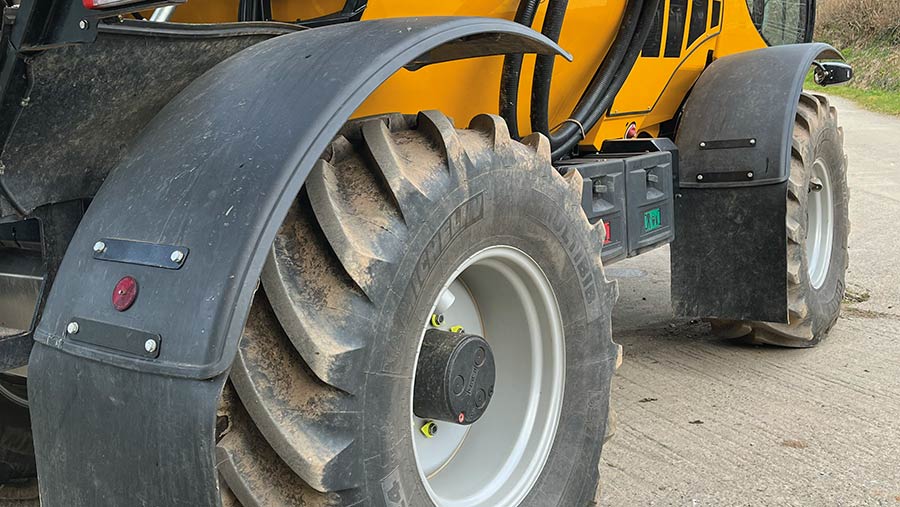 “It’s only solved half the problem though, and mud is still thrown forwards over the induction hopper and storage locker, so I plan to loop them all the way around the top half of the wheel.”

The same problem occurred around the pump and plumbing behind the tank – solved by fitting guards inside the rear wheels to offer some protection.

But the beauty of the low ground pressure concept is that it can get where others can’t.

“At 5.6t, it’s lighter than most tractors and, although its footprint isn’t much different to a bigger sprayer on bigger wheels, it leaves far smaller ruts.”

Tweaks to the cab

The long, narrow cab is one of the few elements to survive the Agribuggy update, albeit now fitted with wider steps to improve access.

The other notable improvement has come through the repositioning of the air conditioning system and a tighter cab seal, which has seen it achieve a Category 4 rating.

“It’s quieter than before, the heated, air-suspended seat is comfortable and the ride on the heavier duty leaf springs is far smoother – probably helped by the marginally longer wheelbase.”

“However, I’m going to replace the Command Arm armrest cloth as it’s so abrasive, and the trim is pulling away in places. I’ve been told that McConnel has now changed it on production models, too.”

It works fine, says Mr Gillbard, but vibrations caused a long-running issue with the steering module – something that has now been rectified. 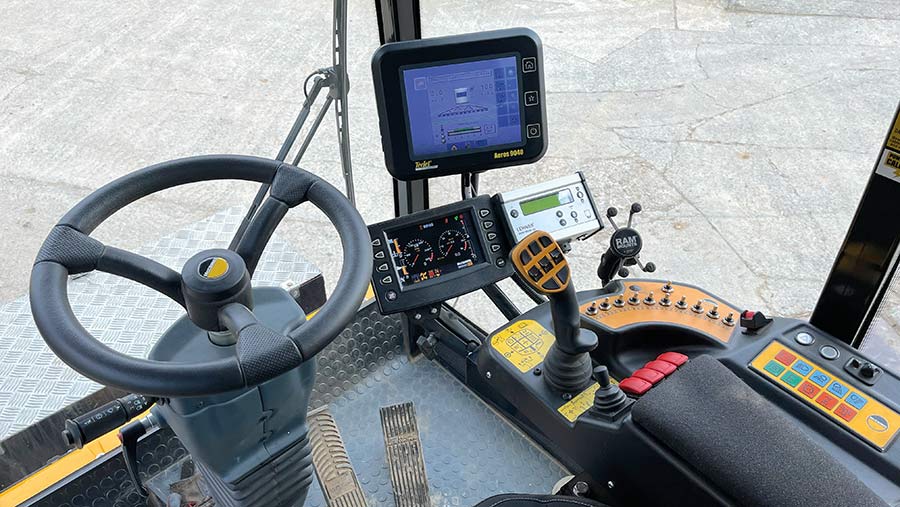 Though the five-cylinder, 335 litres/min spray pump is unchanged, big improvements have been made to the induction system.

In particular, the stainless-steel hopper – an optional extra (plastic is standard) – now has a hand release, which is a marked improvement over the old back-jarring foot pedal of before, according to Mr Gillbard.

The manual taps have also been supplemented with a few techy additions, including the ability to start and stop the pto, alter engine revs and show tank fill contents on a little screen in the filling area, in lieu of a standard sight gauge.

Instead, there are two options for checking the load – a TeeJet weighcell system that appears on the 8.4in spray screen, and an electronic float linked to the display above the induction hopper.

“It would also be nice to have a closed transfer system, though it’s not really an option for us as we’re loading from different sites all the time.”

Each body can carry five nozzles, which are typically 03, 04 and 05 Guardian Airs, a brown Quintastream nozzle for fertiliser, and a TeeJet LD04 flat fan that came with the machine.

The only minor alterations here were to fit a little nib on the tip each side to protect the nozzle body from contact with the ground, and to add extra LED work lights that shine both on the variable geometry boom ram and outwards to give better visibility. 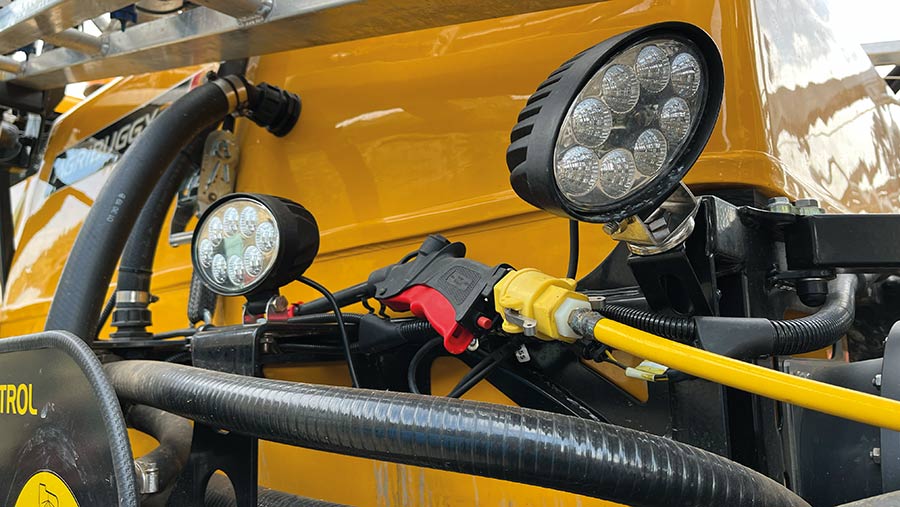 An additional 300 litres of spray tank capacity (now 3,000 litres) has also been welcomed.

But Mr Gillbard decided to replace the rope-activated drain plug system – which broke on its second use – with a conventional tap that sticks out underneath the induction hopper.

“We also asked McConnel to move the pressure filter. It’s a service item that needs to be checked daily but was unnecessarily awkward to get to at the back of the main spray tank.” 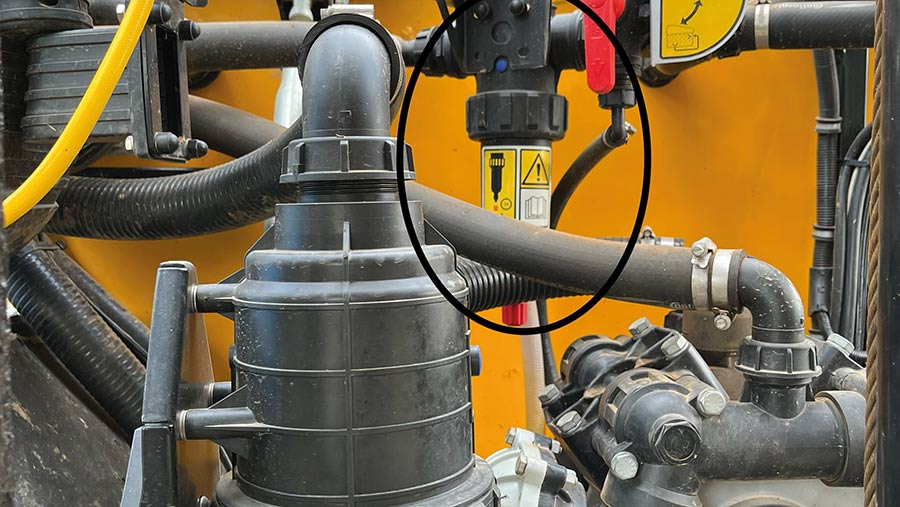 Modifications to the on-board storage include an additional eBay-sourced strap box mounted on a home-made frame above the induction hopper.

This saves constantly trudging around the machine to get to the original storage boxes on the offside.

There’s also space for a toolbox behind the seat, and a big box mounts on the slug pelleter bracket up front, which can be used to carry pipes, filters and a grease gun. 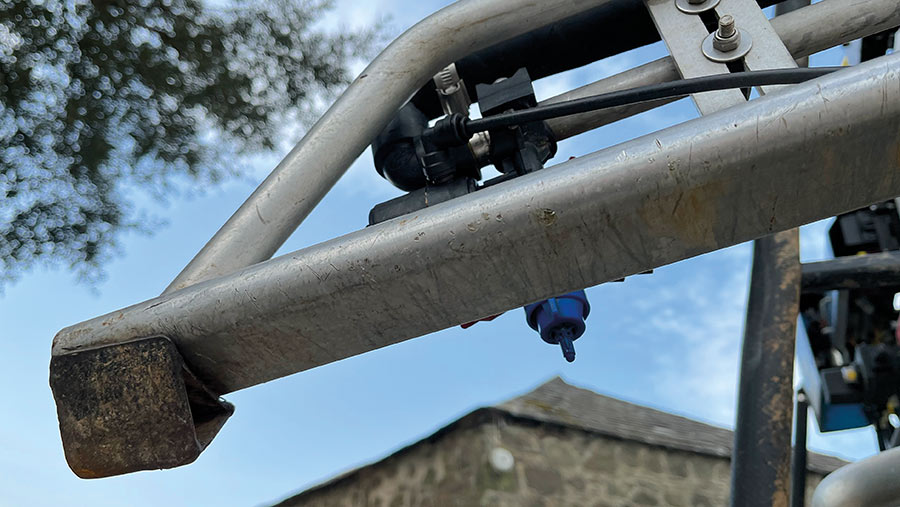 “Yes, we would – it’s a decent machine and lots of our customers want us to run a small, lightweight sprayer. Plus, the smaller engine is attractive given the cost of diesel and AdBlue,” says Mr Allen.

“The catch is the price. At £185,000, it’s not that much cheaper than a big frontline self-propelled.

“Our Chafer Interceptor was only 15% more and came with Norac boom levelling, electrically controlled plumbing, has a 4,000-litre tank and more power.

“I suppose that’s why this machine has a few shortcomings – McConnel can’t afford to make it any more expensive, so their hands are tied.”

✅ Frugal engine with plenty of torque

❌ Oil and AdBlue fillers tricky to get to

❌ Standard storage locker is on the far side of the machine 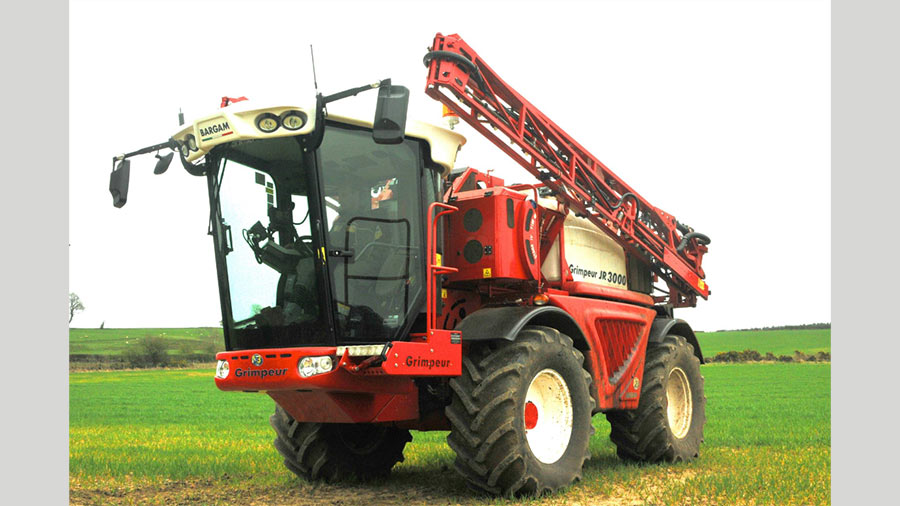 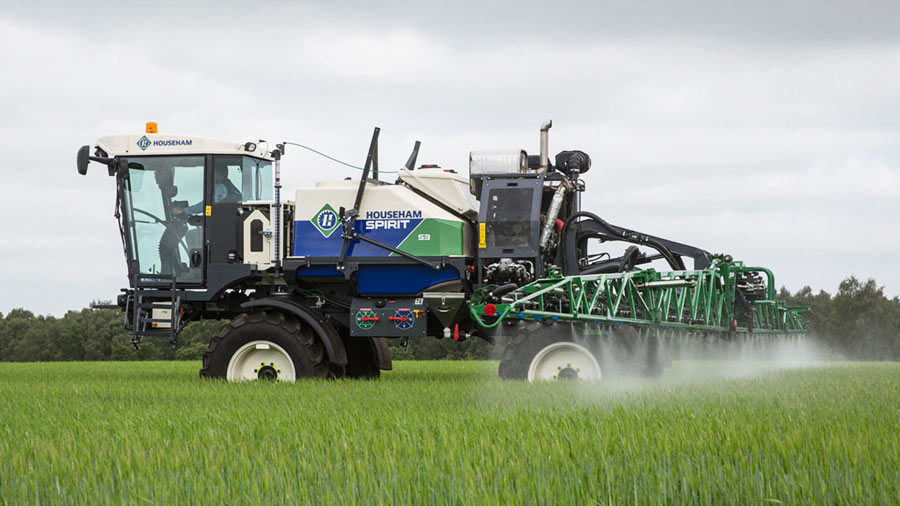 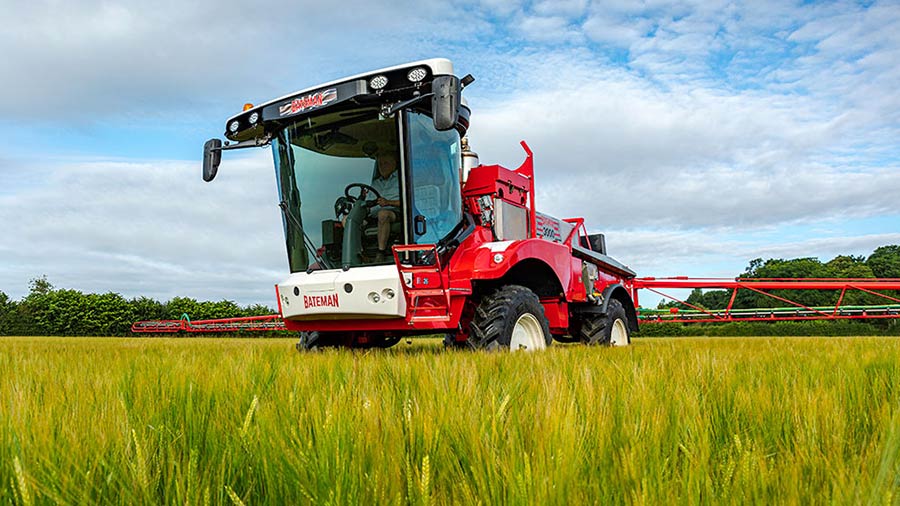