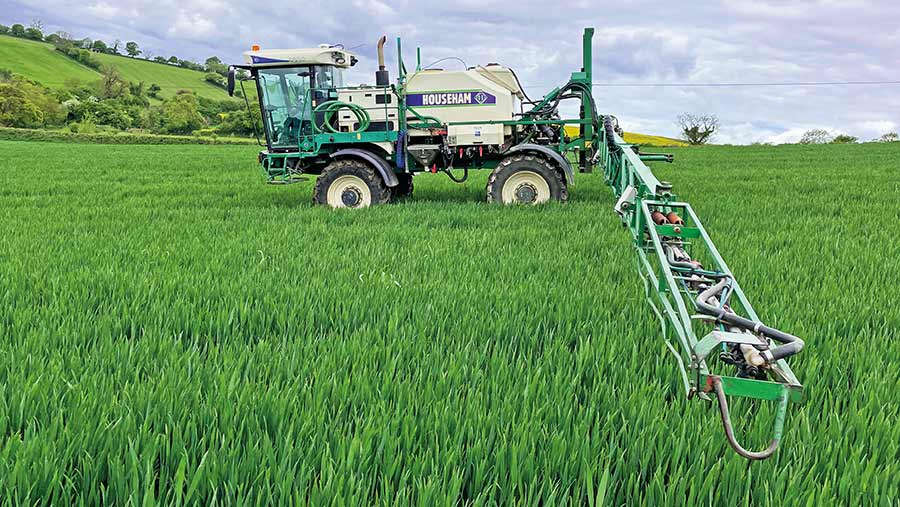 Somerset contractor Ashley Luke gives us the rundown on his 2014 Househam Air Ride with 3,500-litre tank and 24m boom.

Find out how he rates his sprayer, what he likes and what could be improved with the machine. 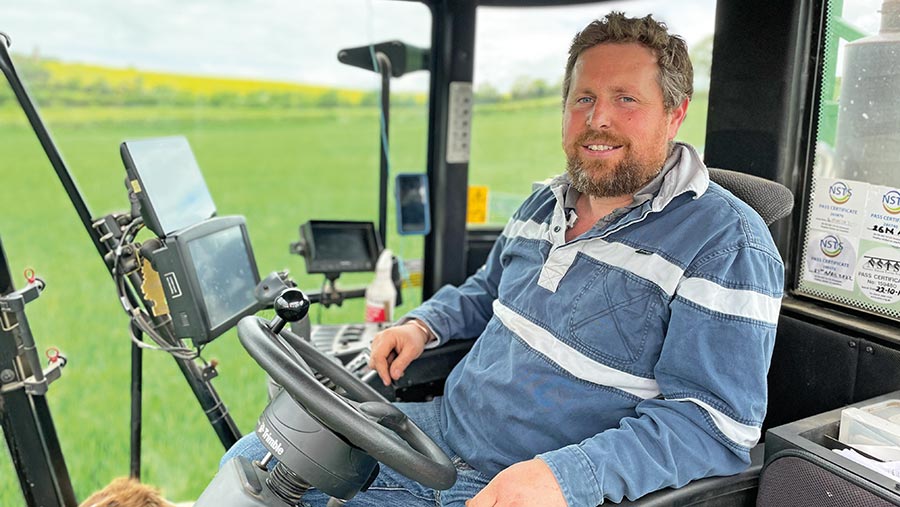 I’m on my second Househam Air Ride 3500, having moved away from running Knight self-propelled machines a few years ago.

They were decent enough sprayers, but the cab on the last 1840 model was appalling, particularly the badly sealed sliding door.

I also wasn’t a fan of the Muller controller that was about as easy to fathom as a Rubik’s cube.

It’s almost identical to the earlier model I had, but it’s got heavier-duty wheel motors and a higher-spec TMC spray controller, which I was keen to have.

It had been well looked after, but because it had been used to apply liquid fertiliser it was rusty in places. This doesn’t affect the performance, but it spoils the looks a bit.

I’m a fan of the Air Ride machines as they’re comfortable, compact, and have good controls that are logical to use. 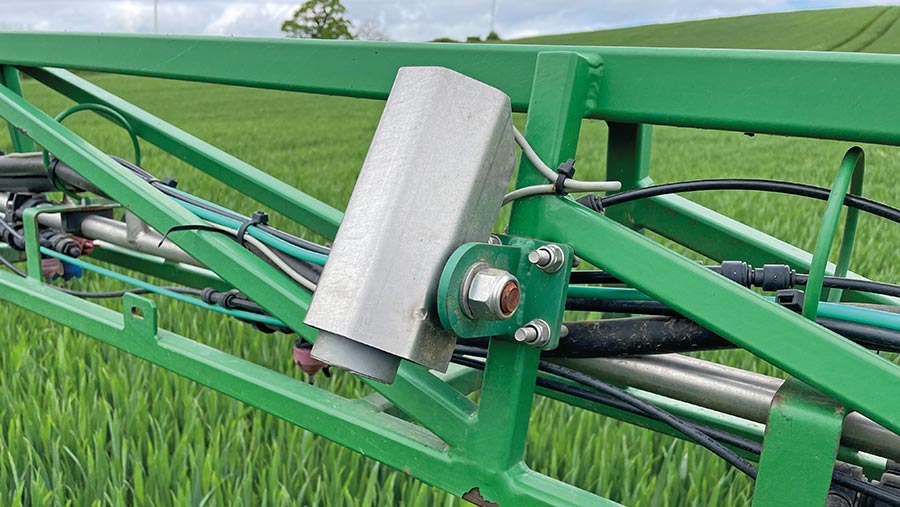 The previous owner specced the sprayer with Househam’s own auto boom height control, which is pretty rubbish, particularly on crops with an open canopy.

I find that it’s OK on pre-ems and uniform cereals, but it’s no good at all on oilseed rape or beans.

Part of the problem is that it’s only got three sensors on the boom, which means it can’t get a good reference on a more textured surface.

It’s also a bit slow to react, so I tend to switch to manual on undulating fields as I can see what’s coming and get ready to make the adjustment.

It’s also got a boom recirculation system fitted, but it still takes a while for chemical to get to the outer sections, and they take some washing out.

Other than that, the boom is strong and stable, and the variable geometry is great for following contours, providing it is adjusted manually.

I also like the headland assist function that automatically lifts the boom at the headland when the last section turns off and drops it again before the first one turns back on.

Another useful feature is the twin nozzle setup, with one rotating quad and one fixed nozzle in the same position.

This means I can switch between my two preferred nozzles from the cab. I have the option of using both together, but I don’t do this very often.

Most of the ground I spray – even that on GPS – has tramlines that are narrower than 24m, so at least one will switch itself off to avoid over-spray.

The heavier-duty wheel motors were another feature I was looking out for as we’ve got some steep terrain around here and I wanted some stronger units to withstand the extra strain.

Another bonus is that they have brakes, which is a first for me on a self-propelled machine.

I only use them for slowing down in an emergency as the hydrostat does most of the work, but they are handy for holding the machine steady on a hill before pulling off or changing direction.

The final addition is an autosteer system that I asked Ridgeway sprayers to fit for me.

It’s a Trimble setup with an EZ Steer motor mounted on the steering wheel, an XCN-1050 screen and a Nav 900 receiver running on the Rangepoint signal.

It’s transformed the spraying job for me, particularly on grass, and the signal is also accurate enough for me to spray cereals, providing they’ve been drilled using GPS.

LED work lights are also an upgrade I’m particularly pleased with. I got some good ones from UTV Products, which are incredibly bright and have made spraying in the dark far easier. 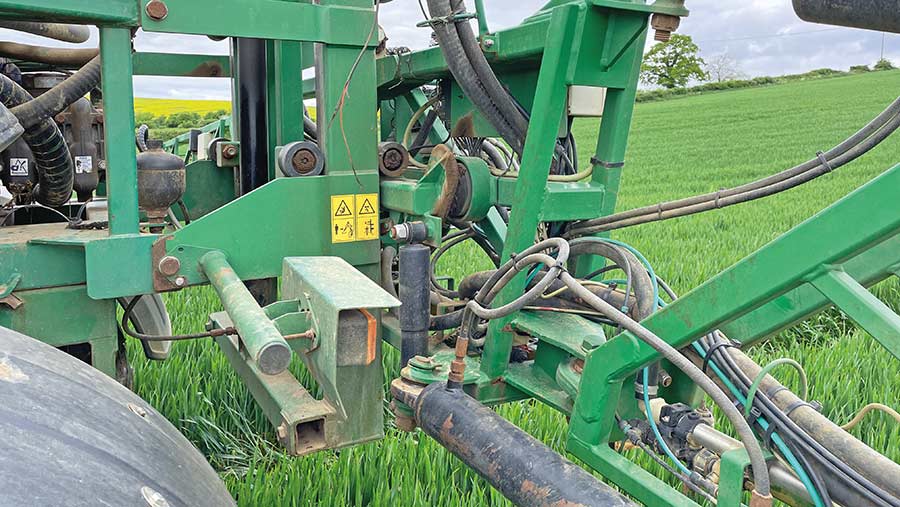 I know some people have had problems with Househam sprayers, but I’ve had nothing significant go wrong with mine – or the one I had before.

From a driver’s point of view, I think it’s far nicer to operate than an equivalent age Bateman, with more logical controls, a smoother ride and a more compact boom frame that makes it easier to manoeuvre.

The TMC spray controller is particularly nice to use, and it works well with the Trimble GPS. It’s much slicker than the display I had in the old machine that used to freeze every now and again.

I think the cab is well laid out and comfortable, but it is let down slightly by the air conditioning.

I always have the dog with me in the cab providing a bit of extra heat and on a hot day I’m often on the verge of overheating.

The autosteer system has been great, but when I first had it installed, the engagement was so harsh it used to whip the boom on the headland and it took a while to settle down again.

I put up with it for too long and used to dread using it, but a recalibration of the settings got it working perfectly.

Tyres are also worth a mention. I’ve got Michelin Xeobib 600/ 60 R28 flotations and I’ve been seriously impressed with them in the wet.

I run them at about 1.5bar so they give a large footprint, which allows them to grip well and means they don’t sink in. Off the back of their performance, I’m keen to get some better row crops.

Although I’m happy with the Air Ride, I would like a 4,000-litre tank to give me more flexibility. I would consider another Househam, but I’ve also got my eye on a Sands. 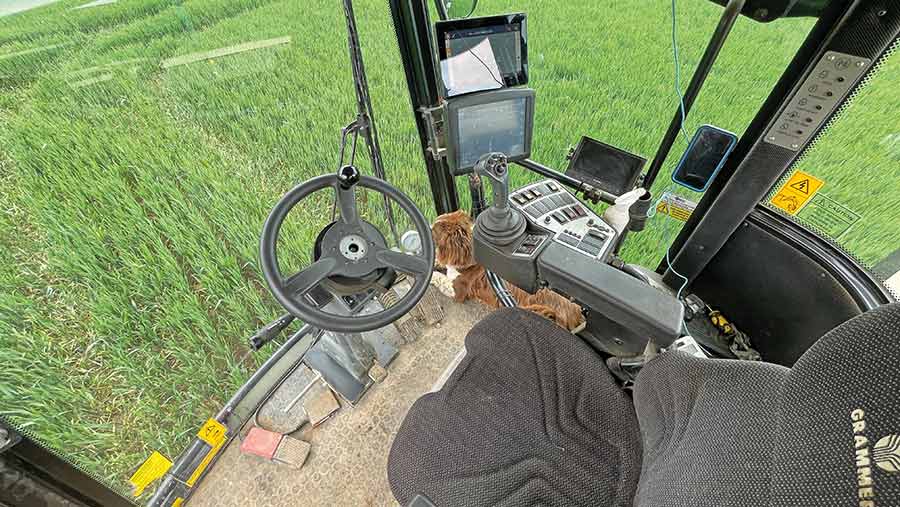 I spray at 10-14kph and mostly at 100-litres/ha, upping the water volume to 200-litres/ha for pre-emergence sprays and some grassweed control.

Blue 03 Guardian Airs are my most frequently used nozzle, but I also like using Defy 3Ds, particularly on grass. The only problem with these is that they wear, making them an expensive nozzle to run.

I’ve also got some red Guardian Airs for 200-litres/min, some brown ones which don’t get used much, and some flat fans, which hardly ever come off the shelf.

There are some very good agronomists in my area, and I discuss nozzle choices with them. They also let me know how effective applications have been so that I know what works in different situations.