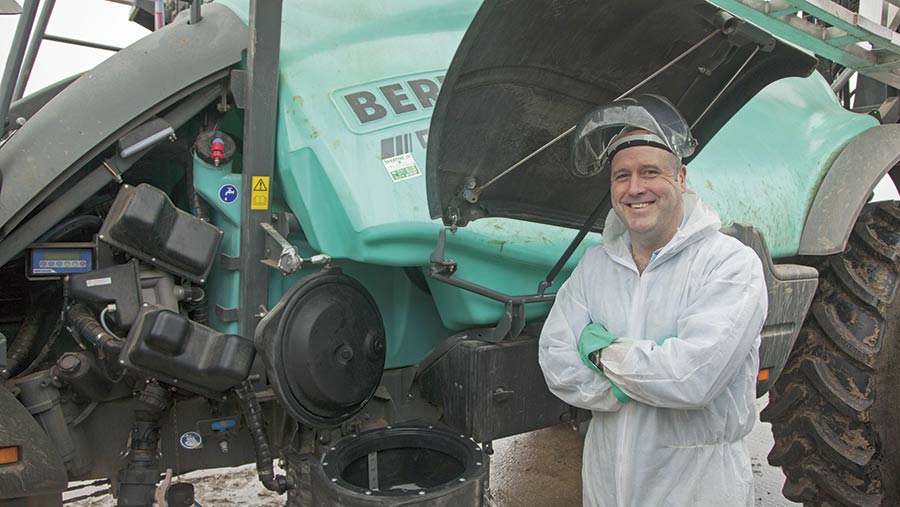 Berthoud’s new Vantage trailed machine won the affection of Essex grower Gavin Rowsell when he changed his sprayer last summer, seeing off other suitors with the promise of top after-sales support.

Cropping 500ha of heavy London clay with his daughter Shannon at Brickhouse Farm, Maldon, Mr Rowsell has been running trailed sprayers since he returned from college in 1989.

The most recent was a Hardi Commander and although it was a brilliant sprayer, he says the local dealer struggled with technical backup from the start and the Danish manufacturer itself has only a limited physical presence in the UK.

Although he says it was a quality sprayer, Mr Rowsell became frustrated with electronic glitches on the high-tech machine and with limited support to solve them, the farm took the decision to change last year.

Shannon did some market research and a shortlist of three was drawn up that included two from German makers Amazone and Horsch and one from blue-liveried French company Berthoud.

Both the Amazone and Berthoud ticked a lot of boxes for the farm’s requirements, but the factor  in the French machine’s favour was the proximity to a Berthoud agent – Thaxsted-based application specialist Spraytec.

“We use Spraytec for our repairs and MOTs and we know the local rep well. They don’t do much else apart from sprayers and pelleters, so they are very focused [on application] and that did it for me,” explains Mr Rowsell.

Replacing the outgoing Tenor range, the Vantage was available to order last March and had its official UK launch at Cereals 2017.

Mr Rowsell took delivery of the UK’s second Vantage in late April and it was straight to work in the middle of a busy spring schedule, spraying his winter and spring wheat, lucerne plus maize produced for a local beef producer.

The high-spec 5,500-litre capacity machine has a 550-litres/min twin turbine pump and aluminium booms as standard, something that fitted in well with the farm’s recent transition to liquid fertiliser.

The stability of the 36m span – aided by the as-standard axle and drawbar suspension and Berthoud’s new optional Active Roll ultrasonic boom height control feature – is something Mr Rowsell describes as “baffling”.

“It is unbelievable how stable it is,” he says. “The only issue with the boom is that it doesn’t fold down to 24m, which we’ve needed to do in the past for contract spraying.

“Although we aren’t doing any contracting at the moment, Shannon may want to in the future, so it is a shame and something that almost swayed us away from the Vantage,” he adds.

Among the other optional extras on the machine are six additional sections to give 15-section boom control for increased accuracy in short work, plus steering axle tracking and a hydraulically driven spray pump.

The latter is something Mr Rowsell has been particularly pleased with, as on the previous setup a battle between the link arms and the pto shaft raged if the tractor’s rear wheels dropped into any deep ruts.

The John Deere 7930 pulling the sprayer also sits at lower operating revs, improving fuel efficiency, and the hydraulics are impressively responsive – an area where the Vantage outperformed a Deere machine that was trialled on farm, but never made the shortlist.

“Modern tractors have the oil flow to cope, so that isn’t the difference. Some other makes don’t seem to give the right priority to the pump and booms, whereas the Berthoud goes up when you want it to and doesn’t let the booms drag,” he explains.

The sprayer came equipped with Berthoud’s optional ISO Tronic sprayer control, which works through the tractor’s Isobus terminal and eases clutter in the cab.

The E-Pilot remote control also allows Mr Rowsell to control all the sprayer’s hydraulic functions within a 20m radius of the machine, handy for switching the system on and off to check nozzles and spray lines up close.

If there are any issues with the Isobus or an emergency change is required to a tractor without  Isobus functionality, there is a spare sprayer touchscreen control on board to keep operations running.

Mr Rowsell says: “It’s locked away under the front hood and there’s enough cabling to reach the cab. It’s great to have that backup and I think it’s a very clever idea from Berthoud.”

Machine of the Year

The Vantage won Machine of the Year at Sima 2017, but as with any new range, there will undoubtedly be some gremlins to be addressed.

Having taken one of the first machines to arrive in the UK, Mr Rowsell says Berthoud’s support has been strong, with technicians coming over from France several times to discuss functionality.

He says they have been very proactive in addressing any issues or additional requirements.

Mr Rowsell’s biggest gripe has been the positioning of the induction hopper, which is tucked too far under the tank’s belly, making operator access more awkward than it should be, particularly when emptying and rinsing larger product containers.

“Berthoud is fully aware of the issue and have already made some modifications to the machine and are working on more for the future,” he says. 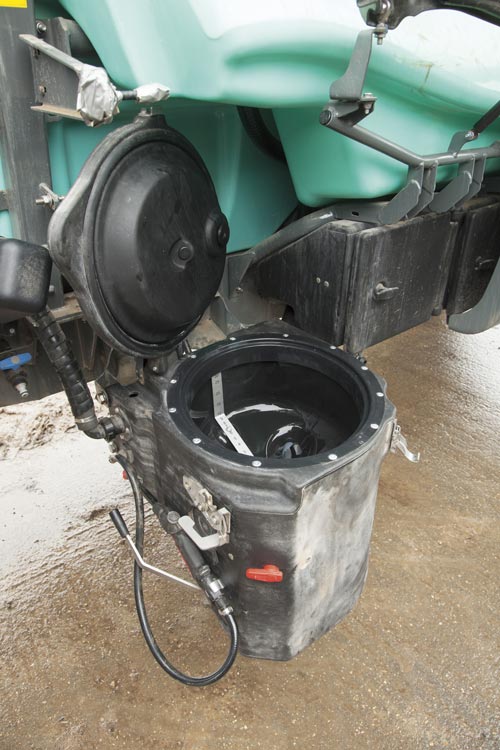 The only other requests Mr Rowsell has made of the manufacturer are for some increased functionality on the filling control panel next to the induction hopper and a revision of the positioning of the LED boom lights.

“They shine along the boom and because I’m usually using angled nozzles, it doesn’t light up the spray pattern as well as you’d like at night,” he explains.