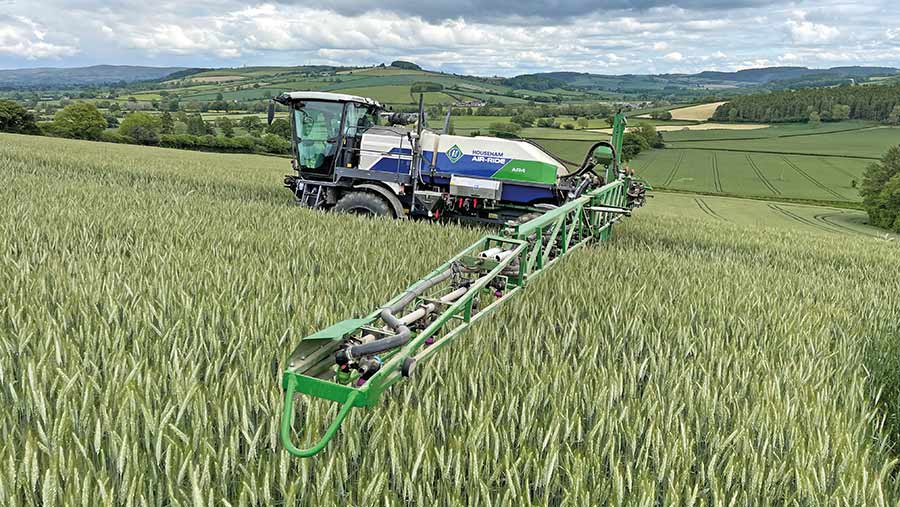 It’s the third Houseman Air Ride in the company’s fleet and comes with a high spec as standard. Find out what extras they added to get even more from the sprayer. 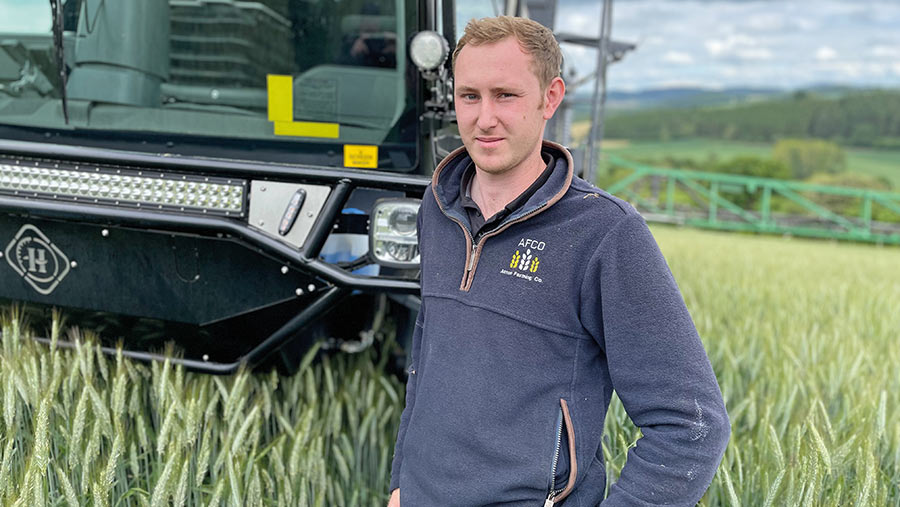 We recently took on some extra spraying work, so added a third Househam Air Ride to help us cover the area.

This one is an AR4 Xtra, meaning it comes with a high standard spec, a 4,000-litre tank and, like all our sprayers, a 24m boom.

It’s almost identical to our 2020 AR4 Xtra, but has the new Claas cab rather than Househam’s own Excalibur version.

It runs a 240hp, six-cylinder MTU engine and hydrostatic transmission with four drive modes, as well as the heavy-duty Sauer Danfoss wheel motors.

We like the Air Ride sprayers as they’re reliable, comfortable and easy to operate.

Plus, we’ve got a great engineer locally, Jamie Fryar of JFS Services, who helps look after them and deals with any problems we have.

The Xtra spec meant the sprayer came with a lot of features included in the package, such as a six-cylinder Altek pump, 12 boom sections and the Headland Assist function that automatically raises and lowers the boom at the end and start of a bout..

There’s also better lighting than the standard model, including LED boom lights, plus a reversing camera and TMC screen in the cab.

We did add a few extras though, one of which is auto-steer with Househam’s Navguide guidance that works to an accuracy of about 10cm.

It’s handy for spraying grass, but it doesn’t work to fine enough tolerances for tramlines – we’d need RTK for that. 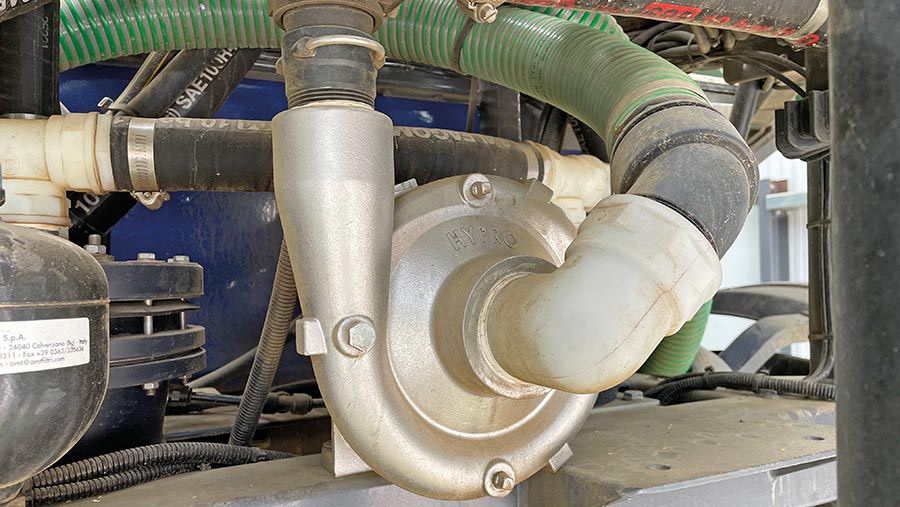 Another is a Hypro centrifugal pump for fast-filling liquid fertiliser, which we’re doing increasing amounts of.

It has an output of about 700 litres/min and means we spend a lot less time waiting between loads.

We also specced some additional protective wrap over the wiring to help safeguard against corrosion.

For the nozzle bodies, we opted for Hypro’s Duo React system with a fixed nozzle and rotating quad that you can flick between in the cab.

A simple turn compensation function is also included, which will switch between the nozzles automatically to adjust the rate at different sections.

It’s only done 240 hours so far so it’s a bit early to say. However, based on the performance of our other Air Rides, we shouldn’t have too much to worry about.

The obvious change from the old model is the Claas X10 cab, which is quieter, larger and has a lot more storage space.

There’s a big glass area that means visibility is good all round, but the downside is that it can get seriously bright in there on a sunny day. I think a darker tint on the rear window would improve it.

The X10 is an improvement over the Excalibur one we’ve got on the other sprayer, but there’s not as much in it as you’d think. That is still a good cab and I certainly don’t mind getting back in it.

One of the things I like about the Air Ride is that it’s so easy to set up and drive.

This isn’t as important if you’ve only got one driver who knows the machine inside out, but here we swap between machines and have different drivers on the seat.

If I need to go off to a different job, I can show one of the other lads how to use it in no time.

The boom is another strong point, with a compact design, good suspension and yaw damping that keeps it stable. Ours has fixed geometry and no auto-levelling function, which is fine for 24m.

I never feel like I need auto-levelling, but variable geometry would be nice in some of our more undulating fields.

We used to have it on a Merlin model a few years ago and it did come in handy from time to time.

Other features I like are the Headland Assist function, which automatically raises and lowers the boom on the ends to keep it clear of the crop when turning, and the auto-section control wizard.

This makes it simple to adjust the timings of switching sections on and off, by telling it what the problem is and letting it sort it itself.

Less good are the blue night spraying lights, which don’t have enough power to illuminate the whole boom. We’ve got a much better set on our older Air Ride, so I’m tempted to get the same for this one.

As for the engine and drivetrain, it’s got plenty of power and can put it to the ground very well.

If I were being picky, I’d like to have traction control, so that if one wheel starts to spin, it would slow it and send more power to the others.

Sometimes one will start to lose grip going up a hill and it would be nice if it could balance the power out a bit better.

One problem I would like Househam to sort is the fact that there’s no room to get an AdBlue nozzle in the top of the tank, as it’s positioned too close to the step above.

I’ve got a selection of Hypro Guardian Air nozzles on board that cover most eventualities.

Typically, I spray at 12kph and 100 litres/ha with an 025, occasionally switching to 03s, which I run at slightly lower pressure to give a larger droplet size.

I’ve also got a set of 04s, which I use for 200 litre/ha spraying and applying foliar feeds. 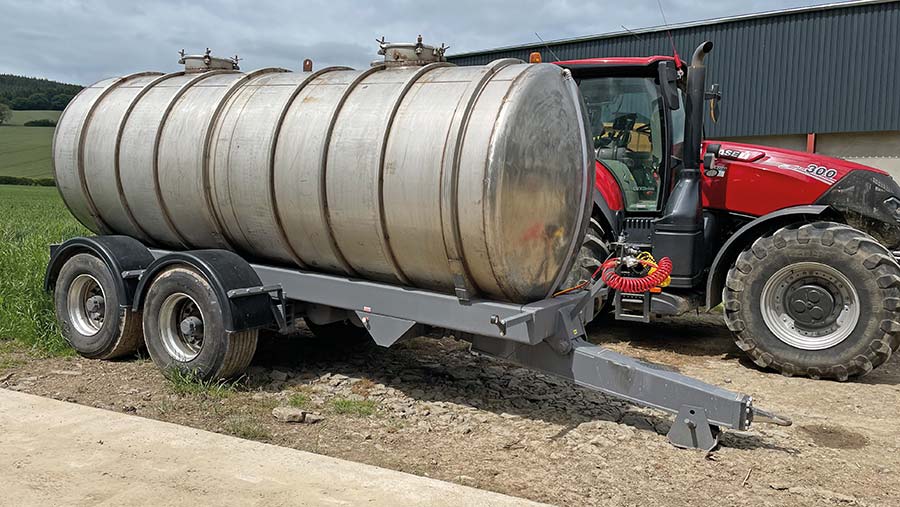 For liquid fertiliser, I’ve got Hypro FC ESI nozzles in light blue 11010 and light green 11015 sizes. These have six outlets and do the same job as a dribble bar, but are far neater and easier to work with.

As I’ve often got a liquid fertiliser nozzle fitted, I haven’t made best use of the Duo React nozzle body and the turn compensation.

I’d like to properly get to grips with it this autumn as you can see the effects of under-dosing in some of our field corners.

By switching to a larger nozzle on faster-moving boom sections, I’m hoping to see a reduction in this.

We’ve got a good, purpose-built chemical store and filling area that was part-funded by a Severn Trent Steps grant.

The store has a roller door with no threshold, making it easy to drive in with pallets of chemical. The floor then slopes to the rear, so any spills will run down to the bunded section.

Next to this we’ve got a covered filling area that drains down to a sump, with a pump to feed washings into a bio bed made from three IBCs.

There’s also a washdown area outside, so that we can clean the sprayer down properly after we’ve been applying liquid fertiliser.

Water is stored in a 5,000-litre tank and we’ve got good enough water pressure that this will keep us going with the 4,000-litre machine.

A future project is to do some rainwater harvesting that will help reduce the amount we need to draw from the tap.

Our main customers have also got good filling areas, so we’re relatively well served when we’re away from home.

For the liquid fertiliser, we’ve got three bowsers, one of which was custom-made by local engineer Powell James.

This has got commercial running gear, a 14,500-litre stainless-steel tank and pump powered by a Honda engine.

The other two are 13,000 and 10,000-litre Enduramaxx tanks secured in grain/silage trailers. These do the job and make good use of running gear we’ve already got.