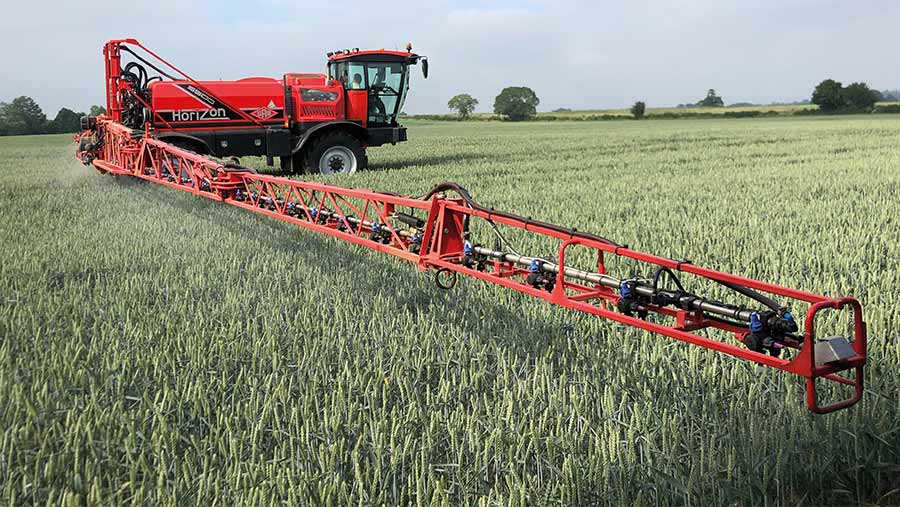 He tells us how it has performed and why he made the switch to Lechler’s low-drift, three-star-rated nozzles.

We upgraded our Sands Vision 4000 to a new Horizon 5500 model a few months ago. The old one had clocked 4,500 hours and just completed its fifth year, so it was due for a change in line with the business’ five-year replacement policy. 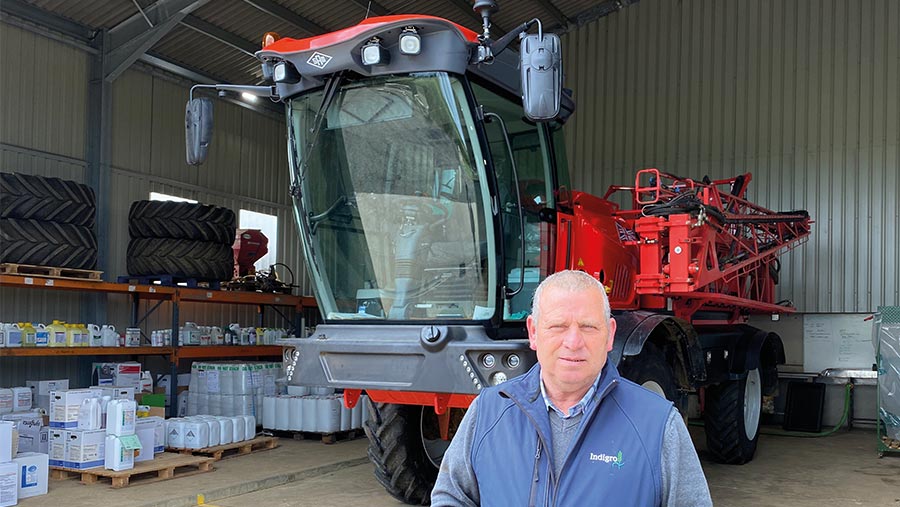 We also ran a Knight demount on a JCB Fastrac during busy periods but, as we’ve gone from 24m to 36m booms, it’s up for sale.

The mid-season switch to wider booms has been a bit of fun, but wheelings are money and it can make a significant difference in big fields. We don’t have any tramlines on areas drilled by the Cross Slot, which has reduced run-off and guarantees whatever we’re spraying reaches the plant. We’ll have to wait and see whether we will be left with green crop in the wheelings come harvest. On the flip side, we don’t gain much from going to 36m in the smaller fields, of which we have plenty.

Increasing the tank capacity to 5,500 litres has also made me more self-sufficient, particularly as I never spray at rates below 120 litres/ha. On a good day, I can cover between 200ha and 240ha.

We had a look at different options before committing to Sands but, at a bit over £200,000, it was very reasonably priced. The only other candidate for us was a Chafer, but Sands has served us well and there is no faulting the machine – in particular, it’s comfortable to drive, which is important considering I’m clocking 900 hours a year and doing a lot of road miles.

We kept the spec fairly basic – the only parts of the sprayer that are really worth spending money on are the booms and nozzles.

With that in mind, we went for variable-geometry booms with the twin-line Duo React single and quad outlets to give maximum nozzle flexibility.

I have 18-section shut-off across 36m, but I’d like more. Pulse-width modulation is the way forward for accuracy and we may well go for it next time, but it’s so expensive at the minute and hasn’t been in the UK long enough for everyone to understand its flaws.

The reality is that we can’t keep overdosing on corners, so one way or another we will have to try to fit it into our budget. Hopefully the cost will come down in the next few years. 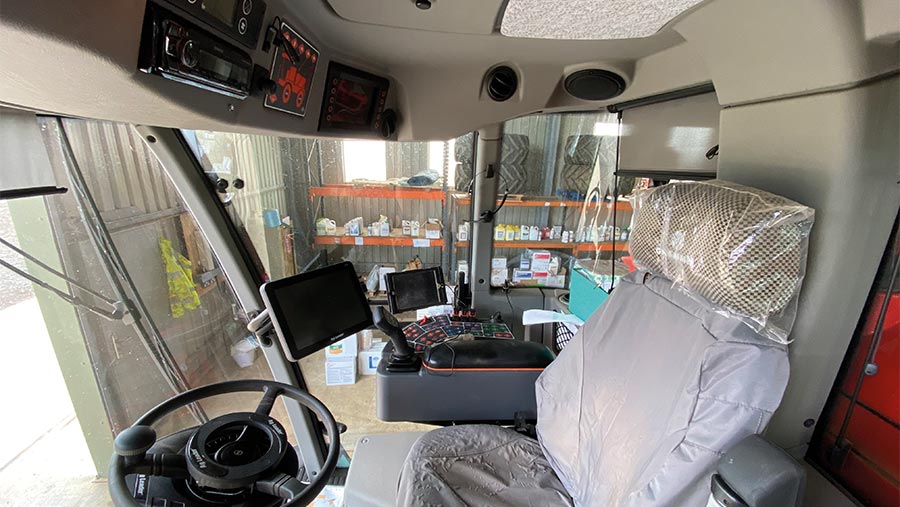 I’m also keen to trial the closed-transfer system, which should clean up the filling process and hopefully lead to reduced plastic waste.

We stuck with mechanical valves to control the filling process, as Sands’ automated electric tap system has a list price of about £3,500.

Over the near 500 hours we’ve clocked so far, there has only been one niggle – a problem with the turbo. However, a specialist from Deutz came out and it was fixed within a day. It’s typical of Sands back-up, which has always been great.

However, it’s not light. I weighed it to check the manual tank gauge was accurate and it came in at 10,750kg empty and 16,250kg full. I tend to lower the pressures on the wider Michelin 420/85 R34 VFs when traction is a problem, but set and forget on the taller 600s.

The Hypro Duo React nozzle bodies have been really good. The spray line runs to a single and quad outlet and gives me plenty of choice in matching the nozzles to the conditions. I always used to run flat fans, but I simply wouldn’t get through the workload any more, as every day needs to be perfect.

Instead, everything I use is Lechler low-drip and three-star rated, which reduces the buffer zones. I also regularly change the pressure filter in the spray line, swapping between 80-, 50- and 30-mesh to stop any muck reaching the nozzle filters. 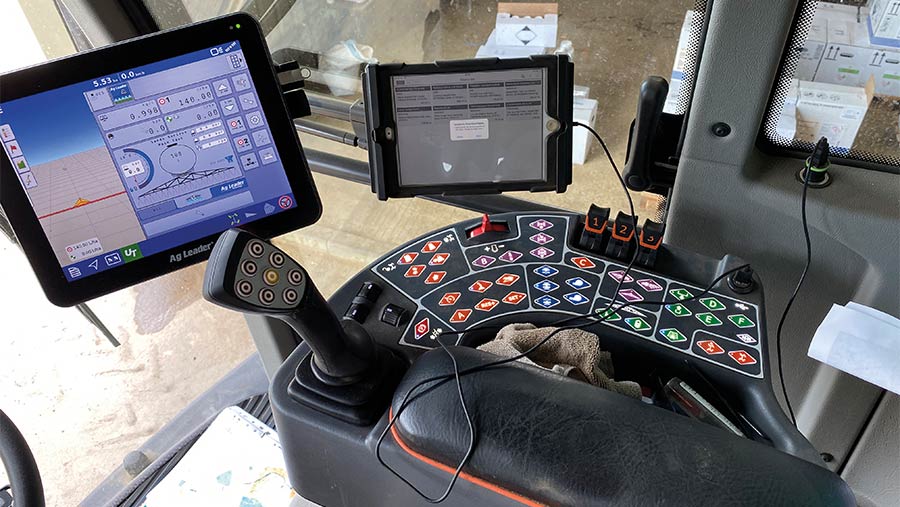 Pre-ems usually go on at 200 litres/ha and I work on the “time over target” mantra, so forward speed tends to be 10-12kph, though I’ll travel at 14kph for some fungicides.

I’ve done a lot of water volume testing over the years and resistance problems are undoubtedly stemming from reduced volumes. I’m sure people would approach spraying differently if they could see pounds coins coming out of the nozzles.

I’ve been impressed by the Norac levelling system on the variable-geometry booms, particularly as we didn’t have anything on the old sprayer. However, the folding system could be a bit quicker – it takes 40secs to unfold and 45sec to fold. Given we have one 100ha block made up of 23 fields, the time can really add up.

The new cab is a big improvement, too. Views are decent and we run Ag Leader’s In Command 1200 screen, which is one of the easiest I’ve ever used. Terrastar correction signal is accurate enough and the retrofit auto-steer steering wheel is smooth and runs as straight as a die.

I learned a lot about spraying systems in my previous job. At the main farm, we have a purpose-built spray store, biobed and fill-up area, including a 20,000-litre water tank, which has no problem keeping up with the sprayer on pre-ems at maximum output.

They’re by far the most important sprays but, because of the weather, we missed a lot of them last year. Sadly, that means blackgrass is going to bounce back and there is going to be huge pressure to get it back in check. It’s a real shame, as we worked very hard and spent a lot of money to get things cleaned up, only to be hit by a nightmare farming year. No doubt it will influence our cropping decisions.

We have stores and water supplies on the other farms we cover, as well as a 16,000-litre bowser that can be hauled to different sites. Everything is on 2in plumbing, so I’m used to a 15-20min fill time.

We use the Greenlight system to record spray records on an iPad in the cab, which syncs them to the office and agronomist, and also automatically uploads them to Muddy Boots software.