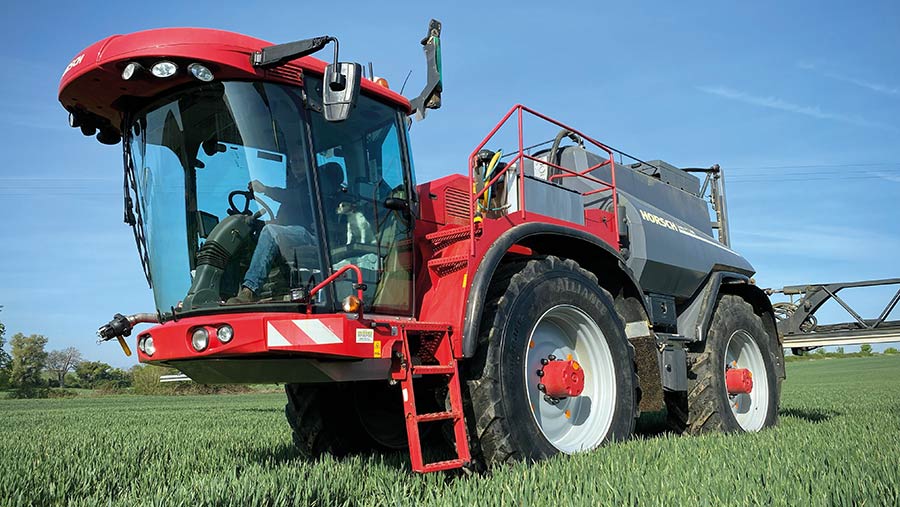 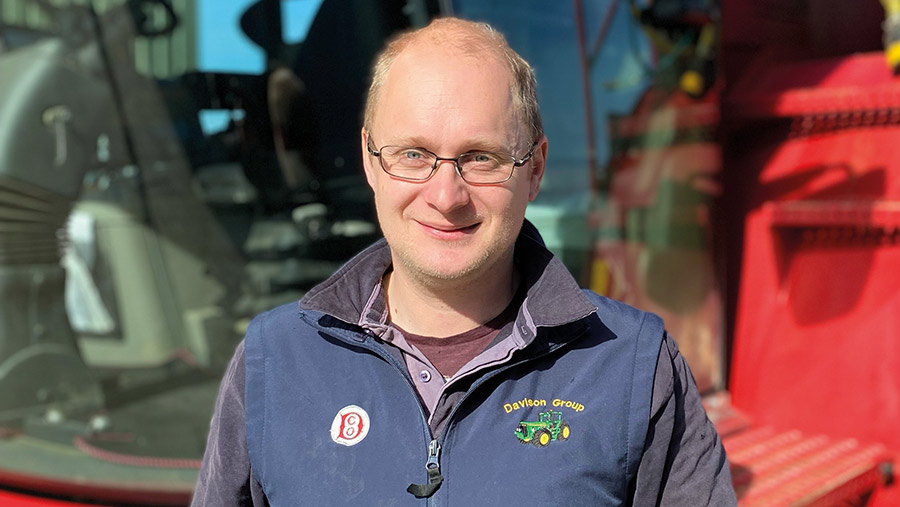 The biggest attraction was the boom suspension, as we’d struggled with stability on the Chafer. It tended to see-saw up the field and, as a result, little patches of blackgrass started to appear whenever the boom swung to its highest point.

We demoed Horsch’s trailed sprayer before deciding that we could justify a self-propelled on our acreage. In the end, it came down to which out of Horsch, Agrifac and Challenger could deliver us a machine in time for pre-emergence applications. Only Horsch could do it, and it has worked out perfectly.

The plan was to run it for seven years, which takes us to October 2023. And with lead times for new machinery as they are, we’re now looking at our options.

Ideally, we’d like to stick with an 8,000-litre tank but the only alternative is Agrifac, which we’re not too fussed for. We had a Rogator on demo, which would mean dropping down to 6,000 litres, but unless there’s a cavernous difference in price, we’ll probably stick with what we know.

It has done us well, the boom accuracy is fantastic, and the big tank means I can put all the pre-ems on at 200 litres/ha without constantly refilling.

We also get on well with our dealer, Olivers. Breakdowns are inevitable, but their backup is great and, if they don’t have a part in stock, we can nip to the Horsch UK depot in Peterborough. 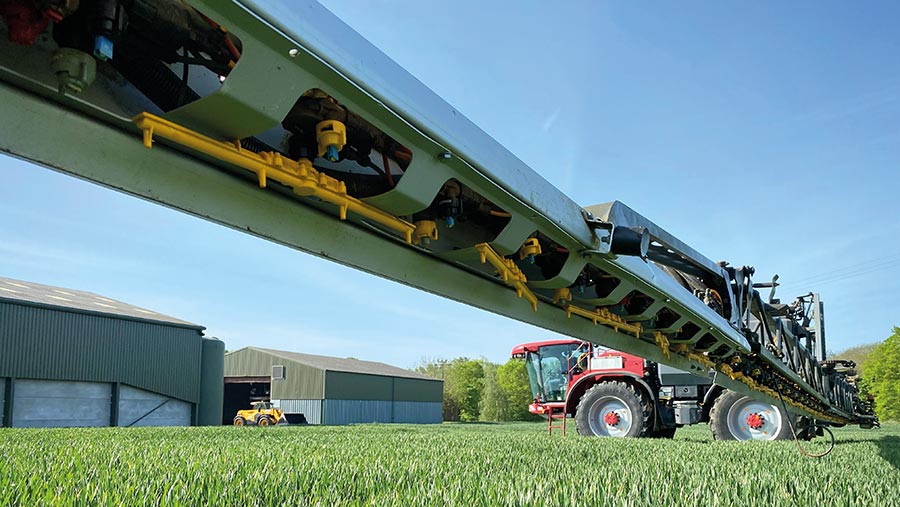 We’re at 36m with Horsch’s four-sensor Boom Control Pro Plus package and a 2-2 nozzle configuration. This gives me loads of flexibility, with a twin body every 50cm and another two outlets at the 25cm intervals between them.

We’ve got a 12-section setup that works automatically through the Muller screen. It’s pretty accurate, but if we don’t go to single nozzle switching on the new sprayer then we’ll probably upgrade to 18 sections, as the stuff going in the tank isn’t getting any cheaper. Pulse-width modulation is interesting, but I suspect the cost might outweigh the benefit and individual nozzle switching is probably a better balance of outlay and efficiency.

I’ve been trying out a prototype of the Pentair Hypro EasyConnect closed transfer system for the last couple of years. It’ll empty a 10-litre can in an instant and is obviously cleaner and safer than pouring chemical in by hand.

I had to make a few modifications to the sprayer to get it working, including mounting a bracket at the top of the steps to store it and another alongside the induction hopper to hold it while it’s in use. I also extended the nearside front mudguard to try and keep the mounting bracket clean.

The current stumbling block is that our chemical isn’t delivered with EasyConnect caps, so if I want to use the system then I have to swap them over before I fill. That’s obviously a right faff and means I don’t tend to use it much, but John Yeoman, our Frontier agronomist, reckons that should change by the start of next year.

The hardware also needs a bit more development. For starters, it’s hard to tell whether all the residue has been washed out of the bottom of cans that aren’t see-through, and it needs two hands to operate the release – and a third to actually hold the container.

One other alteration I made was to fit a stainless-steel lorry locker behind the cab for spares, tools and jugs, as the standard configuration was seriously lacking in storage space. 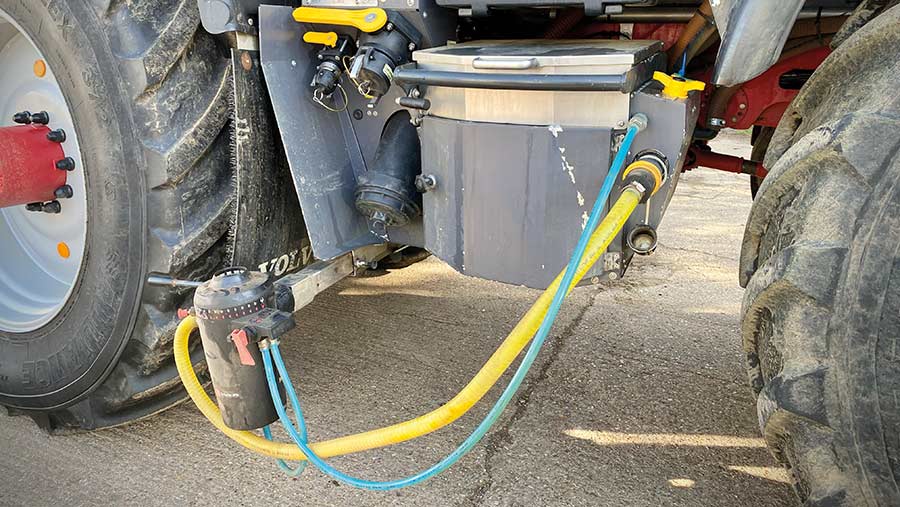 It had been pretty good until last autumn when I noticed oil leaking out of the hydrostatic transmission pump.

Luckily, I caught it early, as when Olivers took it apart they found the output shaft was completely on the wonk. We decided to replace the whole unit for £12,000, rather than spending almost the same amount repairing it with no guarantee that it would last.

In terms of in-field performance I don’t think there’s anything to match Horsch’s boom control, and having the big tank and wingspan means I can cover the best part of 50ha/hour in good conditions at 14kph.

The fact that it does 50kph on the road is handy too, as I travel across a 10-mile radius. However, it’s like driving an ocean liner and, though it’s perfectly capable of doing the speed, it wallows a fair bit on uneven roads.

We only have one set of wheels – Alliance 580s – that stay on all year. A few people in our area have abandoned row crops, as the 42in rims are awkward to change and being on 36m tramlines makes skinny wheels less important. It also saves making such gnarly ruts if the soil is soft later in the season. 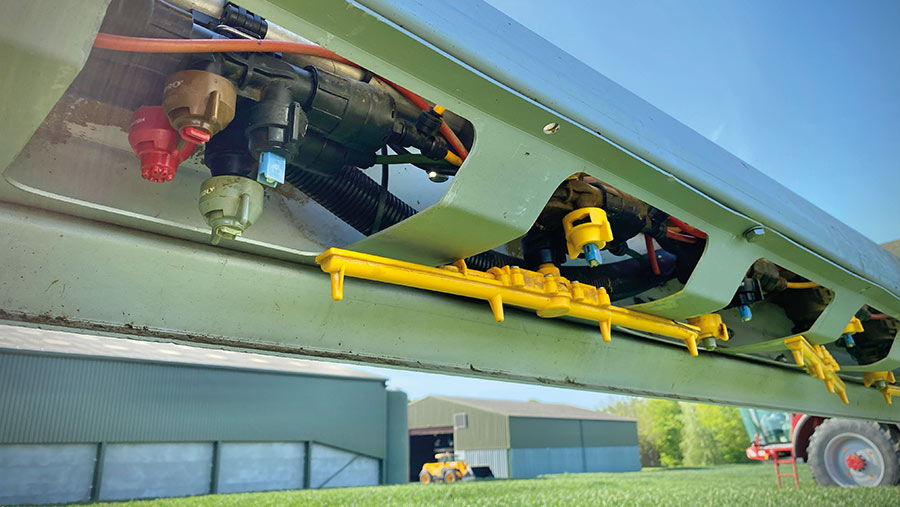 For pre-ems, I run at 25cm spacings with IDKT 03s fitted between the IDKs. It’s basically the same nozzle but with a twin outlet and, by combining the two, I can drop the boom height from 50cm to 35cm. This provides more flexibility in catchy conditions, which can often mean squeezing in a couple of hours more spraying on a less-than-ideal day.

It also gives a complete forward, backward and downward spray pattern, hitting the ground from all directions and, as a result, pre-ems have been far more effective. I always apply them at 200 litres/ha, so I can do 40ha on a single tank when field conditions allow. With the Chafer, I tended to run at 150 litres/ha because the tank capacity was so much lower.

On the other 50cm body is a Hypro 06 grey flat fan for late-season foliar nitrogen applications to boost proteins – typically at 200 litres/ha.

The second slot on the 25cm body is taken by Chafer dribble bars for liquid fertiliser, which we’ve found cause less scorch than normal Hypro fert caps. We don’t spread any granular fertiliser, so it’s a big part of the job.

The downside of the dribble bars is that they tend to drip for a couple of days after, so I’d quite like a built-in pressure washer on the next sprayer. The edges of a few of the panels are starting to look tatty, but I’m planning to sand and repaint them in the winter. 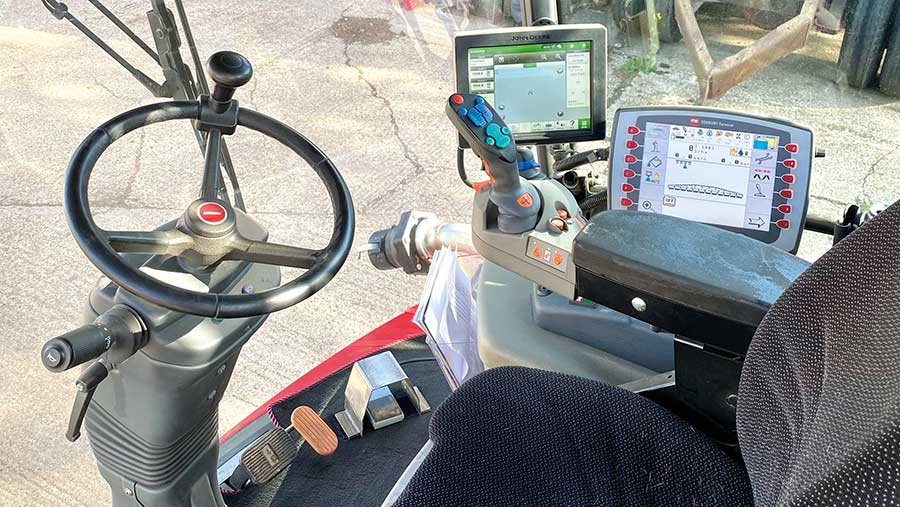 The one downside to having a big tank is the vast amount of chemical that needs chucking in for a T1 application. But, once it’s in, you know you can settle in the cab for a while.

I’ve got a 3in fast-fill port at the front of the cab for fertiliser, so it only takes about 10 minutes to load from our bowser, but all the water tanks are on 2in plumbing.

I haven’t used any mains water at the farm since we installed two second-hand fertiliser tanks that are topped up by the gutters of a new shed. Both hold 50cu m and it’s amazing how quickly they refill, so even in a dry year like this one, it should see me through the season.

We’re also looking at cutting down on waste plastic. The aim is to buy chemical such as chlormequat and glyphosate in IBCs, which I plan to tow behind the sprayer on a home-built trailer.

Once they’re empty, we should be able to send them back for refilling, so we’ll have fewer cans to process and might save some money on recycling.