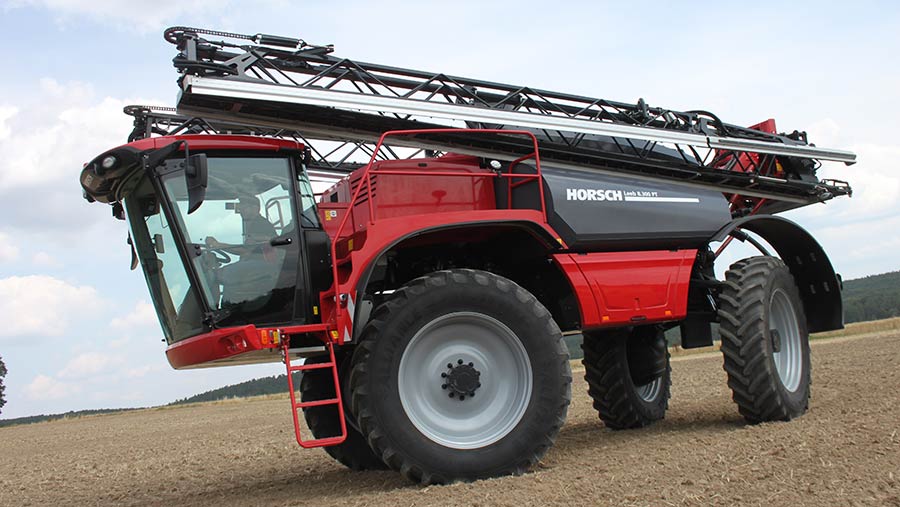 Horsch has improved its offering in the market for broad-boom, high-tank-capacity sprayers with the launch of new self-propelled machines and the promise of a big trailed model to be unveiled at Agritechnica in November.

Both are equipped with Horsch’s CCS Pro continuous inside cleaning system and automatic washing programme, and have a filling rate of up to 1,000 litres/min via a stainless steel rotary pump.

The two machines are built around Horsch’s ComfortDrive chassis concept, with a central frame and hydro-pneumatic suspension that individually regulates the movement of each wheel.

Drive to the wheels – which can now have tyres up to 2.15m diameter – is through a hydrostatic transmission that has been engineered to provide 30% more torque, while a slightly reconfigured layout is designed to improve weight distribution when full, empty or anywhere between. 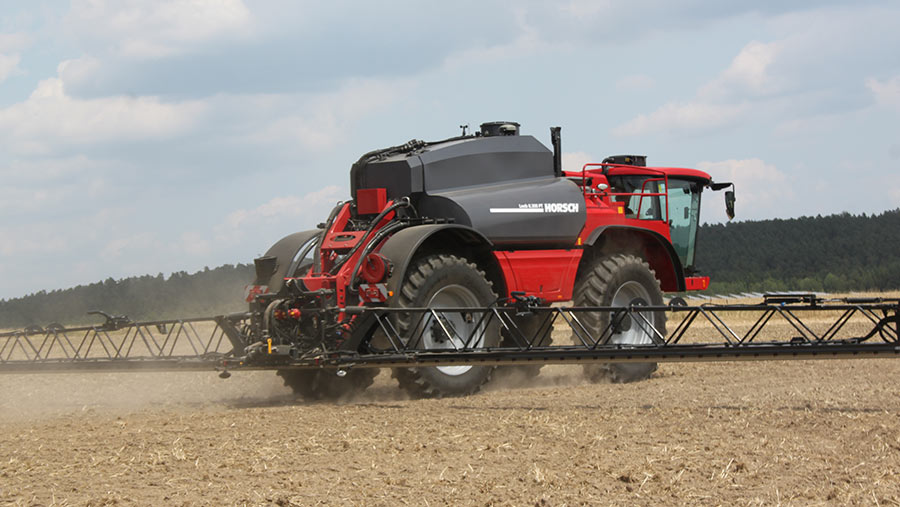 Both models have steel booms which can extend up to 42m

Horsch has stuck with a steel-only boom offering, suggesting its strength, rigidity and the ease with which it can be restructured and welded if damage does occur outweigh those of aluminium.

The company currently regards the carbon fibre alternative as too expensive for both manufacturer and  customer.

Boom widths now extend up to 42m and can be fitted with 42 individual sections. Cushioning remains the responsibility of the BoomControl suspension system, which can be upgraded to Pro Plus specification to allow each boom section to independently follow ground contours.

Although it won’t be publicly unveiled until Agritechnica in November, the company has released details of a 12,000-litre trailed sprayer to add to its existing 4,000- to 8,000-litre models.

While the UK market for machines of such size might appear limited, Horsch UK says 30% of the trailed models it has sold this year have replaced self-propelled machines.

This has largely been driven by users seeking better utilisation of their tractors, particularly as steering axle advancements have made it easier to quickly and accurately back trailed machines into field corners on headlands.

Fitted with a tandem axle, the Horsch Leeb 12 TD is said to be targeted at large units and those who spray at high application rates. Booms are the same steel units of up to 42m as found on the new Leeb 6.300 and 8.300 PT self-propelled machines.

Horsch recently extended the facilities at its Landau factory in Bavaria, Germany, where the Leeb sprayer side of the business has been based since 2008.

The sprayer sector continues to be a particular growth area for the company, says Theo Leeb, with a forecast 800 trailed and self-propelled sprayers to be built this year, impressively up from 360 in 2017.

After Germany, the UK is the company’s second-largest market by turnover.

While Horsch has offered both front- and mid-cabbed models in recent years, the latter tend to be sold mostly in eastern Europe where their additional ground clearance and variable track width are in demand.

With the new range, Horsch has switched fully to the front-cab format, which it says offers optimal weight distribution, and the new design provides up to 2m clearance and adjustable track width of 2.25-3m.

The cabin itself is a completely new Claas-sourced unit that replaces the former Krone cab. Internal features include a new ErgoControl armrest designed to simplify operation, while ventilation air is drawn into the cab through Category 4 filters approved for filtration of spray products.

Ground clearance
Up to 2m