Mounted sprayers appeal to a broad church, with pint-sized smallholder models at one end of the spectrum and colossal 4,000-litre front-and-rear combinations at the other.

There is also a sizeable middle ground, with a wide range of tank and boom options to suit almost any operation. However, with 24m tramlines fast becoming the standard for many mid-sized arable operations, most of the intermediate boom sizes have fallen out of favour.

This is largely down to the productivity gains the larger boom brings, as well as making it easier to employ the services of a contractor when required. Advances in boom folding and suspension systems also mean that a modern 24m mounted sprayer is pretty easy to live with.

Making the move to 24m can require a significant hike in investment. This is because some sprayer makers limit their simpler ranges to 18m or 21m booms, so jumping to 24m involves plumping for a more sophisticated model.

The good news is that a few brands do offer 24m spans on simpler units, and others start their premium ranges with a basic spec and let customers add features as they see fit. As a result, it is possible to get hold of a fully functioning 24m sprayer from a quality brand for less than £30,000, with some options coming in under £25,000.

Below, we’ve picked out seven such machines, with tank capacities from 900-2,200 litres. Tank size has a relatively small effect on price, so it’s often worth stretching to a larger model, even if it isn’t going to be filled that often.

Teaming any of the sprayers with a front tank can almost double capacity and these can generally be picked up for less than £8,000. There is also nothing wrong with using an older front tank with a new sprayer to save some cash. 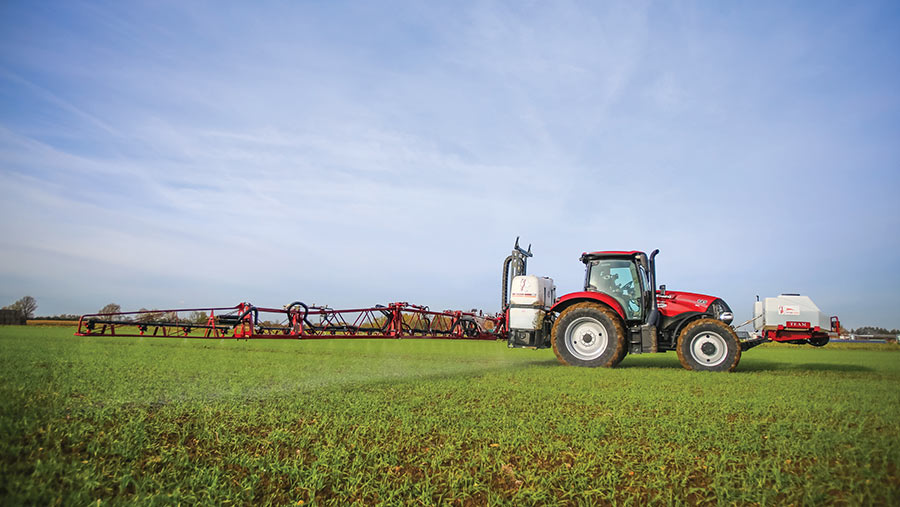 Team Sprayers are designed and built in Ely, Cambridgeshire, and the firm offers a range of mounted and trailed models, plus a few specialist machines for ground care and spud growers.

Its 24m mounted offering is the Arian 2, which comes in 1,200-, 1,600-, and 1,800-litre capacities. The tanks are rotationally moulded plastic, rather than the fibreglass that was used on models manufactured before 2018.

These machines are fitted with a two-stage control valve system  and a 60-litre induction hopper. There is also a 100-litre clean-water tank for rinsing and an additional 15 litres available for hand-washing.

Team Sprayers offers the Arian 2 with either traditional gullwing booms or rear vertical fold versions, the latter being the most popular.

These have a pendulum system, anti-yaw damping and adjustable geometry to keep them out of the crop on undulating terrain.

They are available in 20m, 21m and 24m, each of which is capable of working folded to half width. For transport, the 24m rear-fold variant tucks to 2.4m wide and 3.2m tall.

There are a number of front tank options ranging from 600-1,500 litres, with the two largest models coming in a low-profile format to give the operator a better forward view. These tanks have a 700-litre/min transfer pump, in-cab agitation adjustment and liquid transfer switching, and folding storage legs. 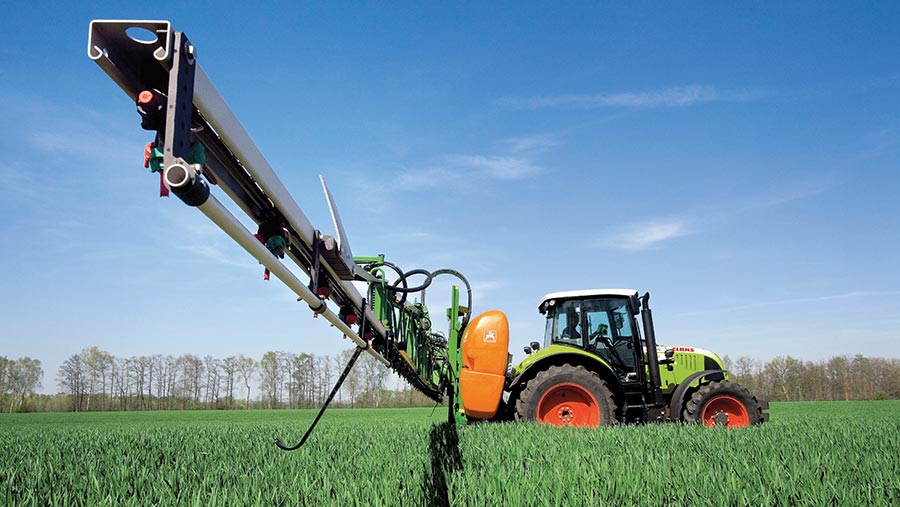 The UF 01 Fairline is Amazone’s no-frills mounted sprayer range. It is essentially the same as the previous UF 01-series, but the firm has jettisoned some of the high-end features that are now only available on the fancier UF 02 models.

Buyers have the choice of a 900- or 1,200-litre tank, but the small price difference between the two means many will opt for the larger version. Both tanks have a smooth internal profile, and the firm says the design minimises the number of areas where residues can collect.

Pump options are four or six-cylinder Comet units, with outputs from 160-210 litres/min, and there is an infinitely adjustable hydraulic agitation system that allows the operator to dial down the intensity to prevent foaming. A 55-litre induction bowl is standard fitment and it’s possible to specify a fast-fill port.

The entry-level boom is the Q-Plus horizontal-fold that maxes out at 15m, and the rear-fold Super S1 offers widths of up 21m. Only the top-spec Super S2 goes up to 24m, which is the largest size available on the Fairline. However, the same boom design runs up to 30m on the higher-spec UF 02 models.

All have a sprung suspension system with rubber dampers to prevent pitching and yawing. The shorter boom sections mean the Super S2 has a transport height of just 2.9m.

A simple Amaset+ controller comes as standard and this offers speed-related rate adjustment, up to seven sections and boom tilt control – providing an electro-hydraulic changeover valve is fitted.

There are several control system upgrades available, but high-end features such as individual nozzle control and automatic boom levelling are reserved for the UF 02. 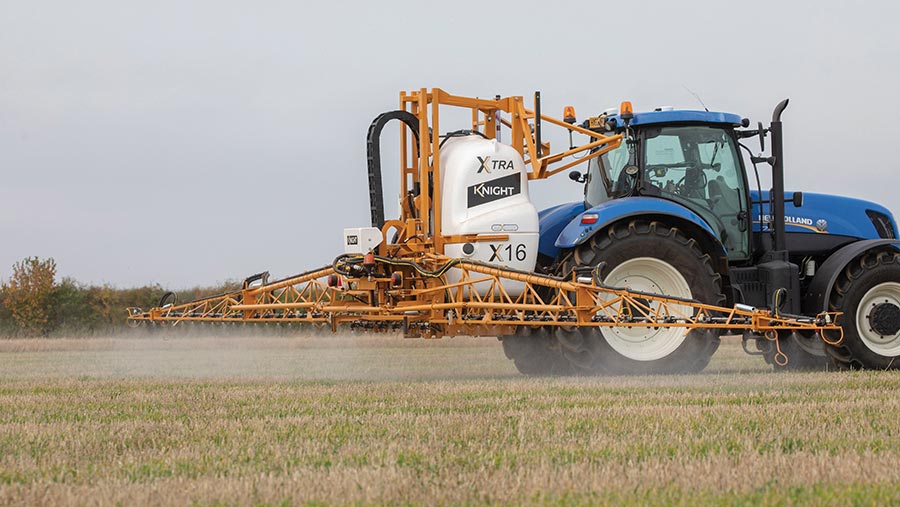 There is just one mounted machine in Knight’s sprayer line-up, which can either be purchased in a simple, low-spec setup or loaded with options.

All feature the firm’s low-volume Maximiser plumbing system, as well as pressurised spray line circulation with auto-cleaning function. A stainless-steel induction hopper is included as standard and buyers get to choose whether they have a diaphragm or centrifugal pump.

Gullwing 3-series booms are the cheaper option, and these come in 24m or 28m formats – both of which can operate at half width. They have a 3D suspension system with yaw damping and they can be specced with hydraulic boom incline and one-side folding.

Upping the budget brings in the option of the V-fold, rear vertical folding booms, which come in 24m, 28m and 30m working widths. These have hydraulic boom incline adjustment as standard, and below-level adjustment and one-side folding as an option.

Another upgrade is a contour-following centre boom assembly, which is designed to keep close to the crop on positive and negative inclines. It also has self-aligning suspension that has been set up to work with an automatic boom levelling system. 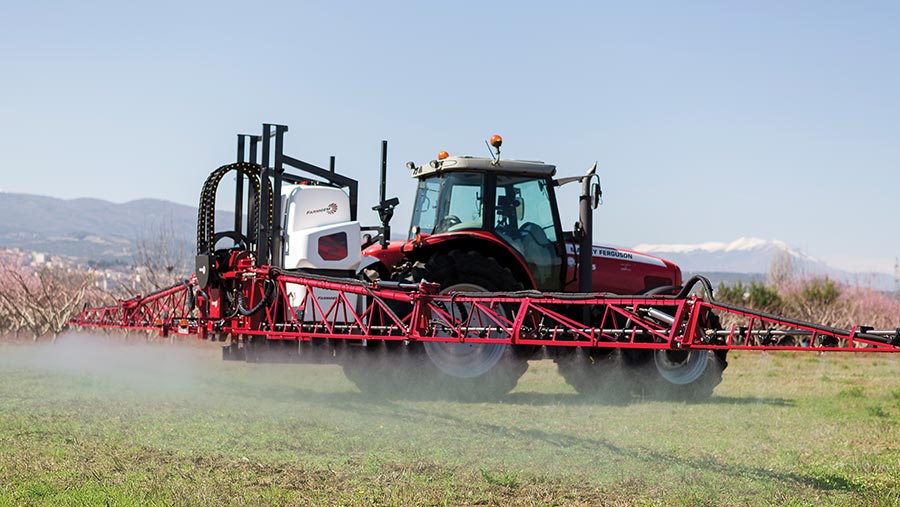 Shortly after being bought by Case-IH in the mid-1990s, the well-known Gem sprayer brand was mothballed.

In 2009, two of the firm’s former directors joined with Brian Knight of Knight Farm Machinery to resurrect the brand. Renaming it FarmGem, they outsourced production to Hungarian firm Farmgep.

Since January 2020, FarmGem sprayers have been imported by Lincolnshire firm S&K Sprayer Services, which sells them in both S&K and FarmGem livery, depending what the customer prefers.

Its 24m mounted offering comes in the form of the Protector, which has a 1,600-litre rotationally moulded polyethylene tank, a 160-litre clean water tank and rotary rinsing nozzle. There is also a separate hand-wash tank and locker for personal protective equipment.

Pressure is provided by a six-cylinder, 260-litres/min Bertolini pump and the machine has an automatic recirculation prime-and-purge system.

The boom also has tilt correction and boom lock as standard, and there is the option of adding variable geometry and outer boom folding.

In the cab, operators get an Arag Delta 80 spray terminal and an electronic joystick controller that handles all spraying functions. This setup comes with seven-section control as standard and automatic rate adjustment. Extras include GPS section control, auto boom levelling and additional spray sections – up to a maximum of nine. 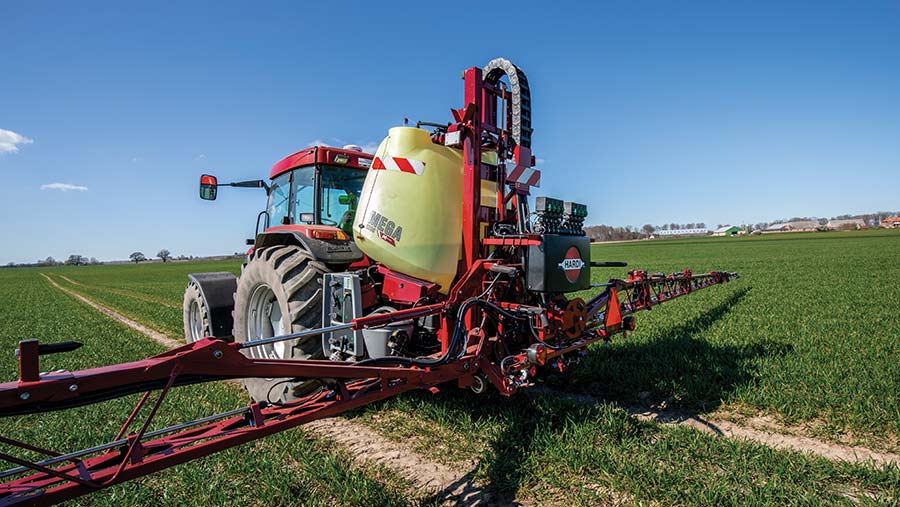 Hardi is an established name in the mounted sprayer market with a broad selection of models spanning most size categories.

The Mega is the firm’s biggest mounted sprayer, with tank sizes from 1,200-2,200 litres and booms from 15-28m. There is also a 170-litre rinsing tank and a separate 20-litre reservoir for hand-washing.

The pump is Hardi’s own 464 six-cylinder dry sump unit, which has an output of 250-300 litres/min. Agitation is provided by Venturi nozzles, which are designed to avoid the tank having any unwashed blind spots.

Hardi stopped offering gullwing booms on mounted sprayers in 2003, so all models up to 28m feature a rear vertical folding unit. Smaller models up to 18m use the firm’s Pro boom range and those running from 20-28m use the VPZ booms, which have a lattice structure for additional strength and yaw dampers on the wings.

The whole sprayer has lower-linkage-mounted airbag suspension to give a smooth ride and the boom is protected by a hydraulic damper when it’s in the transport position. Boom levelling is an option, but the firm says it’s rarely specified on 24m machines.

As for controls, buyers looking to keep costs down can choose between the basic HC7500 – built by Muller – or, if they have a tractor with a screen that’s fully Isobus-ready, the harnesses and software are included to connect to this.

They also have the choice of connecting to a tractor speed sensor, independent radar or patch sensor GPS. Several controller upgrades are available, including GPS auto-section control.

The firm offers 1,200- or 1,500-litre front tank options, which can be used as water-only nurse tanks or chemical tanks with in-cab transfer switching. 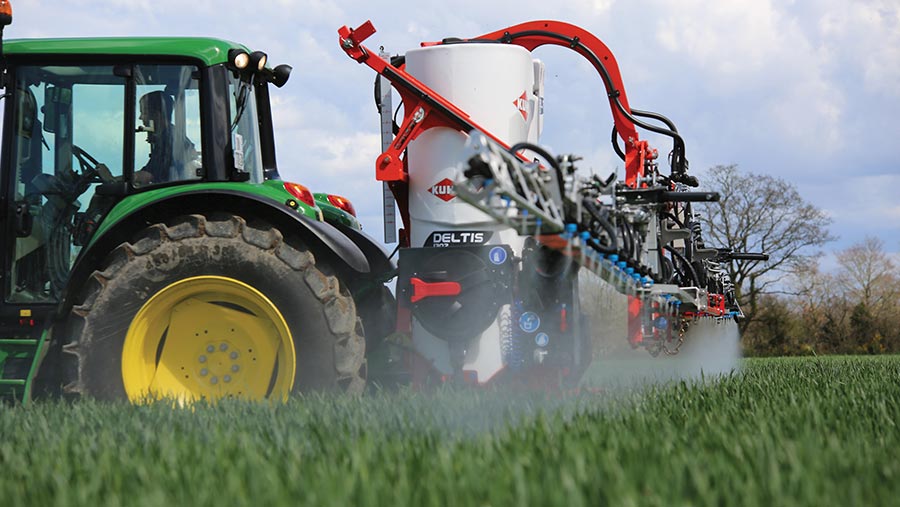 The plastic tanks sit on a light L-shaped frame, which is designed to keep the weight as close to the tractor as possible. Rinsing capacity is 170 litres and there is a 42-litre, foot-operated induction hopper.

Booms can be specced in either steel or aluminium and both options range from 15-24m. They also feature Kuhn’s so-called Optilift suspension system, which works on a parallel linkage with nitrogen-filled accumulators taking charge of the damping. The firm says this gives the booms vertical stability during spraying and float during road transportation.

Two control systems are on offer, starting with the manually operated Manuset system, which uses two valves, or the electronically controlled Diluset+, which allows operators to control the sprayer’s main spraying and flushing functions from the cab.

A continuous circulation system is also available to give more efficient boom priming.

The simple Reb 3 spray controller offers forward speed-related rate adjustment as standard and this can be upgraded to GPS section control. There is also the option of a more sophisticated terminal with 7in colour touchscreen.

PF front tanks are available in 1,000-litre or 1,500-litre capacities and these come with a 22-litre/min electric pump as standard and the option to upgrade to a 75- or 125-litre/min hydraulic version.

Vicon’s mounted sprayer line-up is split into two ranges, with the smaller, simpler iXter A topping out at 1,200 litres and 21m, and the more sophisticated iXter Bs running up to 1,800 litres, with booms as wide as 30m.

In total, the iXter B has four tank options, with 1,000-, 1,300- and 1,600-litre capacities also on the price list. All of these come with a 180-litre clean water tank, internal tank-rinsing nozzle, a six-cylinder Altek pump and a turbo agitation system. Added to that, there is an 18-litre hand-wash tank with integrated soap dispenser.

Rear, vertical-folding HC steel booms come in either 24m, 27m, 28m or 30m working widths and all have suspension with float and anti-yaw systems. Half-width folding is also available, and they come with full width and independent left or right slope correction. Spray lines are stainless steel with triple-nozzle bodies included.

In standard spec, the iXter B sprayers are offered with Isobus controls, so they can plug straight into a compatible tractor or terminal. Additional in-house terminal options include the IsoMatch Tellus Go and Pro models. A version with the non-Isobus Flowmate controller is available, too.

A 1,100-litre front tank can be added to the outfit, which works in tandem with the sprayer so it doesn’t require its own pump.

IXter sprayers are now available in Kverneland branding and they have the same model names and specifications.