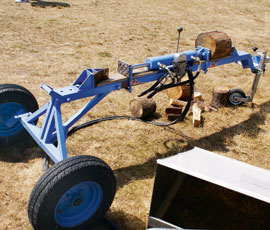 An extraordinary platform that enables a van or pick-up to be transported on top of a large capacity Bredal trailed fertiliser spreader took one of the top awards in this year’s competition.

The idea was developed by Garrow Shand to allow the spreader operator to carry his own transport for travelling home while doing contract work. The alternative would be to send someone to collect the driver or to tow the van, but the combined length of a slow moving tractor, spreader and towed van can be awkward to manage and cause overtaking problems for other road users, Mr Shand explained.

To prepare the van for loading, it is parked on a special steel platform that was made up in the workshop at Castle Farm, Sutton Hoo, Suffolk. The tractor that operates the spreader has a front-end loader, and this picks up the platform and van, placing them on top of the spreader ready for transport. The platform is unloaded again when the spreader arrives at its destination and is ready to start spreading.

The van transporter won the top award in what the organisers call the Gadgets section of the competition, where this year’s runner up was a parking stand for a post hole borer. Michael Buckmaster of Lower Farm, Brettenham, Ipswich, designed the stand to provide safe and secure storage for the borer, while also making it easy to attach or remove from the tractor link arms.

An accumulator that turns round bales through almost 90° before dropping them in pairs won the New Equipment category for the Hayward family who farm at Ashmoor Hall, Campsea Ash, Suffolk. The accumulator, which was designed mainly for straw bales, is towed behind the baler and when the second bale arrives the operator presses a push-button while the baler tailgate is still closing.

This starts an automatic sequence of hydraulically controlled operations, starting with swivelling the bale carrying section through 80°, the accumulator tailgate opens and part of the accumulator floor is raised to discharge the load. The bales are collected by a Ritchie Traileyre self-loading transporter which is modified to carry 20 bales, and the fact that the bales are swivelled through 80° before being dropped means they are facing the right way for the Traileyre to avoid driving over the tramlines.

The runner-up award in this section went to Brian Davey of Sutton Hoo for his double-ended log splitter. It is powered by a 5.5hp JCB Beaver petrol engine and the unusual feature is the two-way hydraulic ram with a splitting head at each end. This means either one person can work alone using just one of the splitting heads, or for more output a two-man team can work with one each end.

The third category in the competition is for modifications to existing equipment and the winner was Kenneth Hutchinson for his modified digger bucket. Mr Hutchinson’s contracting business at Wickhambrook, Newmarket includes up to five miles of hedge coppicing, much of it where there is a ditch beside the hedge. Designing extra long teeth to fit on the bucket makes it easy to clear the cut material from ditches.

“We wanted to speed up the job and also avoid hand work as far as possible,” said Mr Hutchinson. “We used a bucket from an old Case loader, and it works very well. The long tines also make it easier to separate out the larger pieces that can be saved for firewood.”