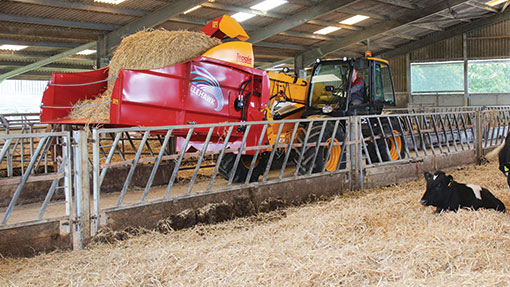 The Truro-based manufacturer has sold 15,000 Tomahawks to date and has made use of plenty of its proven components to build the Telehawk. The new machine differs from rival products from the likes of Spread-a-bale and Warthog by using a forager-style chute to fire the straw more accurately into the shed, and should also be more manoeuvrable than the traditional, tractor-mounted Tomahawk.

The machine can eat big square bales up to 1.2m x 1.4m in size and round bales – loaded one at a time – with a diameter of up to 1.5m. Depending on the density of the bale, the Telehawk’s beater can pull a Quadrant wheat bale apart in just under two-and-a-half minutes.

Bales can be scooped up using a stack or wall to push against and the moving bed chain will then pull the material towards the 320mm-diameter beater. It spins at a steady speed and uses hook-shaped Tungsten points to tease the bale apart, breaking up any densely packed lumps in the process.

This bruising effect improves the absorption qualities of the straw and should also form a better bed on the shed floor.

Spreading straw that has been bashed about, rather than chopped, can reduce material requirements by up to 30%, according to Teagle. In turn, encouraging dairy cows to lie down for an extra 90min each day by creating a more comfortable bed has the potential to increase milk yields by a litre/day, the company says.

The loose straw is blown up the chute by a 1.6m-diameter fan. It spins at 400-600rpm and has priority in the hydraulic circuit, which should reduce the likelihood of any block-ups.

There is also an adjustable pressure-sensing system to keep an eye on the load being put on to the cross-beater. If the beater tries to push too much straw towards the fan then the chain feed will automatically stop and reverse to prevent clogging up.

The fan can fire material across 13.5m in a 280deg arc. Control of the chute, deflector and bed speed is done via a wireless Bluetooth link to the control box – a system that Teagle expects to roll out on to its other machines in the future.

The empty Telehawk weighs in at 1,350kg, but Teagle recommends a minimum lift capacity of 2,600kg to cope with the strains of carrying a 400kg bale on the bed.

The headache for the designers came in finding enough power from a loader’s hydraulic system to pull apart a densely-packed bale. An oil flow of 60 litres/min at 160bar should produce the equivalent of 25-30hp in hydraulic flow – enough to cope with most straw bales, but pretty low compared with pto-powered alternatives.

Attachment brackets are connected to the bedder by U-bolts and will fit most mainstream headstock designs including JCB, Manitou and Matbro.

The asking price is £15,985, which puts it a little above the competition, but none of those can offer the chute design and accurate spreading of the Telehawk, according to Teagle.

Teagle is one of the UK’s biggest exporters of agricultural machinery. So far in 2014 the company has shipped equipment out to 35 different countries and exports account for 50% of sales.

It has established a strong distribution network across the USA, as well as Bolivia, Japan, South Africa, Australia and New Zealand.

The Telehawk is expected to continue the demand from abroad, with France and Germany particularly fond of telehandler-mounted bedding equipment.