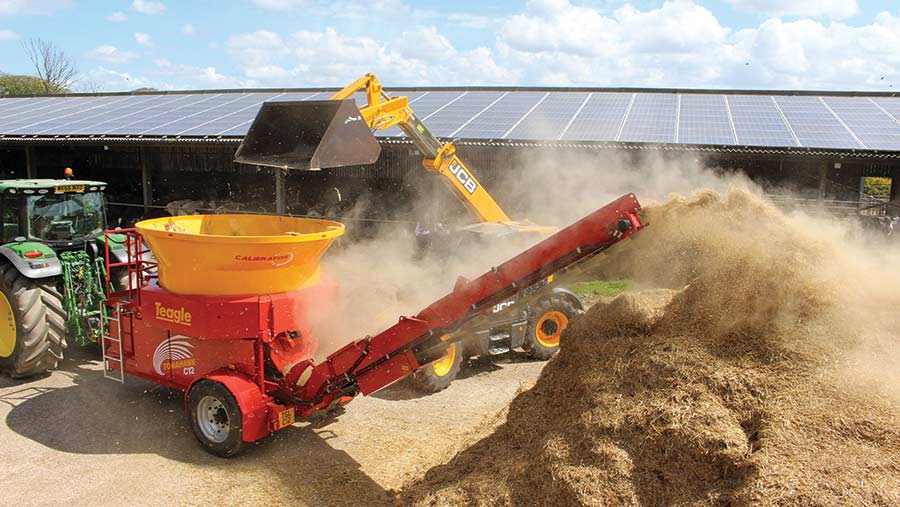 Cornish manufacturer Teagle has established itself as a strong player in the straw processing market, having first introduced its Tomahawk range 32 years ago. The newest member of the 17-model line-up is the C12, which is aimed at massive 1,000-cow dairy units and large-scale straw-processing contractors.

At present, Tomahawks make up 60% of Teagle’s sales and primarily find homes feeding dairy and beef cattle, spreading loose housing for livestock and processing straw as a biofuel.

The family-run firm has invested heavily in the new machine, which it claims is the most sophisticated project it has ever undertaken.

Dairy farmers require different lengths of straw for their cattle, but Teagle says many of the current machines on the market leave excess long material, which cows waste as they go in search of shorter, easy-to-digest grub.

The brief given to the in-house design team three years ago was for a top-loaded machine that could process both round and square bales with simple chop length control.

It also needed to be suitable for a 120hp tractor and able to slot into a shipping container for easy export. The end result is a larger unit than most UK bale processors.

The C12’s set-up is done from the cab with the hydraulic folding conveyor taking 10 seconds to slot into place.

Once the machine is running on the 1,000-speed pto, the straw is top-loaded into the spinning lozenge-shaped chamber, which can comfortably gulp a whole round bale or most of a large Hesston in a matter of minutes.

The giant 2,000rpm spinning rotor is centrally mounted at the base of the bale chamber and houses 56 hardened rectangular steel hammers with tungsten carbide faces, giving four wearing edges from one reversible hammer.

The chop length of the straw is determined by the two screens that form a semi-circle around the bottom half of the rotor with a 10mm gap to the whirling hammers. As the straw is drawn through by the rotor it is forced against the screens, giving it little hope of passing through without being crushed.

The screens are a simple design with evenly sized holes in rows across the full width. There are six screens to choose from, ranging in size from 2cm to 10cm. Two come as standard, but they can be reversed to make them last a bit longer. 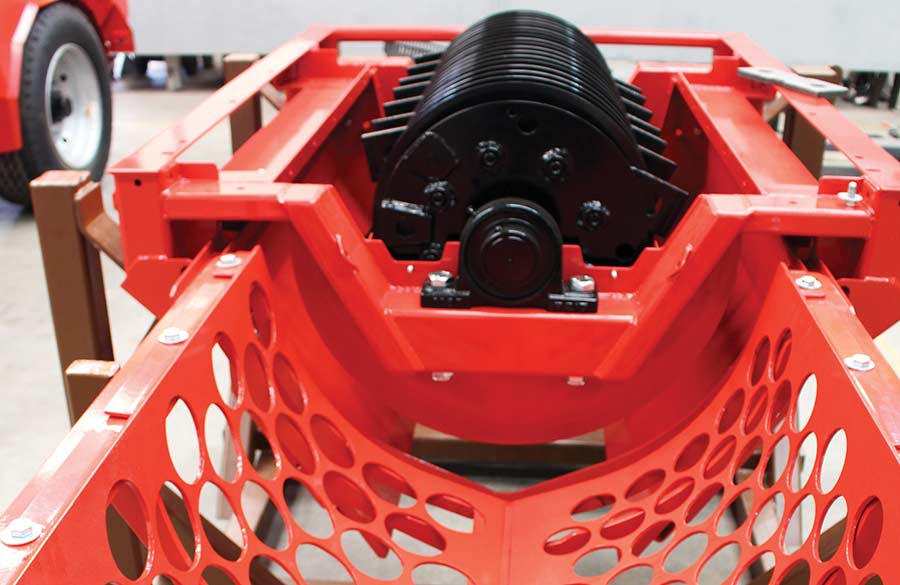 When the straw hits one of the holes it is chopped in half, sending the smaller material on to a belt conveyor that shifts it from under the bale chamber into a pile up to 4.2m high.

Teagle says the first screen will do the bulk of the chopping, with much of the material then falling through a slightly larger diameter second screen. When two identica-sized screens are used, there is a risk of over-chopping the straw, which reduces quality.

The C12 is controlled via a Bluetooth unit with a 50m range. It can stop, pause or reverse the bale chamber rotation, as well as tweaking the power loading speed.

Quoted outputs appear impressive at up to 25 dry quadrant bales per hour, although anything above 20% moisture content will slow the processor down and reduce quality, the company says.

A tractor of at least 120hp is compulsory but during our visit a 215hp machine was hooked up and found it tough going when winding through some larger lumps. Teagle says more power at the front equates to more output at the rear.

The company expects lots of demand to come from Germany and France. With that in mind, the machine complies with new type approval laws, including brakes, tyres, axles and hitches that will be accepted across the water.