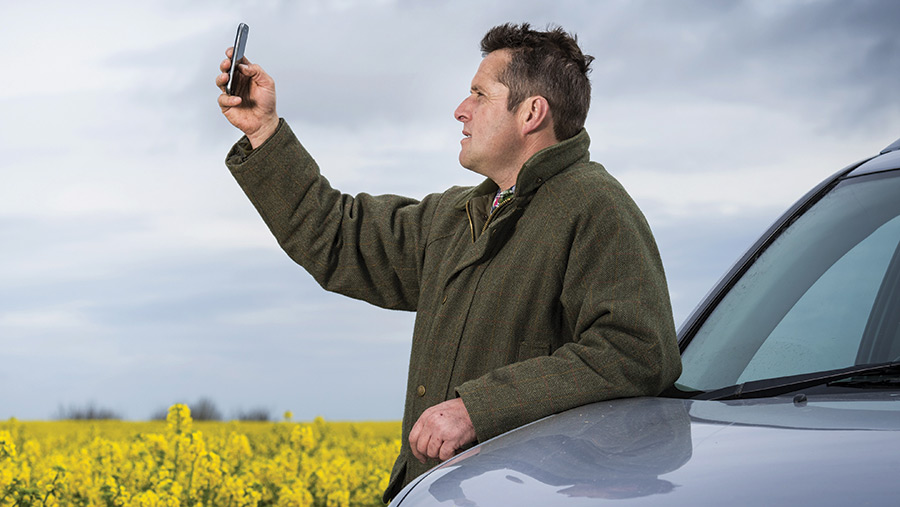 Smartphone apps are an established tool for arable farmers, and the latest batch range from one offering potato blight forecasts through to one that controls drones.

Here are seven of the latest additions.

The Crop4sight app will allow potato growers to accurately predict how environmental factors will affect crop output throughout the growing season.

The app will calculate yield potential and absorbed radiation.

When combined with varietal traits and the commercial purpose of the crop, these factors will allow growers and agronomists to adjust output expectations and optimise burn-off timings for maximum marketable yield.

Processors and packers such as Greenvale will also be able to monitor the likely supply volumes of specific varieties within their portfolio.

The app will also speed up the yield dig sampling process, while reducing the labour requirement and improving data accuracy, by connecting with Bluetooth-enabled scales.

These will weigh and record the weight of each tuber, while also identifying tubers suitable for taking away for dry matter tests, at the dig location. 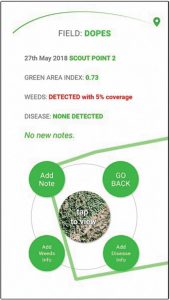 British startup firm Drone AG has developed the app to work with several off-the-shelf DJI drones available for about £500, but currently is only available for Apple iPhone 6 or newer.

The drone will set off on a scouting mission after details about specific fields and points of interest are entered on the smartphone.

The drone is capable of covering 2ha/min at a rate of two picture stops per hectare.

High-resolution pictures are downloaded to the user’s smartphone as the drone flies.

Algorithms are able to detect nutrient-deficient leaves, calculate green area indexes across different patches of the field and work out crop growth stages. 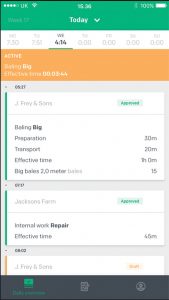 The app has been developed in collaboration with a group of Danish farmers and contractors.

It is designed to take advantage of the already high digitalisation in farming and contracting. 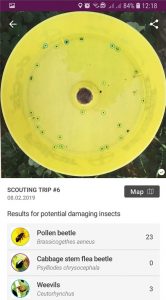 The new Scouting app from BASF, launched under the Xarvio brand, offers growers a range of tools, including:

The weed identification tool covers broad-leaved weeds and has 117 plants in its database currently, but aims to have 800 worldwide in the future, including grassweeds.

To use the tool, users upload a picture of the weed to the cloud, where artificial intelligence will analyse the picture and give an automated answer within seconds, along with a percentage certainty.

As more pictures are uploaded, the accuracy of the software will continually learn and improve.

The yellow trap analysis can be used to identify and count captured insects within yellow traps (not sticky traps), again through uploaded images.

The disease diagnosis function identifies cereal diseases such as septoria and rusts. 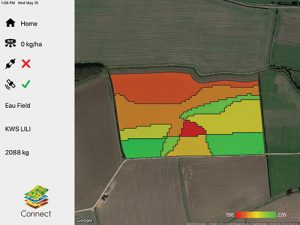 A new app for users of agronomy company Hutchinsons’ Omnia platform will allow the streamlined transfer of prescription maps to farm machinery to enable variable-rate applications.

The Connect app accesses the variable-rate map data created in the Omnia cloud-based platform and transfers them via wi-fi and a small communications module connected to the implement controller.

This wireless connection will remove the need to download maps to a memory stick to be manually transferred.

By connecting straight into the machine’s controller, the app allows growers to use the existing variable-rate capabilities of their fertiliser spreaders, drills and sprayers without the need to unlock or update the controller, which can be an expensive option.

The app is primarily aimed at small- to medium-scale growers who have not yet invested in autosteer technology as the app relies on the iPad’s own built-in GPS system.

The Connect app is compatible with machine controllers from Amazone, Horsch, KRM Bogballe, Kuhn, Mzuri, RDS Technology, Sky and Väderstad, among others. 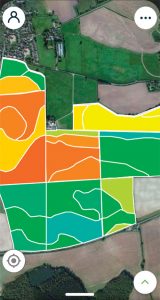 The basic package allows users to record information and pictures of interest, such as poor crop growth, weed patches and disease using the app and GPS.

This allows growers and their agronomist to target their crop management plans throughout the season and record the information to compare against field performance at a later date.

For an enhanced service, users can opt to add in optical satellite imagery to give a regular health report of the crop.

The app uses the European Space Agency’s Sentinel satellite for all-weather synthetic aperture radar (SAR) monitoring to give a resolution nine times higher than that of other providers.

Users can also access soil mapping and variable-rate management tools to help them get the most from precision farming. 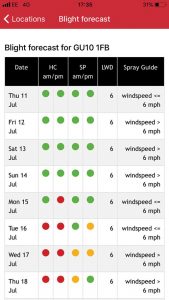 Crop protection supplier UPL has designed an app that displays Hutton Criteria and Smith Period data, alongside data on leaf wetness and spray conditions, with push notifications sharing real-time information with the user.

Users can source a blight spray forecast by using a postcode, where fields surround a farm, or when fields are more spread out, pins can be dropped on a satellite map to mark and save multiple locations.