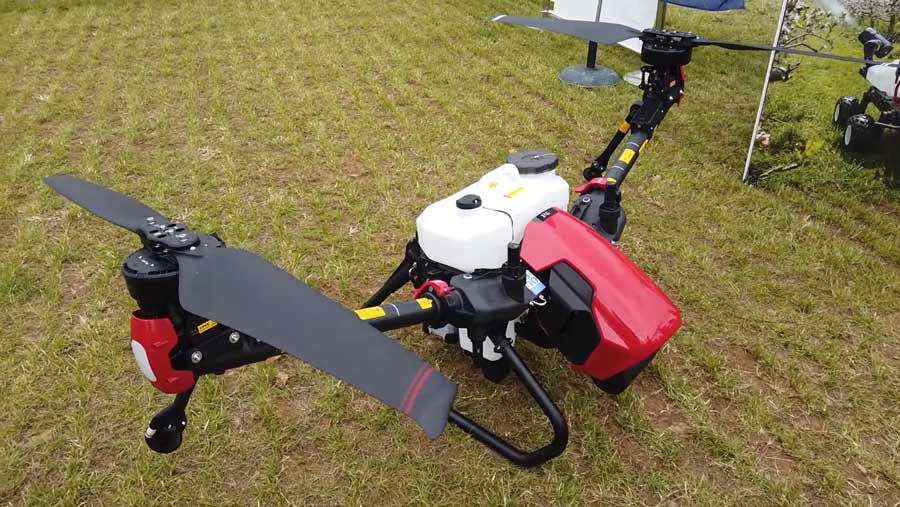 A new generation drone, designed to improve spraying performance with its twin rotors and smaller, more robust design, aims to transform how farm inputs are applied.

The V40 drone, developed by Harper Adams University, Chinese drone company XAG and drone specialist Auto Spray Systems, and the only one of its kind outside China, was on display at Cereals 2021.

Rob Pearson, chief executive officer of Auto Spray Systems, says the key innovation in the new drone, is its double rotor design and two spray nozzles which greatly improves the precision and accuracy of applications.

“Airflow below the drone is 50% less turbulent than on older designs with four rotors, which significantly improves spray penetration,” he says.

What’s more, the size and volume of the drone has been reduced by two-thirds, making it lighter and more portable, with a foldable wing for easy vehicle transport.

Fitted with an integrated camera, the drone also uses artificial intelligence to to scan and identify weeds..

Jonathan Gill, mechatronics researcher at Harper Adams University says that drones with greater precision have the potential to change the face of farming.

“The V40 drone was designed from the ground up, and with a 16-litre tank it allows for target spraying areas and eliminates soil compaction risks not just for use as sprayer but with the ability to apply seed or granular pellets,” he adds.

Legislation presently prohibits the use of spray applications by drones, but Mr GIll hopes they will get the go-ahead to be used on commercial farms within the next 18 months.