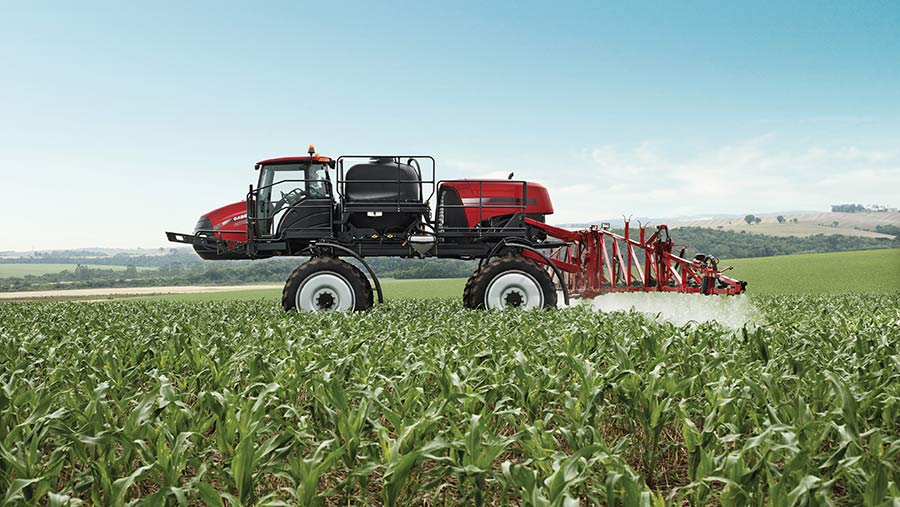 There is no shaking the feeling of impending doom surrounding the future availability of many herbicide active ingredients, but that needn’t mean booming weed populations, dwindling yields and slumping profits.

The loss of key actives, compounded by weed resistance problems in those that remain, has encouraged a clutch of technology companies to develop precision spraying systems.

These can identify and target individual weeds in growing grass and arable crops (“green-on-green” in industry parlance), saving the expense of costly fence-to-fence contact herbicide applications.

Most are currently available on a very limited basis as their makers increase the intensity of field-scale trials.

However, one prominent manufacturer, Bilberry, has its Greenview system installed on a Dammann sprayer owned by Dyson Farming in Lincolnshire, and is currently trialling green-on-green broad-leaf weed algorithms in cereals.

Rival firm Greeneye is prioritising the North American and Australian markets, where there are resistance problems on a “massive scale”, according to Nadav Bocher, its CEO and co-founder.

But tightening regulations – particularly around glyphosate – mean the systems will be in Europe in the next couple of years, he says.

His company is currently putting the finishing touches to its Selective Spraying System, which has been trialled extensively in wide-row crops such as maize.

The results suggest pre- and post-emergence contact herbicide use can be slashed by 78.5% compared with broadcast applications – estimated to be worth $28/acre (£49/ha) for US farmers.

However, UK growers should be prepared to accept slightly more modest savings given their greater weed burden and the stiffer challenge of identifying grass species in narrower-rowed cereal crops.

Herbicide reductions in these conditions are reckoned to be between 40% and 70%.

That would still make a significant difference to the long-term profits of farms hardest hit by resistance problems, where some growers are spending up to £150/ha on an annual herbicide regime.

Resistance – a growing problem in the UK

The cycle of some, such as blackgrass, can be upset through cultural changes – later drilling dates, rejigged rotations and the like. However, those with a long-lived seed bank and extended germination period are considerably harder to get rid of.

As a result, herbicide costs on farms with the most prevalent resistance problems are spiralling and, at the extreme end, growers are spending up to £150/ha.

Research conducted in 2015 showed a £65/ha herbicide spend in winter wheat climbed to £134/ha once major resistance problems were established.

The potentially drastic reduction in volume as a result of targeted applications also opens the door to more effective, premium ingredients that aren’t currently viable on a broadcast basis.

And the technology could help with pesticide re-registrations, where an active facing the chop could be saved by stipulating its use only through a spot-spraying system.

Though this is only speculative, the government’s national action plan for pesticides states that application technology will be a factor in the regulatory process, and it is funding research into the subject.

To keep prices down, Greeneye chooses to pair off-the-shelf cameras, processors and monitors with its own weed identification software.

It means the complete assembly can be retrofitted to any modern sprayer with pulse-width modulation (electrically actuated nozzles to control pressure and flow).

Central to this process is the fitment of a dual-line spray pack, which involves dividing the main liquid tank – typically 75/25% – to feed a second pump, spray line and set of nozzles. 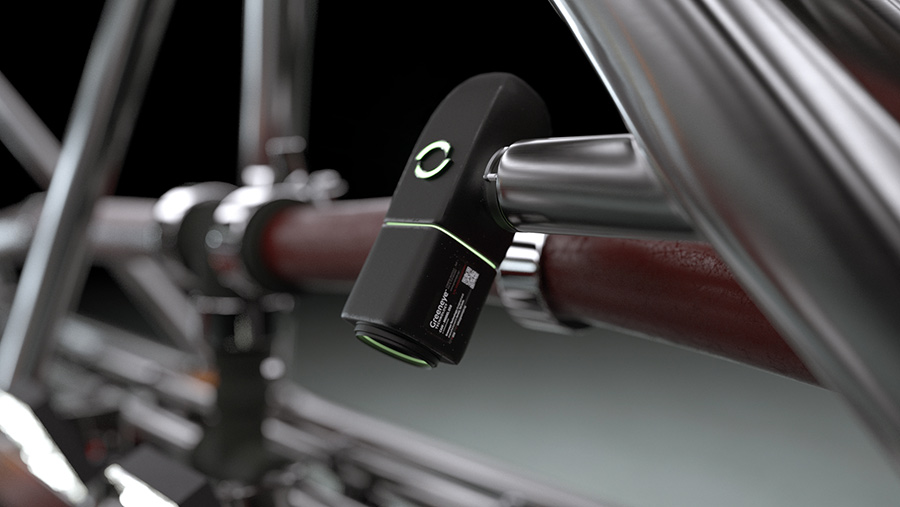 Cameras are mounted at 1.5m intervals along the boom to provide crop images for immediate analysis © Greeneye

“This configuration means the sprayer retains a big main tank, but gains more flexibility. Growers can apply two different chemical mixes in one pass – one tank for residual (broadcast) and one contact (precision), or one for broad-leaf and one for grassweeds.”

“From our research, the ability to apply residual herbicides – something many growers, particularly those struggling with resistance problems, are unwilling to drop – and contact in one pass is particularly attractive.”

For operators, the challenge will lie in calculating the quantity of contact herbicide required on a targeted basis – especially those working on smaller farms.

The second major part of the retrofit involves mounting standard RGB (red, green, blue) cameras at 1.5m intervals along the boom. These monitor the field in 25cm blocks and are capable of detecting single plants 20mm in size at speeds of up to 22kph – day or night.

The high-resolution images they capture are analysed in a split second and plants are classified down to species level. Detection of a target weed immediately activates the nozzle to administer a dose of herbicide.

This requires sophisticated software and heavy computing power, so Greeneye fits a series of processing units – by far the most expensive component – to work with the cameras.

“Trials showed the system achieved 96.8% accuracy in green-on-brown scenarios and 94.6% for green-on-green at commercial travel speeds (20kph-plus) in maize, demonstrating that both the application system and algorithms work,” says Mr Bocher.

Application information is fed through Greeneye’s own in-cab monitor and can be downloaded for further analysis after spraying.

Greeneye is remaining tight-lipped on the exact figures – except to say that its 36m system “will be the cheapest on the market for both green-on-brown and green-on-green applications”.

It intends to offer two purchase options. Buyers with more financial firepower will be able to make a single up-front payment to cover all the hardware and dual-line sprayer modification, plus access to species-level weed mapping analysis. Bolt-on extras will include disease detection software.

Alternatively, an annual subscription model will involve a modest installation cost, followed by annual fees based on the farm size.

In both instances, farms will have to purchase their own sprayer, but Greeneye estimates a return on investment of between six and 18 months.

When will it be available?

Europe is expected to be a big market – primarily because of the rapid tightening of regulations compared with the rest of the world. However, Greeneye intends to kick things off in its home market of Israel this year, where it will be running the kit on a 36m Case Patriot self-propelled sprayer.

It is also enrolling US farmers for trials in 2022 and is currently heavily oversubscribed, such is the demand for an effective response to herbicide resistance.

European trials are expected to start in 2023.

There are a handful of spot-spraying systems at different stages of development.

Bilberry A French company offering a similar camera system to that of Greeneye. It is working with Agrifac, Dammann and Berthoud.

Xarvio Partnered with Bosch, BASF and Amazone, and is primarily focused on the South American market.

Cambridge Consultants and Taylor Technologies Two British companies that have developed lower-cost systems – both are currently looking for commercial partners.

Weed It and Weedseeker The two established spot-spraying names use infrared cameras to detect weeds on stubbles. Not designed for green-on-green applications.

You can read more about their progress.

Support from the chemical companies

In an unusual twist of fate, these herbicide-saving systems also have the support of major chemical companies. The two “Rs” – regulation and resistance – mean huge-volume herbicide sales are not sustainable in the long term, so manufacturers have no choice but to embrace the move to spot-spraying.

Two of the big players serve as examples, with Greeneye buoyed by a multimillion-pound investment from Syngenta and BASF plunging cash into a development project involving Xarvio and Bosch.