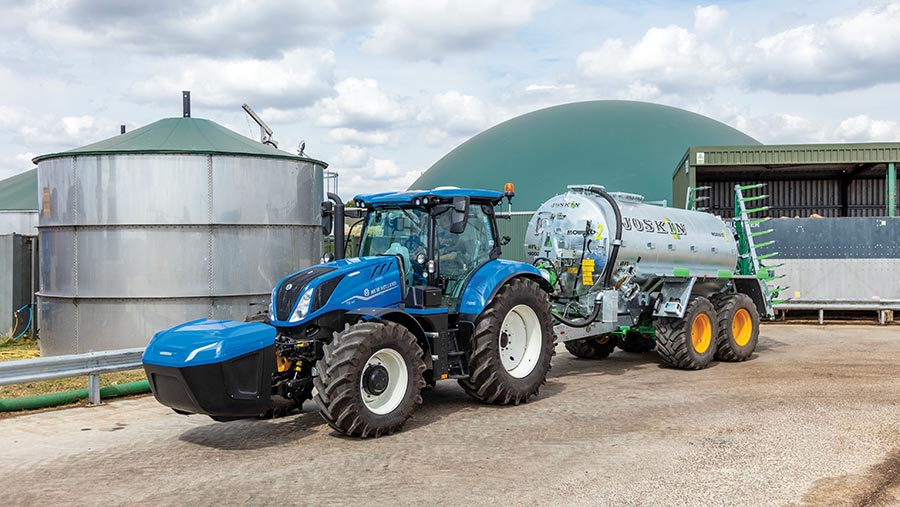 The jury is still out on the future of fuels, but natural gas in compressed, liquified or renewable form is making a strong case to replace smutty, petroleum-based power sources.

The first engine powered by a compressed gas was produced in 1928 and fuelled with liquid petroleum gas (LPG) – a blend of propane and butane at 5-7 bar.

Compressed natural gas (CNG) is the same as the methane gas we use for household heating, typically sourced from deposits underneath the earth’s surface via pumping, fracking and pressure extraction.

This means LNG-powered vehicles would have a range 3.5 times greater than CNG on the same tank size.

Gas with about 50-60% methane is then refined to 98% and injected into the gas grid or compressed to 200 bar pressure and used to fuel compatible vehicles.

Biomethane is seen as a potential game changer in agriculture, as farms with, or in close proximity to, an AD plant can use it to fuel their machinery fleet, significantly reducing greenhouse gas emissions and potentially trimming costs.

Is there a market for biomethane fuel in UK agriculture?

Climate change and greenhouse gas emissions are never far away from the mainstream news feeds, and this increased focus is leading experts to predict an accelerating uptake of RNG fuel in many applications.

There are plenty of vehicles already powered by natural gas, but so far these are exclusively in road categories such as lorries and buses.

A report published by CNG Services, a gas industry consultancy, design and build specialist, looked into its place in agriculture in Britain, assessing areas such as market size, market potential, costs and emissions.

Delivery options for biomethane were considered, with three potential avenues (see table, below) enabling the authors to estimate how many farms and tractors could viably use biomethane generated by existing biogas producers.

There are currently 579 operational plants in the UK, with 88 producing biomethane that is injected directly into the gas grid. There are also a further 331 AD plants under development.

It showed that about 100 farms with 250 tractors could use existing type 1 sites, with the majority based around installations in the Northampton and Warrington areas.

For type 2, a total of 3,600 farms and 12,000 tractors could use grid injection points, largely across the south-west and east of England.

Finally, about 40 farms with 400 tractors could benefit from trucked biomethane, with these confined to East Anglia and Lincolnshire.

It concluded that for biomethane-powered tractors to take off, developing type 2 sites where machines can refuel at a local AD plant should be the initial focus, as it is the largest market size.

However, feedback suggests that type 3 would be the preferred option in time if farmers were to invest in gas-powered kit, with biomethane delivered and stored on farm, giving more flexibility and saving trips to another site.

What are the incentives?

For existing AD plants, the Renewable Heat Incentive (RHI) provides an income stream where biomethane is going straight into the gas grid.

There is also a financial incentive provided from the Renewable Transport Fuel Scheme (RTFS), which obliges companies that sell fossil fuels to use an increasing proportion of biofuels such as bioethanol, biodiesel and biomethane to blend into transport fuels.

For example, if biomethane is used to fuel a Waitrose lorry, that produces a certificate and BP or Shell would pay for that certificate.

A proportion of the money is then passed back down the chain to the biogas producer.

While you cannot draw up a viable business plan to build an AD plant solely for vehicle fuel generation just yet, tapping into existing infrastructure and new plants coming online to provide produce for tractors has great potential.

With a minimum investment of £30,000 for a compressor and storage facilities, a farm biomethane plant could start compressing a proportion of its biomethane for use as vehicle fuel.

Then there are the environmental incentives, with the use of a biomethane-powered tractor saving an average of 82% of greenhouse gas emissions compared to diesel, but this is even greater when the gas is produced from livestock manure.

Studies have shown gas produced from dairy waste is 200-300% lower in carbon intensity than electric vehicles charged by wind or solar power.

For farmers and others in the supply chain looking to decarbonise operations and improve green credentials, it can play an important role and is something they can do now rather than wait for hydrogen or electric technology to catch up.

Biomethane will also be important in hitting ambitious targets such as the NFU’s goal of net-zero carbon by 2040, and the UK as a whole by 2050.

Can I buy a biomethane-powered tractor?

Yes – New Holland’s natural gas-powered T6.180 was made commercially available last year. The mid-sized tractor is aimed at AD plant operators for lugging feedstock around or applying digestate in the field. 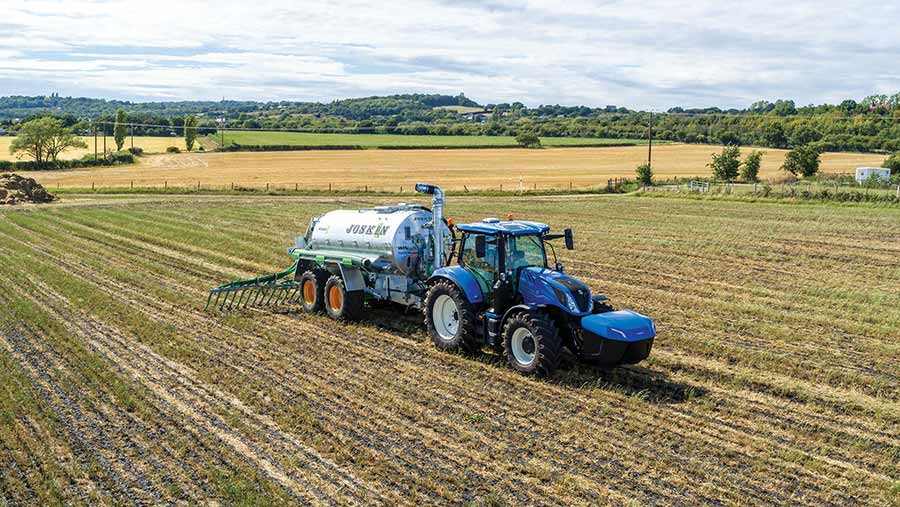 It costs more than a diesel equivalent due to the modifications required to the power unit and other requirements such as a steel fuel tank, rather than plastic, for holding the pressurised gas.

The Basildon-built tractor’s six-cylinder, 150hp-rated engine has the same FPT 6.7-litre block as its diesel counterpart, but the cylinder head is completely different to accommodate spark plugs.

The engine’s turbo charger is in a water-cooled jacket and uses a three-way catalyst for its after-treatment system.

The company says it offers significant reductions in emissions compared to diesel, with particulate matter down 98%, nitrous oxide 62% and carbon dioxide by 75%. 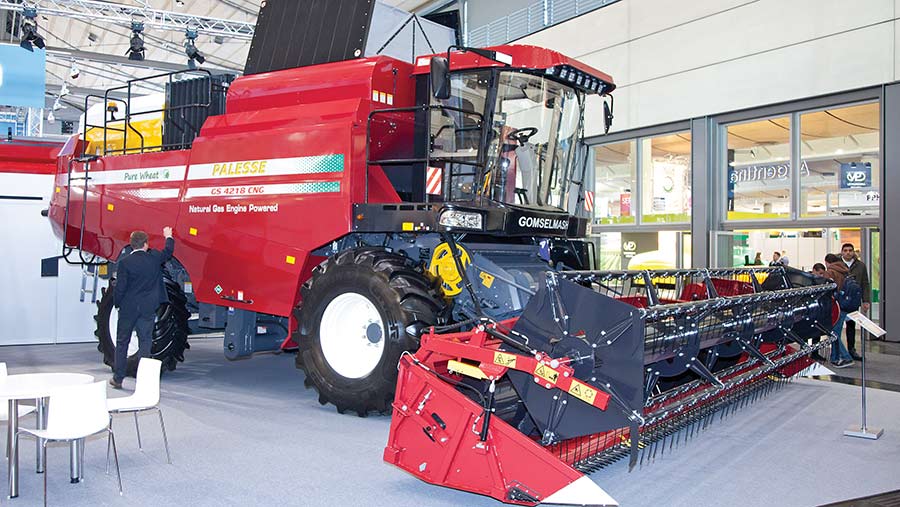 As a fuel source, natural gas is about 25% less power dense than diesel, but Cummins – which has been making natural gas engines for almost 35 years – says this doesn’t mean gas-fuelled machines have to be less powerful, although a larger displacement unit is needed to achieve the same output.

What are the barriers?

The use of biomethane to power farm vehicles has been talked about for years, but after the introduction of New Holland’s T6.180 tractor, the biggest hurdle to adoption has now been cleared.

However, on top of the lack of refuelling infrastructure close to many farm businesses, additional barriers remain.

Theoretically, 12,650 registered tractors could be replaced by biomethane-powered machines, but at a 10% premium over the diesel equivalent and no second-hand market, farmers would initially need to spend more.

Although it should be noted that the CNG Services report says the total cost of biomethane tractor ownership will be in line or potentially cheaper than diesel if use and the value of RTFS certificates is high (as is forecast to be).

There are also the issues of brand loyalty – some farms would not buy a New Holland tractor and at present there is no alternative – and power needs, with large arable farms and contractors in particular requiring more horsepower than the T6.180 can offer.