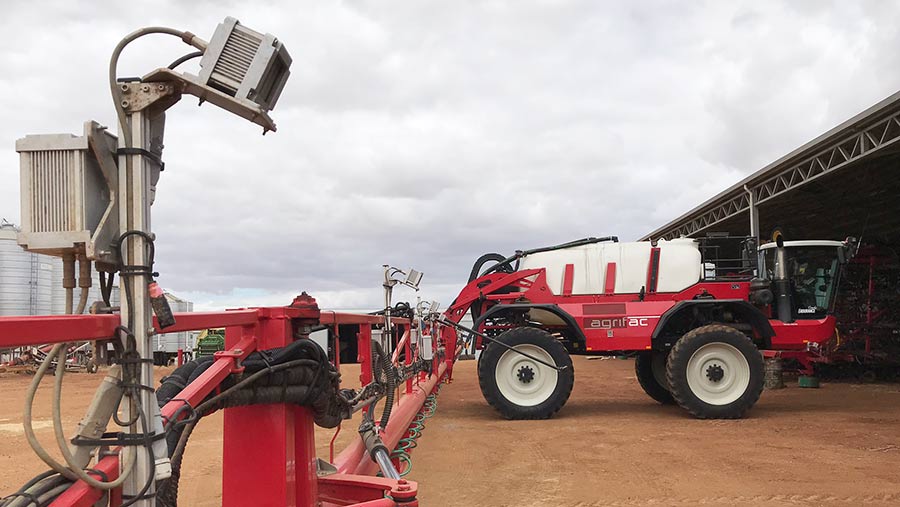 A new weed-seeking camera system on Agrifac’s Condor sprayers is able to detect unwanted plants in growing wheat crops before administering a targeted jet of chemical to wipe them out.

The AiC Plus kit operates down to narrow-angle, single-nozzle accuracy, and can identify and spray weeds at up to 30kph with minimal wastage.

In crops with a sparse but spray-worthy weed population, chemical savings can amount to 90% – worth hundreds of thousands of pounds annually to the biggest growers – compared with conventional fence-to-fence applications.

The complicated software that processes the footage and decides whether to spray or not is being developed by a French tech company called Bilberry, though Agrifac has the rights to use it – along with other manufacturers including Berthoud and Dammann – and has invested millions of pounds in developing the associated hardware.

Their camera kit differs from the two most prominent spot-spraying systems already on the market – WeedSeeker and WeedIt.

The latter enjoys strong sales in Australia in particular, where its fixed-beam units are employed by an estimated 10% of broadacre growers to deal with post-harvest weeds.

However, the technology has remained largely unchanged for almost a decade and relies solely on infrared sensors to detect plants growing on stubbles.

That means they have no capacity to spot weeds in crops, known as green-on-green.

Given the potential size of the Aussie market, seven of Agrifac’s early camera-carrying Condors were shipped to Australia for intensive trials last year.

These centred around the development of algorithms to detect different shapes and sizes of wild radish plants and oilseed rape volunteers in wheat crops, though the company plans to put the finishing touches to other weed types this later this year.

The Condor carries colour cameras mounted at 3m intervals along its boom, which observe 3-6m ahead to pinpoint any upcoming weeds.

Each camera has its own processing module, which allows it to identify target plants by their shape and colour using the complicated algorithms developed by Bilberry.

Once detected, chemical is sent through as many nozzles as required to blanket the weeds. 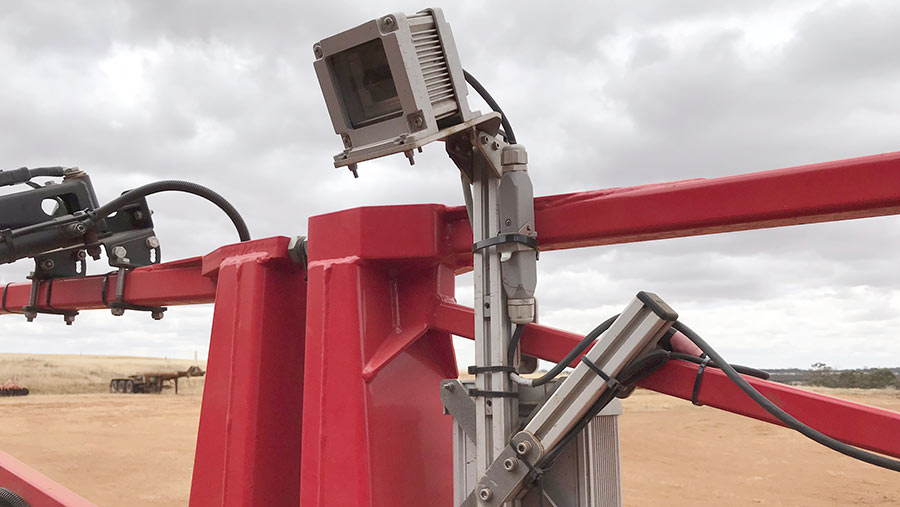 Building the algorithms is the most time-sapping part of the development job, because the processor must be able to detect specific species throughout their growth stages and under all light and field conditions.

To do this, the sprayer records the images it takes and sends them back to Bilberry’s developers, who add them to their enormous picture archives to help to fine-tune the software.

So far, the cameras are only fully geared up to detect green weeds on stubble fields.

The work towards detecting radish in wheat is 60% complete and Agrifac expects to be able to spot other broadleaf and grassweeds in cereals within a couple of years, too.

The system relies on accurate boom levelling to be sure that the chemical is squirted directly at the weed, particularly given the narrower, more accurate 40deg spray pattern of the nozzles. 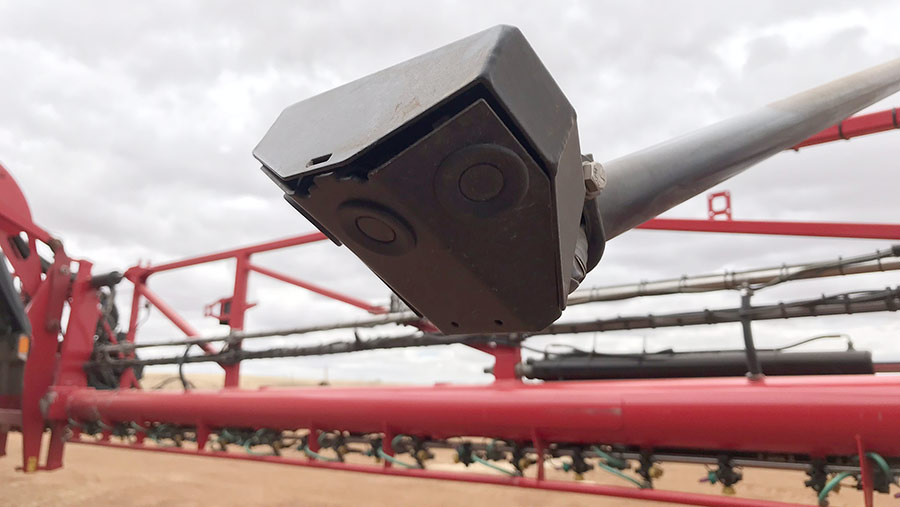 This is achieved using four separate clusters of three wide-view parking sensors that are dotted along the boom to automatically maintain the optimum 500mm working height.

The nozzles operate using pulse width modulation (PWM), a complicated-sounding but actually quite simple way of turning nozzles on and off without altering the pressure in the line.

PWM isn’t entirely novel – several of the big sprayer makers have been offering it commercially for up to five years – but so far it has failed to take off in the UK.

It works by flicking on and off at rapid speeds of up to 100 times/second, stopping and starting the flow of liquid through the nozzles to suit the required rate – perfect for issuing a dose of liquor for a split second.

The tank mix runs through a conventional single-line plumbing system to the outlets, but a little solenoid – rather than a spring-loaded valve – opens and closes the route through the nozzle.

The more liquid that is required, the longer the nozzle is opened for and the larger the pulse width or duty cycle.

Doing it this way means that there’s no variation in pressure, so droplet size and spray pattern remain the same.

Comparatively, conventional sprayers have a rate controller that adjusts spray pressure to increase or decrease the nozzle flow rate to maintain a target dose when forward speed changes.

The weakness of this old-school system is that fixed-orifice nozzles are sensitive to pressure, which can quickly change over undulating ground or around corners.

High pressure tends to cause droplets to become finer and more prone to drift, while coarser droplets limit the fan angle, lessen the uniformity of spray and reduce the efficacy of the actives.

Long term, this inefficient use of pesticides has been linked to the rise of resistant weeds, pests and diseases.

Over-dosing may select for development of high levels of single-gene resistance, while under-dosing can be to blame for polygenic resistance.

What can’t it do?

Using cameras rather than beaming broad-spectrum, near-infrared light at the ground means that night-time spraying is more difficult, so buyers will need to fit a good lighting package if they intend on spraying in the dark.

The system can’t yet map the spray points to give operators an idea of where the problem areas are, either.

That said, it should be fairly easy to generate weed distribution maps, particularly given that all machines of this size will be running a decent guidance system.

Other potential uses for the technology, albeit some way further down the line, include using the cameras to detect disease pressures, or as a nitrogen sensor to monitor green area indexes and apply more fertiliser where necessary.

Such sophistication comes at a price. Aussie growers are expected to have to pay $200,000 (£110,000) for the package that allows green on brown weed detection post harvest.

If they want the capacity to deal with specific weed types then they’ll have to buy further unlock codes.

Given that a new Agrifac Condor with 8,000-litre tank costs upwards of £300,000, things can get pretty expensive.

But for the biggest growers and contractors, the savings on chemical are potentially so substantial that the two should balance out.

So far, three of the new models have been sold in the UK and will be delivered to customers by August this year.

One of those was at the farm of Knud Nymann, who has almost a decade of experience spot spraying with a Weedit machine.

“With the Weedit, we were typically spraying about 15% of the field, which saved us a fortune on herbicide chemistry.”

And with his 12,000ha farm in the Great Southern region from Gnowangerup to Wellstead now under the wing of Agrifac’s AiC Plus system, he expects that figure to shrink further.

“We’ve got several yield-sapping weeds to keep on top of – radish, ryegrass and wireweed in particular – and this system should help.”

“And with chemical costs continuing to rise and environmental pressures greater than ever, it seems a sensible investment for us.”

“The technology is expensive, but justifying its cost is easier across a large acreage like ours because the savings are so great. The more weeds we have, the slower it pays for itself.”

Added to that, herbicide resistance remains a challenge, so Mr Nymann is having to run more intensive spraying regimes.

“It means our cost per hectare to spray is rising, particularly with weeds such as ryegrass that require a much stronger dose of chemical. However, we can justify using the more expensive products because we will use far less of them.”

The two existing spot spraying systems – Dutch-designed WeedIt and Trimble-owned WeedSeeker – are more basic than Agrifac’s AiC and have remained largely unchanged for almost a decade, targeting only green areas with general weedkillers such as glyphosate. 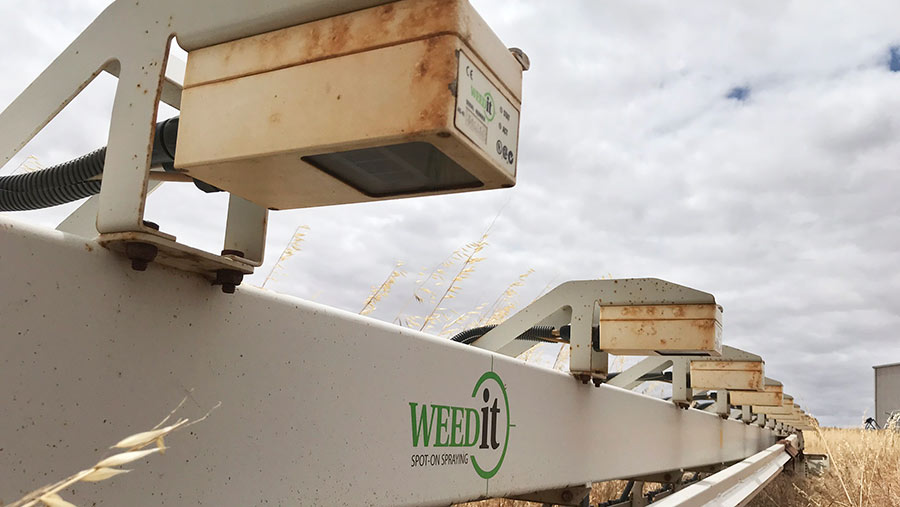 They work by shining a beam of broad-spectrum infrared light at the stubble to detect live plant matter.

Chlorophyll responds to the red light by absorbing it and emitting near-infrared back on to the sensors, which decide whether to activate the nozzle solenoid or not.

WeedIt nozzles are carried on a fixed beam to maintain a height of 500mm above the ground, with the sensors sticking out in front and look straight downwards into the canopy, while WeedSeeker is designed as a retrofit kit for regular crop sprayers. 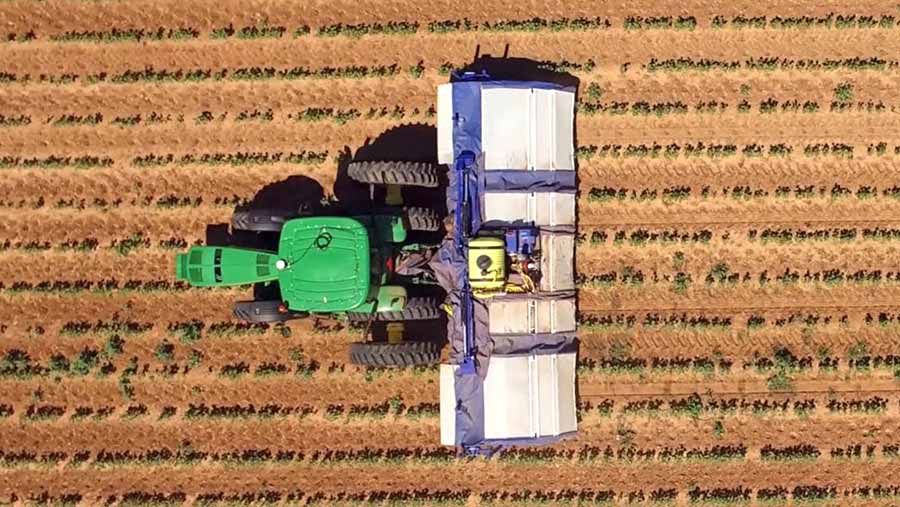 The US start-up has developed a See and Spray range of trailed sprayers for use in crops such as lettuce and cotton with an integrated computer vision system to only apply chemicals where weeds are present.

Like the system built by Agrifac/Bilberry, it uses a combination of computer vision and sophisticated machine learning algorithms to identify plants and make decisions on weeds of many species and sizes.

In can spray them selectively using custom nozzle designs with accuracy down to just 2.5cm.