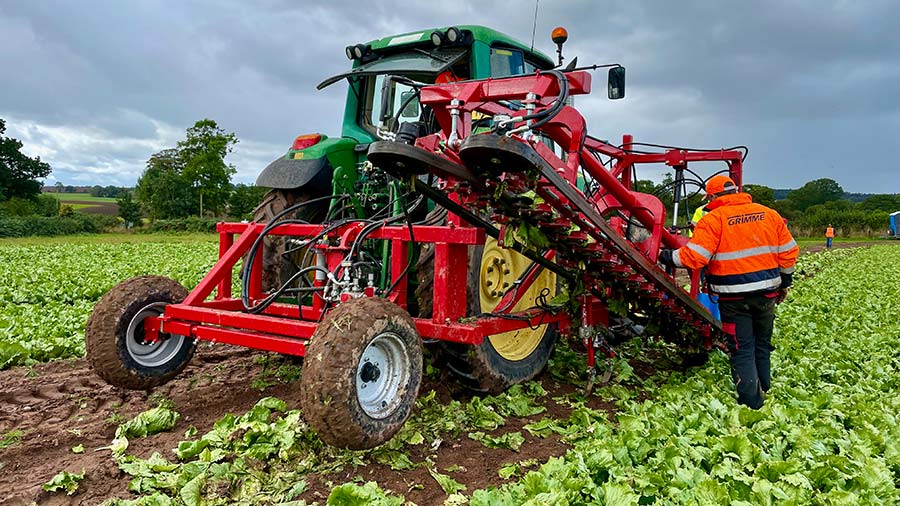 Mechanical lettuce harvesting is a step closer to reality thanks to an Agri-EPI project, established to solve the problem of crippling labour shortages in the fresh produce sector.

Whole-head lettuce is the UK’s most valuable field vegetable crop – with a market value of about £178m – but harvesting is still a painstaking manual task, requiring pickers to bend over and cut the stem at precisely the right point to satisfy supermarket quality standards.

Finding reliable, skilled labour to do this is becoming increasingly difficult, and the problem has been exacerbated by Brexit and the Covid-19 pandemic.

Work began in April 2021 with a series of partners, including Grimme, Harper Adams University, G’s, PDM Produce, Imaging Development Systems and the Centre for Machine Vision at the University of the West of England.

After months of design and fabrication work, the first prototype harvester was ready for field testing, with early predictions suggesting a possible 50% reduction in labour.

The single-row lifter has a pair of pointed, rotating “torpedo” augers at the front that push under the lettuce either side of the root and gently lift it out of the ground.

The plant is then supported, in an upright position, by a pair of pocket belts, before another pair of pinch belts – adapted from a leek harvester – grab the root and transport it to a processing unit at the rear.

The implement is mounted on the side of a tractor and the driver guides it along the row using a camera mounted at the head of the lifter, although this process could be automated in the future.

Precise depth control is crucial for lifting the lettuces cleanly, so there is an automatic function to help set this accurately.

Also in development is a system for stripping the outer leaves from the lettuce and cutting the stalk with pinpoint accuracy to meet quality standards.

Cut too low and there is an unacceptable amount of stalk left in place, but cut too high and there is a risk of damaging the cells and causing pinking that can render the product unsaleable.

Both these processes require high-end camera technology that can spot differences between plants and accurately guide the mechanical leaf strippers and knifes to the correct points.

The camera-guided part of the system is some way off commercial availability, particularly for the ultra-fussy pre-packaged market.

However, it could be applied sooner in the processing sector, where outer leaves tend to be left in place to protect the plant during transport.

As an interim step, the lifting element could be introduced to remove the need for pickers to bend over and cut the crop by hand – a notoriously unpleasant task that some workers are reluctant to do. Instead, they could be redeployed in the trailed processing unit, cutting roots off lifted lettuces by hand ready for wrapping.

Once the design has been perfected it will be possible to incorporate multiple rows of lifters into a single machine so that the output equals or betters that of manual workers.