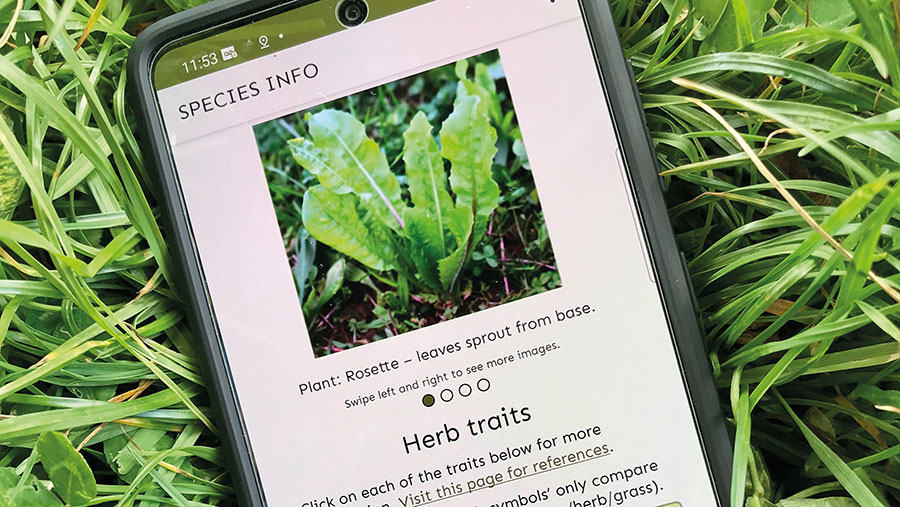 A new app has been launched to help farmers identify and monitor different species in their herbal leys.

The Multi-Species Sward app has been developed to provide farmers with easy-to-access information about herbal leys. It’s part of the Toolbox of Multi-Species Swards (Toms) project, led by Cornwall’s Rural Business School at Duchy College and Rothamsted Research North Wyke.

“There is a lot of interest in herbal leys, but information about them is quite disparate,” says Toms research leader Gemma Eales.

The app has four features:

Each score is based on published literature, whose references can be accessed from the app if the farmer wants to research a particular trait in more detail.

The recording and surveying features enable users to compare what was sown with what grows.

“It means farmers can drill down to what really works on their farms,” says Mrs Eales. “As the lifetime of the sward progresses, they can see which species are doing well. If they do several surveys within one season, they might see how one group of species declines as another increases.

“After, say, four years of monitoring, they will see what established, what grew well, what persisted well and what might grow again, giving them an evidenced base for decision-making.”

Who can use the app

The app is free and available to Android users. With further funding, it will be rolled out for iPhone. For now, users can download a PDF version of the species and traits parts of the app. A PDF of a series of information cards is also available. Email multispeciessward@cornwall.ac.uk for details.

Toms is an Agri-tech Cornwall and Isles of Scilly initiative, part-funded by the European Regional Development Fund, Cornwall Council and the Council for the Isles of Scilly. The app was developed at FoAM Kernow.