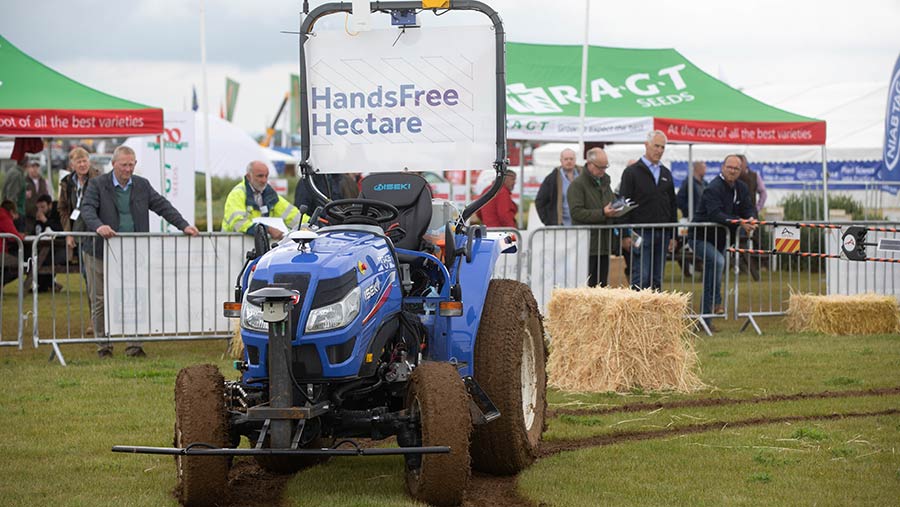 The Hands Free Hectare project has demonstrated a range of new safety features at the Cereals event in Lincolnshire this week.

The next stage of the project will see the team from Harper Adams University and Precision Decisions move on from farming a single hectare field autonomously to a 35ha farm with both winter and spring crops.

After successfully harvesting a 7t/ha crop of Zyatt winter wheat last season, the project has taken a break from active crop growing to focus on developing technology to allow the autonomous machinery to safely move between farmyard and field.

This has resulted in a new system that is able to pause when it detects pedestrians before moving off again.

Previously, the machines would completely shut down and need resetting when an obstacle was identified, but will now be able to navigate around the farm on their own.

However, identifying obstacles in the field itself is proving more of a challenge.

“The system is designed for movement from one place to another.

“When a crop is in the field, it is very difficult to analyse for obstacles, so that is still a work in progress,” said robotics engineer Jonathan Gill.

The new system has also been linked to gates that open automatically as the tractor approaches, allowing vehicles in and out of fields while keeping pedestrians out.

In the field, the steering accuracy has been vastly improved thanks to the addition of Farmscan Ag Autosteer as a company partner in the project.

Although drilling misses had already been reduced from 2.5% to just 0.35% between the first and second crops grown, the new steering system is a further step up, allowing the tractor to navigate on the same line continuously for the two days of the show.

“It’s so straight that if you tried to keep to that line yourself, it would be difficult,” added Mr Gill.