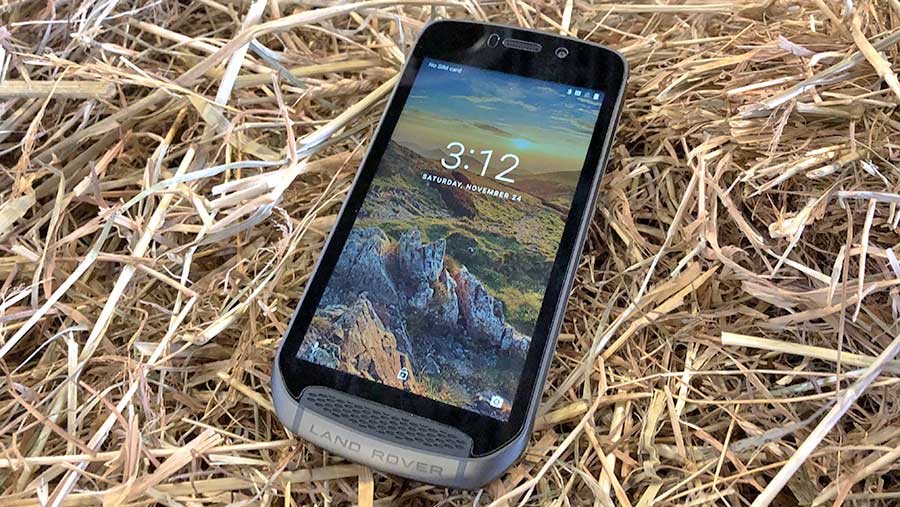 Land Rover fans who want a smartphone to match their rugged workhorse are in for a treat with the Explore – a tough handset built to take the punishment of life at the hands of a farmer.

We took it to a livestock farm in Somerset to find out how it coped.

It’s a smartphone that wants to be the kind of 4×4 farmers and the landed gentry love. The Land Rover Explore is a hard nut device designed to shrug off the sort of mishaps that would kill your typical smartphone.

The makers claim the Explore takes styling cues from Land Rover vehicles, pointing to the Discovery-esque grille beneath the 5in screen or the grooves on the back which apparently look like roof bars.

Launched this summer, this is a phone primarily aimed at outdoorsy types who love marching around the Lake District with a tent strapped to their backs at the weekend.

But before your eyeballs roll into the back of your skull, it’s worth saying this phone’s ruggedness, super-long battery life and GPS-signal booster will be of genuine interest to farmers too.

How tough are we talking?

Pretty darn tough. It’ll withstand a gut-wrenching 1.8m drop onto the unforgiving concrete floor of the cow shed no problem.

We made extra sure by dropping the Explore five times from maximum height and it only suffered a few minor scratches. I

t’s worth mentioning the phone does come with a polycarbonate case but it’s not the most elegant of things.

It’s also waterproof – you can dunk it in water that’s 1m deep and forget about it for half an hour without it soaking up liquid like a sponge.

Sure you’re probably never going to do that, but it’s nice to know the Explore will tolerate being used in the driving rain or a rinse under the tap.

Plonking it in a muddy puddle didn’t upset the Explore either – the soggy screen still reacted nicely to our touch. It also has a special mode which means it will detect your touch even if you’re wearing gloves.

Watch the video below to see how the Explore did in our farmyard test.

What are the technical highlights?

The most obvious highlight is the Explore’s “Adventure Pack” – a magnetic 3,620mAh battery pack which sticks to the back of the phone for almost double the lifespan between charges.

The pack also houses an extra antenna to boost GPS signal when you’re out in the sticks and cellular signal is weak.

We used a Explore with and without the additional bulk of this pack for an entire weekend and didn’t need to charge it once.

Yes, it almost doubles the thickness of the handset to a whopping 22mm – we wouldn’t want to sprint after sheep with this brick swinging around inside our pocket – but it’s not like you need to pair phone and pack 24/7.

Aside from that, this is a lot like a normal Android device.

The Land Rover associations have been stretched somewhat with the dashboard app which allows you to set up a custom view of information relating to time, weather and location.

The ViewRanger app may be of some interest to farmers as it allows you to ditch those tatty old Ordinance Survey maps in favour of a digital version.

Overall, these apps will probably excite the active adventures who love dangling from cliff edges in Snowdonia more than the farming crowd.

How much is it?

The Land Rover Explore costs £599 and available on EE and Vodafone contracts. We’ve been reliably informed December deals will knock handset prices down to about the £450 mark.

Considering you can get decent Android phones from as little as £250 these days, we wouldn’t exactly call the Explore the bargain of the century.

However, when you consider its heavy-duty design is likely to outlive pretty much all standard smartphones subjected to farm life it does start to make more financial sense.

The Explore’s rugged design is well suited to the tough life working on the farm – it sailed through all of real-world tests we threw at it.

We were especially impressed by how responsive the touchscreen was right after a dunk in a muddy puddle or when used with gloves.

The additional weight and bulk of that Adventure pack is something you’ll always notice when switching from a typical smartphone – but we rate it highly in terms of its practical uses on the farm.

We’re confident it will have enough juice to make it through the longest of slogs and the GPS signal booster could come in handy in one of rural Britain’s many coverage grey areas.