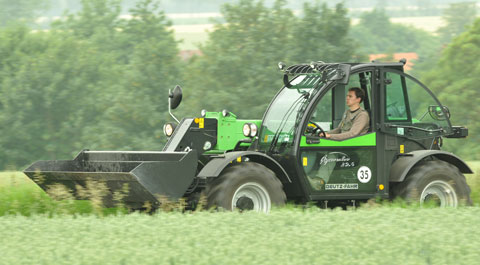 Loader specialist JLG makes the Deutz-Fahr Agrovector loader. Powering the hydraulics is a Bosch Rexroth pump with a maximum flow of 102 litres/minute and a load-sensing version is available too.

At our standard measuring mark the loader managed just more than 2.4t, below average for the test. In terms of average lift power, too, the Agrovector was behind the competition with little more than 3.3t, as was its 4t breakout force.

However, the Deutz-Fahrs’s strength is in its boom, which managed 1.8t at full boom extension – the best in the test. This means a heavy pallet can be lifted from the furthest corner of the barn. 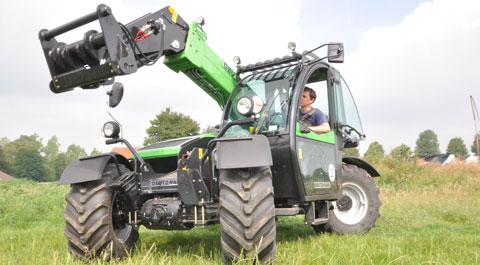 The Agrovector is also out in the front row for speed of operation when using the various hydraulic functions – it proved a very fast mover.

The bucket tipped slightly outwards on the lift but, with the pallet forks, the loader showed no weaknesses. A shock absorber isn’t available with the Agrovector.

The Agrovector’s Deutz engine produced 102hp. Drive is hydrostatic with two speeds and 3.6t of pulling power available in both, though a little more would have been better.

However, this loader performed well and was ahead of the pack with a top speed of 15kph. However, Deutz still has to do some more work on machine control with the inching and the brake pedals – it’s a good pedal, but it’s heavy to operate. 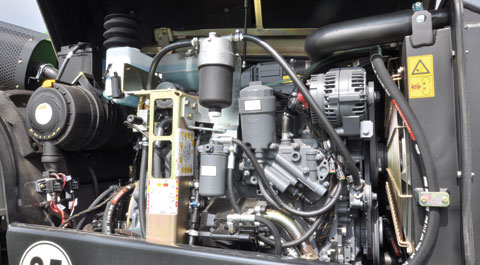 There are pre-selection buttons for the steering mode and automatic centering of the wheels is standard. The steering is light – only four turns were needed from lock to lock. Very good stuff.

From the joystick the driver operates the outside spool valves and boom extension. Flowrate for other functions can be controlled via a central display and control can be transferred to the rear – that works very well.

Also possible, but only by getting your dealer to adjust it, is shifting some of the controls such as joystick operation, boom height and end-section damping to the display.

The shuttle is operated by a lever to the left of the steering wheel, though we would have liked to see an orange identification on it. 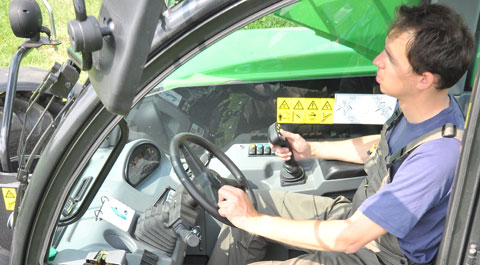 This is particularly so because drive speeds can be changed here too, and the lever to the right of the wheel for indicators and lights looks exactly the same.

The cab is well laid out and getting in is easy, thanks to hand-grips in the right places. We were impressed by the amount of space for legs – even big drivers can operate the foot pedals without problems. The upper part of the door can be folded down but doesn’t latch securely.

The ventilation and air conditioning controls have been tucked away in the right-hand rear corner, although there’s actually enough space in front where operating them would have been easier. 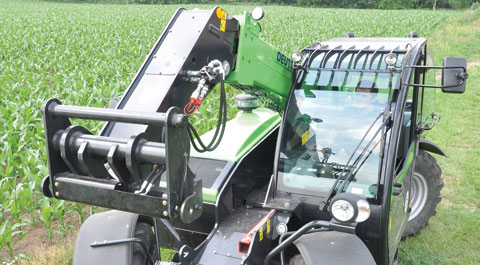 Forward vision is first class. The all-glass door to the left means the view in this direction is also hard to beat. However, to the right, the massive engine hood gets in the way and visibility rearwards is marred by the high exhaust. The front windscreen stretches right to the roof area in a single piece of glass, allowing good sight of the attachments, even when the boom is fully extended.

A large engine hood means the engine is every accessible.

There’s no central lubricating point – to grease the boom you have to clamber under it after it has been raised and secured. 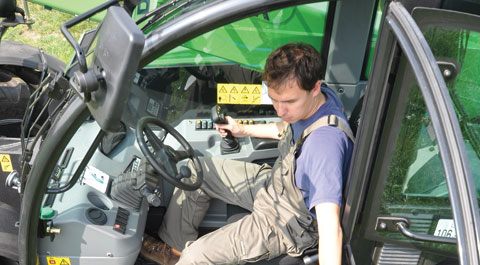