In the corporate world of farm machinery, there’s an expression that gets bandied about on a regular basis – “a full-line offering”.

While this may sound like standard corporate guff, it’s basically manufacturers trying to push themselves – and their dealers – forward as a one-stop shop for every conceivable piece of ag equipment. 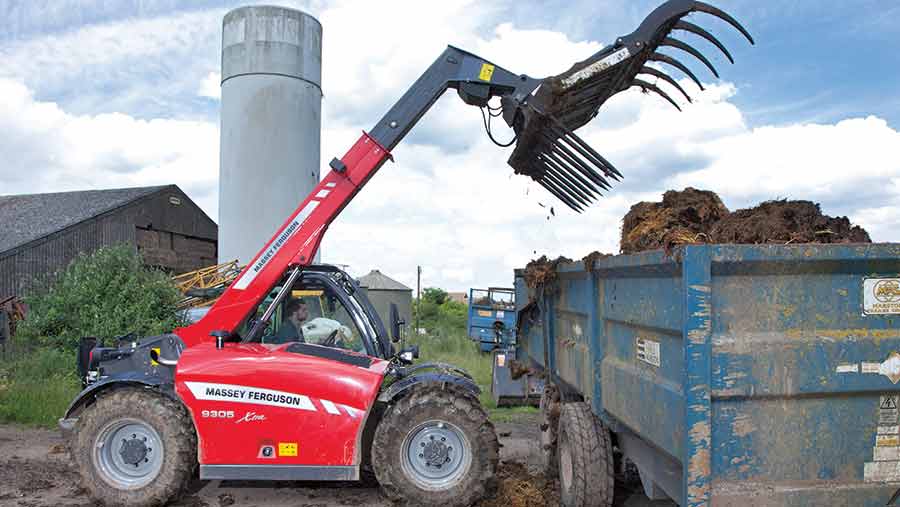 Generally it involves a strong brand painting another, usually lesser-known company’s kit in its colours. It is a strategy that has worked well for some and not so well for others.

The loader market has often proved most problematic – few big players have succeeded to compete with specialist brands that concentrate solely on materials handling.

John Deere struggled bravely on with its Matbro-derived loader line-up, but eventually decided it just couldn’t pay its way.

New Holland’s forays into the game with blue- and yellow-painted Manitous, as well as machines built at its own factory in Italy, haven’t ever made much headway.

Claas seems to be the first big brand to have succeeded, although it has not been without its rocky patches.

The Caterpillar-built Targo was not a favourite of farmers, with the phrase: “You know when you’ve been Targo’d” denoting their reputation.

However, the company swiftly turned this around with the Scorpion, arguably one the best hydrostat handlers on the market.

Even this hasn’t been easy as Claas announced last year that it was ending its badge-engineering agreement with Kramer and was switching loader manufacture across to Liebherr instead.

MF gets in on the telehandler act

Wanting to follow that model, Massey Ferguson has been desperate for years to get in on the telehandler game and started offering red-liveried loaders from French firm Sambron back in the 1990s. And although you might not have seen many of them, they have continued to hide away quietly in a corner of the MF pricelist since then.

However, we have been told that time of quiet is set to end with the arrival of the latest loaders built in that same French Bobcat factory as before.

The 9305 Xtra is to round off the bottom end of the MF range with a 3t capacity and 5.8m maximum reach. It’s a compact machine – in the usual format of 24in wheels it stands less than 2.4m tall. On 20in wheels and with a low-profile cab, this is bought down further to 2.15m.

Power is provided by a 100hp Deutz 3.6-litre engine that meets the latest emissions regs using only a catalytic converter and EGR – no AdBlue here – yet. It drives a two-range hydrostatic transmission to an optional top speed of 40kph.

Similar to previous models in all but colour scheme, this new MF is identical to the Bobcat handler line-up.

Massey Ferguson is marketing it to mixed and livestock farmers who have what it calls “traditional yards”.  The idea is to create an all-round machine that is still low and narrow enough to go in the smallest of barns.

We put a full-spec 9305 Xtra with standard cab and 24in wheels on test at a mixed farm to see how it performs. 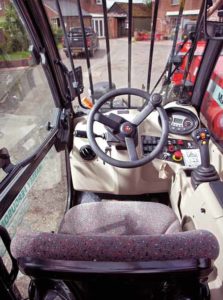 In the cab it is clear to see this is a Bobcat-built machine.

The construction giant’s logo is surreptitiously stamped all around, although the beige cab trim, switchgear and general quality does have a Massey Ferguson theme to it.

When in the seat, the most notable thing is the sense of visibility.

A high seating position mixed with a low boom allows all four corners of the machine and especially pallet forks to be seen easily.

This is thanks to both the engine and pump being mounted longitudinally under the bonnet, giving more space for the boom in the middle.

This is also slightly offset on the machine, allowing for a much larger cab.

There seems to be glass and mirrors everywhere. The full glass door and window in the rear quarter are surprisingly useful when maneuvering in close quarters.

The stable door and opening rear window also prove handy when working with people outside the machine, although the frameless upper half feels as if it could shatter with one touch of a stanchion.

The switch layout is a bit bizarre though. For example, the windscreen wipers aren’t on the steering column, but on the dash and the button to notch between high and low range is where the horn normally lives.

However, the design team has made the genius decision to have the option of the forward and reverse shuttle on both the steering column and the joystick. As long as one is in neutral, the other can be used. This makes it a machine that anyone can jump on and drive with confidence and gives versatility when swapping between jobs.

The Massey Ferguson is arguably one of the most comfortable handlers on the road. Underneath the cab, there are large rubber cab mounts along with a Zebedee-style folded steel spring, giving it an unrivaled ride.

Couple this with excellent boom suspension and it will match many tractors for comfort on the road.

When it comes to the drive train, for a hydrostatic transmission, it has great pulling power at higher speeds. While most hydrostats whine and lose a lot of speed when heading uphill, this doesn’t. It still loses a bit, but nowhere near as much as others.

We wanted to see how well it would haul a trailer, but our efforts were frustrated by the pick-up hitch’s inability to hoist and latch a half-loaded muck trailer. 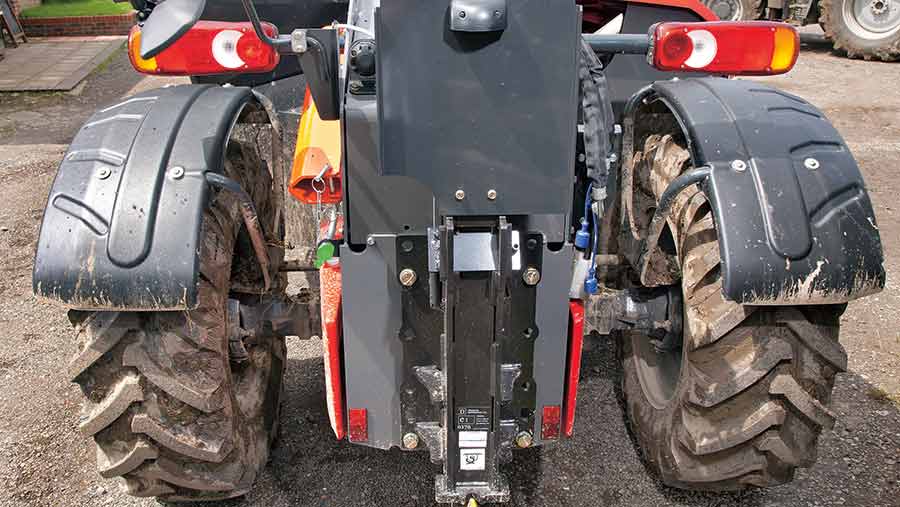 To make sure you don’t have a runaway on downhill runs, when the machine goes over speed, the hydrostat restricts the oilflow, bringing it back to what it deems a sensible speed. Pushing this type of drive over speed is a quick way to cook it and wear out seals, so this is a great idea to stop this.

However, it does it so aggressively, it almost pulls you out of the seat. With a good, cautious driver at the helm, and a touch of the brakes, this should rarely happen.

In the yard is where a telehandler proves its worth. The short wheelbase gives a tight turning circle and gives a fantastic sense of maneuverability. The steering is light and quick, along with all hydraulics. 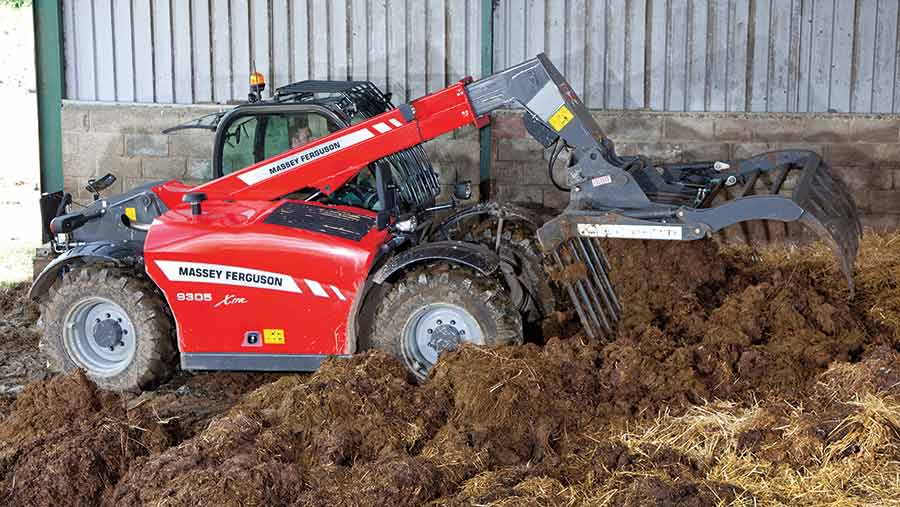 Swapping attachments requires the operator to become a bit of a contortionist – a safety switch dash pulls the locking pins in for a matter of seconds, so it has to be held down with the left hand while the right puts the carriage in the right place.

Countering this, the hydraulic third-service connectors are a real stand-out feature.

Not only are they robust-looking and positioned out of the way but, simply pushed back on their spring-loaded collars, the flat-faced couplings have a clever mechanism for dumping the pressure, even when the machine is still running. It’s the best system we have seen.

All boom movements have quick cycle times, sometimes too quick – they can be a bit on or off.

Boom and third-service oil flows can be restricted independently via the dash and plus and minus buttons on the joystick, but it is still difficult to do small, controlled movements.

It’s a shame it gets bogged down by safety devices to follow regulations – as with all modern machines, it wont let you do what it’s capable of. 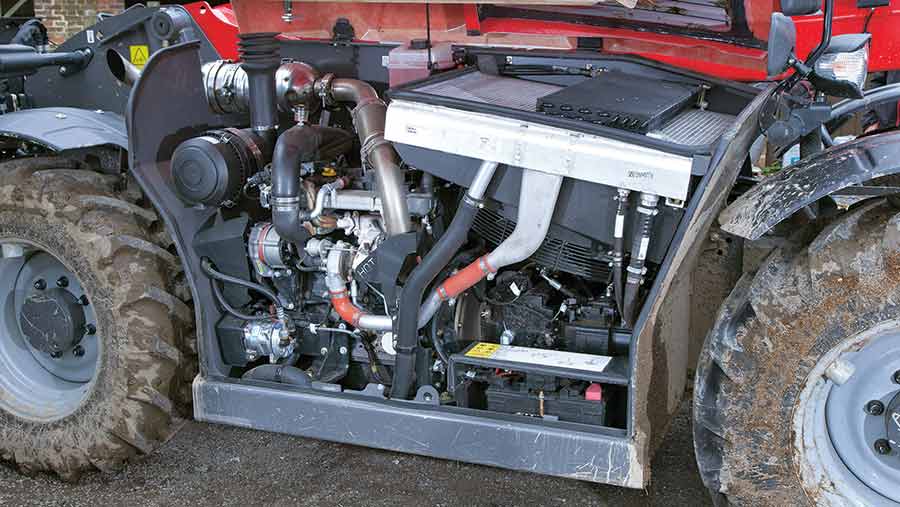 The biggest issue for this loader is its headstock. Manitou or Bobcat attachment carriages are the only factory options. British manufacturers such as Cherry and Albutt are able to make others.

The major concern is the lack of dump angle when working at height. With the boom at full height and the headstock at full tilt, the bottom of the bucket is only level.

Loading a trailer with sticky muck proved to be a nightmare where it wouldn’t tip far enough. We can only imagine how bad this could prove to be when you have an irate lorry driver waiting to get grain loaded.

It will tip back more than enough – for handling bales it was great as it can sit them right back on the frame rather than hanging on the spikes – but this also means with a bucket it’s easy to throw material backwards over the cab. Not ideal.

This is a fundamental design flaw and one Massey says it has no current plans to put right. We are pretty sure the likes of Messrs Cherry and Albutt would overcome this with the right frame geometry.

The list price is £2,000 for a replacement Matbro, JCB, or Sanderson carriage or £1,350 for a conversion. MF won’t supply the loader without a headstock, so you’ll end up paying twice for homologation reasons.

The 9305 Xtra ticks a lot of boxes apart from a major one. It’s comfortable, agile and easy to use.

However, the limited dump angle lets the machine down massively and will hugely limit its potential in the market. It’s such a shame because in all other respects this is a great little loader.

When it comes to money though, the Massey does look good. It’s positioned some £10,000 cheaper than most of its rivals.

Those are some pretty attractive numbers, but Agco needs to be careful that it doesn’t overlook one big issue when it comes to making its sales forecasts.

The Massey dealer network is pretty comprehensive across the UK, but most outlets will already have a mainstream telehandler franchise – persuading them to stray from that will be a pretty hard task.

And then there’s the issue of these newer Bobcat-built machines’ unknown second-hand values.