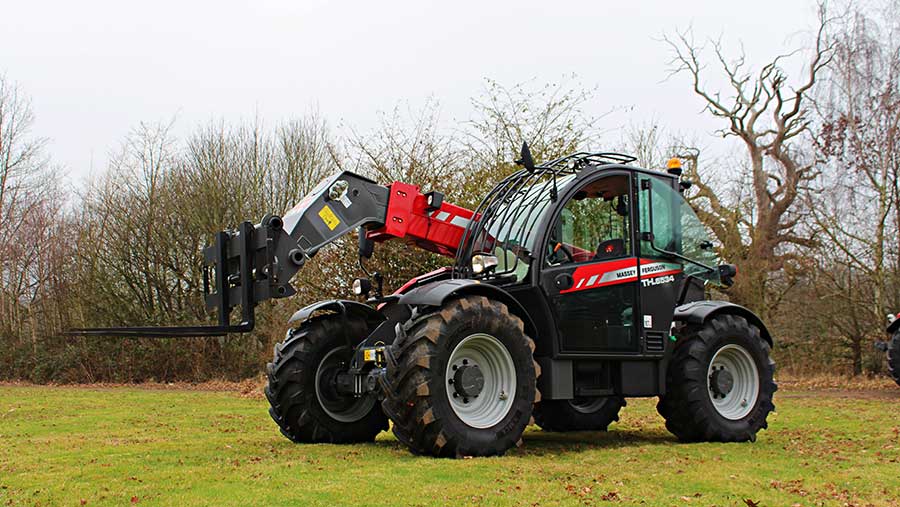 JCB might have the lion’s share of the UK telehandler market sewn up, but there are plenty of makers jostling to relieve it of a few sales – such as Massey Ferguson with its updated TH range.

The four new models, which replace the outgoing 9000-series machines,  range from the entry-level TH6030 with 6m reach and 3t lift capacity up to the TH7038 with 3.8t lift and 7m boom.

As with the 9000-series, the entire range is built by Bobcat in Pontchateau, north-west France. This means they’re almost identical to Bobcat’s own TL machines, other than the colour scheme and some slightly different options.

Previous MF and Bobcat telehandlers were fitted with a Deutz powerplant, but the TH range now comes with a 100hp or 130hp four-cylinder from Bobcat’s parent company Doosan.

Although not that well known in European agricultural circles, the South Korean manufacturer is big in the construction industry, particularly across Asia.

The Doosan block meets Tier 4 Final emissions regulations with a squirt of AdBlue, and its neat layout means the hood is a good bit lower than on its predecessor.

In the transmission department, there’s still a two-speed hydrostatic gearbox that’s shifted using a rocker switch on the dash.

This is a stationary change only, but if the driver needs to drop a gear in a hurry there’s a kick-down button that lowers the speed range of the hydrostatic motor.

There’s also the option of a left-hand forward/reverse shuttle lever, as well as a switch on the main joystick.

MF is boasting that the TH telehandlers have some of the fastest cycle times in the market, thanks to a hefty 190-litres/min pump.

However, some of the smaller and lower-spec machines will have a steadier 100-litres/min version.

Other nice-to-have features include a pressure release system on the front hydraulic couplers. These dump oil back into the tank to put an end to wrestling with stubborn hydraulic pipes. There’s also an electronic switch that can be teamed with a diverter value on attachments to effectively give a fourth service.