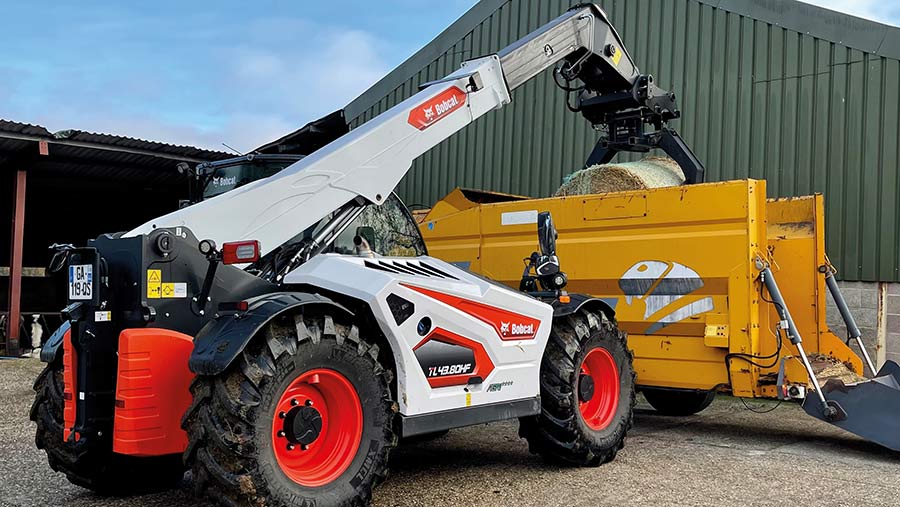 While JCB may continue to occupy the long-coveted throne in the competitive telehandler market, Bobcat is becoming an increasingly viable challenger thanks to a drastic interior upgrade for its new R-Series range.

More than two decades since its acquisition of Sambron and production of its first telehandler, the company is pouring an increasing amount of money and effort into the agricultural sector.

Spurred on by an apparently increasing market share, it now has 24 dealerships across the UK, four of which are agricultural specialists.

The Doosan-owned manufacturer is also broadening its range, with seven agri-spec models now in its ranks.

The machines are available in a variety of spec options, from a somewhat pessimistically named 1 Star, all the way through to the plusher 4 Star. 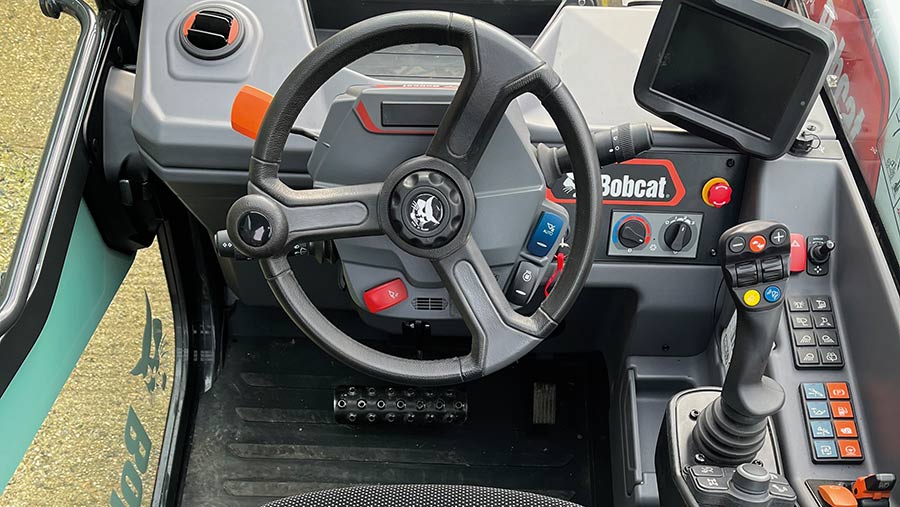 Putting previously simple interiors firmly in the past, the new cab is more thoughtfully arranged and functional. In fact, our 4 Star Agri test machine came equipped with all the bells and whistles.

From a suspended seat to sandwich storage, efforts to improve overall comfort and practicality have resulted in a host of new provisions.

The redesigned steering column now telescopes and tilts, and a new lunchbox compartment can fit a 1.5 litre bottle, and be either heated or cooled to prolong the lifespan of its contents.

However, aside from the standard features of a built-in radio and Bluetooth connectivity, the 7in display is tricky to navigate.

The programming options are fairly extensive and can be set up to record hours taken to perform a job, or to display a live feed of the rear-view camera when reversing. 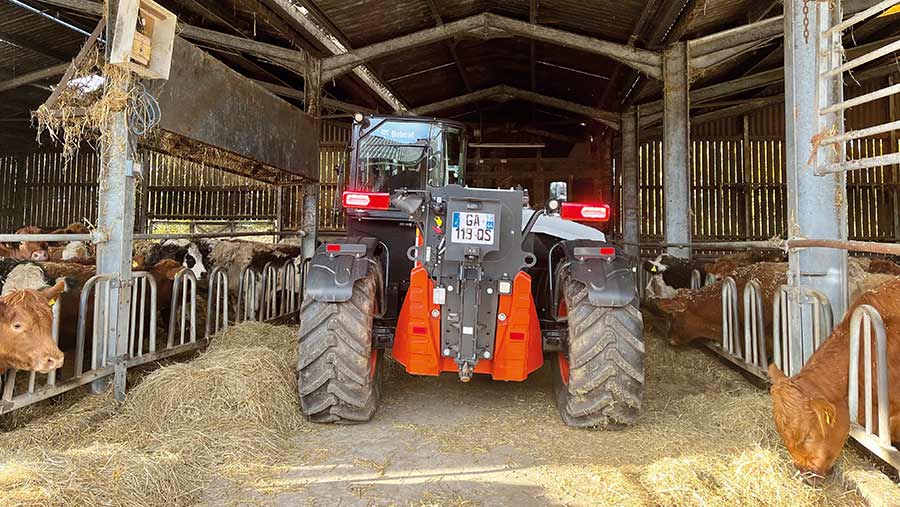 This was useful when attaching implements to the rear tow hitch, and added an extra viewpoint that is otherwise blocked by the 1,300kg counterweight.

Having listened to complaints of poor visibility in the previous model, the engine hood has been redesigned to slope lower. As a result, visibility from the cab is excellent. 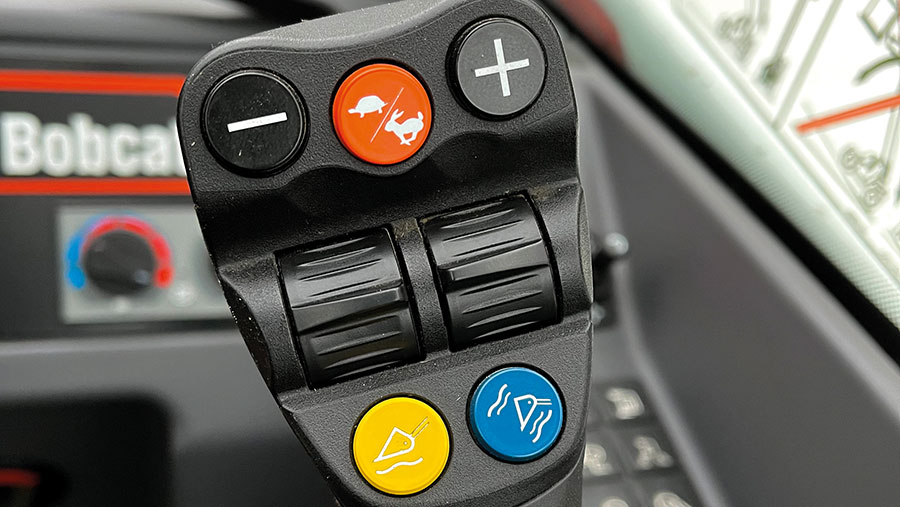 Elsewhere in the cab, the overall ergonomics of the controls have been improved.

The forward/reverse shuttle on the steering column is replicated on a joystick rocker, and there are also new functions for bucket shaking, return to ground and an auto-grab control that opens and closes the attachment automatically.

Colour-coded sections neatly divide the control panel, with orange buttons for engine and transmission functions, blue for hydraulics, and black for utility controls.

These are located close to the armrest-mounted joystick, meaning the driver needn’t stretch far to use them.

Working in low-light conditions isn’t a problem either, and the placing of two attachment-facing 12,000-lumen LED lights on the boom is pretty handy now that the winter daylight hours are restricted.

The HF designation refers to the 190 litres/min “high flow” hydraulics. These are standard on the large models and deliver particularly quick cycle times, while the compact models in the range are limited to 100 litres/min.

Flow to the auxiliary valves can be adjusted, and there’s an automatic pressure release system for attaching hydraulic hoses. 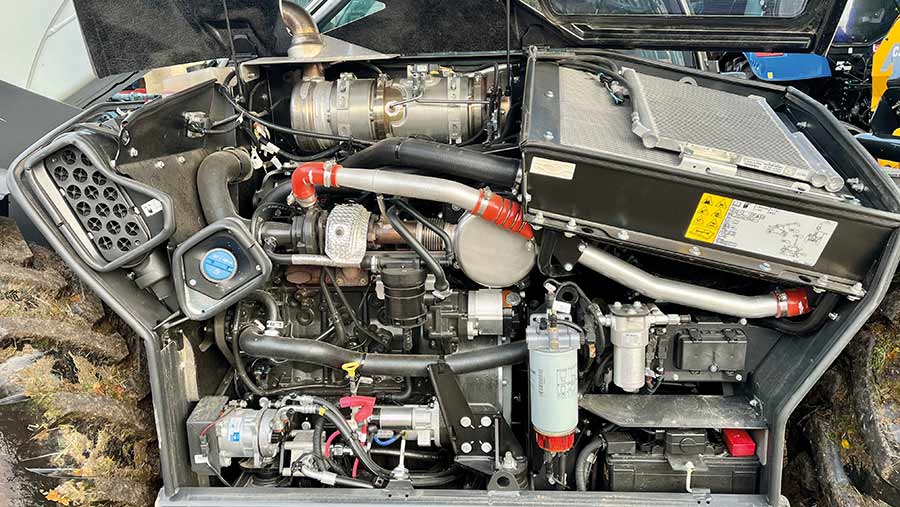 The range-topping 43.80 is powered by a 3.4 litre, four-cylinder D34 Doosan engine that is now Stage 5 compliant, having been fitted with a diesel particulate filter to accompany the AdBlue tank in countering emissions.

Offering a power output of 135hp and 500nm of torque, the biggest model in the R-Series Agri range is still relatively modest when compared to its 150hp JCB rival.

That being said, we didn’t find it lacking in the power department. 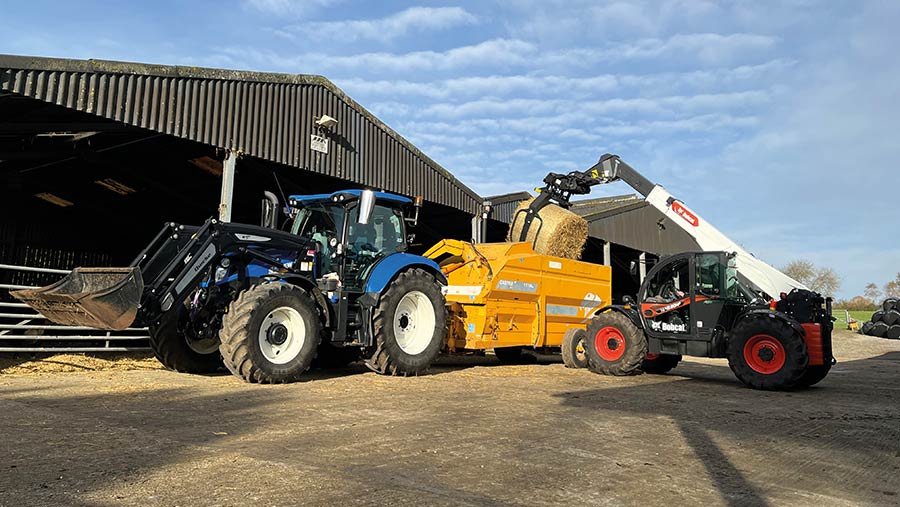 The hydrostatic two-speed transmission is made by Dana Spicer, with a high and low range option for each gear, along with “dynamic” and “standard” driving style settings.

Dynamic mode delivers a peppier response – and can be combined with the automatic boom float that kicks in at 5kph to make the overall ride smoother.

An additional steering mode has been added to accompany crab, two-wheel- and four-wheel-steer.

The new semi-crab setting allows the angle of the rear wheels to be set before steering with the fronts, so you can edge that little bit closer to shed walls.

Bobcat also claims the new model is 8dBa quieter than before.

This is apparently due to new cab and engine compartment insulation, along with better fan management and minor modifications to the engine, though in reality the result is about as effective as a chocolate teapot.

When tested on the road and at a top speed of 40kph, the characteristic sound of the hydrostatic transmission became increasingly whiney, with enough noise distortion to smother any rogue Abba tunes escaping the radio.

Perhaps more importantly, the engine and transmission noise also drowned out the sound of the handler’s indicators, which are easily forgotten due to a lack of automatic cancelling.

Criticisms of basic cabs, a lack of boom controls and restricted visibility have no founding in Bobcat’s new R-Series machines, where nips, tucks, and plenty of cosmetic work have resulted in a combination of easy-to-use controls and comfortable yet hard-wearing materials.

Stand-out features such as the incredibly sharp brakes and better visibility over the engine bonnet make the slightly grating driveline whine easier to overlook.

Bobcat’s biggest challenge will be competing with the likes of JCB for sales, particularly as second-hand values remain something of an unknown.

The flagship model tested has a list price of £88,250, but those willing to go frill-free with the basic-spec 1-star Agri version can trim that back to £76,850.

❌ No auto-cancel on indicator