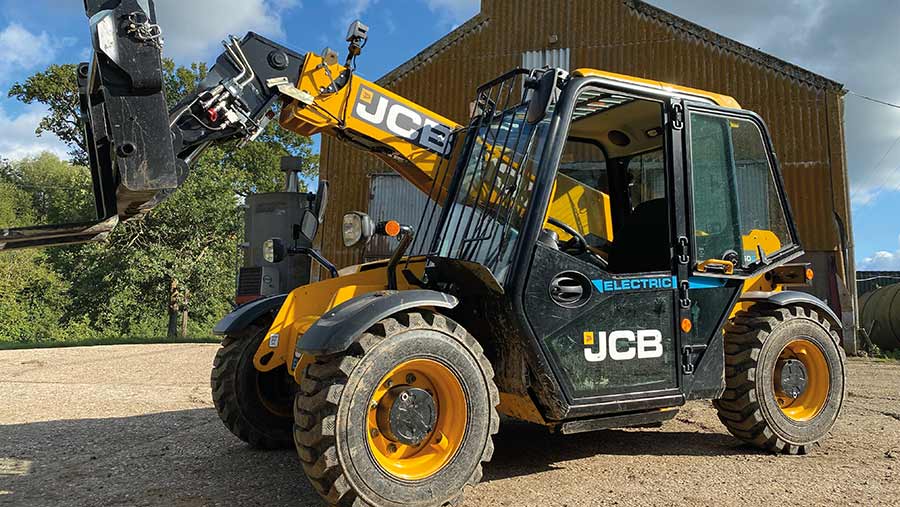 But while those buyers can find several compelling and pressing reasons to ostracise the oil-burner in favour of something greener, the process of weaning agricultural vehicles off fossil fuels will be far slower.

After all, farmers are not at risk of upsetting neighbours or spooking horses by having a diesel engine rumbling at an unearthly hour, nor do they work in enclosed spaces that necessitate the complete elimination of tailpipe emissions.

And though the E-tech Loadall will match its diesel-drinking stablemate in lift and reach, its £23,000 price premium (£87,435 before a radio and any other extras are added) puts it in a category all of its own.

But it does have some perks.

Those of a particularly environmentally sensitive persuasion, and who already produce their own electricity through on-site solar, wind or anaerobic digestion, will be able to slash their running costs.

However, to what extent depends on the working life of the machine, as its production, and that of the batteries, remains energy intensive.

In a practical sense, the 525-60E is probably best suited to dairy farms, where the repetitive routine and relatively short stints of work are bookended by long breaks, allowing ample time throughout the day for the batteries to be replenished.

The cows might appreciate the peace and quiet, too.

Power is provided by a 96V, 24kWh lithium-ion battery pack housed within a 96x64cm box slung between the axles. Both it and the electric motors it feeds are supplied by Jungheinrich, a German firm that specialises in electric forklifts.

The battery is small, even by automotive standards. Believe it or not, it’s actually outgunned by the electric Fiat 500, which carries a 42kWh power pack in its petite frame.

But according to JCB, 24kWh is the sweet spot that balances physical size, cost, range and recharge time.

Official statistics suggest it will soldier through three-and-a-half hours of continuous work, though in practice that seems to be an ambitious target.

We found the gauge sunk by roughly 1% for every 100m travelled, and that’s without lifting and shifting heavy material, running the heater, or turning on the lights – all of which gobble more of that precious, and invariably dwindling, energy supply.

Even the most laid-back of operators will find themselves suffering from a spot of range anxiety as the meter plummets.

Limp mode arrives at 12%, first strangling hydraulic performance and then reducing the drive motor output to try to conserve energy in a bid to make it back to the sanctuary of a plug socket.

At this point, it’s time to dig out your Mars bar and a copy of the Beano, as charging can take a while. 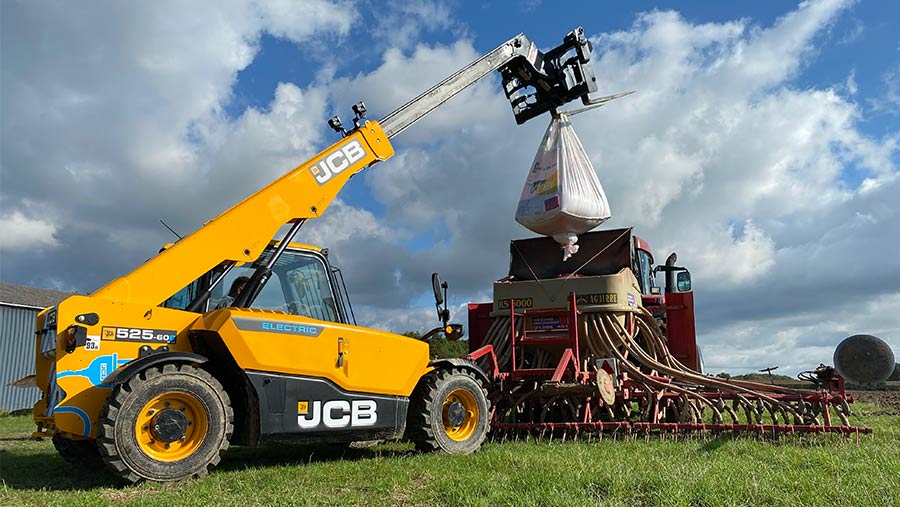 This depends on the farm’s electricity supply.

Hooking up to a 415V three-phase line is the quickest, taking it from flat to full in 110mins or from 20% to 80% in an hour. But bear in mind that this method requires JCB’s Universal Charger kit, which costs another £6,515.

Charging from a 240V (16A) single-phase source is a steadier affair. It takes a full eight hours – effectively an overnight job – though the long-term health of the batteries won’t be affected should impatience lead to unplugging part way through a fill-up.

A full charge costs £3.44, based on an electricity price of 14.37p/kWh, , but it might need five of those to match the runtime of an equivalent diesel, so clawing back the high initial investment is a process that will, at best, take years.

In terms of longevity, JCB reckons the lithium-ion pack is good for a total of 5,000 full charges. Based on two full fill-ups per day, that’s about seven years – after which capacity will have dropped below 80%.

However, it’s possible to replace them outside of Jungheinrich’s 5,000-cycle warranty, and the old ones can be rehomed to cover some of the cost.

And the rest of the driveline?

Motive power comes by way of a 17kW drive motor positioned behind the front axle, which runs through a drop-box and propshafts to all four wheels.

It feels a bit like a hydrostatic, with smooth, seamless – albeit steady – acceleration to a top speed of 15kph.

This pedestrian limit helps conserve power, and pulling off the throttle without braking also allows the electrical system to harvest a modicum of energy that gets sent back into the battery.

It means there is no need for whiplash-inducing braking capacity so, although it uses the same axles as the regular model, the standard wet discs have been replaced by a cruder drum on the back of the drop-box.

On the move, it doesn’t seem much quieter than a diesel, partly because there is no purr (or rattle) of an engine to disguise the noise of the motors and pumps.

The upshot is that there’s nothing but silence, bird song and mooing cows at a standstill, which keeps things pretty civilised. 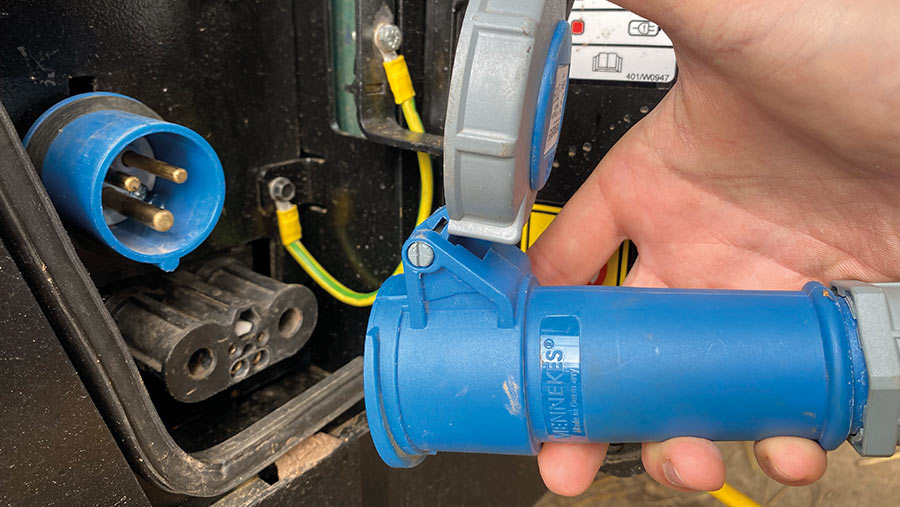 What about the hydraulics?

There is another electric motor – this one rated at 22kW – to power an 80-litre internal gear pump mounted behind the cab and near to the valve block and 44-litre hydraulic tank.

The pump is primed to work whenever the ignition is on so, in theory, the response should be sharp. However, we found it suffered from a second or two of lag between button pushing and boom moving.

JCB says this was a problem with the joystick tuning, which it has since resolved.

Cycle times are a match for the diesel (which employs a pump of the same size, albeit from a different manufacturer), but one of the major perks of electric drive is the immediate provision of full torque.

This means it can comfortably conduct two functions simultaneously.

However, it takes a few minutes to get used to controlling things and, with full hydraulic power always on tap without having an engine revving at full chat, feathering the movements takes a more delicate touch. 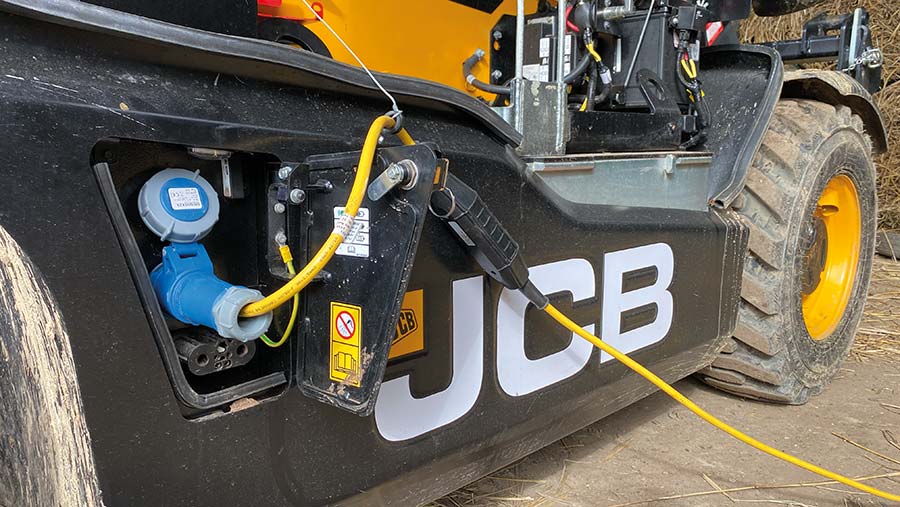 Nope – JCB redesigned the undercarriage to account for the battery pack and motors, which are completely different in shape and size to the jettisoned 74hp Kohler engine and hydrostatic transmission.

The 340kg of batteries take up surprisingly little room, leaving an unexpected void under the bonnet that provides a potentially useful stash spot for ratchets straps, string or a toolbox, as well as the on-board single-phase charging cable.

All in, it weighs 150kg less than the diesel equivalent, at 5.2t, but keeping the batteries central and low has helped maintain the 2.5t lift capacity and 6m reach without the addition of unwieldy counterweights. 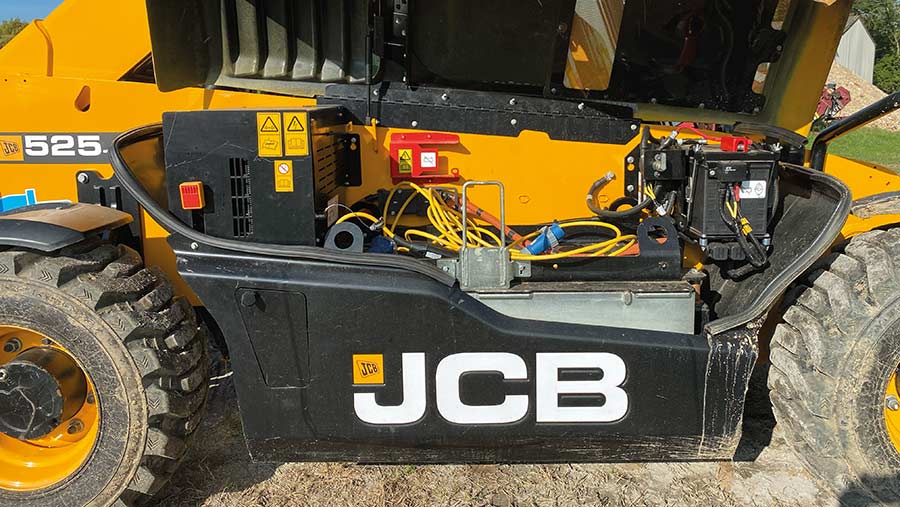 However, it’s part of JCB’s “compact” range and, at just 1.89m tall and 1.84m wide, it looks like a Tonka toy when toe-to-toe with a full-size Loadall.

On the plus side, the climb into the cab is more of a trip hazard than a step, which pensioners with dodgy hips should have no problem negotiating.

The flipside is that its 22cm of ground clearance doesn’t suit rough terrain, nor do the rigid axles or standard 12×16.5 industrial-spec tyres, which can struggle for traction.

Though more aggressively treaded Michelin XMCLs are available on the diesel, they apparently don’t fit the E-tech (without obliterating the turning circle, at least) because the battery pod takes up marginally more space than the engine. In reality, this is a machine designed for a concrete yard.

The low ride height also savages views to the right and, with the boom lifted enough to keep the headstock clear of the ground, there’s little chance of seeing much over the bonnet.

With that in mind, some users may benefit by opting for the Compact Tool Carrier headstock if they don’t already have a supply of Q-Fit-compatible attachments on the farm.

What about the cab?

No change here, aside from the removal of a couple of transmission-related controls on the joystick and the addition of a battery gauge in the screen.

It’s surprisingly spacious, given the Loadall’s modest proportions, and most operators should be able to navigate the controls easily.

Forward and reverse can be selected on the steering column shuttle, or on the joystick. The latter also houses buttons and rollers for the boom and headstock, plus the locking pins and an auxiliary service.

Cab ancillaries, including the LED lights, heater and window wipers, run on a regular 12V system, recharged by a DCDC converter.

Options include a radio, a flashing beacon, and a front screen guard. 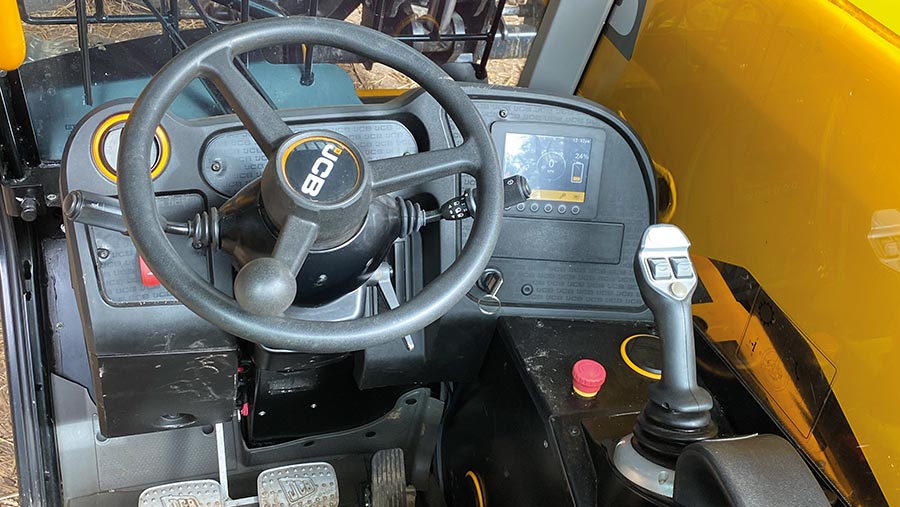 Clearly, it’s not going to be everyone’s cup of tea – the diesel 525-60 is a niche machine in agricultural circles and the electric version will have a narrower audience still.

With that in mind, perhaps it is telling that the brochure features no farm-related images.

However, its faults are mainly an inherent part of battery technology and, in particular, that it simply doesn’t offer the capacity to store the energy required for long, intensive tasks.

This is likely to be a relatively short-term hindrance, with car makers now investing billions of pounds in developing a means of increasing energy density and reducing charge time. Economies of scale mean the cost will come down, too.

But for now, willing buyers must accept the limited range in return for the elimination of tailpipe emissions and quieter operation – both of which have advantages in environments where sound and/or air pollution is an issue.

Similarly, those with their own electricity source may be able to make the sums add up and, in time, grant money could help soften the financial hit.

For everyone else, the argument for the E-tech Loadall is unlikely to stack up – at least while diesel is readily available and reasonably priced. 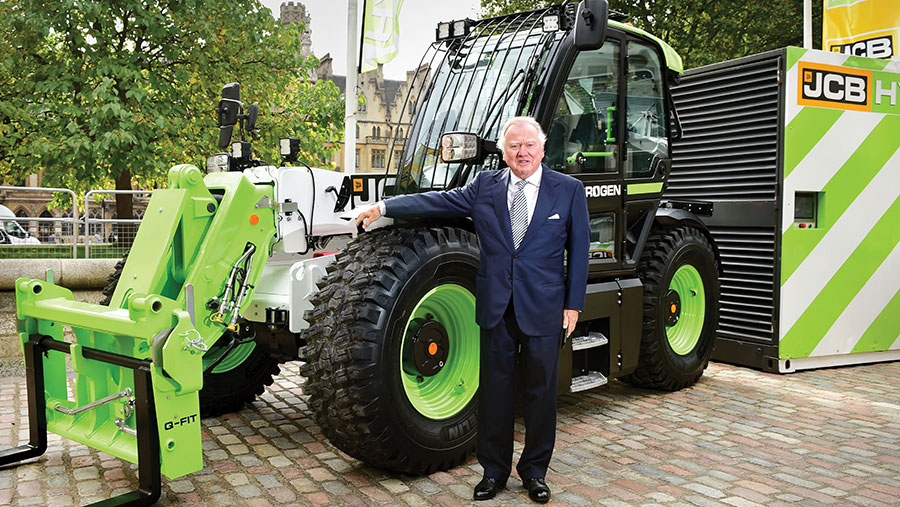 JCB now has a raft of small battery-electric machines, including a mini digger, Teletruck and 1t dumper.

However, the company accepts the technology has its limitations and, as such, has been developing an alternative means of powering its bigger agricultural and industrial equipment.

It now has a working prototype of its hydrogen combustion engine in both a 3CX backhoe and telehandler (pictured), which uses an adapted version of its existing Dieselmax. You can read more about the JCB hydrogen engine here.