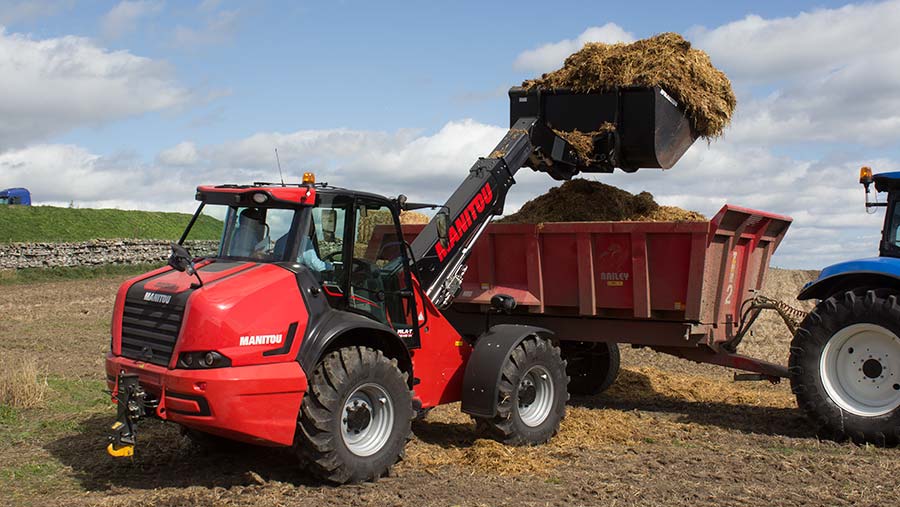 It might have a chequered past in the world of pivot-steer loaders, but Manitou has returned for another crack at a market monopolised by its old enemy, JCB.

However, with global demand for pivot-steer telehandlers a long way behind that of the UK and Ireland, Manitou decided to rein in spending and change tack.

That’s where things turned a little sour – Manitou went cheap and bought the blueprints for a machine from defunct Irish manufacturer Redrock.

It launched the MLA 630 in 2011 and offered it for a couple of years, but it was riddled with problems and was eventually canned. 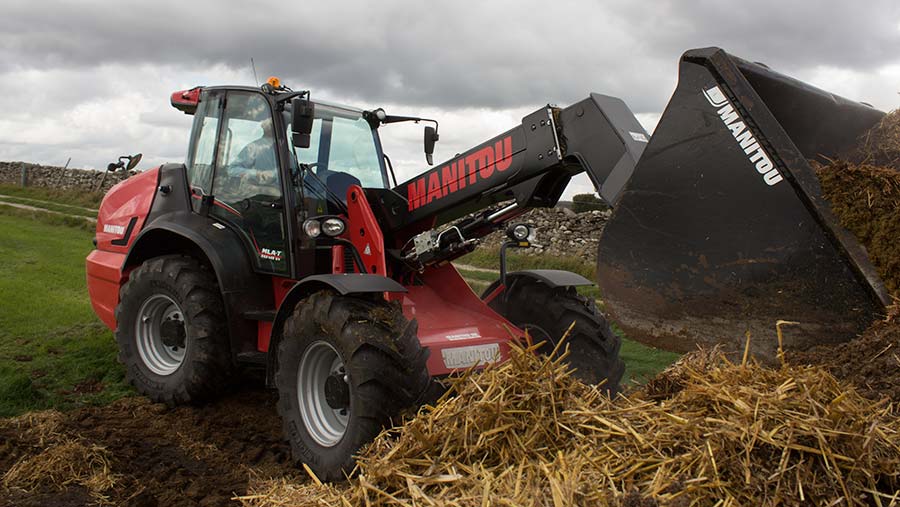 Manitou’s new machine is based roughly on the structure of the popular 628 – but with extensive redesigns – and is being pushed heavily to the livestock farming market.

This time around, it has decided to keep development in-house and the machine received a warm reception at its first public outing at Agritechnica last year.

Manitou has a bit of a reputation for flitting between engine suppliers and this time it has opted for Deutz’s 4.1-litre unit.

This provides 143hp – plenty of poke for the type of work the MLA-T will be doing – and comes with a raft of in-cab settings that allow keen operators to get things working exactly how they want.

One of those is the sometimes-maligned eco mode that can provide pretty appealing cost savings in situations where all-out power isn’t required.

During mixed loader work, for example, it can reduce consumption from 6.2 litres/hour to 5.51 litres/hour (about 12%), says Manitou, which equates to a fuel cost saving of £440 over 1,000 hours at current diesel prices.

Although it’s not just for high-speed road work, the system is able to deliver the top speed (40kph) at 1,900rpm – 400rpm less than usual.

There’s also a hand throttle in the cab that can be used to control engine rpm, leaving the foot pedal to manage forward speed, which is ideal for jobs where constant oil flow is required such as running straw bedders.

Torque converter set-ups might be a mainstay of the pivot-steer market, but Manitou has decided to lurch left-field by offering only its hydrostatic M-Vario Plus transmission, which is more commonly found on higher-spec, rigid-frame machines.

The obvious perk is that it’s super simple to drive, as it has just a throttle and brake with no gears to tamper with.

The way the designers have laid out the system is also quite nifty. The engine runs through a Rexroth-sourced hydrostatic pump which powers two separate axial piston motors.

Both of these are engaged at slow speeds to provide maximum power, which Manitou insists is enough to match any torque converter set-up.

However, above 20kph an electronically controlled clutch pack automatically disengages one of these motors, and it remains inactive until it senses a power demand.

Running only one motor at high speeds reduces oil displacement, lowers the risk of it getting hot and adds a marginal fuel saving, too.

It’s also possible to alter how the throttle pedal behaves. Select standard mode and it remains fairly aggressive and quick to accelerate, while “handling” mode is better suited to precise work. Both still offer max power; it’s more a question of how it is delivered.

There are several other software-based functions traditionally found on bigger tractors, such as a dial for limiting speed when working on a silage clamp and memory functions for forward speed and engine rpm.

Of course, many operators would prefer not to meddle with these features and just have full power whenever they want – it’s fine to just leave them alone, but they’re included even on the most basic model.

Manitou has decided to go heavy-duty with the chassis design – given the savage treatment a lot of machines receive from their owners. With that in mind, it weighs more than 8.4t, about 250kg more than JCB’s TM320S. 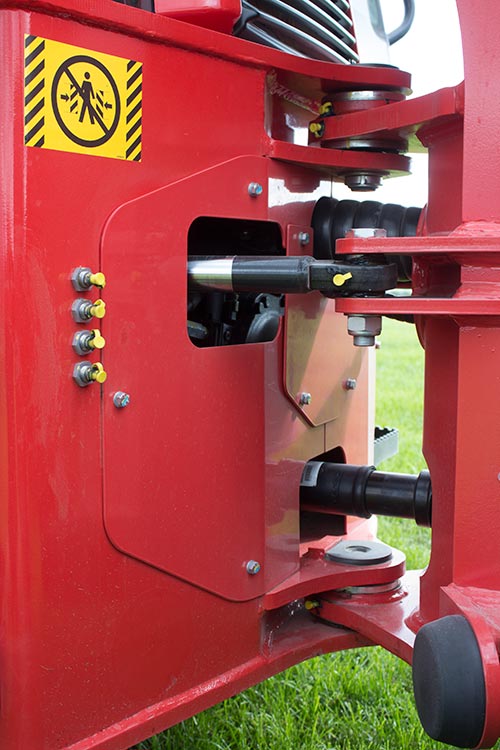 The prop shaft runs inside the chassis and between the pivot points to give it maximum protection even without a belly plate.

That’s important as the ground clearance is 39cm (and far less with a pick-up hitch on the back), which is 8cm lower than the TM. However, the MLA-T is narrower and has a better turning circle, too.

The top and bottom pivot pins are spaced far apart to reduce the strain on them and the pivot doesn’t offer any oscillation, either – instead it’s done on the rear axle, just like a loading shovel.

There’s a central greasing bank (pictured) on the right-hand side of the pivot to encourage regular lubrication of the steering cylinders and rear axle, and Manitou has opted to keep things simple with a manual parking brake that engages the front discs, rather than the prop shaft anchor used on the JCB.

A 158-litre/min load sensing set-up is about typical for this size of machine, but the MLA-T is generally quite a bit slower in the cycle time department than the TM.

The clear exception to that is in boom lowering, where it employs a regenerative system that uses gravity to lower the headstock.

This leaves oil flow spare for other functions to be conducted at the same time, which means overall performance is still pretty good.

Maximum lift at full articulation is 3.3t, but it has the capacity to comfortably lift 5t in some situations and outdoes an equivalent rigid machine at heavy lifting jobs.

We found it very comfortable piling into the bottom of a muck heap, where it’s helped by a pair of 390kg rear counterweights and ladles of tearout force.

The most useful of those is Quick Lift (which extends/retracts the boom as it is lifted/lowered), but there’s also a bucket shaking system and a return-to-position mode useful for clearing out flat-bottomed sheds.

We didn’t have a chance to properly test the last of those, but it is apparently much improved thanks to upgrades on the four-wheel-steer MLT machines.

Other details worth noting include boom suspension – either constant or automatically engaged above 3kph – a function to alter the quantity of oil sent to the double-acting front spool, and Easy Connect, which uses buttons on the front mudguard and in the cab to depressurise hydraulic couplings.

There are also various safety systems that limit hydraulic functions when load limits are exceeded, but there’s also a press and hold system to override them and they are turned off with the boom retracted, or when travelling above 3kph. 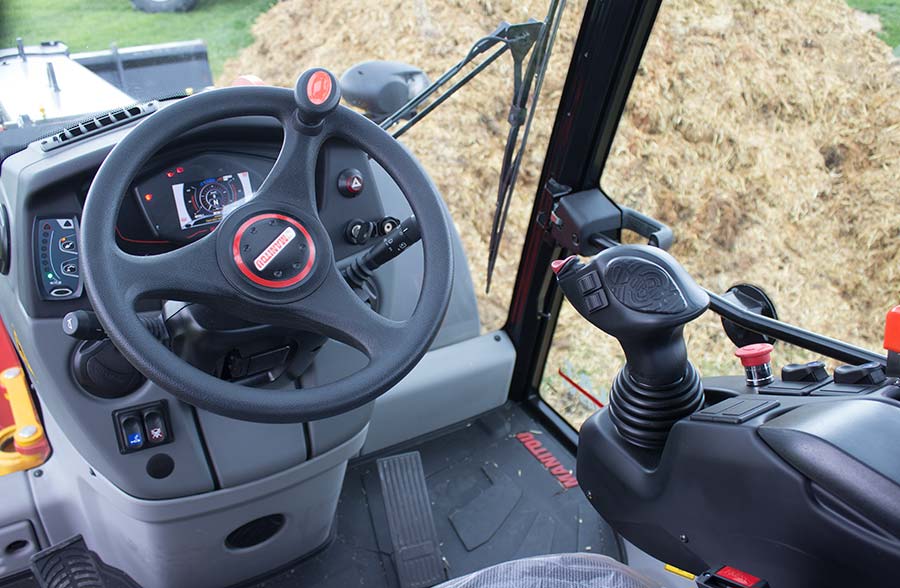 Manitou decided to design a whole new cab, although plenty of its internals will be familiar to MLT owners.

Central to that is the JSM joystick which carries a couple of scroller wheels and the forward/reverse shuttle.

It sits on an adjustable armrest and the side console contains many of the functions mentioned earlier, including the likes of bucket shake and boom suspension.

It’s all pretty easy to use, even for those who get grumpy about missing a left-hand shuttle shifter.

However, most of the information is displayed through a tiny dash screen that will be far too small for anyone with slightly dicky eyesight.

On the plus side, there’s a big air-conditioned storage box that can double as a basic passenger seat and the doors can be pinned back or set ajar to let in wafts of fresh air.

JCB has been devoid of any competition in the 400-units-a-year mid-sized pivot market for several years, so Manitou will have its work cut out finding a way back in.

But things look promising and the MLA-T seems to have most of the ingredients to make some headway, including fairly abundant power and a slick transmission.

It’s a shame that it doesn’t have the same big, high-tech display as the new MLT rigid frame machines – the dash screen is simply too small to be useable – but most diehard pivot operators should still find it easy to drive and a comfortable place to work.

There’s no word yet on whether Manitou intends to bulk out its range to provide further competition to JCB’s heavier-lifting TM420.