The appearance of an electrically powered, full-size telescopic handler for the first time is one of the highlights of the 2021 Ultimate Guide to telehandlers.

JCB’s 6m, 2.5t-lift Loadall 525-60E Agri with its 24kW/hour lithium-ion battery pack emits zero emissions, is near silent in use and can be juiced up with a portable charging unit as well as from fixed charging installations.

As an “eco” option that particularly suits indoor operations, the electric Loadall joins Avant’s 2.79m, 1.35t e5 and e6 mini tele loaders and the new EZ 7 and EZ 8 machines from Italian manufacturer MultiOne, which have 16.5kW/hour and 20.5kW/hour batteries, respectively, a lift height of 2.9m, and max lift figures of 1.44t and 1.24t.

See also: Ultimate guide to buying a round baler 2021 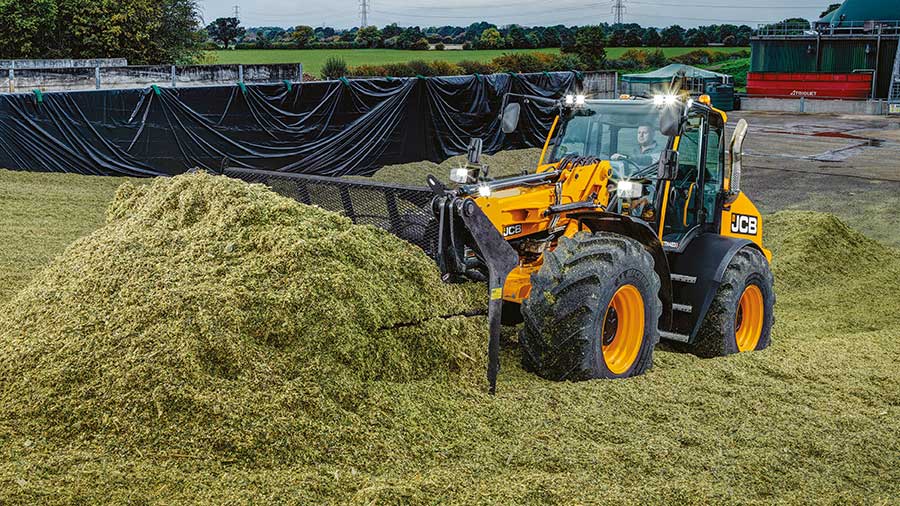 As for the rest of the guide, JCB has the largest number of updates this year as a result of the diesel Loadall line-up going to Stage 5 emissions standards and new TM telescopic wheeled loaders being introduced.

These include the flagship TM420S with a 173hp JCB engine, eight-speed powershift transmission, and a new high-visibility cab shared with the TM420, TM320 and TM320S.

Stage 5 versions of the third-generation JCB Loadall see the two most powerful engine options uprated to 130hp and 150hp with some improvement in torque.

Engine idling auto shut-down added to these and the 109hp unit.

The 6.2m, 3.2t lift Loadall 532-60 is now available with the DualTech VT hydro-powershift transmission, which can also be had with additional spec levels on other models in the range.

Claas enters the market for telescopic wheeled loaders for the first time with the new Torion 738T Sinus, which in addition to providing 4.96m and 3.8t (2.3t to full height) lift credentials, has the unusual feature of combining rear-axle steering with an articulated chassis.

A 73hp Yanmar engine, two-range hydrostatic drive and a choice of single or dual pump hydraulics are also part of the Liebherr-built package.

Telescopic wheeled loaders built in China make their debut in the guide; they are branded and imported by J Mac, a company near Birmingham that also brings in mini diggers, excavators and a backhoe-loader from Turkey.

The loaders comprise a trio of articulated-chassis models with lift capacities from 1-2.5t and up to 4.2m maximum height, with power from a Xinchai diesel that, in the top model, can be swapped for a Cummins, Kohler or Yanmar.

There is also the JMT1500 compact 4m, 1.5t-lift side-boom telehandler with rear-wheel steering on a rigid chassis.

Elsewhere among the tele-loader entries, Dieci has dropped the smallest Agri Pivot from its line-up – the 4.3m, 2t-lift T40 – but retains the other four models that culminate in the 6m, 5.7t T90 Plus with 152hp FPT motivation.

Schaffer, meanwhile, has a new entry-level machine in the 2630 T SLT, powered by a 25hp Kubota diesel and using its 38-litre/min gear pump hydraulics to lift just over a tonne to 3.72m or a maximum load of 1.6t.

Both machines can be had with Classic, Premium, Elite and Platinum equipment levels and introduce Yanmar engines to the Manitou range, with 141hp peak output, coupled to a five-speed powershift transmission.

At the same time, the hydrostatic drive MLT 630-115 VCP and MLT 630-115 V with 3t lift to 6m and 6.1m, respectively, along with the four-speed powershift version of the latter, get a modest boost to 116hp for their latest Deutz engines. 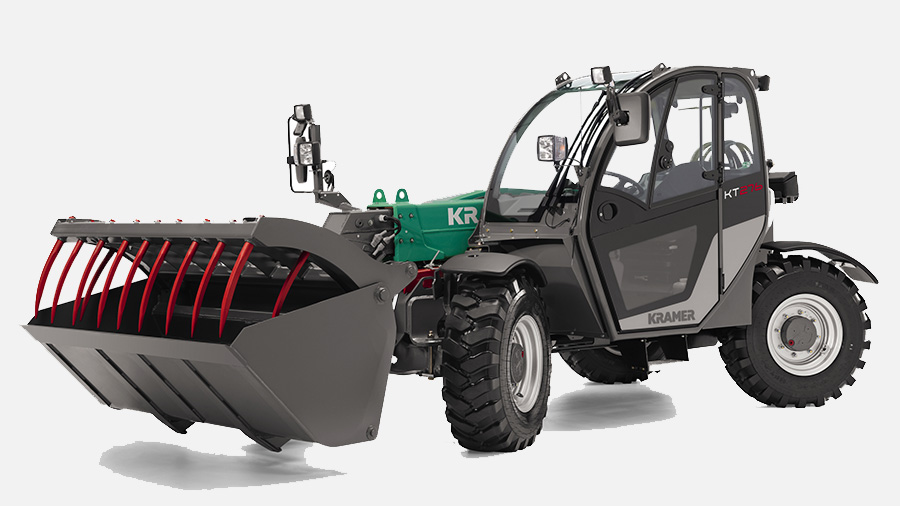 Kramer’s KT telescopic handlers have all switched to Stage 5 engine specs, which adds a diesel particulate filter (DPF) to the diesel oxidation catalytic converter (DOC) and SCR ammonia solution mixing system on the 3.6-litre Deutz engines, and just a DOC and DPF for the 75hp Kohler diesel in the compact KT276. 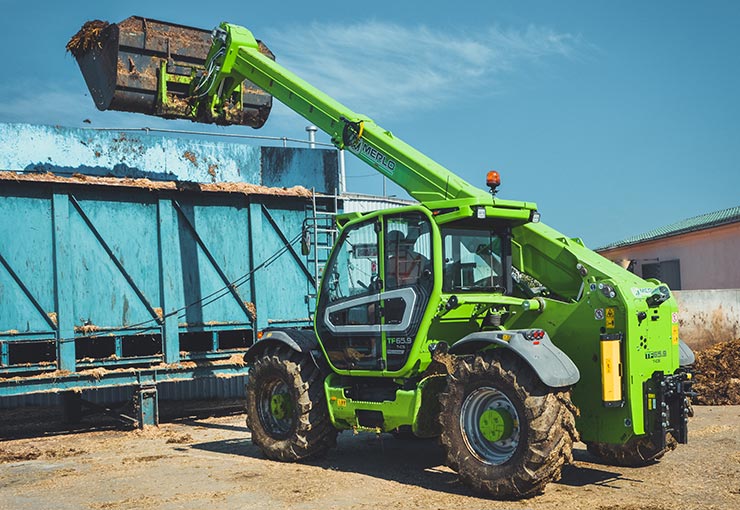 The TurboFarmer TF65.9 has come into the Merlo range as a new heavy lifter capable of taking its 6.5t maximum capacity to the full height of 8.8m, and with a choice of two-range hydrostatic and twin motor CVT transmissions, both coupled to a 170hp FPT 4.5-litre diesel.

These feature the TT levelling and side-shift front axle, with either two-range hydro or twin hydraulic motor CVT drives.

This includes an armrest-mounted joystick, extra lighting, heated seat, auto-steering alignment and other extras in addition to the Classic and Plus packages. 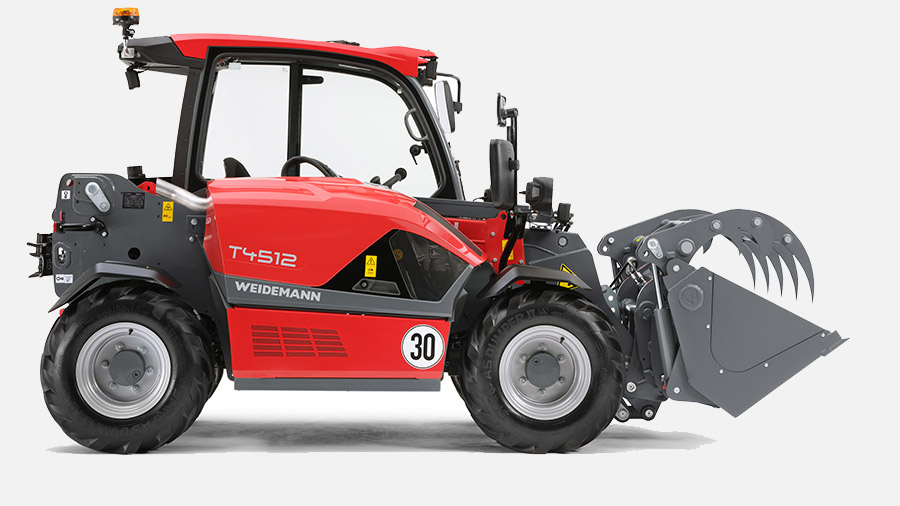 Weidemann’s 5.5m, 2.2t T5522 with Perkins 49hp has been dropped from the UK range in favour of a more powerful 61hp version, while the latest-spec T4512 with esDrive two-range hydrostatic transmission comes in.