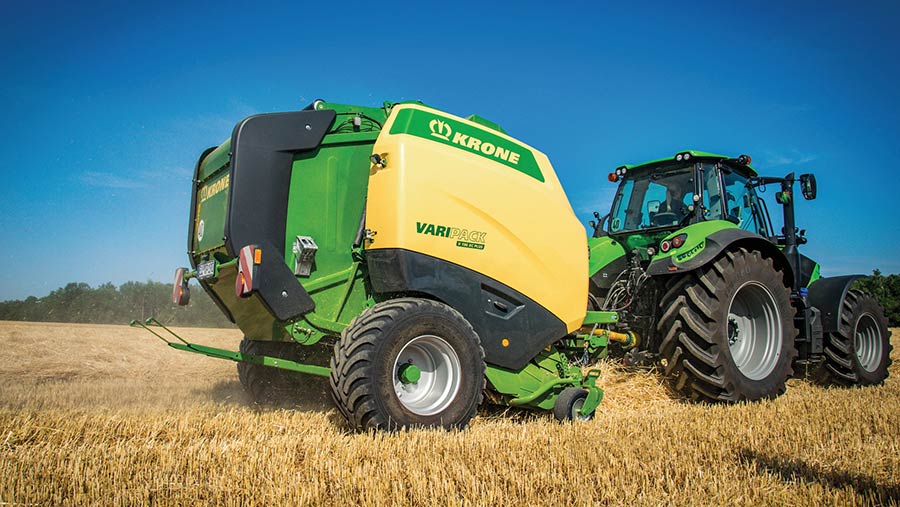 With Isobus electronics becoming increasingly popular for its common display format across different types of machines, this year’s Ultimate Guide to round balers highlights the machines on which this added-value feature is available.

The table also notes whether Isobus functionality is installed as standard or as an extra-cost option, and the footnotes lists whether any automated functions are available.

These commonly include auto-tailgate opening once netting has been completed and, in some case, tailgate closing, too.

The new Isobus TIM (tractor implement management) feature also makes its debut on selected John Deere and Krone machines, whereby the tractor and baler are automatically brought to a halt once a full-size bale has been formed.

That function could be extended to starting off again in future, once legislation allows.

In terms of changes to manufacturer ranges, Krone’s new Varipack and Varipack Plus balers are listed for the first time.

They produce bales of 0.8m to 1.65m or 1.9m diameter using a combination of three rollers and four belts, in contrast to the rollers, belts and slats mechanism of the Comprima models.

Another departure is an inline feed-in mechanism – instead of separate short-side augers and a multi-tine feed rotor, these elements are combined in one structure, as on John Deere and Kuhn machines, which simplifies the driveline.

At the cam-free 2.15m-wide pick-up, the tines are arranged in five straight rows on base Varipack models, but in a W-formation on the heavier-duty Varipack Plus, which also come with a 26-knife crop-cutting system, auto tailage lift/lower as standard, and larger standard and optional tyres.

Base machines can have a plain intake rotor or one with 17 knives, and in both cases the number of knives deployed can be varied to suit end-user requirements or to keep a sharp set in reserve.

Kuhn has added the VB 7100-series heavy-duty balers to its UK line-up, offering bale sizes from 0.8m to 1.6m or 1.85m diameter and increased output and bale weight potential with tractors of at least 120hp and 130hp, respectively.

Adjustments to the new iDense control system are made automatically based on moisture content of the incoming material, and a rapid chamber opening and closing sequence aims to help the machines achieve maximum output.

The Kuhn VB 7160 and VB 7190 have a conventional cam-controlled pick-up with five rows of tines working in combination with a 217mm-diameter crop press roller to transfer material to the intake rotor. 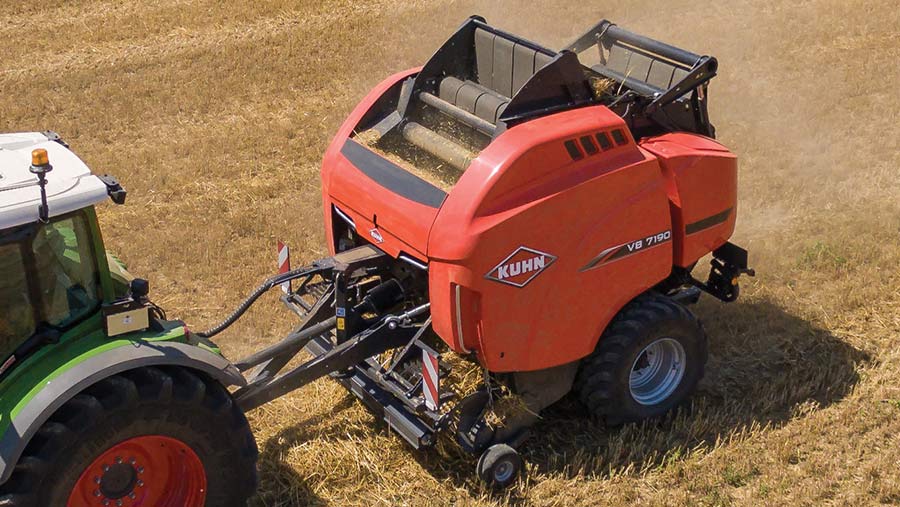 In the bale-forming chamber, a base roller supports the developing bale, while two slightly smaller-diameter rollers above the entry throat are designed to get material of any type rolling into a cylindrical shape.

A twin arm density control mechanism translates the iDense system’s instructions into mechanical effect and is said to be capable of densities of up to 140kg/sq m in straw, while up to 30t/hour is claimed for the balers’ output potential.

McHale has replaced the V660 variable bale-size machines with the non-chopping V6740 and the 15-knife V6750 round baler, which is available with an optional knife selection mechanism.

Both come with an intake rotor fed by a choice of 2.1m-wide pick-up reels – a cam-operated design with five rows of tines or a cam-free six-row version for clean swath collection at faster working speeds.

A moveable plastic panel at the centre of the intake, just ahead of the rotor, adjusts vertically to help maintain a consistent flow of material from slim and thick swaths alike. 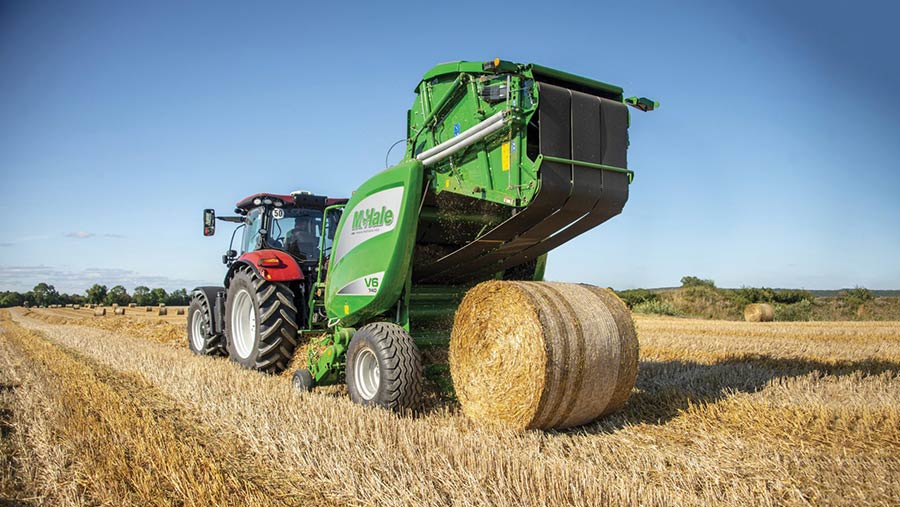 The balers retain the same working principle as their predecessors in that bale formation is performed principally by belt, but with one supporting roller and two rollers above the intake to help with initial rotation.

Unusually, both machines can be fitted with one full-width belt – as on the Fusion Vario baler-wrapper – as an alternative to three individual belts.

The only change amongst the fixed chamber-size roller balers is Vicon’s introduction of the FixBale 500 as a replacement for the RF 4325.

Designed for heavy silage conditions, this machine has rollers and driveline components developed for the FastBale Non-Stop baler-wrapper.

An additional steel roller takes the total complement to 18, with two in the base of the chamber to support weighty bales.

The revised pick-up reel is 10cm wider at 2.3m, the five tine bars are guided by cam tracks at both ends, with each bar supported by four bearings, and the tines are 10mm longer than before.

They feed a larger-diameter intake rotor fitted as standard with a 15-knife crop-slicing set-up, and anti-plugging measures include a curved drop floor that opens with a parallel action to increase clearance at the front, as well as the rear.