Earlier this year, JCB launched a new hybrid transmission that promised to bridge the gap between the structured steps of a torque convertor gearbox and the seamless ratios offered by a hydrostatic.

The Dual Tech VT offers the best of both worlds, with smeary hydrostatic acceleration for first gear yard work and a further three powershift steps for life on the road.

In contrast, Dieci has stuck with the well-established hydrostatic formula, but has added extra sophistication by fitting a second swash plate motor that can be disengaged when the workload is light.

Apparently, this transmission redesign can trim diesel use by as much as 20%, though these bold claims can only come close to being realised if the driver takes responsibility for shifting between drive modes.

To get to the bottom of each machine’s merits, we set to work shifting 200t of well-rotted muck ready for spreading with a Terragator.

How does Dieci’s gearbox work?

The key difference with this system is the addition of a second drive motor that can be engaged and disengaged as required.

For high-torque applications like launching into muck piles and silage clamps, the pump swings wide open to send maximum oil flow to both motors.

When high speed is required and torque requirements are low, oil is shut off to the second motor and the pump backs off a bit.

For the driver, the reward is a sizeable fuel saving, provided the appropriate one of four drive modes is selected. 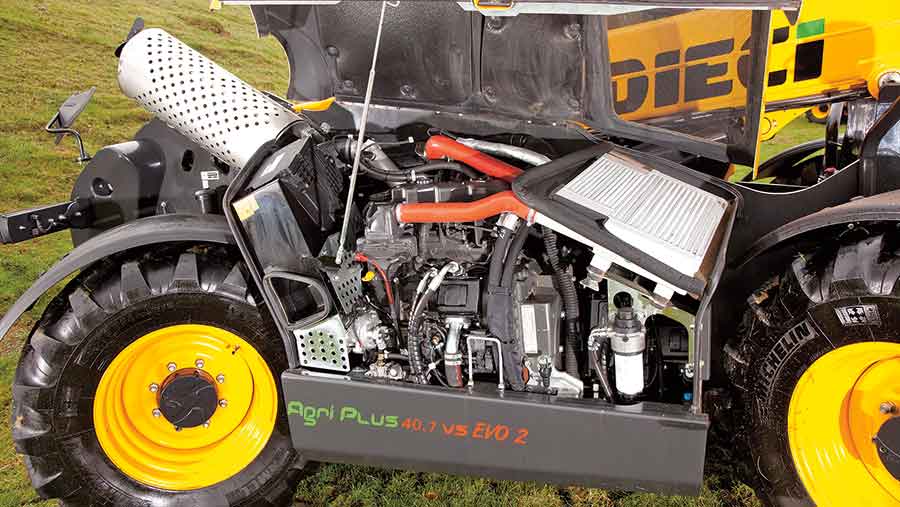 “Normal” – runs up to 40kph with full pulling power and is best suited to towing duties.

“Eco” – 40kph is still possible but once it gets there, one motor will cut out.

“Loader” – the speed range is limited to 0-18kph with both motors engaged for maximum pushing power.

“Creeper” – engine revs and forward speed are set on two separate dials. The driver’s right boot then sets the pace while oil-flow to auxiliary services is kept to the max – ideal for flinging out bedding or feed.

Gear one is replaced by an electronically controlled Bosch-Rexroth pump and motor set that provides hydrostatic drive up to 19kph.

Above this, gears two, three and four are standard powershift ratios of the sort you might expect to find in a tractor gearbox.

Multi-plate clutch-packs engage each gear as required, so the set-up has no torque-converter.

It means when the Loadall is travelling at speeds above 19kph, there is a direct mechanical link between the engine and axles. 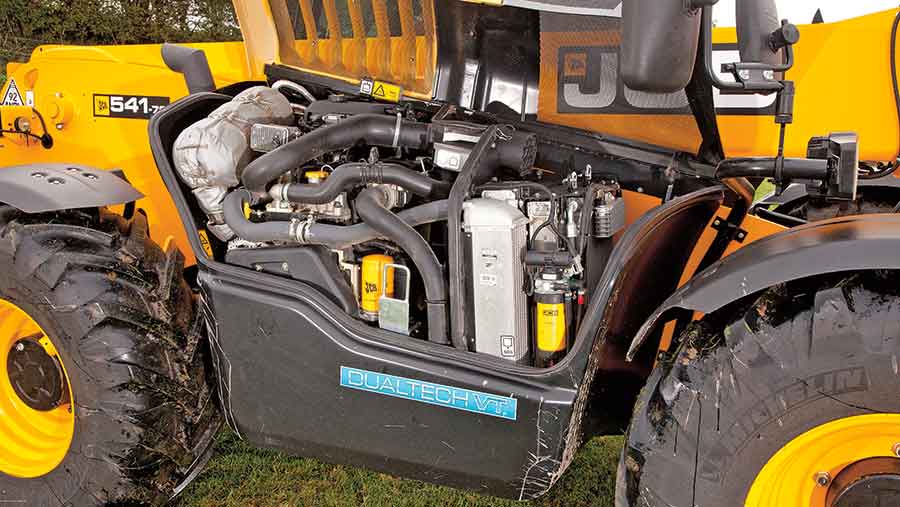 To drive, it feels much like any other hydrostatic machine in the yard and as you get out onto the open road, the automatic shift into the mechanical side of the box is barely noticeable.

Icons appear on the dash to denote how far up the ratios it will travel. A snail denotes slow-speed hydro, while “2” means it will just engage the first powershift step, taking it up to 23kph.

In “Flexi” (snail icon) mode, engine rpm and ground speed can be controlled independently. A toggle switch acts as an electronic hand throttle and a dial adjusts travel speed from 0-19kph steplessly, shown as a percentage on the colour dash display.

This function allows operators to set engine speed for hydraulic performance tailored to a particular operation while the handler’s ground speed can be regulated simply by the foot pedal, doing away with the need to de-clutch and rev up the engine to get oil-flow to the boom. 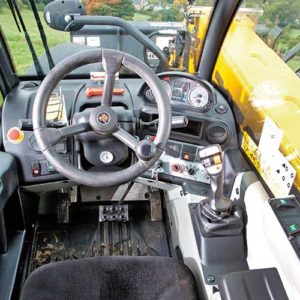 Within both driving modes, a simple rocker switch toggles between “Power” and “Economy” settings.

How do the cabs compare?

Dieci follows Manitou’s lead by opting for a big, single door with an electric window.

It offers wide cab access and should save smashing doors on shed RSJs, but it’s also heavy and can require a couple of attempts to shut.

The upshot of the curved cab frame is a swooping windscreen with a wraparound wiper that provides a good view to the headstock while stacking bales or loading trailers.

The protective roof rails are also fitted on the inside, which makes the window easier to keep clean. 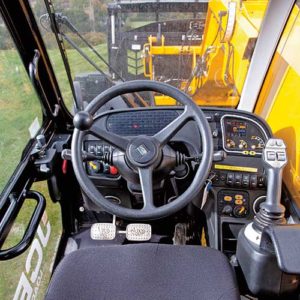 JCB sticks with the traditional split-body access as part of its boxier cab frame, but it means the cross-member falls directly in the driver’s line of sight for lifting and loading work.

On the plus side, there’s a heated side windscreen that could prove handy during winter months, and all-round visibility is better than the Dieci.

Much of that is the result of the Italian carrying a big, clumsy exhaust housing the catalyst to deal with engine smuts, with the stainless steel cowling completely blocking the view to the offside rear wheel.

The JCB’s smooth ride barely caused the driver to flinch, even when hitting a pothole at full bore. By comparison, the Dieci was rough, bouncy and uncomfortable.

We struggled to put our finger on exactly why there was such a disparity in ride comfort, but the fact that Dieci builds its booms out of particularly flexible spring steel might play a part.

It comes with a noticeable amount of sideways movement, so much so that the company fits guides welded to the chassis to reduce the strain on the rear pivot.

On the muck heap

Dieci says one of its big selling points is the range of travel for the attachment crowd/dump.

By minimising the shaking required to shift material, it apparently extends the life of the hydraulic hoses that feed oil to the headstock. 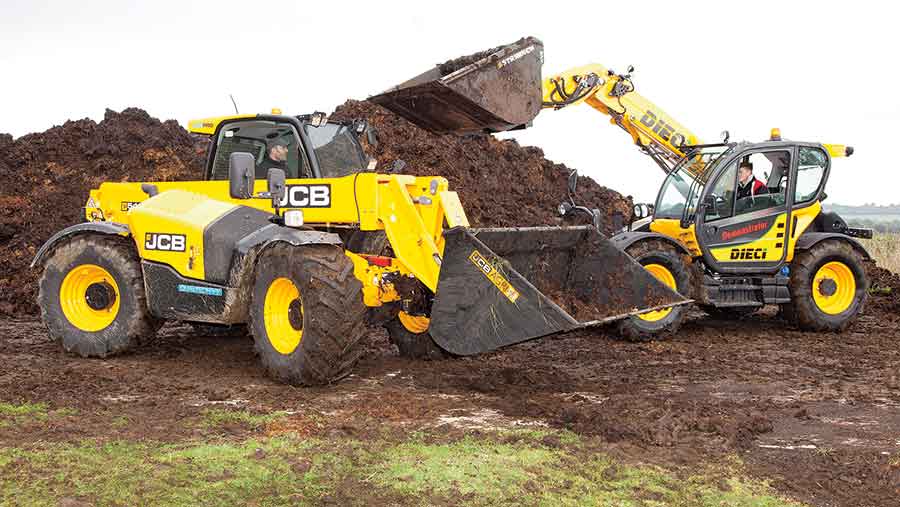 However, in reality the rotted muck still clung to the inside of the bucket and it took just as much vigorous bucket juddering as the JCB, which comes with its own button-activated bucket shaking system.

It sounds like a bit of a gimmick, but is actually a really useful feature, getting more energetic as you lean the joystick further left or right.

In the hydraulics department, the Dieci seemed to have the edge for tearing out chunks of muck and a new drop valve speeds up the process of getting the bucket down to the deck.

In comparison, the JCB’s hydraulics are more sensitive and the joystick offers slightly less precise control.

One of the quickest ways to load a spreader is to set engine revs on the dial to 1,500rpm, which keeps the hydraulics responsive and leaves the foot pedal to deal with speed.

The result wasn’t quite as clear cut as we expected. Though the JCB’s transmission switches seamlessly from hydrostatic to powershift and through the three ratios, Dieci’s set-up offers equally serene travel.

The Italian telehandler also seemed to have the edge in breakout force and the delicate, well-proportioned control from the joystick seemed a more balanced affair than the all-or-nothing set-up in the JCB.

The difference comes in the comfort of the ride. The Brit machine glides over potholes where the Dieci bounces and crashes its way along farm tracks that, aside from losing your fillings, is uncomfortable enough to be a deal-breaker.