Since Claas introduced its Kramer-built telehandlers in 2005, the Scorpion range has established itself as a genuine contender to the might of JCB and Manitou.

However, back in 2015 both companies announced that the long-standing manufacturing agreement was to end.

That decision was followed swiftly by the news that construction giant Liebherr was to take on the building job for the white-and-green machines, leaving Kramer to go it alone in the 3,500-units-a-year UK market.

The company’s rigid-frame loaders have only been available in the Fendt-like green livery since the start of June, but with a growing rank of dealers – including Doubledays, Redlynch and Tallis Amos – taking on the selling job, it’s likely we will be seeing a lot more of them in the coming years.

The new range will feature nine handlers – from the smallest KT276 offering a 2.7t lift, up to the biggest KT559 with the muscle to hoist 5.5t to 9m.

We took the mid-ranking KT357 for a whirl shifting a winter’s worth of cow shed muck.

Most of the spec details will make familiar reading for anyone with Claas Scorpion experience.

It will muster 136hp and offers a butter-smooth delivery of grunt to all four wheels. It’s worth mentioning that the bigger hitters in the range come with 156hp together with weight and reach advantages, so will be a better option for AD plants and high-capacity grain stores. 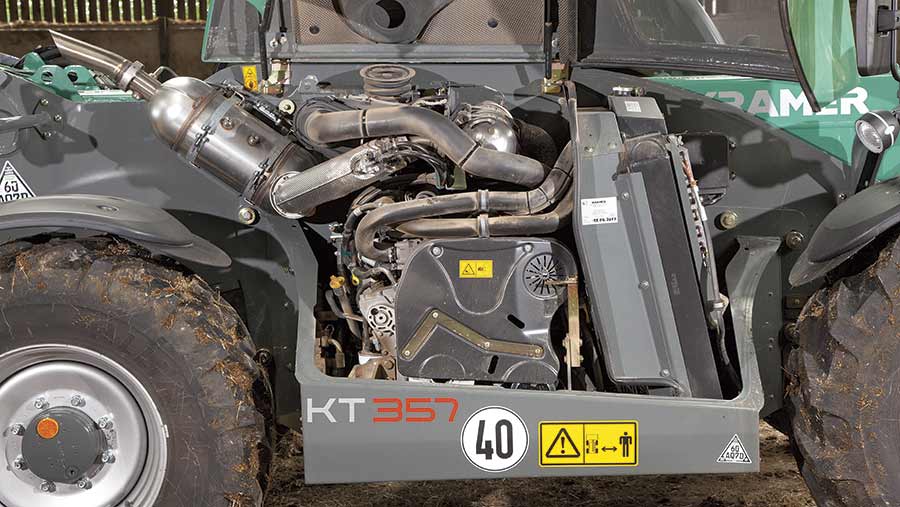 One perk of the design is the tightly sealed underbelly, which minimises the down draught from the engine. That’s particularly handy when stacking straw in sheds, where otherwise the machine would be engulfed in plumes of dust. There’s also the option of a reversible fan if you’re likely to be doing a lot of that type of work.

However, views over the engine hood are limited and it’s hard to get a good look at the rear wheel, which makes getting cosy with shed walls a sweat-inducing process.

Nice-to-have features include a handy central greasing point located near the back wheel, which means you don’t have to lie under the boom to get at the main grease points or scramble on the floor to get at the rear axle nipples.

There are also stacks of extra light and mirror options, including one for the pick-up hitch when hooking up trailers in the dark. The hitch itself is an option and costs the fat end of £4,000, but that package does include trailer braking, a rear mirror and an extra spool for tipping, too.

The 140-litres/min load-sensing axial piston pump seems fairly well matched to the telehandler’s size and it rarely felt short-changed in the hydraulic department – the only time it did feel laboured was when extending the boom to push up a heap of tipped muck.

Our machine was fitted with a button to dump the hydraulic pressure when connecting an attachment. It’s handy – particularly if you’re regularly swapping between items that use the third service – but comes as a £365 extra.

Also on the options list is a scraper that sits around the mouth of the boom extension to stop dirt working its way inside. At only £131 it looks tempting, but the small add-ons slowly begin to crank up the total asking price.

Kramer has developed two assist functions selected on a three-way rocker that are standard on all machines and basically double up hydraulic functions to speed up jobs such as loading grain lorries.

Bucket mode is built for mucking out – it retracts the boom as the headstock is lowered, which is one less thing to think about while reversing away from a lorry or trailer. It takes a few cycles to get into the swing of things, but once you’re settled, it will become a must-use.

The other mode is designed for shifting pallets – it extends the boom as the headstock is raised, meaning the forks rise smoothly in a vertical line. 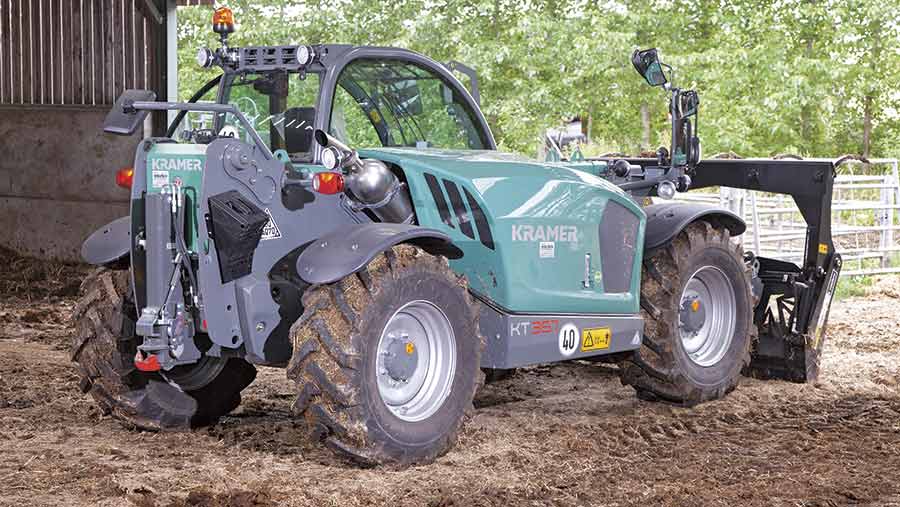 Those who prefer to take control of everything themselves can stick in manual mode, too.

There is also a bucket position memory, which records the angle of the headstock on the deck (but not the height). Once the return-to-work button is tapped, the attachment returns to the pre-set angle and leaves the driver to control boom height.

Claas users will be instantly familiar with the layout of the joystick.

However, if your more au fait with a JCB machine, it can take a few minutes to get used to the Kramer’s forward and reverse shuttle being in the same position as the Yellow Peril’s boom extension. 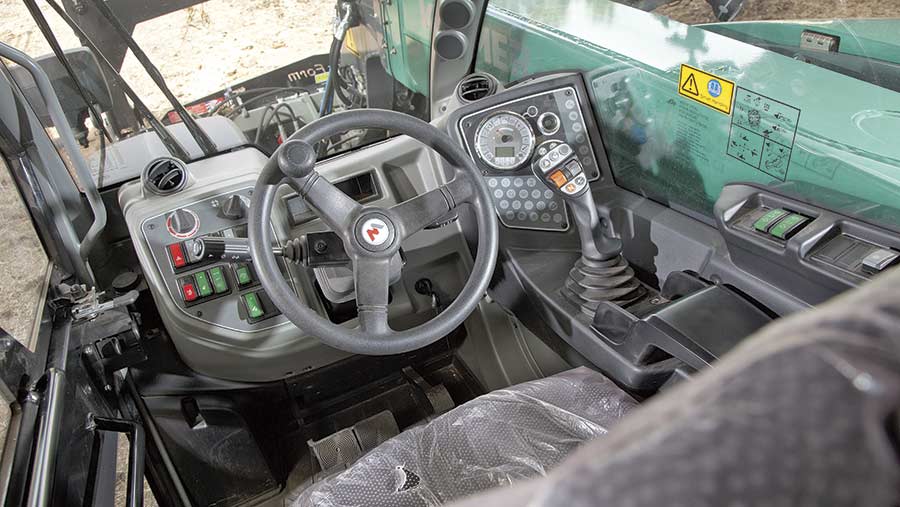 There’s no forward/reverse stick either, so if you’re not used to joystick controls, the indicators will get a regular workout. Instead, they’re on a rocker for forward reverse and a separate button for neutral.

It’s worth noting that on all models above the KT357 the joystick attaches to the seat armrest rather than being mounted on the side console, which is far more comfortable arrangement when blatting across stubble fields to pick up bales.

Elsewhere in the cab, the low, cut-away dash offers sound forward views and the curving screen loops up and over the driver’s head to maintain a clear line of sight to the top of the lift arc.

Interior space is fine, though there isn’t room for a dog bigger than a Jack Russell, and behind the seat is a decent-sized, air-conditioned storage box that can easily fit a lunchbox and a drink to avoid microwaved sandwiches and boiled squash in mid-harvest heat.

It’s simple to use, neatly sized and has plenty of power.

The view to the rear quarter isn’t great, but can be improved with some strategically placed mirrors. A good chunk of potential buyers will also be disappointed to hear that there’s no left-hand shuttle option.

If cash isn’t a limiting factor, we would probably pick the KT447 instead, which brings more lifting power, a bigger fuel tank, electric handbrake and the more comfortable joystick arrangement.

On the subject of money, the machine we tested was a top speccer with an £82,500 price tag. That puts it fully in JCB territory, but we reckon you’ll be surprised by what the Kramer has to offer, even if you have to tick a few boxes on the options sheet.

Special thanks to Redlynch Machinery for loaning us the test machine.