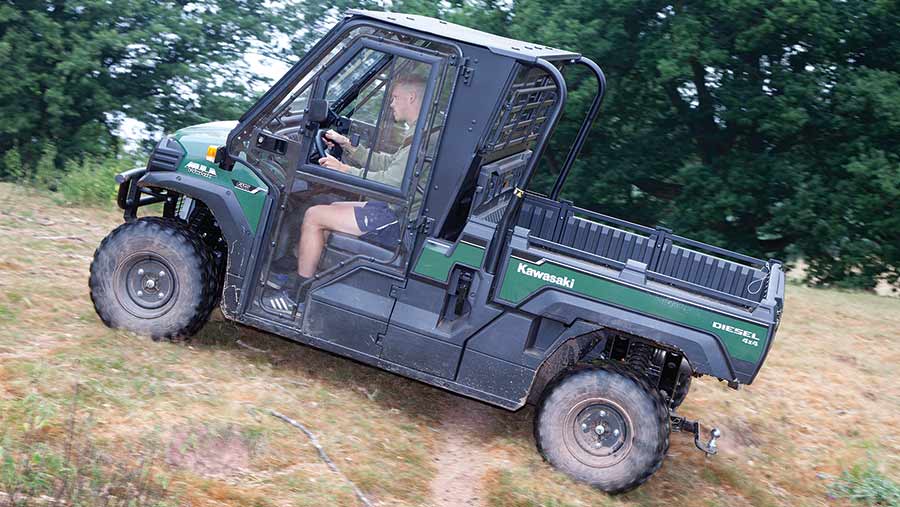 The Kawasaki Mule Pro-DX might be the grandfather of the buggy world, but like most ageing pensioners it moves with little grace and doesn’t go anywhere in a hurry.

What the Mule lacks in performance and handling it does make up for in terms of build quality and practicality, with the largest load bed on test and a spacious cabin with roomy bench seat. It’s also a lot cheaper than a Gator.

Worst for: Getting somewhere in a hurry

Like most diesel-burning ATVs, the Mule is fitted with a three-cylinder Yanmar engine that develops a widow-making 24hp.

It’s a similar unit to the one slotted in John Deere’s Gator, but it has a slightly higher capacity of 993cc and a smidge more horsepower. Sadly, that extra oomph doesn’t translate into extra performance and the Mule was the more sluggish of the two by some margin.

That could be something to do with the fact that it is 54kg heavier, but we suspect the transmission is a little more power-hungry too – even though it’s the same belt-type CVT with high and low range.

When cruising around on flattish ground the lack of go wasn’t a problem, but when we started adding weight and poking its nose uphill, things started to go awry.

During our mile-log uphill slog with a trailer in tow the Mule came in a resounding last place, with a depressingly slow time of 4m 12s. And it was back of the pack for the steep uphill climb off-road, too.

However, even though it was on its knees, it kept plugging away and we didn’t have any refusals.

As for the engine-braking test, it didn’t sparkle there either. Like the Gator you have to apply a little throttle to engage the drive, but it still gathered pace pretty rapidly unless we dabbed the brakes with our left foot.

Things looked up for the Mule when we turned our attention to its large, utilitarian cabin.

There is a sizable bench seat that can comfortably accommodate three adult passengers and a flat floor that makes it easy to slide in and out. Technically, only two passengers are permitted to use it in the UK, but there are mounting points for a third seatbelt should you choose to fit one.

Unlike the unpleasantly cramped Gator, drivers get a decent amount of legroom, an adjustable steering wheel and a waft of fresh air from the built-in air vents. Speccing the full cab also means you get a heater, which is a pricey add-on for some other makers.

Storage wasn’t the best in the test group, but there are several useful stowage areas and the option of adding a large box under the seat. However, at about £100, this is an overly pricey extra.

Kawasaki doesn’t offer its own cab enclosure, so our machine came with a retrofit unit built by DFK. It’s a tad crude when compared with some of the competitors’ purpose-built offerings, with an unpleasant rattle (particularly at tick-over) and poor rear visibility. It’s unfair to compare the noise to Gator though as this didn’t come with an enclosed cab. 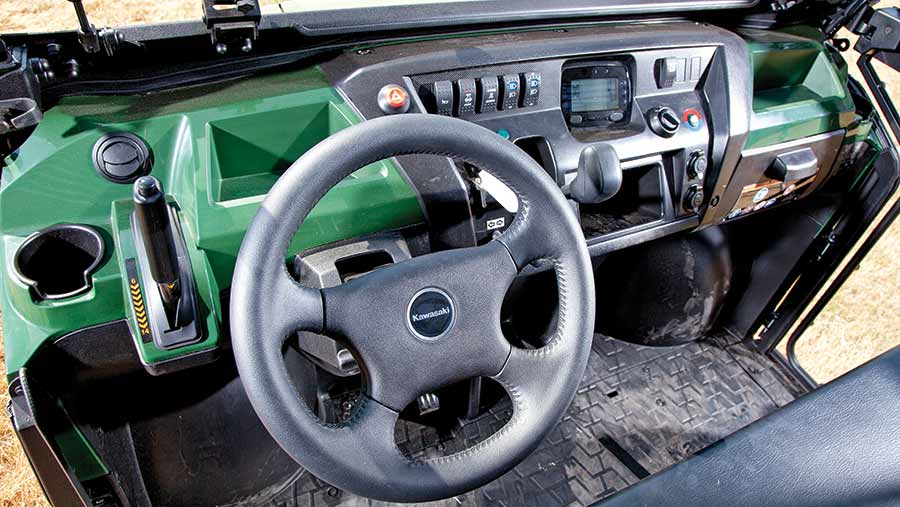 For those who want to lug bulky materials around, the Mule’s massive tipping bed is in a league of its own. It will comfortably accommodate a 4ft round bale and is ideal for carting around fencing materials.

However, buyers need to be wary of the fact that this additional space doesn’t mean you can add additional weight.

In fact, the 453kg maximum payload is actually slightly lower than some of the other machines on test, and although Kawasaki offers a heavy-duty spring option, this doesn’t increase the on-paper payload.

As good as the load bed might be, it can’t disguise some of the buggy’s other shortcomings. These include a huge turning circle that makes it cumbersome in tight spaces, fairly poor engine braking and that all-important lack of power. 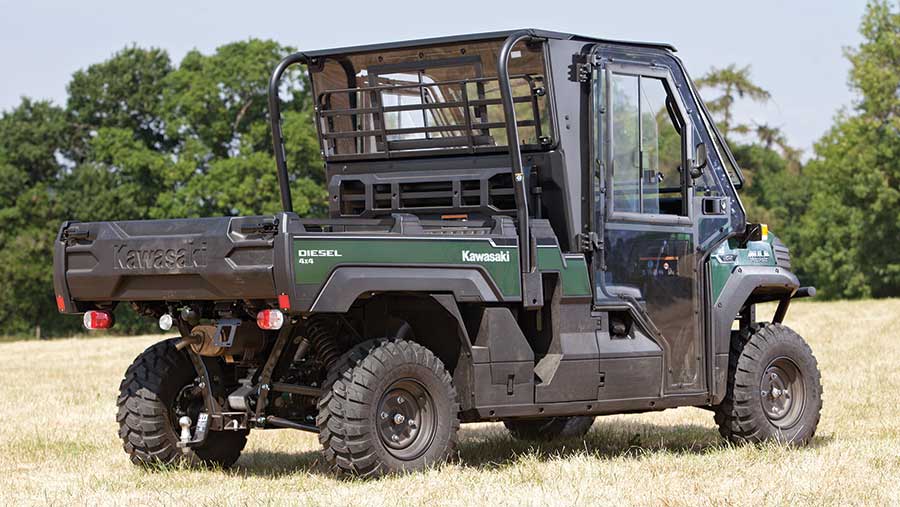