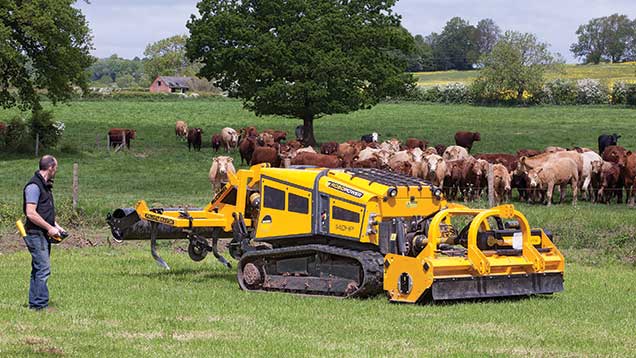 Farm machinery boffs are adamant that tractors are going to change, but exactly what they might morph into is still a bit of a mystery.

Several manufacturers have already had a stab at building semi-autonomous machines, but health and safety has so far been the big stumbling block.

However, few have actually made it to the stage of mass production – until now. McConnel’s Robopower is one of the first to be made available to buy. It is designed with digger-style tracks and an engine on top but, crucially, no cab.

Although it is called the McConnel Robopower and sold under that name in northern Europe, it is actually made by an Italian company called Energreen probably best known for its unusual self-propelled hedgetrimmers.

How is it powered?

A turboboosted Deutz four-pot under the hood runs a meaty hydraulic pump driving wheel motors on the twin tracks. There is a direct mechanical drive to the rear pto and oil flow spins the one up front.

What jobs can it do?

Pretty much anything, according to McConnel – the company has a range of attachments for its remote-controlled skid units from front-end loaders to grass rakes. However, most of these are designed for smaller 40hp Robocut machines.

The Robopower is mainly used with big, mulching flail mowers front and rear to keep things tidy on railway embankments and in motorway cuttings.

In theory, with 140hp under the hood, it could be used for any number of jobs and for our test we had originally planned to use it for knocking down silage grass with a set of mo-cos. However, without float for the spool valves we had to abandon that plan.

Instead McConnel kindly provided us with a three-leg grassland Shakaerator to trial the tracked machine’s pulling power.

How did it fare?

Setting out to heave up compaction in run-down silage-ground headlands, the Robopower immediately began to struggle with the ripper dropped in the ground.

But it was not the Deutz motor’s muscle that was the issue – even with its 5t bulk, the skid-unit scrabbled about and eventually ended up stationary with both tracks spinning. Cleated, ag-type or steel spiked tracks would certainly help sort that issue but it’s pretty clear that this ain’t no heavy draft load-lugger.

How do you control it?

With difficulty. It comes with a big remote control that hangs around the driver’s waist like a builder’s belt, but the banks of buttons are confusing to say the least.

It is particularly difficult when you have got the wannabe war-machine up to full chat (10kph) and you need to do a bit of manoeuvring. Here it swings about and is difficult to get it back on the straight and narrow. A more accurate directional joystick would improve things no end, though with a bit more practice the steering would probably get easier.

Is it a reality?

It is fair to say the Robopower is not ready for mainstream agriculture. But that is not to say it won’t be in the future.

For a start we think it needs GPS guidance to get the most from it. That way it could fit into a follow-my-leader system by doing lighter topwork behind a heavier-duty conventional tractor.

It could also fill the boots of a man and tractor for corn carting using a system similar to John Deere’s Machine Sync. It uses GPS waypoints to call the tractor from its waiting position on the headland to the combine spout once the tank is full.