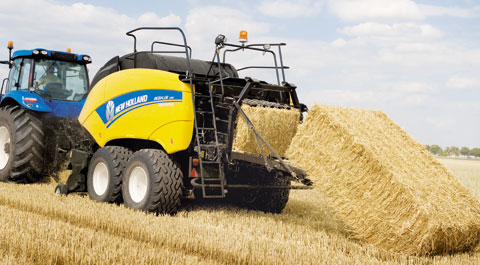 Stuff more in and do it faster. That summarises the basics of how engineers at leading agricultural equipment manufacturers are raising the productivity of an increasingly important arable machine – the big square baler, as Peter Hill discovers

With growers who sell straw wanting bales out of the way of stubble cultivations as quickly as possible and a burgeoning biomass energy market demanding efficient raw-material logistics, the latest crop of big square balers has a key role.

The sector is attracting new entrants as the battle for big square baler sales hots up. The Kuhn name now displays on the flanks of a four-model Large Square Baler range acquired from Kverneland Vicon a couple of years ago and three of those machines are also available in John Deere 1400 Series colours.

New Holland and Krone lead the charge for increased productivity with claims of up to 20% improvement coming from changes allowing their machines to work faster.

European-built New Holland BigBaler models, from the 870 (80x70cm bales) to the 1290 (120x90cm), have a heavier duty gearbox and larger diameter – but no heavier – flywheel generating 50% more inertia.

Coupled with a 14% increase in plunger speed to 48 strokes per minute, this allows the machine to be worked faster along the swath for increased output and daily capacity, while also producing bales up to 5% heavier than before.

The machines also get a stronger, more durable MaxiSweep pick-up with 6mm tines as standard; a chain-driven feed assist roll situated behind the roller windguard; and an improved pre-compression chamber with steering advice for an even fill.

A strengthened frame and a choice of single- and tandem-axle running gear within 3m overall width are also part of the upgrade.

Krone engineers lifted plunger speed on all but the smallest and largest BiG Pack HighSpeed balers from 38 to 45 strokes per minute.

This should push up output by about 20%, say the firm’s engineers, who also upgraded the Variable Feed System to deliver material faster.

Moisture recording and bale weighing are also possible, with results displayed on an Isobus-compatible terminal in the tractor cab. Krone claims +/-2% accuracy for the tail ramp weighing system, which uses a compensating sensor to take account of up and down movement affecting the result.

Krone’s iPack harvest chain management system adds further technology that allows job records to be setup on an office computer and sent to the on-board terminal. It will provide satnav guidance to the location and record the position, weight and moisture level of each bale, making it easier to store similar bales together.

An increase in bale density, which reduces the number that must be stacked, loaded, hauled and stored, is the main feature of the Massey Ferguson 2170 XD.

Packing 15-20% more material into each 120x88cm bale has been achieved by fitting a flywheel getting on for twice the weight of the standard model at 545kg. Plunger crank arms from the bigger MF 2190 120x128cm baler and a stronger gearbox cope with the extra loading.

But although larger diameter density control cylinders are used to provide added resistance in the bale chamber, the system needs less hydraulic pressure thanks to redesigned density panels.

Added bale density should be achieved with the 15-knife Roto Cut version of the Claas Quadrant 3300, which was introduced for this harvest to suit contractors and large growers wanting a 90cm deep, 1.2m wide bale.

Unlike previous Roto Cut designs, this one has knives arranged in a slide-out cassette for easier access – a feature added to the 120x70cm Quadrant 3200 Roto Cut.

These balers also benefit from a wider (2.35m) pick-up with a power feed system that adds up to 15% capacity, say Claas engineers, by achieving a clean flow of material into the baler.