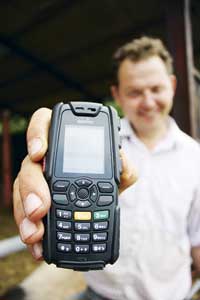 A rugged mobile phone that has software for monitoring and locating people working on their own could improve farm safety and bring peace of mind to employers and families.

The XP3 Sentinel phone is manufactured by USA specialist maker Sonim, which has been making rugged mobile phones under its own name (as well as for JCB and Land Rover) for several years. It is fully waterproof and can be dropped on to concrete from several feet up without damage.

What’s different about this phone is the software it comes with. It was developed by Sonim and Peoplesafe, a company that specialises in improving the safety of people who work alone in situations where there is a higher-than-average danger of having an accident or being attacked.

Sonim and Peoplesafe have now developed a service for farming, an industry where people are often working alone and where accident rates are high.

There are four main safety features on the new Sonim/Peoplesafe phone.

• Red alert mode. Press a prominent red button on the side of the phone for more than two seconds and the phone will call either the Peoplesafe Alarm Receiving Centre or a designated person such as a wife or manager.

• Man-down mode. The phone has an acceleromometer that detects how fast it is speeding up or slowing down, so it can detect falls and impacts.

Equally, it can be set to detect lack of movement for more than a preset amount of time, which could be important if you are working in a situation where there is a danger of asphyxiation.

• In any of these situations, the phone will automatically send an alarm signal to the receiving centre. The person at the other end of the line can then open a two-way voice channel.

That means that even if you could not physically reach the phone (for instance, because you had fallen off a ladder) but it was physically close, you could still communicate with the person at the other end.

• Safe-and-well mode. If you know you are about to have to do a job that’s particularly dangerous, you can alert the alarm receiving centre beforehand. They will then be on standby and ready to take action if you don’t call back to say you’re OK.

The phone also has a GPS receiver in it that sends your position (with an accuracy of about 5m) every three minutes back to the alarm receiving centre or designated person. So if you’re injured you can be located quickly.

All of this provides enormous peace of mind to the farmer or farmworker’s family and colleagues, points out Peoplesafe managing director Ian Johannessen. Equally, if you equip farm staff with it, it provides powerful evidence that you are meeting your duty-of-care responsibilities as an employer. It would also be worth contacting your insurer to see if it attracts a discount on premiums.

Cost of the phone is £296 and the call-monitoring facilities cost £10/month. More expensive than the £40 Nokia you can pick up from the local mobile phone shop, certainly, but probably not a lot to pay for the peace of mind of knowing that your family and staff are contactable and quickly locatable in the event of an accident.