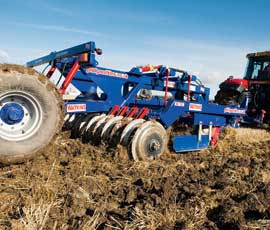 One of the great things about arable farming is that, generally, you get a fresh chance to remove any soil damage done in the previous year. But, given the appalling weather during the past few months, what steps should you be taking ahead of the autumn 2013 plantings?

From last autumn until now, the single most important factor that governed the extent of your soil damage has been drainage, says cultivation expert Philip Wright of Wright Resolutions.

“Good drainage has allowed the water/air balance to be restored rapidly following rainfall, even when field capacity had been reached. When a soil is wet, it is unable to deal with weight from traffic and there is increased potential for soil structure damage,” he adds. “So, as a first point of call, consider your drainage.”

In an ideal world, soil structure should be open enough to provide ease of movement for both water and roots, explains Mr Wright. “Structure tends to be open where there has been no traffic and ‘platey’ and closed where there is compaction.”

“Identify a part of the field you are happy with and dig down to identify a benchmark soil profile. Then dig on a headland or in a tramline to compare the damage.”

Cultivate only when the soil is in a friable state, or when it will fracture easily. “It may sound obvious, but if you can kick the soil and it crumbles, then it’s suitable for cultivation.”

The only process that benefits soil in these ‘plastic’ conditions is mole-draining, when you are after a smeared channel at depth.

“Last autumn and this spring’s deeper soil damage at depth hasn’t just been from tyres, it’s been from high-axle loads. Tyre and track manufacturers have done a brilliant job of creating new technology but it’s the axle weight that does more harm at depth now.”

Discs offer a relatively complex method of mixing and incorporating soil and trash. So you need to be aware that a high rake angle of discs is crucial when dealing with different soil moisture contents, says Mr Wright.

With any soil-engaging part, the steeper you set the angle, the more compression force is generated and the more compaction created.

“When discs are used in wetter conditions, they have steep or vertical rake angles and tend to compress, so ultimately discs are really more beneficial in drier conditions than wet ones,” he points out.

Tines operate differently. Here, the shallower the angle of the tine entering the ground, the better the lift and clod shatter. Conversely, the straighter the point, the more chance there is of clods being created by soil compression and smearing occurring.

“The geometry of a leg or tine is crucial. It needs to impart upward energy, however, as the amount of soil compaction at working depth increases, it can start to smear and compress the soil horizontally, causing severe soil damage.”

“Be careful to change tines when they wear, or at least adjust the machine to maintain the correct lift height through the soil, he adds. “By opting for carbide tips, at least you will maintain the lift height for the life of the part.”

“As a rule of thumb, dropping a subsoiler in two inches deeper will double the energy required to pull it – the question is do you really need to go deeper? Don’t go too much lower than the problem, otherwise you could actually make it worse in a wet time.

“In the worst-case scenario, if you have a heavy plastic soil and there is no weather window to work within, it could be worth leaving ground fallow. Put a deep, rapidly rooting cover crop in that will stimulate nitrogen and leave a high level of organic matter to work with for the next crop. It will also help sap the moisture from the soil, allowing it to shatter more easily.

“Please don’t leave stubble lying there damp until the next planting season, you’re wasting an opportunity to repair soils,” he concludes.

What tillage is really needed?

The first questions post-harvest may seem obvious but are worth keeping at the forefront of your mind, says Tim Chamen (pictured) of CTF Europe.

• Will soil structure benefit or be damaged by tillage and how will that relate to yield loss?

• What residue will it leave and is that likely to be a constraint?

• Do I improve or worsen the weed situation with tillage?

• After tillage, will the soil moisture and residue conditions provide a haven for pests?

Although Mr Chamen admits that, while compaction can’t be avoided altogether, subsoiling and cultivating at depth year-on-year is costly, the soil structure benefits are often shortlived and there is little evidence to suggest that there are any long-term yield benefits to be gained.

“It make more sense to manage compaction with traffic control which, although needing good planning, makes life simpler going forward,” he says. “Machinery is already becoming more in line with controlled traffic, but in the next 10 years there will be more compatible designs and better integration of existing machines to fit with different systems.”