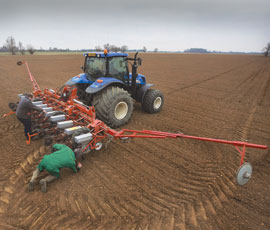 Many of the drills being used to plant sugar beet seed are pretty old and overdue for replacement, according to British Sugar’s Philip Ecclestone.

In an article in the latest edition of British Sugar Beet Review, he explains that growers still persevering with old drills may well be missing out on improvements in drill technology over recent years.

Accurate drilling and good establishment of between 80,000 and 100,000 plants/ha are vital foundations for good yields, points out Mr Ecclestone. Seed germination has improved dramatically in recent years and the UK’s 3600 sugar beet growers can expect to get an 80% or more establishment rate from a seed rate of 1.1-1.2 units/ha.


British Sugar did a study of the drills being used on UK farms in 2011. On average, 47% of the sugar beet area was drilled using fairly up-to-date precision drills operated by larger growers, grower groups or contractors.

Another 32% of the crop was drilled using an assortment of middle-aged equipment employing a range of technologies. This group represents growers with reasonably-sized contracts who could generally afford to update their drills and benefit from better accuracy and faster workrates.

The final 21% of the crop was drilled by growers using very old drills, some more than 40 years old. However very few of those farmers would consider drilling their cereal crops with a 40-year-old seed drill, points out Mr Ecclestone.

These growers liked having the flexibility of drilling their own beet crops but may soon have to reconsider this strategy as spare parts for old drills become increasingly hard to obtain.

A lot of these drills have not been manufactured for more than a quarter of a century and many of the small engineering firms in the UK and Europe that used to make them have gone out of business.

This group of growers will eventually have to replace those drills, either by buying a good secondhand model, grouping with other farmers to buy a new drill or switching to a contractor.

How do you decide on the right size of drill? Mr Ecclestone reckons that you should have a machine big enough to complete drilling within 10-14 days. Ideally beet drilling should start as near as possible to 1st March once weather and soil conditions are right.

The market for precision sugar beet drills in the UK is small but there are several manufacturers selling here. The best-known makes are Stanhay (sold by Grimme UK), Accord (sold by Kverneland), Unicorn (sold by Vicon), Monosem (sold by Toucan Farm Machinery), Herrieau (sold by Standen reflex) and Amazone UK.