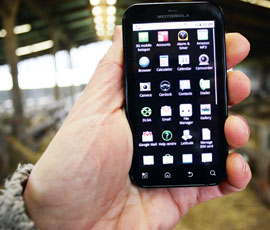 Is it time to trade in your trusty mobile for one of the new generation smartphones? David Cousins and Emily Padfield look at the pros and cons of upgrading.

If there’s one piece of equipment that has changed the way we farm in recent years it’s the mobile phone. This invariably battered and scratched item may not look very impressive, but in a poll a few years back farmers voted it the best farming invention since the tractor.

But technology rarely stays still and the new phones coming out of the factories of Nokia, Samsung, Motorola, LG, Sony-Ericsson and the like do far more than just make calls, ping texts back and forth and take dodgy pictures.

So welcome to the smartphone, a cleverer, more multi-talented version of the mobile phone that will probably replace it over the next few years. All the manufacturers are making them and prices, though currently high, will no doubt come down.

What is a smartphone? It can still make calls and do texts like your current mobile, but it also lets you send and receive emails and access the internet. It will also automatically connect to the wifi in your house (or anywhere else it’s available), potentially saving a lot of money on data costs.

It will have a high-resolution screen, a camera of a quality to rival standalone digital cameras, a music player and a radio. It will store your contacts, pictures, notes and anything else with an ease and stylishness that the traditional mobile phone never could.

It also will have a proper qwerty keyboard so you can finally say goodbye to the frustrating art of predictive texting. And it is increasingly likely to have a GPS receiver that can give you car-style satnav at little or no cost.

And, of course, there are the apps, those neat bits of software that give you a quick ways of getting anything from a local weather forecast to an update on grain prices or spraying advice. There is a downside, of course. The cost of these units ranges from £250 to £500 if you buy one on its own and put your own SIM card in, or expect to pay £25-£40/month on a contract if you want the phone to come for free or almost free.

And then there’s the small matter of durability. If your current mobile phone looks like it had an active role in the Battle of El Alamein and is now largely held together by Duck tape and hope, these new smartphones may not be for you.

Many are lovely-but-fragile items that do not like being dropped or sat upon. Their big screens are relatively easily scratched and some are very intolerant of moisture.

There are lots of good sturdy covers available, of course, from premium names like Otterbox down to cheaper versions in your local Currys Digital or Maplin store. For waterproof protection, Aquapac does a range of protection.

Interestingly, the launch of the first waterproof and dustproof smartphone – the Defy from Motorola – suggests that manufacturers are beginning to realise that some potential owners have active work lives that call for something a bit tougher.

Are these phones really that good for emails?

Yes they are. The Blackberry range is still reckoned to be the best of the bunch, with emails briskly pushed out to your phone as soon as they are sent. Other makes of phone will show your emails, of course, but often they either arrive in batches or you have to push a couple of buttons to prompt the software to send over the most recent ones.

What about accessing the internet?

Internet access has been available on top-end phones in the form of something called WAP for years. However, these were cut-down versions of the full website you’d see on a desktop or laptop computer with lots of the hyperlinks (the things you click on to get further info) removed to cut down on the amount of information having to be sent back and forward.

The current crop of smartphones have bigger processors and can handle more information, so the versions of internet sites you see aren’t too different from those you’d see on a desktop. They also have built-in software that allows you blow up text size easily, so the browsing experience, though still fiddly, is OK.

Can you really fit a full keyboard on a phone that small?

While some smartphones (Like the HTC Desire Z and the Motorola Milestone) have a neat pull-out keyboard with real keys, most use an on-screen keypad. Some people find these great to use, others hate them with passion. If you have big fingers or calloused fingertips, you may find these on-screen keyboards tricky to use, so try out a friend’s first before you commit yourself to a purchase.

Should I go for the biggest screen?

Not necessarily. It’s not so vital for emails, but a decent screen does make browsing the internet easier. One of the biggest screens on the market is probably the HTC H2, which is 94mm x 57mm. An iPhone is a bit smaller at 75mm x 51mm, while Motorola’s Defy is 82mm x 47mm.

The standard Blackberry screen, which measures just 50mm x 37mm, makes web surfing tricky, though the firm does make more expensive versions with bigger screens. If you want a really good-sized screen, go for an Apple iPad with its 198 x 149mm screen, but it’s not something you’d pop in your pocket.

Will these phones work around the farm?

Good question. While all these phones will automatically work off your home internet router and wifi, once you head out into the farmyard or fields you are at the mercy of the mobile phone data network. Calls and texts should be fine, but using the internet (for example) can be very variable.

Depending on where you are, you may get basic GPRS, the slightly speedier Edge or full 3G. Or you may get nothing, which rather defeats the purpose of having one of these phones in the first place.

So, if you think you want to access the internet from your tractor, it’s a good idea to find out which the best mobile phone network is locally. The simplest way to do that is to borrow friends’ smartphones that use Vodafone, Orange, O2, etc, and see which works best on your farm.

And just because your neighbour gets good coverage on his farm on a particular network, don’t assume you will.

We’re not experts on all this kit, so the most helpful advice we can give is to pass on what the experts have said. Computer and phone mag PC Pro did a comprehensive test of pretty much all the smartphones on the market a couple of months ago. Their favourite was the Apple iPhone 4 for useability, but they also liked the HTC Desire, HTC Legend and HTC Touch, the Google Nexus S, Blackberry Bold 9780, Motorola Defy and Samsung Galaxy.

Warwickshire farmer Nigel Hollick is a good example of a farmer whose diversification means he has a particular need for email access wherever he is. As well as breeding Limousin cattle and keeping North Country Mule sheep, he also rents out holiday villas in Montenegro.

Since most potential customers for those cottages want to communicate by email, the need for a mobile means of sending and receiving emails was obvious.

The Blackberry that he bought in October 2010 does the job fine, he says, and allows him to deal with customers wherever he is.

“It means I can give people an instant answer, which is what they want,” he says. “It’s also fine as a phone and I use it hands-free in the car with Bluetooth. It’s not so easy to read if you haven’t got your glasses, though.”

Though the keys on the Blackberry are relatively small, they are physical ones rather than the on-screen type and he says he finds them perfectly OK to use.

What about durability? “It’s been pretty lambing- and calving-proof,” he says.