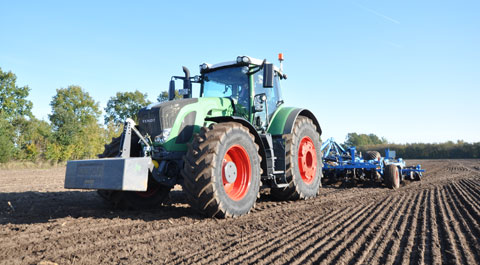 A joy to work with. Great driving comfort right up to 60kph. Clear controls, lots of adjustments possible. Deutz engine and Vario transmission seem to work in harmony. Test performance was above average in most areas except for AdBlue usage, which was on the high side. Base price* £236,549

It’s a bit of a squeeze getting to the driver’s seat past the passenger perch and the steering column, but the cab is roomy enough once you’re settled in. The folding buddy seat is a definite bonus, providing a flat surface to balance coffee, yoghurt pots and other goodies on.

Although the test team didn’t pick up on it in the field, noise levels were found to be the second loudest, with the DLG recording 77dBA.

Previous tests have highlighted the large computer terminal as one of the best around. The combination of a touchscreen and buttons is practical and the menu layout is clear. As for the hydraulic controls, a direct access key taking you through to the main adjustment page is missing, although there is one for linkage settings.

Operator visibility was average for the test group thanks to the low roofline. Alongside Valtra, Fendt is the only test participant with an optional, factory-fitted reverse-drive set-up.

The big, truck-sized steering wheel feels precise and gives just the right amount of feedback (three-and-a-half turns lock to lock, 13.7m turning circle). Independent brakes are a thing of the past, because the 939 is rated for 60kph.

During our tanker transport test the tractor impressed in the comfort stakes. Cab suspension was a little stiffer than the competition’s, but that’s no bad thing.

The Deutz engine performed to expectations without breaking any records. However, AdBlue consumption was particularly high, averaging 8% of fuel use in the test lab.

With 375hp maximum power at the pto, the Fendt was the most powerful tractor on test. Specific consumption at maximum output was 230g/kWh – 5g/kWh higher than the test average. On top of this it guzzled about 26g/kWh of AdBlue.

However, the figures were far more acceptable when it came to the crucial six-point partial loading test. The 939 returned a 229g/kWh average compared with 243g/kWh for the thirstiest tractor – but bear in mind that 26g/kWh of AdBlue has to be added.

At 266g/kWh, diesel consumption at maximum draft (324hp) was pretty average for the tractors with stepless transmissions (although AdBlue use rose to 30g/kWh).

On the joystick there are two engine speed presets. Revs can be programmed and adjusted via the Vario terminal, as can pto speeds, hydraulic functions and driving set-up through Fendt’s Tractor Management System (TMS). There is still a classic hand throttle, though.

Fendt’s trademark Vario stepless gearbox proved itself in testing and scored points for ease of operation. But there are still two mechanical ranges that have to be selected according to the work in hand. These can be changed without the clutch, although not under full power and 60kph is reached at a sedate 1,750rpm.

TMS automatically takes over the moment you set off, constantly working to try to maximise engine/transmission efficiency. The driver can choose between pedal mode, joystick or independent manual control of both engine and gearbox. Driving direction can be selected via the joystick or shuttle paddle on the steering column.

The reverser set-up is strange. The paddle-switch is tiny and lacks a neutral position or parklock. Instead there’s an N button in the control cluster on the armrest and a hand-brake.

There are two speed presets on the joystick. Acceleration can be selected with a four-way thumb toggle, also on the joystick – it’s all standard Fendt stuff.

Overall, the engine and transmission work well together, providing a level of sensitivity that allows the tractor to be driven with a good degree of precision.

For both four-wheel drive and diff-lock there is one button for automatic activation and one for permanent drive. Press once for on and twice for off.

In auto mode both are activated according to steering angle and speed. It doesn’t get any simpler than that.

At 9.4t, lift capacity is a little below the test group average, but sufficient for most tasks. The 939 is very light (10.6t) in comparison with its rivals, but load carrying capacity is still perfectly acceptable at 5.4t (or, when limited to 50kph, an impressive 7.4t).

The linkage control system is packed with loads of gadgets. The link arms are double-acting, there’s automatically activated linkage damping and lift and lower speeds are set automatically, too.

Though otherwise well designed, the set-up had one weak point. Stopping midway through the lift arc can only be done by pushing a separate stop button, but this is hidden between the operating levers.

While a depth control dial is provided, we would have liked buttons (linked to the external fender controls), too, for more precise control during implement attachment. But we liked the fact that the linkage can be operated with the joystick and that there is a red stop button.

All further linkage settings are found through the terminal. The menu is clear, with direct access to the adjustment menu by touchscreen. However, the lift height limiter can only be set to kick in at the point where the link arms are 30% of the way through their lift range.

That was almost too high for our lower-link-mounted trailed drill and we were in constant danger of causing serious damage to the pto shaft.

With 87 litres of oil available, a maximum of 211 litres/min and 144 litres/min flow per valve, there are really no complaints in this department. Up to six valves (plus two up front) can be switched via the monitor between fingertip paddles, a stubby cross-lever, two sets of buttons on the joystick or the external controls on the rear mudguards.

Great as this sounds, the driver has to keep a close eye on which is which, as the colour-coding no longer matches up (the red lever can be switched to handle the green spool couplings, for example). However, the simple press of a button returns everything to the original factory settings.

Individual valves can be locked, a control button on the armrest then allows operation only of the activated valves. One timing function covers both in and out on the valves.

Annoyingly, the timing function is only activated when, on starting the engine, “settings reset” is selected on the monitor. A useful function for trailers with steering axles is that individual valves can be locked the moment the tractor is flicked into reverse.

A yellow button on the jelly-mould-style linkage control triggers soft-start engagement. Alternatively, the driver can transfer this function on to the “Go/End” button on the joystick.

Automatic engagement only works via the joystick controls. Auto function settings can, somewhat awkwardly, be altered via the small display on the instrument panel. However, programming it into the headland management system is actually the simplest route.