We’ve picked out a few of the highlights, which include a six-wheel drive Toyota Hilux, a hardcore version of Volkswagen’s Transporter van and two chippers – one self-propelled and with a 770hp engine, the other towed by a tractor and still capable of chewing through up to 30cu m/hr. 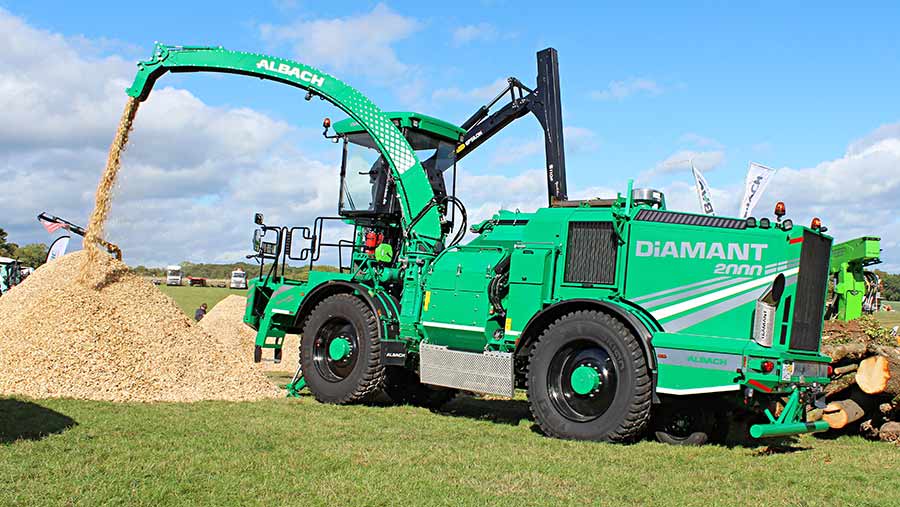 Such is the demand for wood chip these days that Welsh contractor DG Forestry has invested in its third high-output self-propelled chipper.

These German-built Albach Diamant 2000 machines can chew their way through seasoned cordwood at a rate of up to 100t/hour, with the ability to produce microchip, all the way up to chunky G100-grade material.

These get used for anything from livestock bedding and poultry litter to powering biomass boilers and wood gasification units. The firm works for a range of customers that have their own timber supply and it can process anything from round timber and slab wood to whole trees and brash.

The machine pictured is fitted with a 770hp Volvo six-cylinder engine which powers a 12-knife chipper unit fed by an integrated crane. The firm’s two other machines are based on the same platform, but have 600hp and 700hp engines and a six-knife drum.

According to DG Forestry, the appeal of Albach chippers is that they have a much larger output than a tractor-powered unit and they produce a higher quality chip. They’re also able to travel on motorways, which allows the firm to cover most of the country. They’re worth more than £600,000 each. 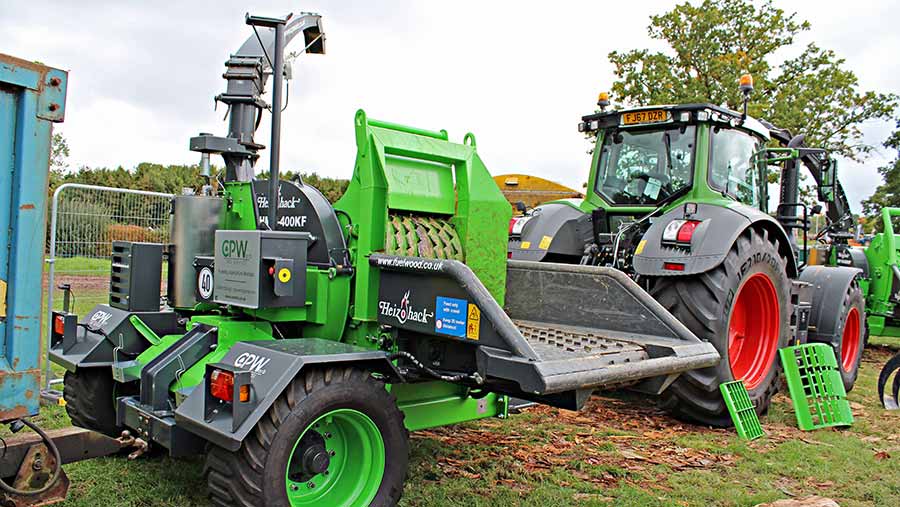 The crane-fed chipper can process most wood waste, such as sawmill offcuts, beams, logs, blocks or branches up to a maximum diameter of 400mm. Thanks to a large flywheel, it needs relatively little power up front and most 100hp tractors should be up to the task.

A 400mm x 708mm feed-in opening means multiple pieces of timber can be loaded at the same time, before a steel conveyor belt and pressure roller pull it into the chipping drum. Altering the feed speed and changing the sieves allows various different chip sizes to be produced. 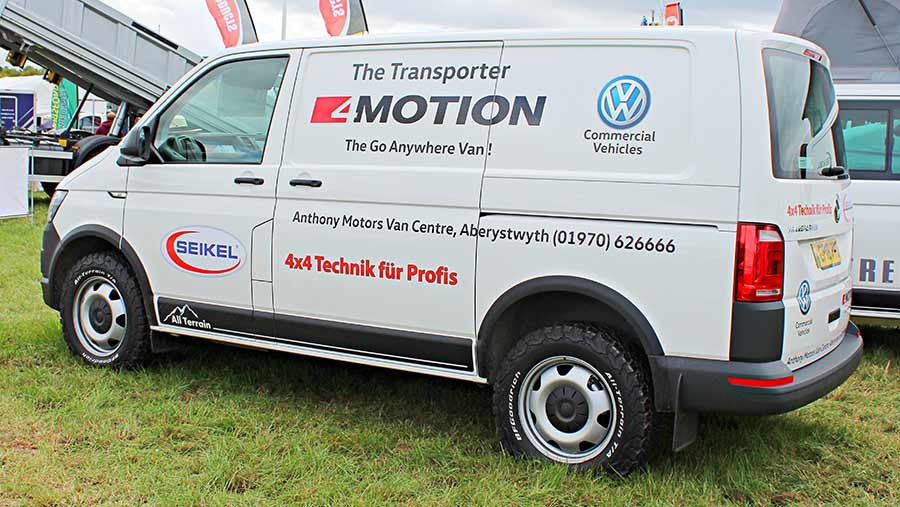 Seikel UK’s Transporter All-Terrain started life as a standard T32 4-Motion van, before the firm lifted and uprated all the suspension and added larger BF-Goodrich All-Terrain tyres. All the suspension parts come from German parent company Seikel, and unlike many retrofit parts they are officially approved by VW.

Together, the 30mm suspension lift and larger-profile tyres give the van an additional 60mm ground clearance over the standard model. The kits can also be retrofitted to any four-wheel-drive VW van.

Crucially, the firm always specs a donor van with factory-installed diff-lock as this can’t be installed out of the factory. This manual locker for the rear axle apparently massively improves the performance of the Haldex-based four-wheel drive system and is often missed by those buying a new van.

The T32 model pictured is the highest rated of the Transporter vans, with a 2.5t towing capacity and payload of about 1.1t. It comes with the entry-level Startline trim, two-litre TDI engine that develops 150hp and a six-speed manual gearbox.

List price for the above is about £28,500 before adding extras such as sump guards, rock sliders for the sills and a snorkel. There’s also the option of fitting a reduction gearbox to give a lower first and second gear for towing and tougher off-road terrain. 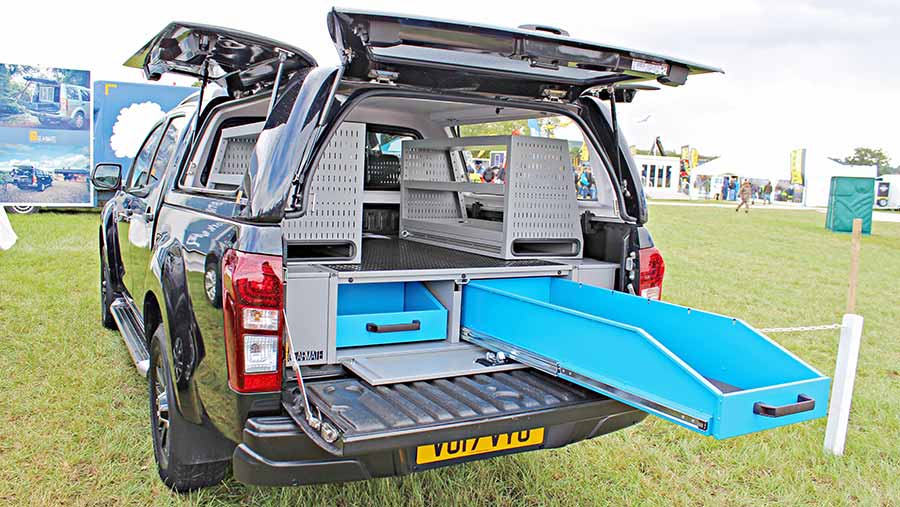 Gearmate, based just down the road from the show at Alcester, Warwickshire, was showing a particularly neat set-up that sits underneath its own hardtop, which it sells for between £1,320 and £1,880. These can be specced with gullwing openings, sliding windows or fully sealed sides.

Buyers can also have them colour coded to suit the pickup – shown here on an Isuzu D-Max Utah – and locks and lights are standard.

The company’s twin-drawer system fits all pickup models and can be ordered with depths of 226mm, 300mm or 500mm. The kit pictured is made of mild steel and the 200kg-capacity upper deck slides out to 75% of its length.

These systems don’t come cheap, though – list prices for the Opus system include £799 for the drawers, £200 for two in-fill pods that provide extra storage at the sides and £299 for each of the racks.

The company also offers kits for the backs of Land Rover Discoverys, Defenders and other 4x4s. 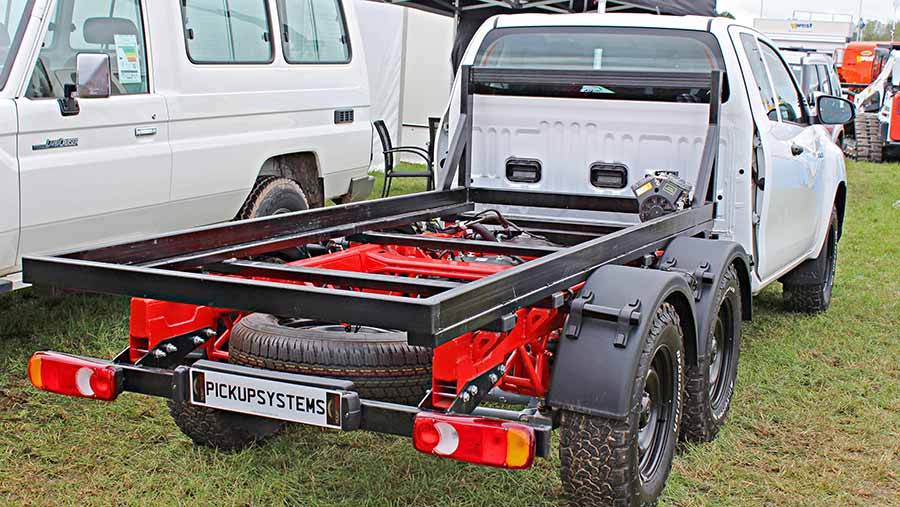 One of the wackier vehicles at the show was a go-anywhere six-wheel drive version of Toyota’s Hilux.

The £50,000 chassis kit is developed by Pickup Systems, which specialises in fire and utility vehicles.

It fits underneath any Hilux cab – the company says it picked Toyota’s pickup as it is the biggest-selling truck outside of North America – and uses the standard 2.4-litre engine and front axle. The rest of the rig is built as new, rather than a cut-and-shut job.

A little compressor manages the air suspension – a set-up that Pickup Systems says is lighter than leaf springs and provides much better axle articulation. Air cushions are also load-sensing, so the rear deck can stay in the same position no matter how much weight is thrown onto the rear deck.

In all, the pickup weighs 2.5t, has a payload of 3t and can still tow the 3.5t that farmers crave.

The conversion job takes about 70 hours and the company says the British military provides one of the biggest potential markets – apparently it’s a perfect replacement for its long-in-the-tooth Pinzgauer machines when it comes to carting around eight war-ready people in the back. 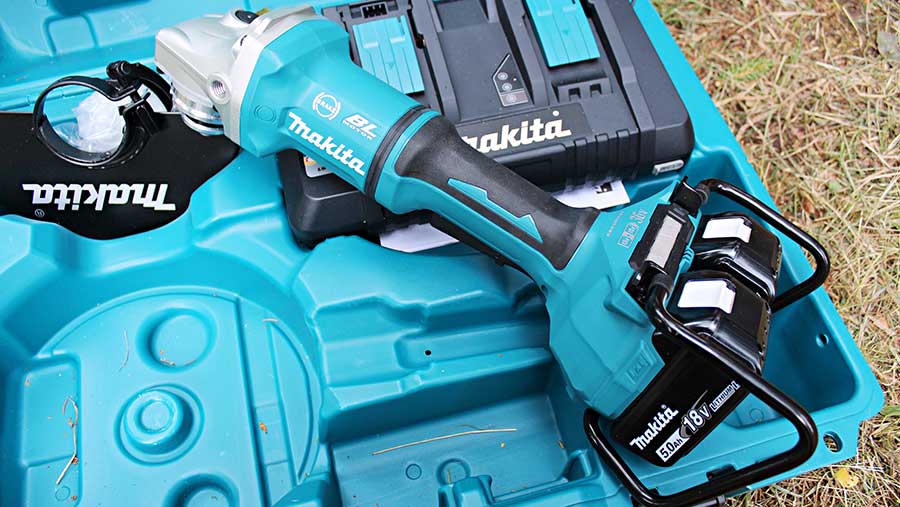 It seems that even the most power-hungry of handheld tools are turning over to battery power.

This latest hefty-duty 9in (230mm) grinder from Makita uses two of the firm’s 18V battery packs connected in series to give an output of 36V.

These power a brushless motor with a torque-sensing system that automatically changes the cutting speed according to the load. There’s also a safety system that shuts down the tool if the rotation speed suddenly slows.

It’s compatible with all of the maker’s 18V battery packs (which have capacities ranging from 3Ah to 6Ah) and it has a no-load cutting speed of 6,000rpm – only 600rpm slower than its mains-powered 9in machines.

The bare tool will set you back about £250 and the top-end 6Ah batteries cost about £100 each.

Makita is also using this 36V technology for its range of professional cordless landscaping equipment, including brush cutters, hedge cutters and leaf blowers. 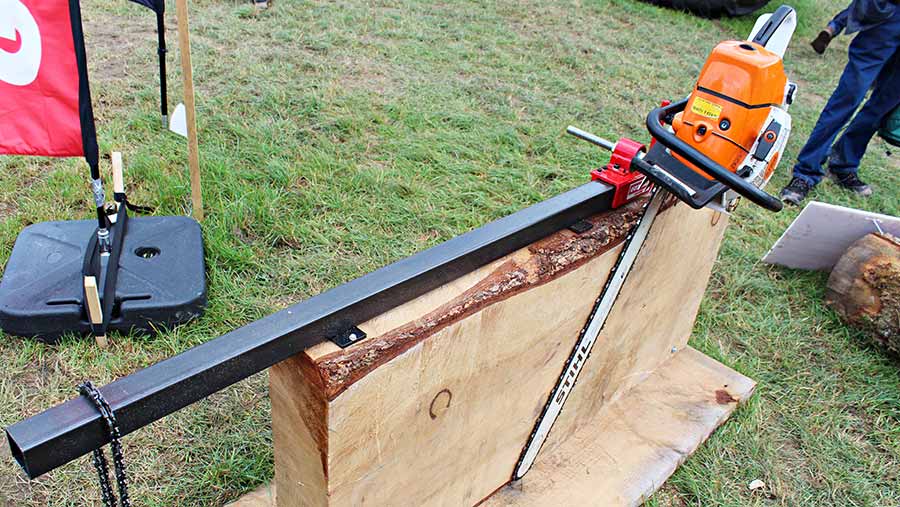 Irish firm Go2Mill was showing its nifty mini mill, which attaches to a chainsaw to produce die-straight timber cuts without having to invest in an expensive gantry system.

The chainsaw fits to the patent-pending guide unit via an 8mm or 10mm thread that is attached at its other end to a bearing that allows the saw to pivot. An adjustable bolt on the thread allows the position of the saw to be tweaked to suit the desired cutting width.

The guide runs on a 50mm x 50mm wooden or steel running rail that is fixed on top of the timber to be sawn.

Once the first cut has been made, the guide and chainsaw can be turned around to cut the other side of the timber to produce the two straight sides of a plank.

A jacking screw in the top of the guide allows the bearing housing to be lifted up or down to tweak the alignment with the beam.

It costs £195, but you’ll also need your own chainsaw. 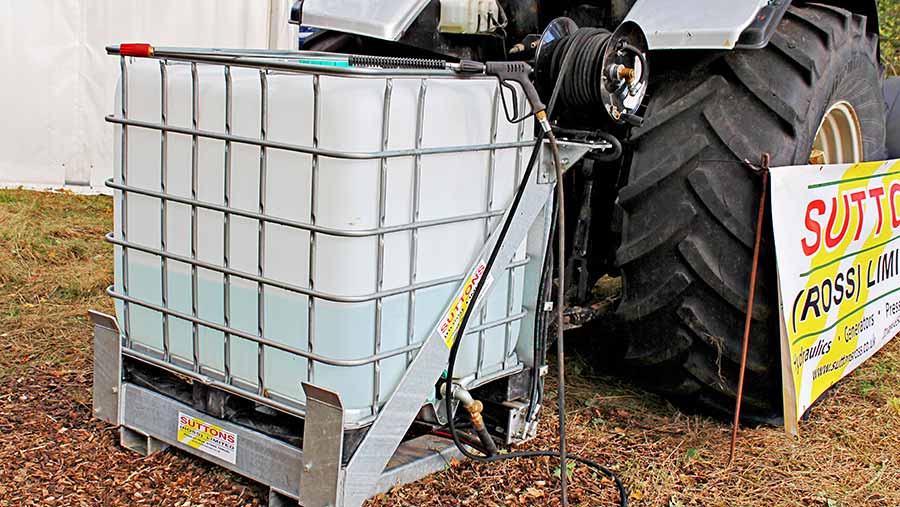 Pressure washing needn’t be limited to the closest tap or power supply, thanks to this mobile unit from Ross-on-Wye firm Suttons.

It’s based on a 1,000-litre IBC mounted on a heavy-duty galvanised frame, with slots so that it can be carried on pallet tines as well as attachments for a three-point linkage.

The pressure washing function comes courtesy of a 21-litre/min pump connected to a hydraulic motor that gives an output of 180bar (2,700psi). Optional extras include a retractable hose reel and a dirt-buster turbo nozzle.