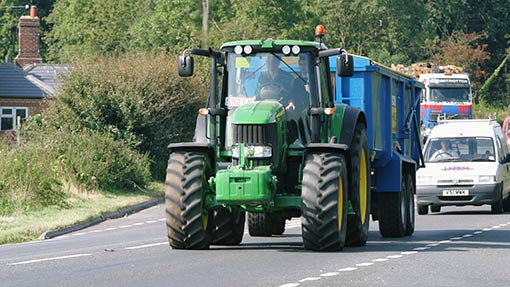 The maximum speed limit for conventional tractors will rise by 5mph to 25mph (40kph) from March, the government has announced.

And the maximum combined weight limit for tractors and trailers will increase from 24.39t to 31t.

But the changes would mean farmers could carry more produce in each journey, especially at harvest time.

Ms Perry said the changes would deliver benefits of almost £62m to agriculture each year in deregulatory benefits to “bring our farmers more in line with their international counterparts”.

She added: “These changes will also result in farmers having to make fewer journeys on our roads and so reduce the risk of accidents.”

The NFU welcomed the new rules as a “step in the right direction”. But the union, which has been campaigning for tractor and trailer weights to increase for a number of years, urged the government to go further.

The second phase of changes will see a further consideration of increases in weight and speed limits and a roadworthiness test for some agricultural tractors and trailers by summer 2016.

NFU vice-president Guy Smith said: “I’m sure many people who’ve found themselves caught in a queue of traffic behind a tractor will have sympathy with our calls to reduce the number of tractors on the road by increasing their effective payload.

“While an increase in speed limit to 25mph is welcome news, the benefits will not be as great as a meaningful increase in the effective payload.

“While an increase to 31t is a step in the right direction, keeping the specific limit of 18.29t on the trailer will continue to restrict many trailers from being used at anywhere near their safe engineered design capacity.

“To achieve a change which fully reflects improvements in technology, including those that improve safety, it is essential that weight limits are increased further to the level suggested by the industry. “

According to the NFU, farmers had to drive an extra total 5.8m miles on average to bring in the harvest legally. But if tractor weights had been increased to 33t this wheat harvest, journeys could have been reduced by roughly 46%.