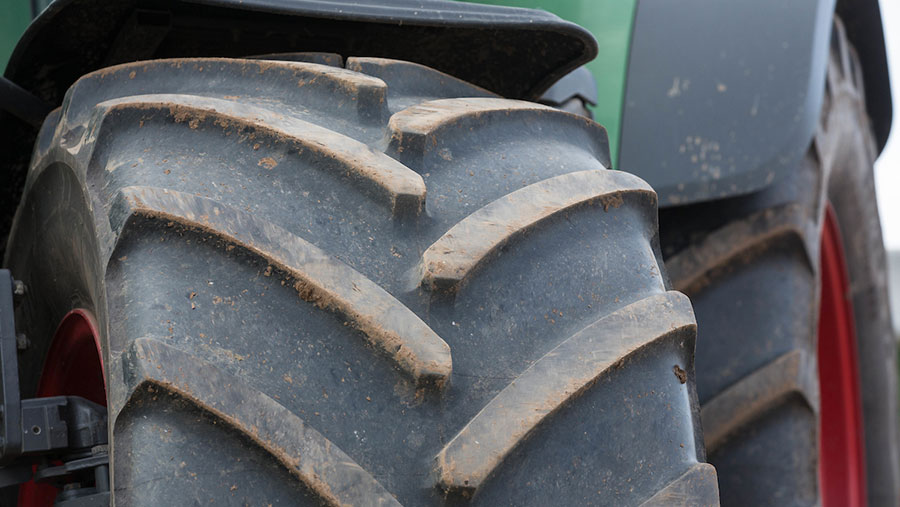 We all know that tyre pressure is important if a tractor is to work at its best. But only a few operators, it seems, actually bother to ensure that correct pressures are employed, as Andy Collings reports

Running tractor tyres at the wrong pressures can have a dire effect on tractor performance, tyre wear, and soil compaction. And that can have a severe financial impact on your wallet.

Yet, in an industry which employs ever more powerful tractors, the very means of using this power efficiently is frequently neglected. It’s worth considering some facts.

So, taking into account the losses that also occur from transmissions and ancillary equipment such as alternators and water pumps, a 210hp tractor could have available just 115hp to provide tractive force.

Let’s look at a few basics. A tyre’s footprint – ie the area of tyre in contact with the ground – is, for any given tyre, dependent on the air pressure within the tyre. And a tyre’s inflation pressure is very similar (though not identical) to the ground pressure exerted by the tyre. The difference is in the support provided by its construction.

So if a larger footprint results in greater traction, less wheel slip, less fuel use, longer tyre life, greater output and less soil compaction, then you might assume that getting the lowest pressure possible would be the aim.

And remember that while there is an optimum footprint, the load on a tractor’s tyres is a constantly changing factor – the action of draft control when ploughing, for example – so, as in all these matters, it is a matter of creating the best compromise.

In fact three factors have to be considered if you are striving to create the optimum tyre footprint – tyre size, load and inflation pressure. This is not a detail lost on tyre manufacturers who print out long tables with data on tyre sizes, maximum load weights, speeds and pressures.

It may seem pretty mundane but the valve dust cap plays an important part in protecting the valve from dirt ingestion. All valves leak slightly and the dust cap with its rubber seal can prevent this air loss.

These tables may not amount to compulsive reading but it’s worth having a look and trying to understand the information supplied. Take the example of one of Firestone’s 70 Series tractor tyres, the 520/70 R38 150 A8.

The figure 520 refers to the tyre section width in mm. The 70 is the aspect ratio in % (the height of the sidewall divided by the tyre’s width). Meanwhile R tells you about the tyre’s construction – this is a radial.

The 38 is the rim diameter in inches, 150 is the index indicating load carrying capacity and A8 is the speed symbol (A8=40kph).

A look across the chart reveals that, with the pressure set at 11.5psi, this tyre is allowed to carry a maximum of 3150kg when travelling at 10kph. Increase pressure to 23psi and its load can be 4355kg at 10kph, increase speed to 40kph with 23psi tyre pressure and the maximum load allowed reduces to 3350kg.

So what are the consequences of getting it all horribly wrong and running with an incorrect tyre pressure for a given loading?

A tyre operated at 10% below the required pressure can need changing at intervals 15% shorter than they should be.

In the short term, unless the pressures were wildly over or under their recommended levels, the immediate visual consequences will be negligible.

However, the long-term prognosis is not so good. Tyre makers say that a tyre operated at 10% below required pressure will suffer a 15% reduction in its life expectancy.

What about over-inflation? The most immediate effect here is poorer operator comfort – the tyre cannot flex properly to provide suspension. The knock-on effect is increased wear and tear on both vehicle and tyre, reduced tyre life and increased fuel consumption – not to mention increased ground compaction.

The penalties for running a tyre in an under-inflated (or overloaded) state are probably more severe than over inflation. A tractor used on the road with tyre pressures set too low for the load being carried will start to wear its lugs. Not uniformly, though – the backs of the lugs will wear down first.

In more general use, unbalanced wear and side wall creasing can be expected, but the most immediate and costly damage is bead slip. The bead slips against the rim, heats up and effectively destroys the bead – and the tyre as a result.

Bearing in mind the relatively low pressures involved, 20% can be a very small change in a psi reading on a pressure gauge.

The message is that it pays handsomely to look after tractor tyres by making regular pressure checks – at least every week – and to take into consideration what type of work the tractor will be doing and, as a result, the load each tyre will be carrying.